Services: How to Boost Trade and Shrink the Deficit at the Same Time

Chances are you do not work in agriculture or in manufacturing. In fact, four out of five jobs in the United States are in “services,” and 75 percent of U.S. GDP is derived from services. Worldwide, the numbers are only slightly less impressive. A majority of global employment is also in services. Roughly a quarter of the world works in agriculture and slightly less in manufacturing. In the United States, the numbers are much smaller: as of 2015, only 1.63 percent of the U.S. labor force worked in agriculture.

Nevertheless, when politicians and the media talk about trade, they almost always talk about industrial workers, farmers, and the U.S. trade deficit. Recent CSIS coverage of the trade war has focused on automobiles, motorcycles, soybeans, dairy products, and other goods produced in factories or on farms, for example. President Trump has focused most of the trade rhetoric on farmers and U.S. manufacturing as well—and, of course, the president’s primary motivation when he launched the first round of tariffs was reducing the U.S. trade deficit.

Q1: Why do services get ignored when politicians debate how trade can help or hurt workers?

A1: Politicians likely ignore the services sector when they talk about trade for a few reasons. First, the agricultural and manufacturing sector are well organized and have lobbied the government for decades. “More than 130 commodity groups and agribusiness giants” sent letters, made phone calls, and submitted public comments to the Office of the United States Trade Representative (USTR) during the Trump administration’s negotiations to update the North American Free Trade Agreement (NAFTA), for instance. Likewise, union membership rates are typically higher for workers in the manufacturing sector than in private-sector services jobs. In 2017, 9.1 percent of the manufacturing sector was unionized (down from 14.9 percent in 2000). The equivalent share for professional services was 2.3 percent . There are exceptions to this trend—teachers and public sector workers are disproportionately unionized—but America’s major labor unions still devote a lot of their energy to protecting the manufacturing sector.

Q2: Can services be traded? Or are industrial goods and farm products the only things that can be sold from one country to another?

A2: Services can indeed be traded, and the United States is the world’s most successful services exporter. This is a somewhat abstract thought; trading goods like soybeans or cars is easy to grasp, but what does it mean to trade services?

A few examples might be useful. Some of the most common services exports include travel and tourism, transportation services, financial services, and information, communication, and technology services. For instance, if a foreign family decides to vacation in the United States, they consume U.S. tourism services (nights in hotel rooms, dinners at restaurants, etc.). They might also fly to the United States on a U.S. airline, consuming a transportation service. If they pay for any of this by credit card, or if they buy travel insurance, those too could be counted as U.S. services exports (depending on the companies involved). Some services cannot be traded from one country to another: when you get your hair cut, for example, the barbershop or hair salon sells its services to you. It’s unlikely you will cross the border to import that haircut (although there are exceptions to every rule). But in general, as time goes on and technology shrinks the distances between people, services make up an increasing proportion of trade.

In 2017, the total U.S. trade volume was $5.25 trillion (imports and exports). Of this, services accounted for $1.34 trillion or just over a quarter of total trade. The United States is the largest single-country exporter and importer of services on the planet (15.2 percent and 10.3 percent of the global total). And these numbers might underestimate the importance of services in U.S. trade. John Calverley, an economist, estimated in 2015 that measuring trade in value-added terms (rather than conventional terms) would show services account for 45 percent of global trade flows (as opposed to 20 percent).

Q3: If services can be traded and represent the U.S. economy as a strength, how can the administration accelerate trade in services?

A3: The baseline agreement for trade in services is the General Agreement on Trade in Services (GATS). GATS—entered into force in 1995 along with the World Trade Organization (WTO)—covers all WTO member states. But various regional or plurilateral trade negotiations since 1995 have included chapters on services liberalization.

These chapters are often more complicated than trade agreements that focus on traditional goods because the barriers to trade in services are often “behind the border.” Goods face tariffs when they cross borders, and tariffs can be raised or lowered. But the biggest impediments to freer trade in services are regulations like local content requirements, restrictions on data flows, or licensing and certification laws.

Q4: What are some examples of trade agreements—either concluded or in on-going negotiations—that address services directly?

A4: Services are addressed specifically in a number of trade agreements, both existing and under negotiation.

The Trade in Services Agreement (TiSA) is a plurilateral agreement being negotiated among 23 WTO members. As its name suggests, TiSA is exclusively focused on liberalizing trade in services. The United States and Australia have led most of the discussions, but more notable is perhaps who is not participating: Brazil, India, China, and other emerging economies that tend to place severe barriers on services.

Several issues have emerged with TiSA. First, TiSA negotiations are being undertaken on a non-most-favored nation (MFN) basis, and any barriers that TiSA scrapped would not be extended to the WTO members who don’t participate in (or aren’t invited to) the negotiations. This reduces the impact liberalization might have. Second, the European Union has refused to budge from its positions on data movement and protection, which represent a major challenge to services trade. The recent GDPR law that the European Union adopted emphasizes Europe’s commitment to restricting data flows and protecting their citizens’ data privacy. Third, the negotiations have been on hold since President Trump was elected, waiting for the administration to clarify its position. In March, U.S. Trade Representative Robert Lighthizer told a Senate Committee that the USTR Office was studying whether TiSA was the best vehicle for liberalizing trade in services, or if the United States would have more success “in specific groups of like-minded people who actually have the desire to move forward in that area.” We discuss how examples of these smaller groups have dealt with services below.

In July, Ambassador Robert Holleyman, a former Deputy U.S. Trade Representative told a Congressional Committee that TiSA would not be the most efficient way to address barriers to trade in services and that the United States should instead rejoin the Trans-Pacific Partnership (TPP) and adopt its provisions on services. TPP liberalized Cross Border Trade in Services, E-Commerce, Financial Services, Telecomms, and Temporary Entry, and set uniform standards in its Intellectual Property chapter. Some of these rules have changed after the United States withdrew and the TPP became the Comprehensive and Progressive Agreement for Trans-Pacific Partnership (CPTPP). The length of patent protections for biological drugs has been reduced for instance—after the United States had pushed for longer periods. But the majority of the CPTPP mirrors the original TPP agreement and would help reduce barriers to trade in services.

NAFTA, when it entered into force in 1994, contained chapters on Cross Border Trade in Services, Telecomms, Financial Services, Temporary Entry for Business Persons, and Intellectual Property. More important, NAFTA pioneered how Free Trade Agreements (FTAs) approached services by using a “negative list” where all services would be considered fully liberalized unless specifically excluded. For a field like services, where advances in technology increase what can be traded, negative lists expand liberalization over time.

The Trump administration recently negotiated the United States-Mexico-Canada Agreement (USMCA), a modernized NAFTA with Canada and Mexico. The agreement increases market access for U.S. firms (especially financial services firms, who benefit from the agreement’s ban on data localization requirements if government regulators can access the data). The USMCA also contained a whole new chapter on Digital Trade—a subject that barely existed when NAFTA was first negotiated and signed in the early 1990s. Nevertheless, the bulk of media coverage focused on local content and wage requirements for automobiles.

Once again, it might feel like tangible goods are taking up most of the bandwidth even though services offer a better opportunity to use trade to boost exports, grow the economy, and potentially shrink the trade deficit.

Buy American vs. Strategic Autonomy
June 28, 2021
In the News

Women and Trade: How Trade Agreements Can Level the Gender Playing Field
By William Alan Reinsch
May 27, 2021
Commentary 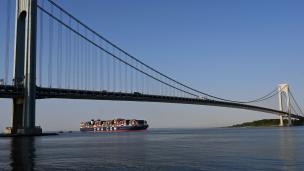 The More Things Change, the More They Stay the Same?
By William Alan Reinsch
May 24, 2021
View all content by this expert