Sizing Up the OPEC Meeting—An Agreement That Had to Happen, but Still with Uncertain Consequence

As expected, today’s meeting of the Organization of Petroleum Exporting Countries (OPEC) concluded with an agreement to reduce oil output once again to “stabilize the market” and hopefully stem the price erosion that has plagued oil markets for the past several weeks. The agreement (the contours of which were outlined in our OPEC’s Dilemma commentary of November 13) calls for OPEC members to reduce production by some 800 thousand barrels per day (from October levels) on January 1 and calls for additional reductions (on the order of 400mb/d) from Russia and other non-OPEC participants. The official OPEC communique stipulates that the agreement will run for six months and be reviewed at the April 2019 meeting. No specific country allocations were immediately available although (see chart below), Saudi Arabia, Kuwait, Iraq, and the UAE are expected to carry the bulk of the OPEC-led reductions. Russia presumably will shoulder the majority of the non-OPEC burden, although the details of their reductions are likely to be phased in due to complications with throttling back output during the winter months. 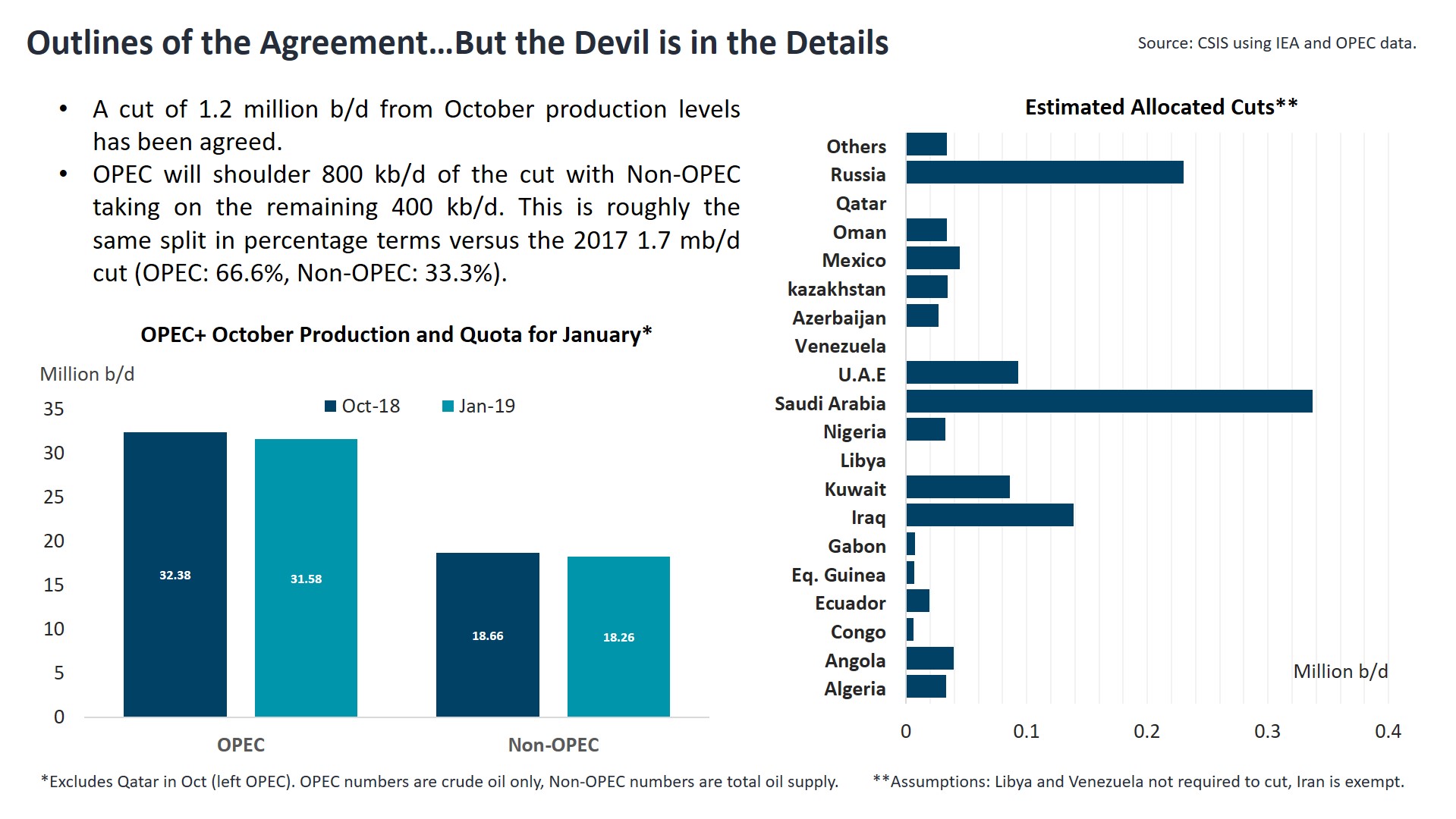 Iranian output is unlikely to be impacted by the agreement, but rather, could contribute to an overall OPEC reduction by virtue of ongoing U.S. sanctions. Qatar’s withdrawal from OPEC, effective January 1, could also provide additional flexibility from OPEC’s perspective but adds to global non-OPEC supply. Libya and Venezuela were exempted from the reduction decision.

The OPEC decision was taken against a backdrop of economic and political uncertainty and complex challenges. On the economic front, the threat of continued oversupply (occasioned by rising output from the United States, Saudi Arabia and Russia—along with a surprising surge from Libya and continued exports from Iran) coupled with dampened projections of global economic (and oil demand) growth were poised to recreate global oil surpluses in 2019. Politically, President Trump’s unrelenting assault on OPEC (see Trump Lambasts OPEC) to reduce oil prices and complications stemming from the murder of Jamal Khashoggi, including reinvigorated efforts to resurrect the No Oil Producing and Exporting Cartels Act (NOPEC), combined to complicate the road forward for senior Saudi decisionmakers. Inevitably (in our estimation), however, Saudi Arabia had little choice but to address the growing market instability. And the worst may not yet be over.

Prior to today’s OPEC decision, market forecasters (e.g., OPEC, EIA, IEA) all projected growing surpluses for early (Q1 into Q2) 2019 and a recreation of excess inventories. Prospects of continued growth in the United States—heading towards 12 million barrels per day (mmb/d)—and elsewhere were poised to counterbalance losses around the globe even as the threat of persistent trade wars were seen to pose a drag on demand growth. Additionally, seasonal and structural challenges, like the refinery maintenance season and the completion of needed infrastructure buildouts in the United States were expected to exacerbate the imbalance. And since the new agreement carries a January 1 effective date, loadings between now and the end of the year, which are not subject to the new targets, are scheduled to arrive in in ports during Q1.

Today’s OPEC announcement is likely to put a decidedly wobbly floor under current oil prices, but depending on its implementation, timing and enforcement may yet be insufficient to stabilize the market at an acceptable price level. The steep decline in oil prices since October has also eroded company stock valuations and caused a re-evaluation of drilling budgets and outlays going forward. Current price hedges are scheduled to expire this spring, and fewer companies have hedged production going forward into 2019. Tax considerations on inventory management may also become a factor as we end the year, although the OPEC announcement may induce money managers to be a bit more inclined to be buyers rather than sellers. As evidence of the latter point, oil prices rose 5 percent today (Brent to $63/b) as a result of the OPEC announcement.

OPEC is scheduled to reconvene next spring but will undoubtedly continue to re-evaluate market conditions in the interim. Failure to rein in the growing supply imbalance may well necessitate further and more painful action in the not-too-distant future—at which time, continually changing economic and geopolitical events, and dynamics may prove even more challenging.