A Smaller, Wealthier Mexico Is on the Horizon

For the past half century, powerful trends have been shaping Mexico’s population, its economy, and its relationship to the United States. Lower birth rates and freer markets have led to a sustained drop in Mexicans moving north to find work, developments that will reshape the immigration debate in the United States. Meanwhile, the passage of the North American Free Trade Agreement (NAFTA) in 1994, combined with Mexico’s entry the same year into the Organization for Economic Cooperation and Development (OECD) has transformed its economy and slowly made its citizens better off. By 2055, Mexico will be smaller, wealthier, and with citizens less prone to leave their country. These fundamental trends may be thwarted by changes of government policies in the United States and Mexico, but they are unlikely to stop for the remainder of the twenty-first century.

In the early 1960s, Mexican families looked nothing like those in the United States. For starters, they were much bigger. Mexican couples married earlier, rarely divorced, and had far more children than their U.S. counterparts. The number of births per Mexican woman during her childbearing years (the total fertility rate, or TFR) was almost 7 children, compared to less than 4 in the United States and Canada. Mexico’s TFR started plunging in the early 1970s and now stands at 2.2. 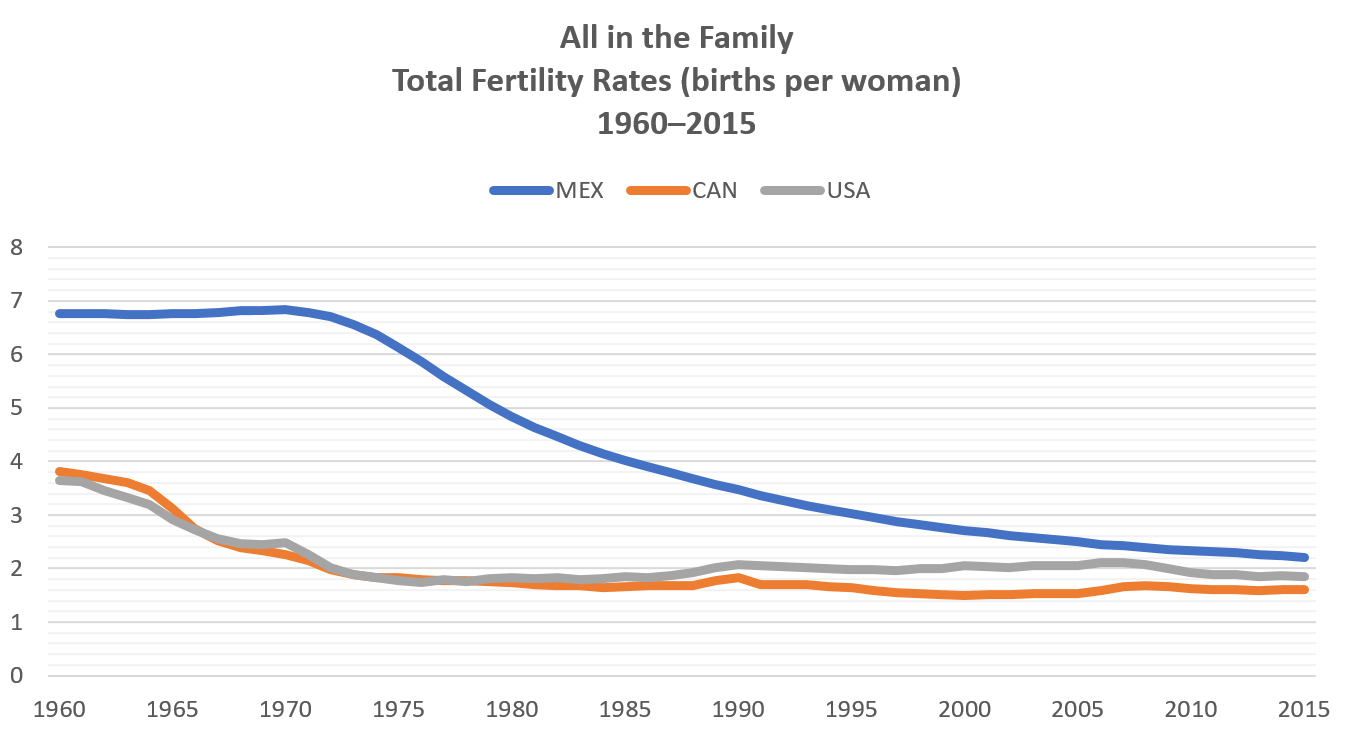 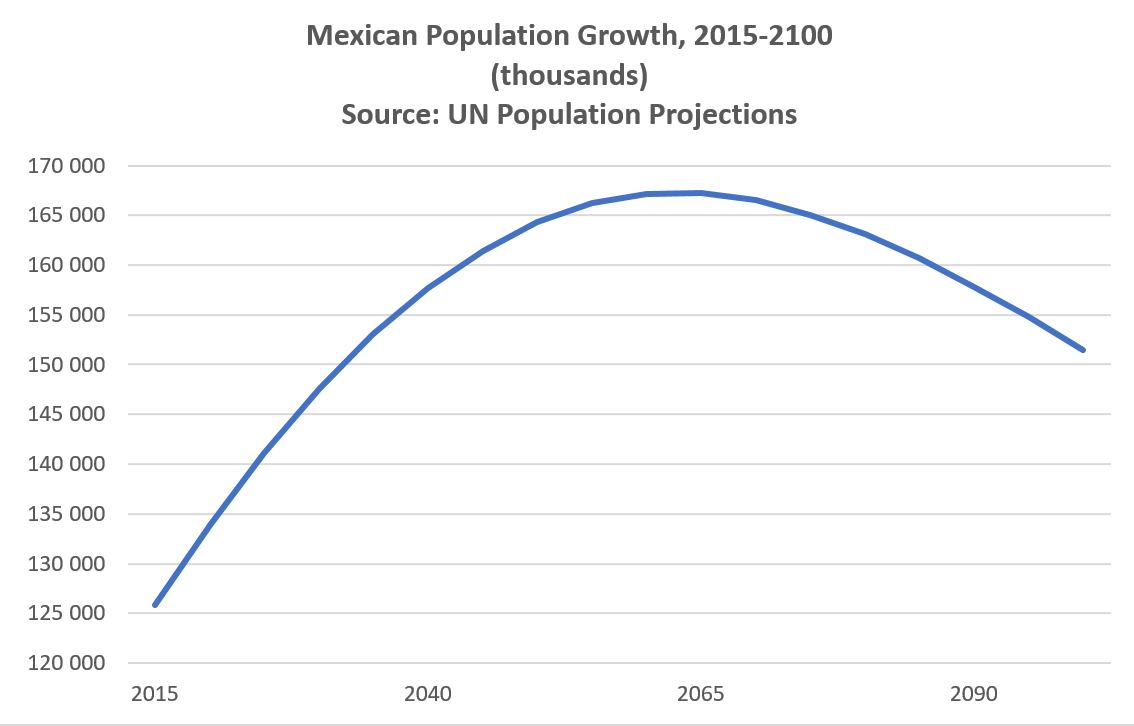 The causes of this rapid decline in the birth rate are many, just as in the United States. Two factors are the simultaneous decline in marriages and steep rise in divorce. Like all the countries of Latin America, Mexico has a marriage rate far below that of the United States, and Mexican divorces have quadrupled since 1994. These are not ideal conditions for larger families. 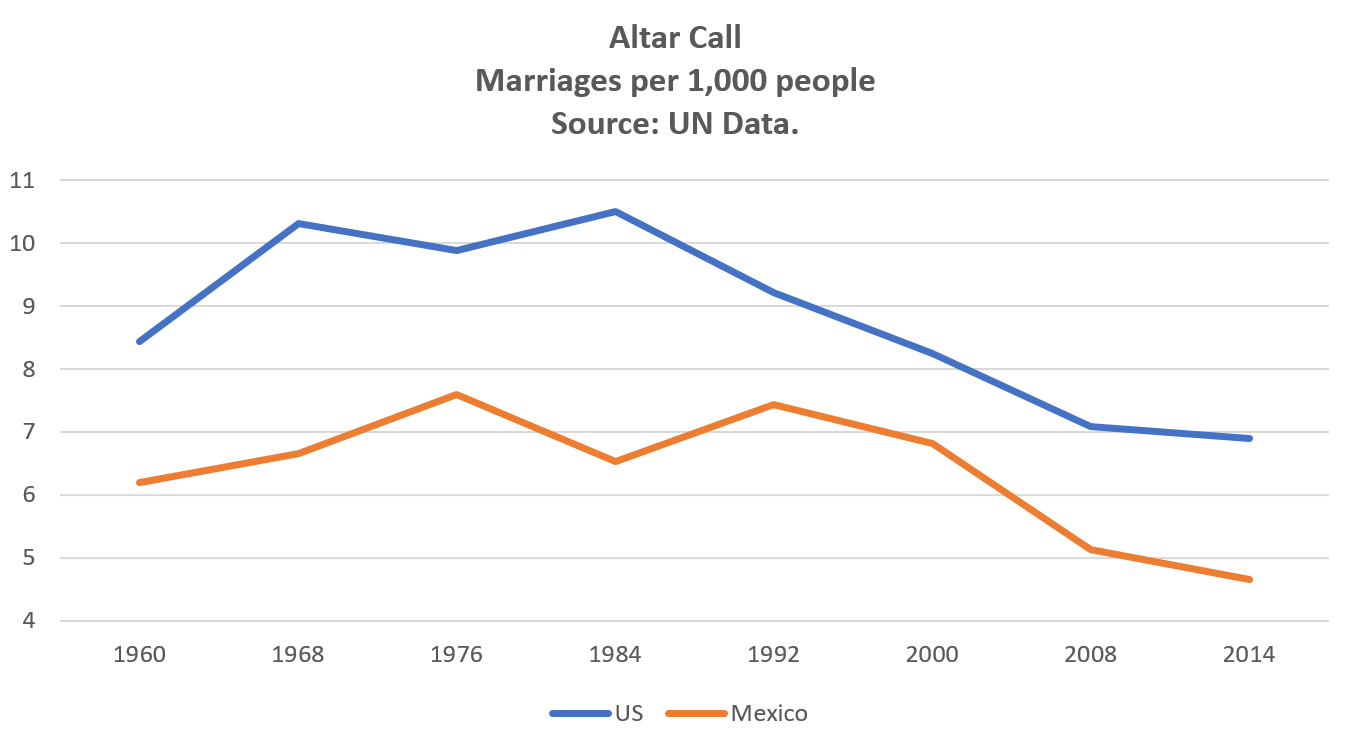 Mexico’s Economy Opens Up to the World

Mexico’s economy essentially was closed to the outside world until the 1980s. Slowly it began to open up to imports and foreign competition, leading to its debut into the global economy with the start of NAFTA and its entry into the OECD in 1994. By 2016, Mexico was importing over 20 times as much in goods and services as in 1970. The results are palpable, especially in Mexico City and other major Mexican cities. Foreign products, especially from the United States, are widely available, representing a dramatic expansion of consumer choice compared to mid-century Mexico. This includes a wide variety of U.S. food products, which run from Washington state apples to Little Debbie Zebra Cakes. The rise in exports, at over 30 times the 1970 level, is even more dramatic. However, gross domestic product per capita has increased at only about a third the rate of exports. Mexicans are better off, but trade has not made them rich. In the energy sector, the opening has been astounding. Sheltered from competition for 75 years, PEMEX, the state-owned petroleum monopoly, was (and remains) a model of inefficiency. But constitutional reforms in 2013 allowed other energy suppliers into the market, resulting in a massive increase in natural gas imports from the United States. In the last four years, U.S. pipeline deliveries of natural gas to Mexico have doubled and in 2016 accounted for almost 60 percent of all U.S. natural gas exports. As Mexico converts to natural-gas fueled power plants, this number is likely to go even higher. 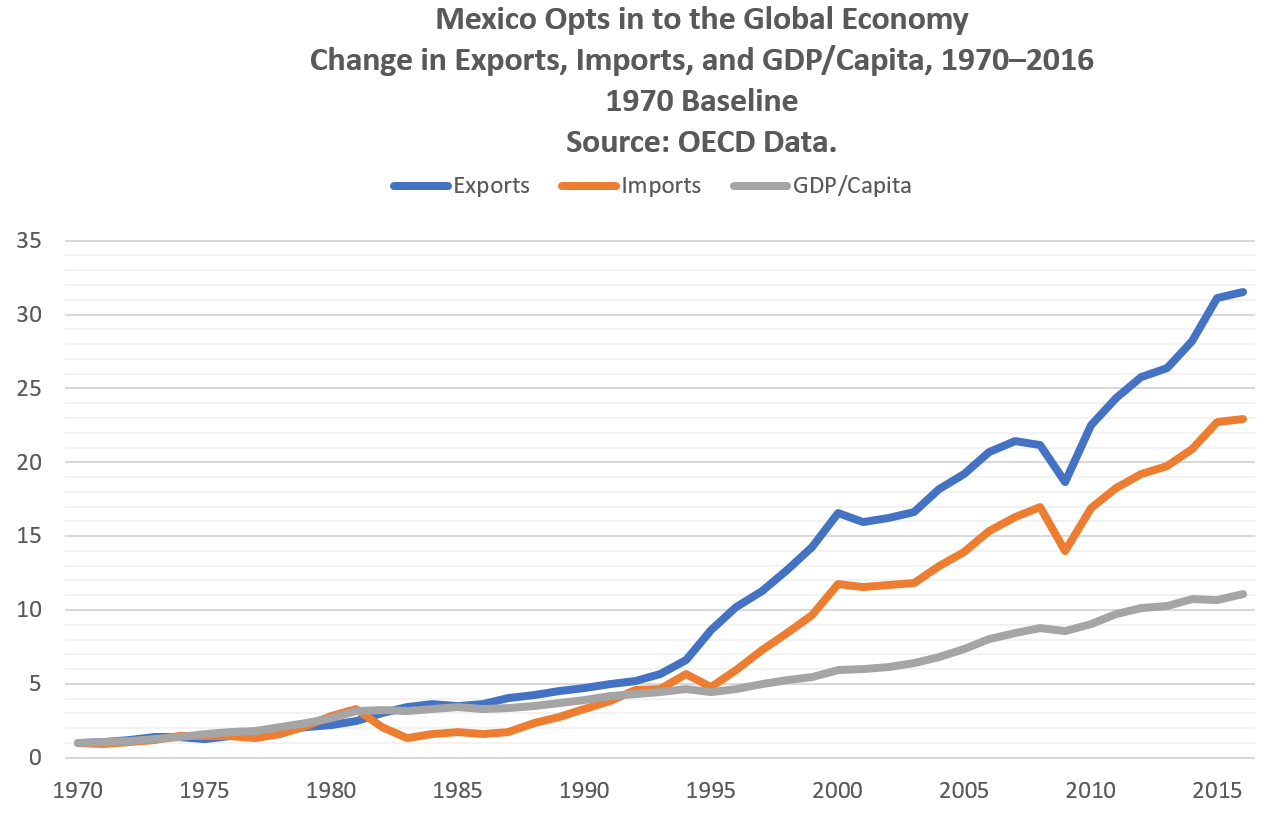 About a half-century ago, large numbers of Mexicans began moving to the United States. According to the Pew Research Center, in 1970 there were 760,000 Mexican-born immigrants living in the United States. By the mid-1990s the number of new Mexicans arriving every year hit 500,000 and peaked at 770,000 in 2000. This huge wave was due to several factors: changes in U.S. immigration law; the 1995 peso crisis; and the enormous cohorts of young Mexicans born in the 1960s who were in their prime work years three decades later.

But something started happening in 2000. Fewer Mexicans attempted to cross into the United States and more started returning home. By 2010, the gross number of arrivals (that is, not counting returns to Mexico) had bottomed out at 140,000. (Since 2010, according to the U.S. Customs and Border Patrol, apprehensions on the southwest border have dropped over 30 percent and last year hit their lowest level since 1971. These numbers, however, are difficult to correlate with actual immigrants.) Meanwhile, the flow south increased. From 2009 to 2014, 1 million Mexicans returned home; about 140,000 more than arrived in the United States. More immigrants are now arriving from the Northern Triangle countries (El Salvador, Guatemala, and Honduras) than from Mexico. 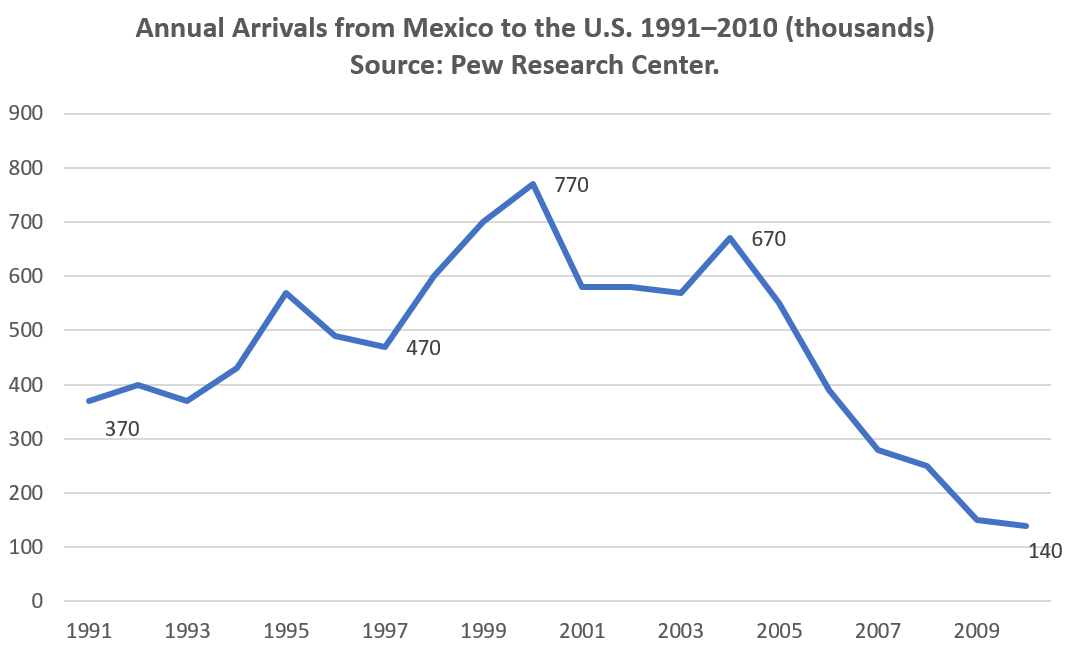 What has caused these trends? Many observers blame the 2007 U.S. housing crash (which led to a drop in demand for construction workers), but the immigrant numbers have been in sharp decline since 2000, so other factors are in play. Not surprisingly, Mexico’s sustained drop in fertility rates over the last 50 years is beginning to directly affect the pool of Mexicans considering immigration to the United States. As a percentage of the population, Mexicans aged 25–49 (those most likely to be looking for work in the United States) will peak in a few years and start a steady decline through the end of the century. (The size of this age group hit its high in the United States about 25 years ago, a lag time almost exactly mirroring the difference in fertility rates between the two countries.) Although short-term dynamics like economic growth and border enforcement will pull the immigrant numbers up and down, there is no way to increase the number of Mexicans born 25 years ago. 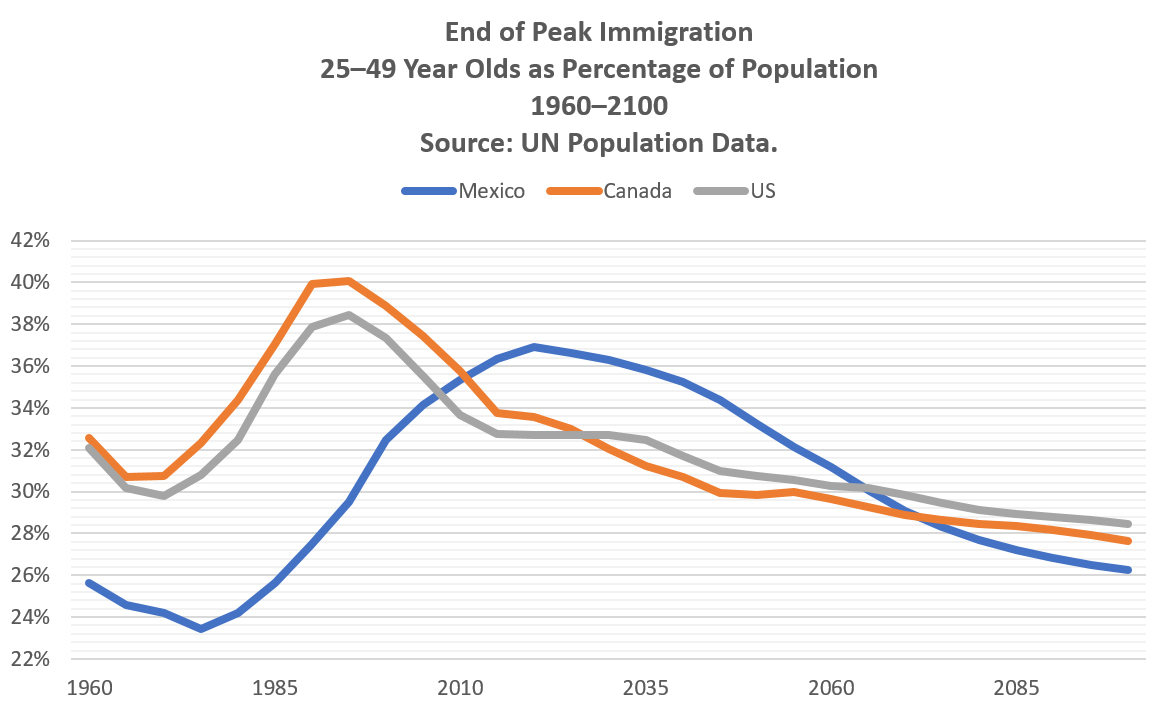 Back to the Future? Not Likely

Will these demographic and economic trends continue, and if so, what lies ahead for Mexico and its relationship with the United States? It is, of course, possible that Mexican fertility rates could rise and families could start getting bigger again. But Mexico, has undergone (albeit with a delay of several decades) the same wrenching societal changes that occurred elsewhere in the industrialized world. It, and other Latin American countries, are no longer outliers on any measure of family formation or disintegration, be it marriage, divorce, or birth control. If Mexican families start adding children, we will see the same thing happening in North America and Europe and probably for the same reasons. And the populations of almost all of those countries are shrinking quickly.

Two Strikes, Not Out

It is much easier to envision setbacks on trade and economic growth. A U.S. exit from NAFTA, or the election of a statist, market-unfriendly Mexican president, could scare off new investment in both the United States and Mexico and choke off trade. But even those scenarios are doubtful, simply because the countries’ economies have become so deeply entwined since 1994 that they cannot be disentangled by one or even two bad presidents. Our energy sectors, our automotive industries, and our agricultural markets are almost thoroughly integrated. Even in the face of high uncertainty on NAFTA’s future, U.S. manufacturers continue to bet on Mexico. They have little choice but to do so. A post-NAFTA environment would not be easy, but it also would not be catastrophic. Prices would go up, and investment would go down, but the quarter-century relationships would remain.

Elections Matter, But Not Forever

Next year is a big election year, both in Mexico and the United States. Mexico will vote in a new president, and Americans will decide whether to allow President Trump to keep his majorities in Congress. Neither election cycle will improve the U.S.-Mexico bilateral relationship, as the focus returns to “the worst trade deal in history,” the Wall, and the devastating effects of the drug trade on both sides of the border. Meanwhile, the tectonic demographic and economic shifts will continue, giving the relationship more resilience underneath the surface.