There’s something different about the South Korean government as the National Assembly starts a new session this week (May 30) – it is divided, with a fragmented opposition for the first time since 2002. It will stay that way for the remaining 19 months of Park Geun-hye’s presidency, which, for her, is likely to be the most difficult period of her five-year term. The division leaves South Korea poorly suited to develop new strategies and thinking to cope with changes in North Korea, China and, possibly soon, the U.S. These changes are hurting South Korea, leaving it in need of bold responses. But it is unlikely to get them as Park seeks to preserve what remains of power while her political opponents position for the next presidential election in December 2017.

In North Korea, the Kim Jong Un regime accelerated its weapons program and stiff-armed virtually all engagement, diplomatic and military, with Seoul. As a result, after North Korea tested a nuclear weapon in January, the Park government protested by closing the Kaesong Industrial Complex, the last project initiated in the Sunshine Policy era of 16 years ago and a source of South-to-North wealth transfer. South Korea also helped pass stricter sanctions on North Korea at the United Nations. Park still has plenty of time for a break in diplomacy with the North but, to date, she has been treated far worse by Pyongyang than any other South Korean leader in 20 years. There are no signs from Kim Jong Un that he is interested in any interaction with the South. There are not even signs of not-so-secret talks that characterized interaction between Lee Myung-bak’s government and North Korea. For Park, the result is fewer options to press forward on the country’s main geopolitical issue or to use it as a distraction from South Korea’s difficult economic issues.

And those economic problems are best framed by South Korea’s export difficulties with China, its leading export destination. South Korea’s shipments to China fell about 15% by value during the first quarter and nearly the same during the second. Business and government leaders in Seoul are, after originally forecasting a short-term drop and recovery, recognizing that growth of 7 percent or more is no longer realistic for China. Instead, China appears to be undergoing the slow motion change that happened in Japan in the 1990s and South Korea more recently – in which control of capital shifts from government and big companies to consumer households. That could take years to play out, a period in which demand for South Korean parts and goods will be growing far more slowly – or worse shrinking, as lately – than South Koreans became used to. China’s growth helped South Korea quickly lift itself from the 2008 global economic downturn. Now, South Korean exporters must find other markets to help. Park’s recent visits to Iran and countries in Africa are emblematic of that search. 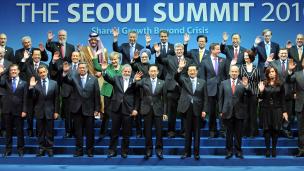