Spotlight on Civilian Harm in the Mariupol Theater Airstrike

On March 16, a Russian airstrike hit the Mariupol Drama Theater, where hundreds of civilians had taken shelter amid the ongoing siege of the city. It is unclear how many people were killed or injured in the attack. Satellite imagery captured by Maxar on March 19 reveals that the theater was largely destroyed. Prior to the attack, the word “children” (in Russian) was written in large white letters on the ground in front of and behind the theater.

The airstrike was very likely conducted by precision guide munitions, as is evidenced by the very localized nature of the destruction. The munitions struck on the center-east section of the theater's roof. In doing so, they destroyed the underlying roof support structure, causing the roof to collapse, which in turn collapsed the stage and main floor below it, trapping civilians seeking shelter in the building's basement. Although the bomb shelter under the theater appears to have held up during the strike, days later, survivors are still being pulled from the wreckage. Search and rescue operations are underway, but access to the site remains limited.

Targeting of the Mariupol theater is consistent with Russia’s pattern of attacking non-military objects and locations—including hospitals and apartment buildings—in order to terrorize the population. Russia’s use of cluster munitions, thermobaric missiles, and indiscriminate shelling has led to widespread civilian casualties and shows no signs of abating. While the means and methods used are consistent with Russian conduct in previous military engagements in Syria and Chechnya, the Mariupol theater attack is particularly egregious and demonstrates Russian forces’ wanton disregard for basic principles of international humanitarian law, also known as the laws of war. The Russian Federation remains a signatory to the Geneva Conventions, although President Putin has made efforts to withdraw from additional protocols relating to civilian protection. 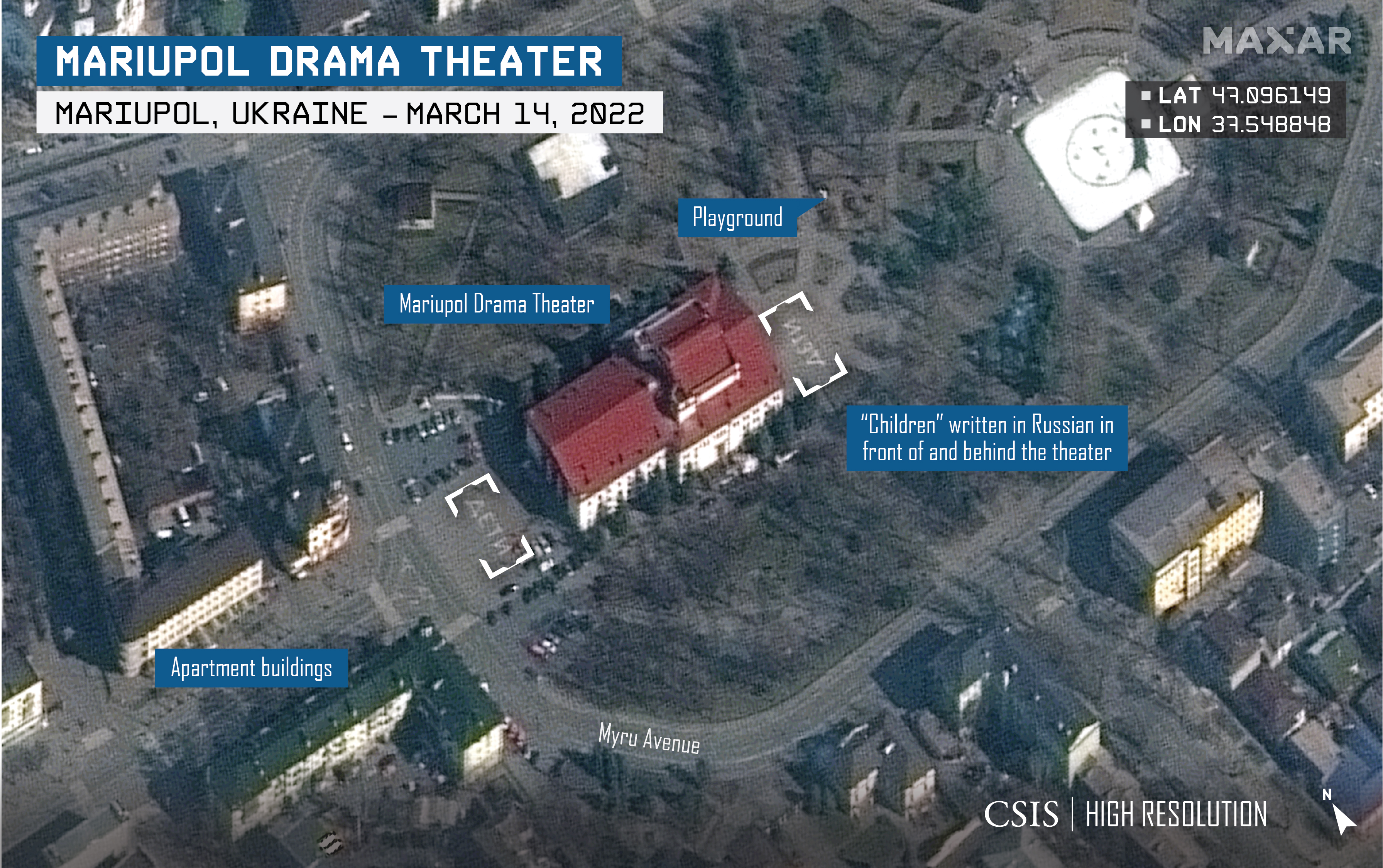 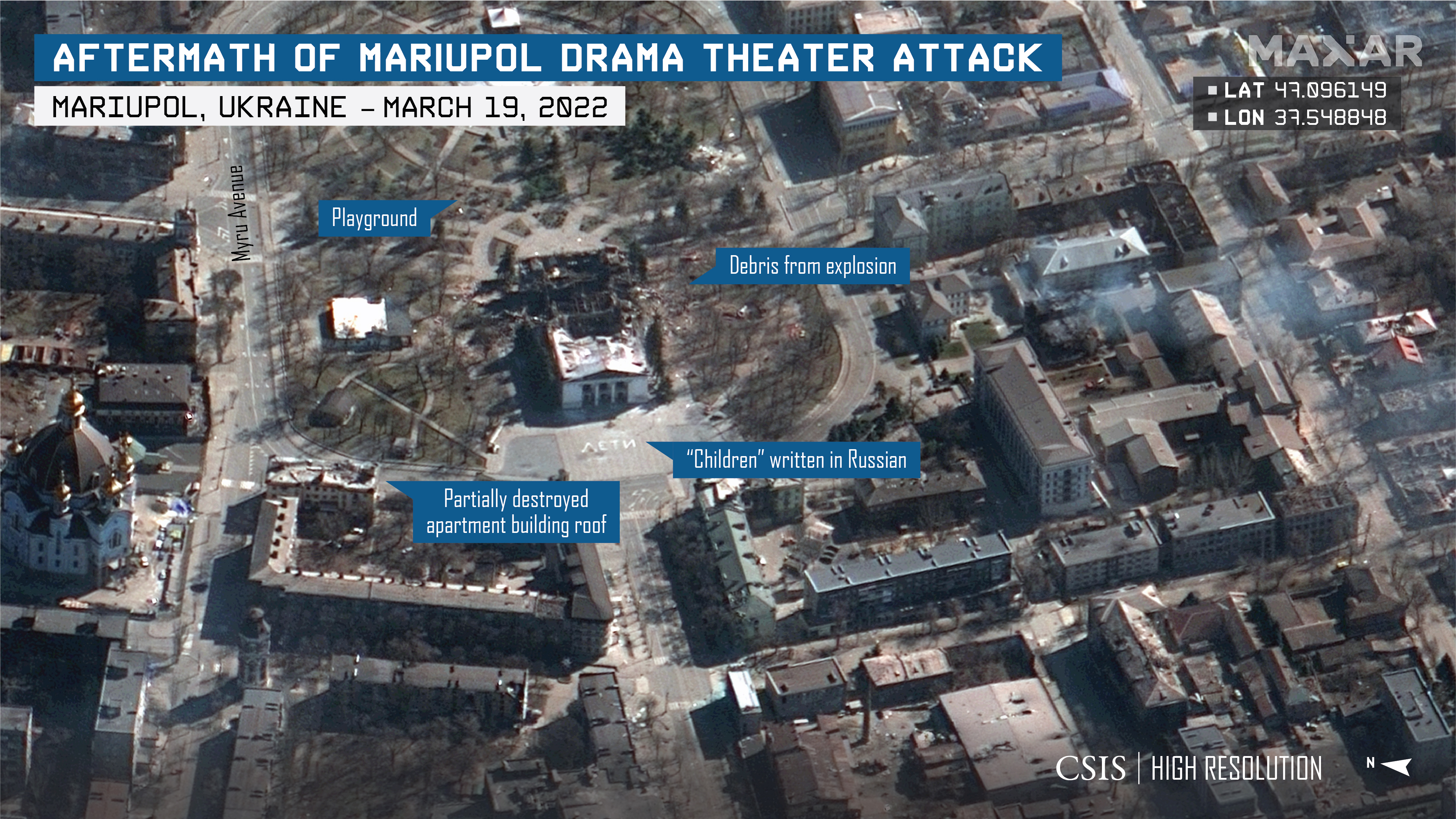 In this attack, Russian forces failed to apply the principles of distinction, precaution, and proportionality. The principle of distinction requires military actors to always distinguish between military and civilian objects. This is an obligation on the military actors, not civilians; even if the residents of Mariupol had not clearly identified themselves as civilians, Russia’s forces are required to determine the civilian character of the location prior to launching an attack. The principle of precaution requires combatants to take all possible precautions to minimize the harm to civilian life and property. This requirement to take “constant care” would compel Russian forces to avoid attacking that location. In the case that Russian forces determined that the site had a military purpose, they would be obligated to warn of an impending attack to allow civilians to leave the area. The attack also raises questions around the principle of proportionality. Attacks—even against lawful military targets—must be avoided if the damage to civilian life is excessive in relation to the anticipated military advantage. Russia has presented no evidence of any military use of the facility, nor potential military advantage to be gained, and used methods—in this case heavy missiles—whose impact on civilians inside the building was known.

Russia’s disregard of these foundational principles suggests this attack could be classified as a war crime and an escalation of an existing pattern of military conduct that is in direct contravention to core principles of international humanitarian law and human rights law. While the Mariupol theater attack is consistent with Russian tactics throughout this invasion, the uniquely horrendous nature of this incident may prove a galvanizing moment for justice and accountability with respect to these violations.

The attack ironically took place the same day the International Court of Justice ordered the Russian Federation to suspend its military operation in Ukraine and to refrain from any action to aggravate the conflict; it also came in the midst of a visit to Ukraine by the prosecutor of the International Criminal Court (ICC), who has opened an investigation in Ukraine. The attack will likely strengthen his hand as he determines whether he can bring charges of war crimes or crimes against humanity against Russian officials for their actions in Ukraine. The Rome Statute of the International Criminal Court gives the ICC jurisdiction to prosecute those responsible for the most serious violations of international humanitarian law, including intentional attacks on civilians and civilian infrastructure and attacks that disproportionately harm civilians compared to any military objective.

Ukraine’s 2015 acceptance of the court’s jurisdiction over Russian crimes in Ukraine, despite not being a member of the ICC, and the referral of the case to the ICC by 41 member states have allowed the prosecutor to move with unusual speed in progressing his investigation. Demonstrating intent to target civilians or civilian infrastructure will require the collection of documentary and physical evidence and witness and expert testimony, but the process would particularly benefit from the intelligence collected by the United States, the United Kingdom, and other allies. The Biden administration has already declassified an unprecedented volume of intelligence about Russian intentions in Ukraine and is facing bipartisan calls to share additional intelligence with the ICC directly. To do so, the administration will have to overcome its traditional reluctance to support ICC prosecutions unless the defendant’s government has accepted ICC jurisdiction or the case has been referred by the UN Security Council. The horrors of this attack provide an additional incentive to do so.

Many have drawn comparisons between the intensity and severity of the ongoing Russian bombardment of Mariupol—as exemplified by the theater bombing—with the aerial bombardment of Aleppo, Syria, in 2016. Whether, like earlier massacres in Srebrenica and the Nyarubuye Catholic Church in Rwanda, this attack also proves to be a turning point for efforts to seek justice and accountability remains to be seen.

Jacob Kurtzer is director and senior fellow of the Humanitarian Agenda at the Center for Strategic and International Studies (CSIS) in Washington, D.C. Marti Flacks is the Khosravi Chair in Principled Internationalism and director of the Human Rights Initiative at CSIS. Matthew P. Funaiole is director of the iDeas Lab and senior fellow with the China Power Project at CSIS. Joseph S. Bermudez Jr. is a senior fellow for imagery analysis (non-resident) with the iDeas Lab and Korea Chair at CSIS.

Russia and Eurasia , and Satellite Imagery