On March 13, 2022, the Russian military attacked the Zorya-Mashproekt gas turbine complex in southern Ukraine, a complex that once supplied engines to the Russian navy. This strike represented the coup de grace and final indicator of the end of Russia’s longstanding dependence on the key industrial capacity of Ukraine. The strike also offers evidence of continuing Russian efforts to reduce dependence on Western suppliers and develop domestic capabilities. This decoupling may be a bellwether for how Russia and other states act in future conflicts—namely, reducing dependencies where countries want to mitigate risks in case of armed conflict. If Russia or other states have moved to onshoring acquiring capabilities from other countries, this could signal their plans for strategic realignment through force or other coercive methods.

The Mykolaiv Oblast, where Zorya-Mashproekt is based, is the core of Ukraine’s shipbuilding heartland. 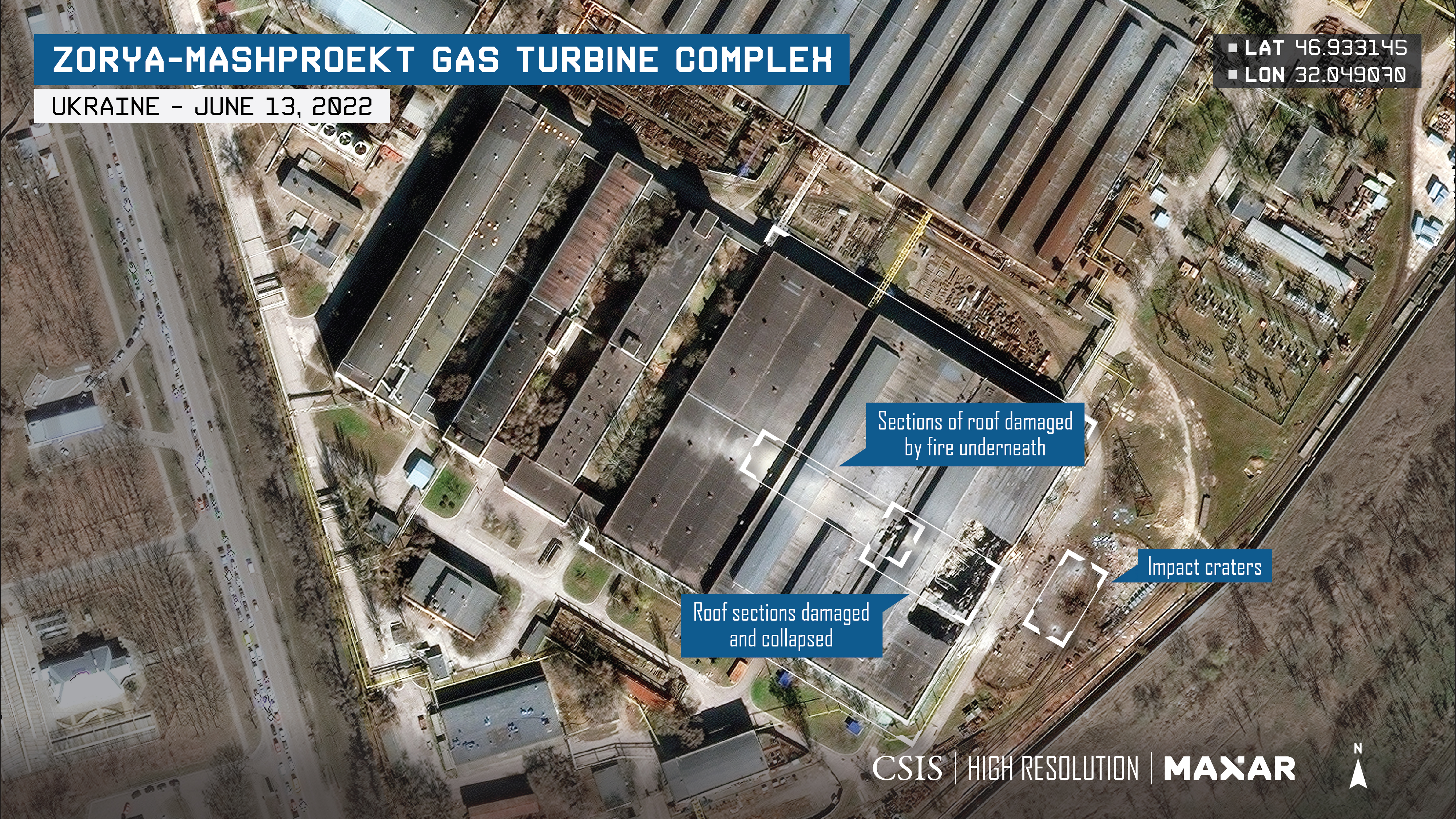 Image may not be republished without permission. Please contact imagery@csis.org.

Some of the most cutting-edge ships of the Russian navy, including the now famous Slava Class, floated out of the shipyard up the river from the gas turbine complex. Russian navy warships, as well as foreign warships that rely heavily on Russian equipment, have a deep reliance on the Zorya-Mashproekt gas turbine complex because it produces the equipment that powers their surface fleets. CSIS analyzed this strike to understand Russia’s decision, which was enabled by years of industrial planning and import substitution. As the imagery indicates, Russia’s stand-off strikes damaged significant portions of the plant and caused large fires, likely crippling the plant’s ability to produce turbines in the near term.

Before the outbreak of the war, Russia was most likely concerned with the concept of weaponized interdependence, which is when states with a high level of centrality within the global system use their comparative advantage in the military arms’ supply chain to punish or coerce another. Weaponized interdependence presents a unique threat to a Russian economy that relied heavily on the West and foreign partners for key goods and components. To make war more palatable, the Russian government may have worked to roll back the interconnectedness it once embraced. For states that are seeking to use a calculated application of violence to degrade the rules-based international order, being able to decouple from the global economy might soon be a prerequisite for the use of force.

Under the former Soviet Union, Ukraine became a manufacturing powerhouse. Hefty Soviet investments and Ukrainian technical prowess meant that some of the most capable military production sites in the Eastern Bloc were based in Ukraine. After the dissolution of the Soviet Union in 1991, Ukraine was able to retain the industrial sites that were built under Soviet rule. Tank factories in eastern Ukraine, aircraft plants outside of Kyiv, and the massive steelworks of Mariupol, all became important industrial centers. Through the 1990s and early 2000s, Ukraine was able to maintain these industrial centers (and their highly skilled workforces) and turn Soviet facilities into engines of the modern Ukrainian defense industrial base.

Before 2014, Zorya-Mashproekt supplied high performance marine gas turbines not only to the Russian navy, but also to the Indian and Chinese navies. This impressive showing in the global market was in large part due to Ukraine’s expertise in producing these massive systems, which are extremely difficult to manufacture.

After the annexation of Crimea, Ukraine publicly halted any cooperation with Russia’s military industry and Russian planners could no longer rely on Ukraine to power its navy. However, there were no easy alternatives available. Before 2014, Russia had briefly attempted to manufacture marine gas turbines during the 1980s but was met with limited success. Russia needed a reliable supplier and decided to develop a domestic production capability. For this, Russia selected UEC Saturn, a venerable manufacturer of high-performance aircraft engines, which are found on a range of aircraft from the Chinese Chengdu J-10 fighter to the Sukhoi Superjet passenger plane. By deciding on a domestic capability, Russia set out on a complex localization process that would take several years to complete.

In 2017, President Putin opened a newly completed UEC Saturn plant designed to build the next generation of turbines for the Russian military. Before the opening of the plant, UEC Saturn imported German machine presses to help manufacture critical components for the turbines. The fact that the plant relies on Western machinery, which enhances the Russian military’s capabilities, presents a serious risk in the Russia’s military supply chain. Russia’s focus on localizing production from Ukraine does, however, reveal key lessons in its efforts to procure Western equipment to manufacture military equipment.

The war in Ukraine offers an opportunity to examine the relationship between onshoring and how that affects or predicts conflict. Leading up the World War I, Europe saw a boom in trade that some believed heralded peace on the continent. This hypothesis proved to be wrong. Cross-border trade struggled to flourish for much of the twentieth century, but the 1980s saw an uptick of global trade. The growth, stimulated by the rise of the internet, global industrialization, and the end of the Cold War led many to believe that war would be difficult to rationalize for states because free trade of goods and ideas would drive down the risk of conflict between trading partners. The war in Ukraine seriously imperils those assumptions.

Before Russia invaded Ukraine, the Kremlin took clear steps to reduce their reliance on a historically major trading partner, as evident by the import substitution of marine gas turbines and the strike on Zorya-Mashproekt. Following 2014, Russia spent significant resources to localize production away from Ukraine, sending signals that Russia was actively seeking to look both inwards and seek partnerships with Indo-Pacific states in order to decouple from Ukraine. While efforts to localize production of critical goods may just be shrewd industrial policy, that policy decision carries with it a potential increased risk of conflict by making conflict less costly for the state seeking to localize production.

It is worth noting, however, that it is unlikely that Russia managed to fully sever ties between the Russian military and Ukraine and its Western partners. Despite the formal break between Ukraine and Russia in 2014, for example, India’s Ministry of Defense continued to partner with Zorya-Mashproekt to deliver engines fitted for Russian-produced Project 11356 class frigates. Considering that Russia had less than a decade to complete this import substitution policy, Russian efforts alone at localization will likely have limited ramifications on Russian readiness and production capabilities. The bulk of the Russian surface fleet still relies on Ukrainian turbines, which could be a serious vulnerability if Ukraine cannot or will not supply Russia with spare parts. They could, of course, attempt to manufacture the parts domestically, though that solution has two potential pitfalls. First, the parts could be too complex to manufacture. Second, manufacturing parts likely relies on Western machine tooling. If the West cuts off access to additional or replacement machine tools, or to spare parts to maintain existing tools, then Russia’s domestic manufacturing capability may slowly grind to a halt as machinery breaks down and cannot be repaired.

While Russia’s strike on the Zorya-Mashproekt gas turbine complex is just a single strike, it could be evidence of how Russia thinks about and manages the application of force and industrial risks. If, with further study, it turns out the Russia has been localizing key industries it once counted on Ukraine for, that could be the start of a framework for understanding the connection between industrial integration and the risk of future conflict. If Russia or other potential adversaries work to localize particular capabilities that it currently procures on the world market, then it would be worth examining the source of those capabilities as a potential target. Alternatively, if there is evidence that Russia is importing these capabilities from other nations, this could be a signal of how it sees the world and how it wants to engage in its own strategic realignment. As the world moves to an era of great power competition where competition sits in a context of industrial integration and cooperation, understanding how industrial policy relates to other instruments of national power will be vital to estimating risk and responding to those seeking to undermine the international rules-based order.

Cynthia R. Cook is the director of the Defense-Industrial Initiatives Group and a senior fellow in the International Security Program at the Center for Strategic and International Studies (CSIS) in Washington, D.C. Alexander Holderness is a research assistant with the Defense-Industrial Initiatives Group at CSIS. Grace Hwang is a program coordinator and research assistant with the Burke Chair in Strategy and Transnational Threats Project at CSIS. Joseph S. Bermudez Jr. is a senior fellow for imagery analysis (non-resident) with the iDeas Lab and Korea Chair at CSIS. Jennifer Jun is a project coordinator and research assistant for imagery analysis of the iDeas Lab and Korea Chair at CSIS.