North Korea's testing and development of its ballistic missile and nuclear programs appear at the end of 2022 to be unstoppable. During the calendar year, the regime has conducted ​34 tests, the highest number in the history of the programs and many analysts believe a seventh nuclear test is in the offing.  The fact that this accelerated testing campaign -- costing at least $650 million according to some estimates -- continues during North Korea 23-months long COVID lockdown suggest at least three observations. First, the regime's resilience in the face of severe economic hardship is more robust than any anticipated. Second, the "theory" that Chinese material pressure on the regime could make it more pliable to denuclearization negotiations appears in doubt. The COVID lockdown has led to a drop of ​90 percent in Sino-North Korean trade and this has not coincided with a willingness to enter denuclearization talks (trade with China constitutes 90 percent of North Korea's external trade).  Third, North Korea is willing to countenance extremely high costs to its population to build its nuclear weapons state, and apparently views talks with the United States or South Korea as unnecessary and distracting from its goals.

It is in this context that CSIS and JoongAng Ilbo hosted a keynote discussion with Mr. Jake Sullivan, Assistant to the President for National Security Affairs. In a wide-ranging conversation, Dr. Victor Cha asked Mr. Sullivan to provide a statement of the Biden administration's current policy principles regarding North Korea. The key points emerging from the discussion and the transcript follow: 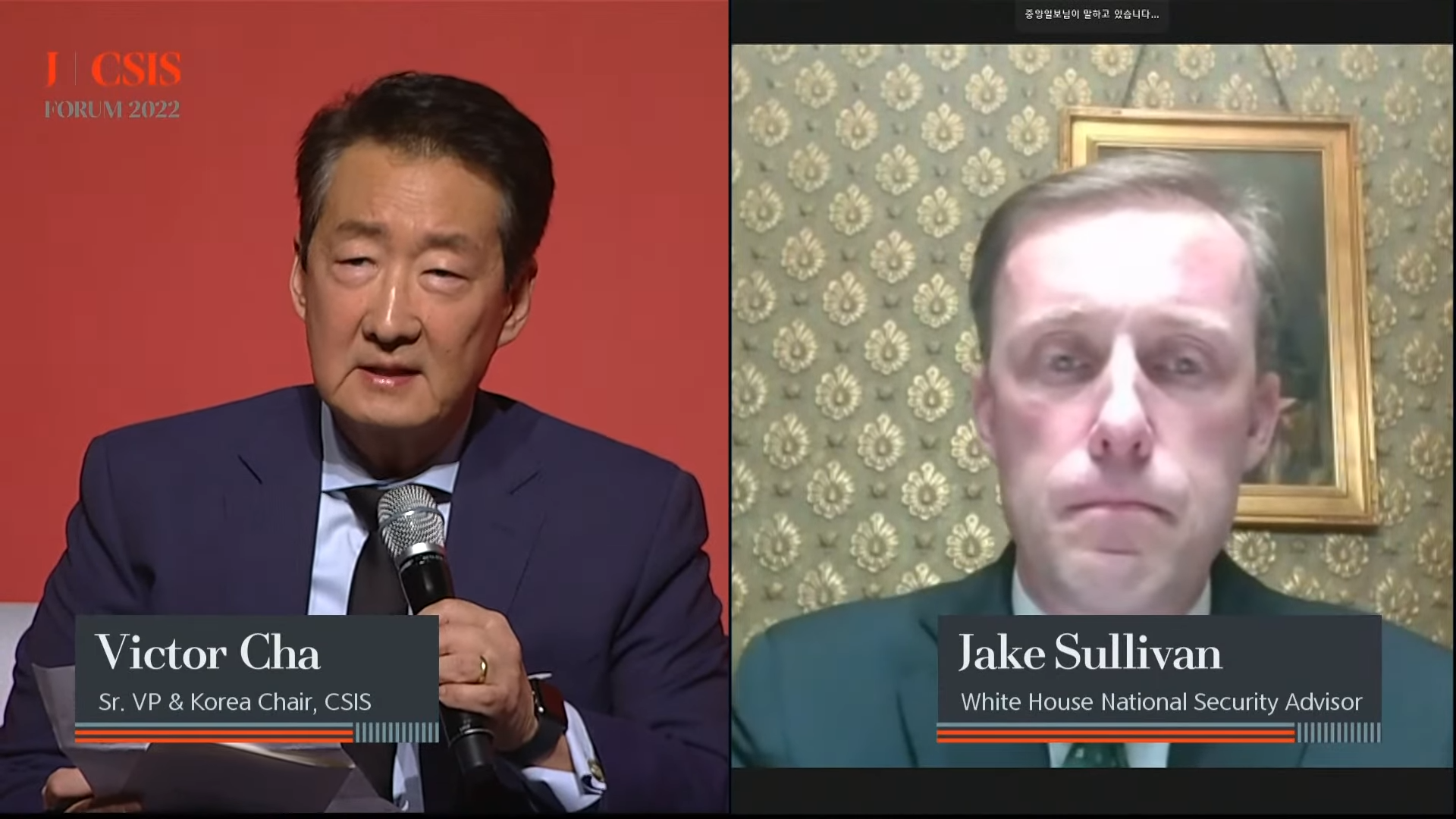 Victor Cha: I’d like to start with North Korea. Their missile testing campaign really seems to be quite unstoppable at the moment. As you know well, they tested the Hwasong-17. Everybody expects a seventh nuclear test. The National Defense Strategy describes North Korea as a persistent threat, but this threat continues to grow every day.

I wonder if you could sort of tell us how you’re thinking about it. What is the administration’s policy on North Korea? We’ve had very full statements with regard to policy on China, but any thoughts that you could offer on where we are on North Korea would be – would be greatly appreciated.

Jake Sullivan: It's a very important question, where are we and where are we going with respect to our approach to North Korea, particularly in light of the actions that they have been taking over the past many months. And we’ve really took the first few months of this administration to run a rigorous and systematic policy review on our DPRK policy, and we have essentially been following the core elements of that policy as we move forward. And we’ve tried to be steadfast in what our ultimate objectives are and then flexible in how we work together with our closest allies, starting with the ROK and Japan, on dealing with this growing and expanding missile and nuclear threat from North Korea.

So, the North Star of our policy remains as it has been since day one of the administration, which is the complete denuclearization of the Korean Peninsula. And that’s a goal that we share with both the ROK and Japan. It is a goal that we will continue to pursue in close coordination and alignment. And I think the recent trilateral meeting and statement in Cambodia is a reflection of the ways in which we’ve been able to work together quite effectively – more effectively, I would argue, than at any point at least in memory on a trilateral basis.

We’ve made clear in both public and private communications that we bear no hostile intent towards the DPRK. We are prepared to meet without any preconditions. And yet, Pyongyang has to date completely rejected this sincere outreach. In the event that they chose to take a different tack and to engage, we’re prepared to explore practical steps that would increase regional security and address the interests of both sides.

We, obviously, have no illusions about the challenge we’re up against, about the pace and intensity of testing, and about the difficulty in achieving the ultimate objective that we share with our closest allies. But at the same time, we are not going to cease our consistent and persistent efforts to push back
against the provocative activities that we’re seeing from the North, to coordinate closely with likeminded partners to take actions in multiple different formats to be able to increase the costs and increase the robustness of our response to what we are seeing. And we will also at the same time
continue to work with partners around the world on enforcing the U.N. Security Council resolutions.

So that’s our approach. That’s how we’re pursuing things. That’s how we will continue a policy of deterrence and, ultimately, a policy through a combination of pressure and diplomacy to arrive at the ultimate objective of the complete denuclearization of the Korean Peninsula.

Korea , Defense and Security , and Geopolitics and International Security