Strangling the Bear? The Sanctions on Russia after Four Months

Western governments imposed a series of financial, trade, and travel sanctions on Russia starting in late February in response to Moscow’s invasion of Ukraine. With almost four months of observations and data, Western policymakers are assessing the economic impact of the sanctions, weighing the risks of increasing pressure on Russia with new sanctions, and considering how the sanctions might plausibly contribute to an end to the war.

Q1: What effect are the sanctions having on Russia’s economy?

A1: The short-term financial impact of the sanctions on Russia’s economy has been substantial but appears to have dissipated since May. The Central Bank of Russia (CBR) prioritized stabilizing the exchange rate after the first wave of sanctions, which included a freeze of roughly half of the central bank’s international reserves. The CBR imposed capital controls and raised interest rates. The ruble fell more than 40 percent against the dollar after the invasion but then strengthened above its prewar level by late April, albeit by no longer being a fully convertible currency. The CBR doubled its benchmark interest rate to 20 percent after the war started, but after mid-April, the CBR began gradually cutting the rate. By mid-June, the rate and banking sector liquidity had returned to prewar levels.

Most forecasters expect Russia’s GDP to contract by about 10 percent this year and by 1.5 percent next year. Russia’s official consumer price index jumped nearly 11 percent from mid-February to early May. Since then, it has been nearly flat, probably in part because the strengthened ruble has helped keep import costs low, even if there are shortages. Purchasing managers’ indices suggest that Russia’s service sector contracted sharply in March and continued to modestly contract as of May; the manufacturing sector registered a smaller decline in March and appears to have expanded in May.

Reduced access to imported technologies, combined with the exodus of foreign firms and skilled Russian workers, will be long-term drags on Russia’s economy. The U.S. Department of Commerce claims that global chip exports to Russia are down 90 percent, with 38 countries imposing export controls. Many foreign companies are “self-sanctioning” by curtailing operations or leaving Russia, even if not required legally. Yale University’s School of Management, which tracks more than 1,350 foreign companies in Russia, estimates that as of mid-June, 12 percent were scaling back operations, 35 percent were suspending operations, and 24 percent had announced they would withdraw entirely.

Russia has not reported trade data since January, but its headline current account surplus—which includes Russia’s goods and services trade plus income—reached a record $110 billion from January to May. This reflects the increased value of commodity exports combined with depressed imports. Data from its trading partners suggests that Russia’s imports fell sharply in March and April. This is affecting industrial production, including of military equipment, and disruptions probably will increase as inventories of imported parts are depleted. Official Russian manufacturing data suggest a modest contraction in April but with automobile production declining by 85 percent year on year, reflecting a lack of foreign inputs. 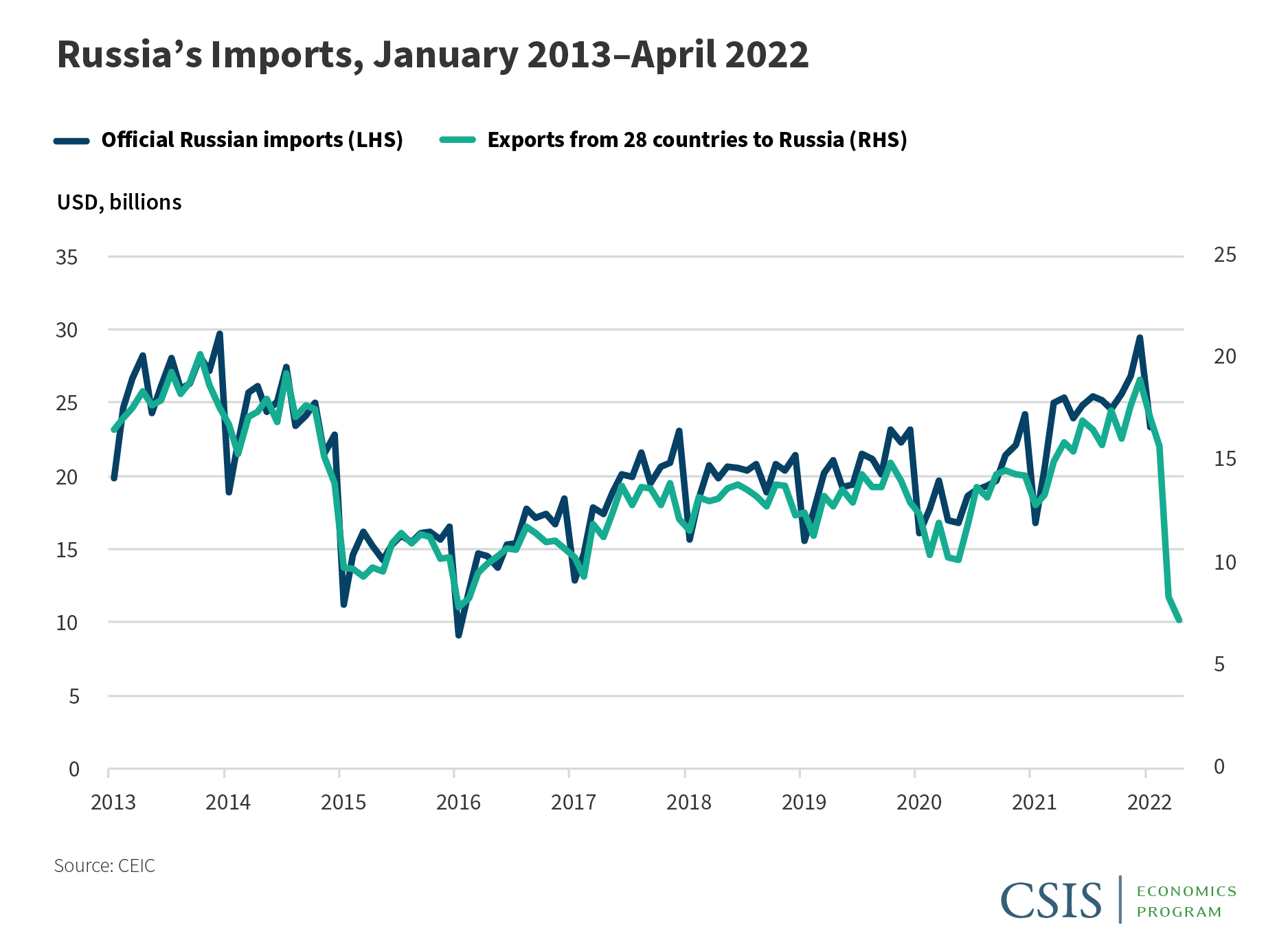 Q2: Are the sanctions weakening Moscow’s ability to fund its war effort?

A2: While the sanctions froze most of Russia’s overseas assets, Russia continues to receive revenues from its energy exports. Oil and gas revenues accounted for 47 percent of Russian federal revenues from January to May of this year, even though Russian oil production fell in April. Oil and gas revenues, however, increased by 80 percent. Russia is still earning roughly $1 billion per day in export revenues from oil and gas, about half of which flows directly into Moscow’s coffers. For comparison, Russian fiscal data suggests that Moscow spent $325 million per day on military expenditures in April, the latest data available. 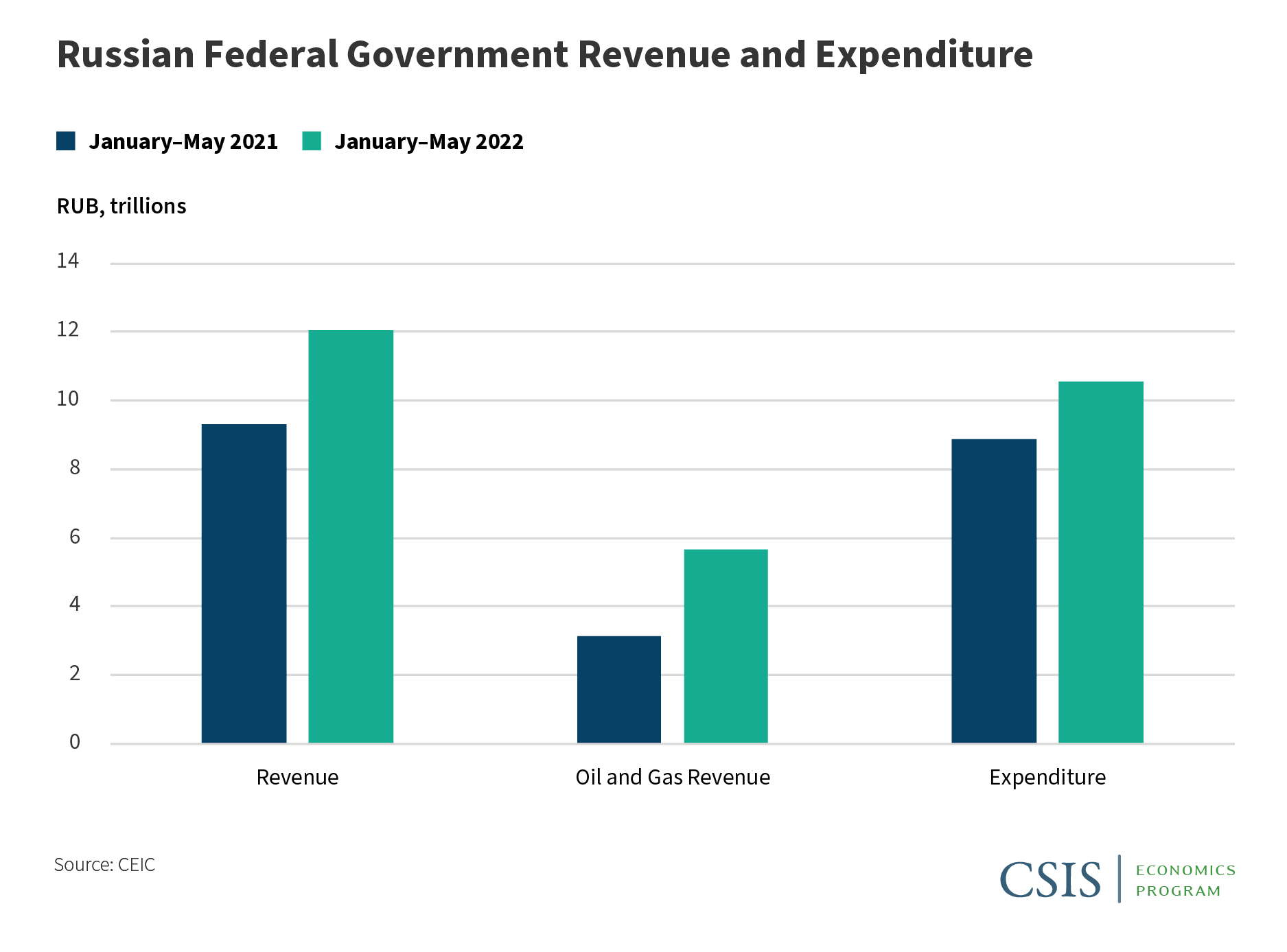 The oil and gas revenues mitigate Moscow’s need to tap other domestic resources for revenues. Reduced energy exports would not be fatal to Moscow’s fiscal position, as the Russian government’s balance sheet was strong going into the war, with public debt of $284 billion, or only 16 percent of 2021 GDP. The sanctions prevent the Russian government from borrowing in international markets, but—despite hype about a potential Russian sovereign bond default—Moscow did not rely on external borrowing even before the war. The Russian government had $62 billion in external debt last year, only one-third of which was owed in foreign currency. On top of that, Russia’s National Wealth Fund, which receives excess oil and gas revenues, has nearly $200 billion in assets, half of which is in usable ruble, renminbi, or gold assets.

Q3: How are other countries responding to the sanctions?

A3: While advanced economies in the West largely support the sanctions, developing or emerging market economies generally oppose them, even if diplomatically condemning Russia’s invasion. However, so far there is little indication of sanctions violations, including from Chinese firms, as companies in third countries fear secondary sanctions. Banks, such as in India, have been cautious about transacting with sanctioned Russian banks, even if for permitted energy trade.

China—Russia's top trading partner last year—reported a 42 percent decline in exports to Russia in dollar terms from March to May compared to the previous three months. Other major emerging market economies are on track for similar declines, except for Turkey, where exports rebounded in April.

Some countries probably are trading with Russia in their own currencies to avoid the dollar, but such arrangements are difficult to manage because of limited liquidity, exchange rate volatility, and fears of secondary sanctions. Sberbank earlier this month suspended settlement in Chinese yuan and is struggling to process transactions in Indian rupees. India reportedly has renewed a proposal to settle trade with Russia in Indian rupees to avoid dollar sanctions as India continues to seek Russian oil and weapons. Trading in the ruble/yuan currency pair surged to about $4 billion in May.

China and India have been the two main purchasers of seaborne Russian oil that would otherwise have gone to Europe. Nearly half of Russian oil on tankers now goes to Asia, and the overall volume of Russian seaborne oil exports has been steady. Importers are taking advantage of the $35 per barrel discount on Russian crude oil, which offsets the increased price in global oil prices since the war began. In May, Russia overtook Saudi Arabia to become China’s top source of oil. Indian oil refiners are looking for a six-month contract to increase oil imports from Russia. The ability of China and India to absorb Russian oil will largely determine whether the European Union’s sixth sanctions package—which bans the import of Russian seaborne crude and petroleum products after six and eight months, respectively—will reduce the volume of Russian oil exports.

Q4: What other sanctions are Western governments considering?

A4: Western governments are debating new sanctions to reduce Russia’s energy revenues while minimizing disruptions to global energy flows, which would push prices higher. Further financial sanctions on Russian banks, such as Gazprombank, are technically possible, but this could disrupt energy trade. Balancing these two goals is difficult absent new energy supplies elsewhere, as maintaining or lowering prices through demand destruction would be politically and economically painful.

One idea likely to be enacted is prohibiting Western insurers from covering tankers carrying Russian oil. Ships are commercially required to have insurance. The European Union’s sixth sanctions package includes such an insurance ban, which will take effect in six months. The United Kingdom has agreed to a similar ban. The effect of a shipping insurance ban is unclear. Some—including officials in Washington—worry that the insurance ban will substantially reduce Russian oil exports and push up prices. Others say that importing countries could offer their own insurance, perhaps with Russia offering reinsurance for the shipments, with only modest price effects.

Another idea is for countries aligned against Russia to coordinate their oil imports and set a maximum price for which they pay for Russian oil. This would allow oil to continue flowing but reduce the revenues Moscow receives from those exports. This idea might be discussed at the G7 summit in Germany in late June. The proposal could offer a waiver from the shipping insurance ban to countries complying with the price cap. However, such a plan would be difficult to coordinate among members, and it would require renegotiation of the European Union’s sixth sanctions package, which German officials say would be difficult. Furthermore, nonparticipating states could offer to pay the higher market price to Russia. Enforcing a price cap globally would require imposing secondary sanctions on other states, such as China and India.

A third idea is for energy importers to impose large tariffs on Russian energy. The tariff revenues could be used to support Ukraine or fund domestic relief measures. However, tariffs would be paid by the purchasers, not the seller, which suggests this would only reduce Russian revenues insofar as it resulted in a net decline in Russian energy exports. This would push prices higher.

In each case, the focus is on Russian oil rather than natural gas, as the latter would be much harder for Europe to replace. Moscow could retaliate for any of these actions by suspending gas exports to Europe or refusing to sell oil at the capped price, essentially calling the coalition’s bluff. This might already be happening, as Russia’s Gazprom this month has reduced gas exports via the Nord Stream pipeline, supposedly because of its inability to obtain necessary parts because of sanctions. Moscow might calculate that the short-term pain to Russia from reduced oil and gas revenues would be outweighed by the pain felt in Western countries as energy prices spike further.

Q5: What is likely to happen next and what are the lessons so far?

A5: Economic sanctions are a political decision. With commodity prices already elevated and inflation in the United States at a 40-year high, Washington is unlikely to pursue any actions that will make inflation worse, especially ahead of the U.S. elections in November. The White House has acknowledged that inflation is their top priority. Domestic and international objectives have collided, especially in Washington, and domestic priorities are likely to prevail.

Maintaining the Western coalition in support of Ukraine will be key. Further inflationary pressures—whether caused by sanctions, exogenous shocks, or Russian retaliation—could be a risk to this cohesion, especially if the war drags on. Such cohesion is also important as a signal to Beijing, where President Xi Jinping remains committed to his partnership with President Vladimir Putin. A rebound in Russia’s imports, especially from China, could signal that Russian firms are finding substitute inputs from “friendly countries” and that the impact of sanctions is weakening. Western governments should remain vigilant and be prepared to punish sanctions violators, even if Chinese.

An overriding strategic question is how sanctions will, if at all, contribute to an end to the conflict. Proponents of more sanctions, particularly on energy, believe fiscal and subsequent inflationary pressures might compel Russia to end the war. Critics note the poor historical track record for breaking the will of authoritarian regimes, especially during a war.

Perhaps stronger—and more accurate—threats of sanctions could have deterred Russia before the invasion, but using sanctions to coerce Russia to end the war now seems unlikely to succeed unless Russia’s battlefield prospects seem bleak to Moscow. The existing sanctions, especially export controls, may contribute to favorable military outcome for Ukraine by weakening Russia’s ability to resupply its forces. But ultimately, this is a war, and the road to a settlement probably goes through the battlefield.

Gerard DiPippo is a senior fellow with the Economics Program at the Center for Strategic and International Studies (CSIS) in Washington, D.C.