Strategic Competition and Foreign Perceptions of the United States

It is all too easy to focus on the military aspects of strategic competition with China and Russia or on the political issues of the day and to instead ignore the importance of how our allies, strategic partners, and other states perceive the United States. A June 10, 2021 poll by the Pew Research Service warns, however, that it can be exceedingly dangerous to do so.

The main headline of the poll is seemingly reassuring: “America’s Image Abroad Rebounds With Transition From Trump to Biden.” Most initial press reporting has focused on these results and they are important, but they need far more qualification. It is the line under the title that sounds a critical strategic warning: “But many raise concerns about health of U.S. political system.” As is the case with many polls, the results need to be put in context, and it is the full range of results that count – not a simple bottom line.

Shifting Attitudes Towards the U.S. Presidency

A copy of the full text of the Pew poll and report is attached at the end of this commentary, and the documents is available online here . The first part focuses on the shifts in the attitudes in key countries like Canada, Belgium, France, Germany, Greece, Italy, the Netherlands, Spain, Sweden, the UK, Australia, Japan, New Zealand, Singapore, South Korea and Taiwan. The Pew report summarizes these trends inFigure One, and they seem to be highly favorable:

Figure One; “Biden gets much higher ratings than Trump, and U.S. favorability is up significantly” 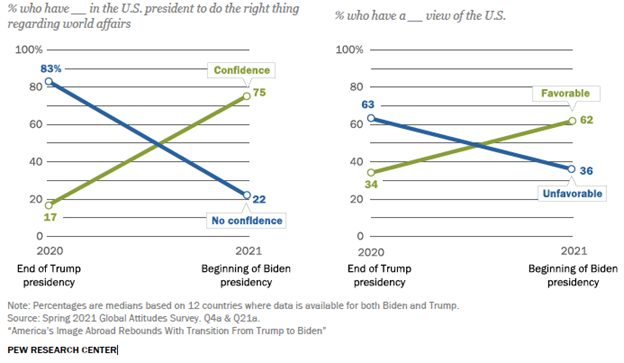 It is brutally clear from the text that follows – and by the break outs of trends by country – that foreign perceptions of President Trump were generally highly negative, dropped sharply during the election and the riots in Washington and the Capitol that followed, and have risen sharply as the Biden Administration has reversed the Trump Administration’s emphasis on a transactional foreign policy that emphasized direct benefits to the United States and has renewed America’s emphasis on actual partnership.

Confidence of Key European and Asian Countries in the United States

The poll then, however, begins to communicate a different message. On page nine, it notes that,

“Although Biden’s more multilateral approach to foreign policy is welcomed, there is still a widespread perception that the U.S. mainly looks after its own interests in world affairs. More than half in most of the publics surveyed say the U.S. does not take their interests into account when it is making foreign policy decisions, although fewer feel this way in Japan, Greece and Germany. Doubts about the U.S. considering the interests of other countries predate the Trump Administration, and this has been the prevailing view – even among close U.S. allies – since the Center began asking the question in 2002.”

The graphic results of the poll communicate a very different and more important message that is driven by the partisan excess and domestic crises in the 2020 Presidential Campaign, and the poll presents a series of graphs and tables that shift away from the presidency to allied trust in the United States and faith in American democracy. Figure Two shows a range of these very different results. They need to be kept in context, and again, it is critical to read the full Pew text.

Negative as some of the trends in Figure Two are, the Pew text states,

There have been significant increases in the shares saying the U.S. considers their interests when making foreign policy since the question was last asked during the Trump presidency. In addition to the jump in Germany, there have been double-digit increases in such sentiment in Greece, the Netherlands, Japan, Canada, France, the UK and Spain. In Greece and Canada, this is the highest such reading in a Pew Research Center survey, even compared with the Obama era. Still, the predominant sentiment, going back to 2002 when the question was first asked, is that the U.S. does not consider the interests of countries like theirs. The election of Joe Biden has not fundamentally changed that.

It is all too clear, however, that the U.S. faces a major challenge in terms of information competition – and “warfare” – that Americans have so far failed to properly address. Competition with China and Russia, and lesser threats like North Korea and Iran, depends to a great degree on how other states compare the United States with such countries and on the faith in the U.S. as an ally and a political system. Important as military and economic strength may be, the U.S. needs to be far more than the largest and most advanced economy as well as the largest and most advanced military power. It needs to have the respect and trust of as many other powers as possible, and it needs to actually earn it on a consistent basis.

Swings in Confidence in the United States

Here, the longer term results of the Pew Poll are shown in Figure Three, and they warn how serious the past swings in popular opinion towards the Untied States can be in key countries Some have been driven by news events that are beyond the control of policymakers and may not affect alliances and strategic alignments. The overall pattern, however, is troublesome at best, and calls for both far more attention in communicating with our allies and partners and for more detailed polling to find out what factors drive negative perception of the United States and the comparisons of foreign attitudes towards China and Russia. It also makes it clear that the United States cannot rely on its own perceptions of Americans in competing. It must look at the perceptions of other states.

Foreign perceptions of the United States will shape all of these other areas of competition to some degree and will do so on a global basis that extends far beyond the South China Sea, the Indo-Pacific, and Russia’s “near abroad. 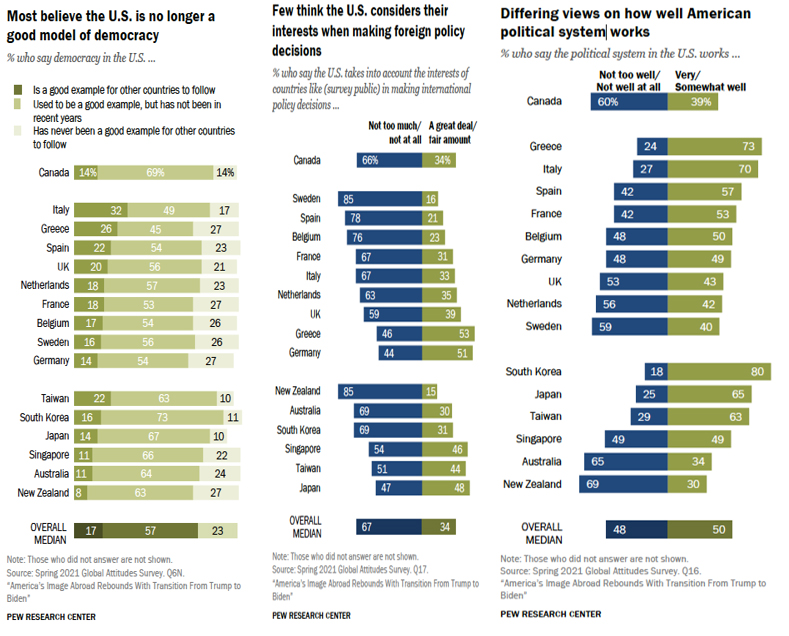 Figure Three: Favorable and Unfavorable Views of the
United States – Part One

Favorability of the U.S. is up sharply since 2020
% who have a favorable view of the U.S. 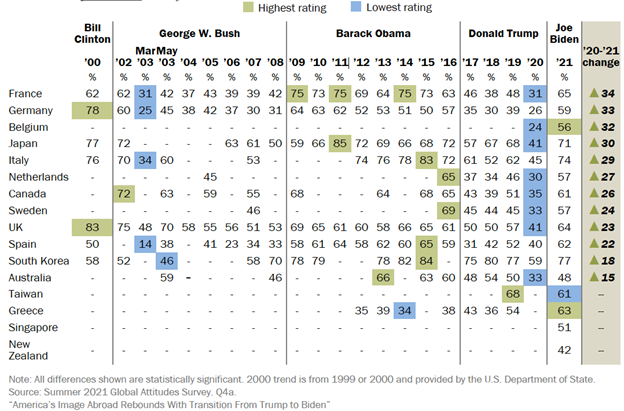 U.S. favorability sees one of its steepest recoveries in years from 2020 to 2021
% who have a favorable view of the U.S. 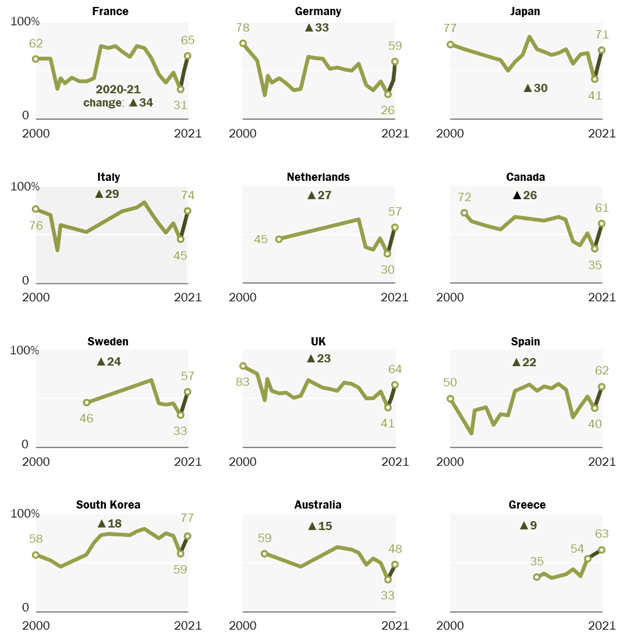 Competing with China and Russia on A Global Level

It is equally important to realize that the United States faces a future where it must deal with the medium to long term impact of the Covid-19 crisis, perceptions of U.S. withdrawals from Afghanistan and Iraq, how well American democracy functions in the upcoming 2022 elections, and how much allies and partners have rebuilt their trust in the United States.

The Pew Poll focuses on a limited range of countries that broadly share the same values, political system, and economic system. There are good reasons for these limits. As the Pew survey makes clear,

“For this report, we use data from nationally representative surveys of 16,254 adults from March 12 to May 26, 2021. All surveys were conducted over the phone with adults in Canada, Belgium, France, Germany, Greece, Italy, the Netherlands, Spain, Sweden, the UK, Australia, Japan, New Zealand, Singapore, South Korea and Taiwan…This study was conducted in places where nationally representative telephone surveys are feasible. Due to the coronavirus outbreak, face-to-face interviewing is not currently possible in many parts of the world.”

The fact remains, however, that many key countries are not included in this survey, including most of the countries where the U.S. now competes most directly with China and Russia – including nations in Central Asia, Southeast Asia, the Indian Ocean region, MENA and the Gulf, and sub-Saharan Africa – as well as countries linked to Russia like Belarus.

In spite of what is currently a far too narrow focus on direct military competition with China and Russia, America must actively compete in the rest of Asia, the Indian Ocean area, Africa, Latin America, and the Middle East. Here, foreign perceptions may be based on very different values with far more emphasis on economics and internal security – and in societies where substantial parts of the population see their own government as their primary threat or where an authoritarian regime has successfully managed to portray the United States as a hostile power or direct threat. In all too many such states, the leadership controls every decision and aspect of power, and public opinion is largely irrelevant – at least in the short run.

In the real world, it is also one of the ironies of modern military power that the cost of actually engaging in a major war is so high that “mutual assured destruction” is dropping from the nuclear level to the threat level conflict or any conflict where the mix of risks and direct costs is clearly higher than the value of fighting for the objective.

Here gray area and indirect warfare already tend to dominate competition with China and Russia on a global level, as do “white area” conflicts in trade, foreign investment, arms sales and security assistance, STEM levels of development, infrastructure, cyber, and space. So far, Figure Four indicates that the Pew survey seems relatively reassuring to the extent it focuses solely on how some key European and Asian general public view President Biden, President Xi, and President Putin. 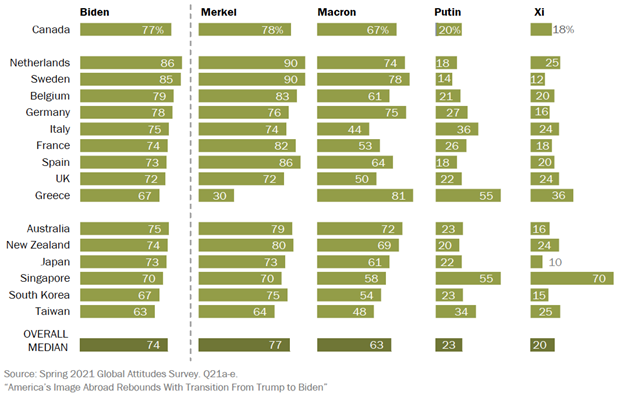 This commentary, entitled, Strategic Competition and Foreign Perceptions of the United States, is available for download at https://csis-website-prod.s3.amazonaws.com/s3fs-public/publication/210614_Cordesman_Strategic_Competition.pdf?5om5xDRnQ7SMO25kcfIAfaMKkVJf4t94.