Strategic Dialogue: Shaping a U.S. Strategy for the “Ghosts” of Iraq

The Burke Chair is issuing the fourth major revision to a Burke Chair analysis of the political/governance, economic, and security challenges that Iraq faces in creating a lasting strategic relationship with the United States. This analysis was developed to explore the issues raised by Secretary Pompeo’s announcement on April 7, 2020, that the United States would hold a strategic dialogue with the Iraqi government in mid-June 2020.

“With the global COVID-19 pandemic raging and plummeting oil revenues threatening an Iraqi economic collapse, it's important that our two governments work together to stop any reversal of the gains we've made in our efforts to defeat ISIS and stabilize the country. All strategic issues between our two countries will be on the agenda, including the future presence of the United States forces in that country and how best to support an independent and sovereign Iraq.”

“Secretary Pompeo made it clear that the United States would have to reassess its strategy in Iraq in terms of the growing Iranian and Iraqi Popular Mobilization Forces (PMF) pressure on the U.S. troop presence in Iraq, but also in terms of the impact of the Coronavirus on the Iraqi economy and the lack of any clear political unity in Iraq. He stated that the United States would support any Iraqi regime that moved, “away from the old sectarian model that ended up with terror and corruption.”

This latest update is released the week of the projected date of the strategic dialogue in order to emphasize the full range of problems that the Iraqi and U.S. government must address. This updated draft still focuses on the longer-term trends that shape Iraq's underlying problems and challenges, but it updates the impact of the ongoing shifts in Iraq’s politics, estimates of the impact of the Coronavirus, and estimates of the impact of massive cuts in world oil prices and Iraq’s oil revenues. It reflects the positive impact of Mustafa al-Kadhimi’s selection as Prime Minister and his immediate focus on Iraq’s need for economic and security reforms. And, it addresses the rise of attacks conducted by ISIS. The insurgent group has taken advantage of the U.S. withdrawal, and even Iran-backed Iraqi Popular Mobilization Forces (PMFs) have proven to be incapable of subduing ISIS.

The analysis now includes comprehensive coverage of both the SIGAR and LIG Quarterly Reports issued in April and May 2020, and it reflects comments in the earlier drafts from a variety of outside experts, as well as from a number of Iraqis following an Internet conference moderated by Munqith Dagher – the CEO and founder of IIACSS research group (Al Mustakillah) in Iraq and a Gallup International board member – that was held in Arabic and English on April 17, 2020.

The document provides a broad historical perspective as well as detailed quantitative analyses of the key political, governance, economic, and military issues involved. It shows in depth that it is not enough to only call for a dialogue or to focus on current issues like the revival of the threat from ISIS and the threat from Iraqi Popular Mobilization Forces and their ties to Iran.

Setting the right goals for a U.S-Iraqi strategic dialogue – and for a more lasting joint effort to create a stable strategic relationship – is a critical step towards creating some form of lasting U.S.-Iraqi relationship, one that will counter both extremism and Iran. At the same time, it is critical to set up a strategic dialogue with Iraq that addresses all three critical structural problems in Iraq’s current position, which make the country fundamentally unstable yet receive so little high-level policy attention – rendering them close to being treated as “ghosts.”

The first such set of “ghosts” is the underlying structure of Iraqi politics and governance. Serious as the immediate tensions and divisions within Iraqi politics have become, the Iraqi government does not provide a clear path to effective leadership, and it is dysfunctional and corrupt at every level. Iraqi politics are deeply divided, and these divisions reflect deep and growing failures. This must change if Iraq is to emerge as a stable and secure state.

The second set of “ghosts” is the Iraqi economy. Iraq now faces massive structural problems in economics that its economy is in near collapse because of the global drop in demand for petroleum caused by both the Coronavirus and the surplus of supply from the “oil war” between Russia and Saudi Arabia. It was weak and unstable even before these crises began, had weak agricultural and industrial sectors, and was affected by Iraq’s divided elite that took a far larger share instead of providing the kind of income distribution that would bring Iraq stability. Divided as Iraq was on a sectarian and ethnic level, it faced further growing divisions because its economy did not serve its people.

Finally, the third set of "ghosts" is “security.” This has been the center of U.S. strategic attention since the invasion of Kuwait and the ISIS invasion of Iraq in 2013. For all the effort the U.S. has devoted to this issue, the end result is that Iraqi security forces still lack the capability to stand alone in order to deter and defend against potential threats like Iran. Iraq’s divided security forces are more haunted by the past than they are to moving towards a clear future.

Neither Iraq nor the U.S. have yet shifted away from a narrow focus on the battle to break up the ISIS “caliphate” and subdue pro-Iranian Popular Mobilization Forces in order to create an effective overall Iraqi capability to maintain its own security. Iraq’s current needs include creating Iraqi security forces that are unified, serve the central government, deal with the continuing threat from ISIS and other extremists, and defend Iraq as a nation from all potential regional threats. These not only include Iran, but they deal with a divided Syria, pressure from Turkey, and the problems arising from establishing stable relationships with Iraq’s Arab neighbors and Israel.

Accordingly, a meaningful strategic dialogue between the United States and Iraq must now begin to address all three of these sets of issues – or "ghosts." It cannot continue to be focused on short term security threats like ISIS and the Popular Mobilization Forces.

At the same time, such a strategic dialogue must recognize that Iraq must find its own answers to dealing with many of its “ghosts,” and the United States cannot help an Iraq that cannot unite or act to the point where it can help itself. It also requires the United States to decide whether the U.S. will commit itself to a sustained effort to help Iraq emerge as a nation that is unified and strong enough to prevent further civil conflict and act independently of Iranian pressure and threats.

The report’s new Table of Contents include: 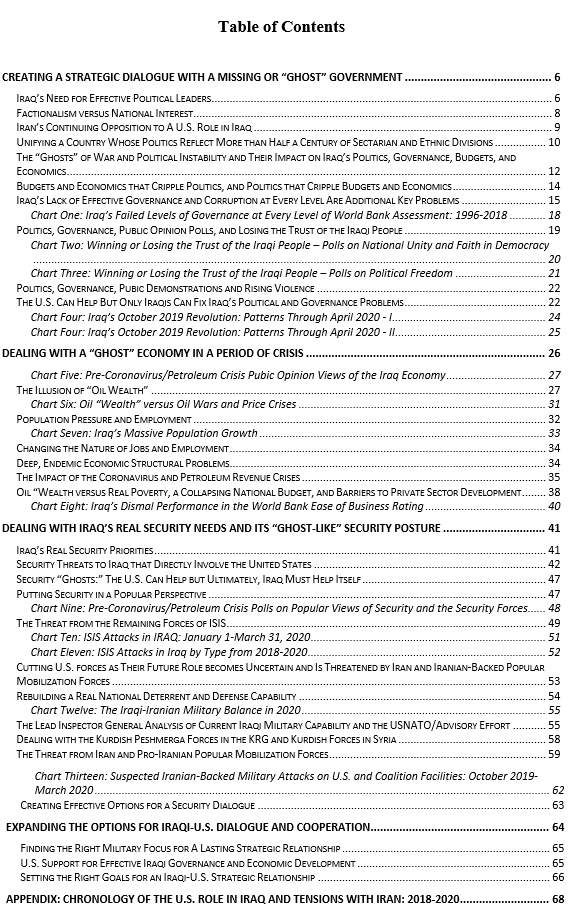 This report entitled, Strategic Dialogue: Shaping a U.S. Strategy for the “Ghosts” of Iraq , is available for download at https://csis-website-prod.s3.amazonaws.com/s3fs-public/publication/200608_Burke_Chair.Iraq_Shaping_Strategy.AHC_.Final_.GH16_edited.pdf

Republicans ramp up criticism of Biden over Afghanistan
The Washington Examiner | Naomi Lin
August 16, 2022
In the News

Setting the Right Conditions for Aid to Afghanistan—and Other Nations as Well
By Anthony H. Cordesman
August 15, 2022
In the News

Appendix A: The Changing Defense Industrial Base: Some Indicators
By Anthony H. Cordesman
July 19, 2022
View all content by this expert