Last spring the outlook was dire for oil exporting states. Just as the Covid-19 crisis was growing, Saudi Arabia and Russia entered a brief but painful price war that left no one at the helm of the oil market for a crucial month. As people around the world settled into working from home and shunned air travel, the oil demand outlook darkened. Inventories climbed and threatened to create a lengthy market glut. It was the worst of times for the Organization of the Petroleum Exporting Countries (OPEC) and its partners in the OPEC-plus group, which were already suffering from years of relatively low oil prices.

One year later, the scars are healing. Strong adherence to the unprecedented OPEC-plus cuts of 9.7 million barrels per day (b/d) agreed on in April 2020 placed a floor under prices and gradually helped to bring the market back in balance. OPEC-plus has tapered the oil cuts in several increments since July 2020, and is now targeting cuts of 6.55 million b/d below the reference production volumes for May. The current plan is for OPEC-plus to raise production by 350,000 b/d this month and 350,000 b/d again in June, and by 441,000 b/d in July. Saudi Arabia plans to unwind its unilateral, additional cut of 1 million b/d by the end of July, beginning with 350,000 b/d in added volumes this month.

The oil exporting states, anticipating a significant uptick in road and air travel, are feeling more confident about the market outlook for the second half of 2021 and beyond. Despite the Covid-19 crisis in India—an important source of incremental demand—the oil market has been buoyed by rising vaccination rates in wealthy countries as well as an easing of lockdowns. The International Energy Agency now forecasts that oil demand will rise by 5.4 million b/d this year and estimates that crude and oil products inventories in developing countries have fallen to nearly the 2015–2019 average. Oil prices reflect optimism about the demand outlook. Brent crude prices rose steadily from November 2020 until this spring and have remained above $60 per barrel since early February, although they have only briefly broken the $70 per barrel threshold. Downside risks remain, including the ever-present possibility of more Covid-19 outbreaks in various countries as well as the possibility of a nuclear agreement between the United States and Iran that could quickly return several hundred thousand barrels per day to the market. But all in all, the major producers are cautiously optimistic. 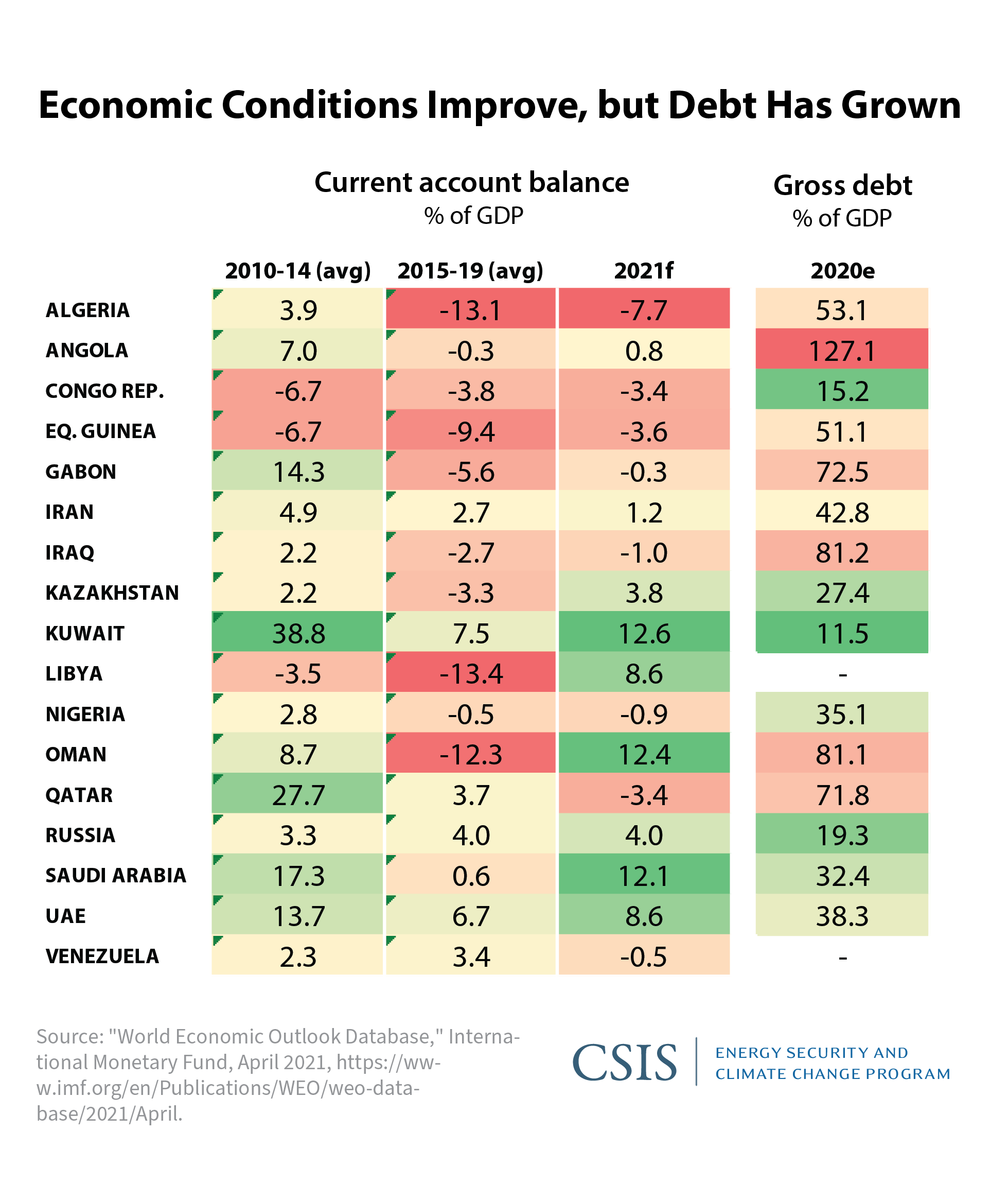 Lower oil prices beginning in mid-2014 forced the OPEC-plus states to adopt textbook maneuvers for commodity exporters facing a sharp revenue decline. First, they drew on foreign exchange reserves to meet spending requirements. Saudi Arabia, for example, drained $258 billion in reserves from August 2014 to August 2017. Second, countries with flexible exchange rates allowed their currencies to depreciate. In Russia’s case, this halted the burn rate of its foreign currency reserves and was a boon to oil companies with dollar-denominated earnings but costs in rubles. Third, the major producers cut expenditures , including on social spending and energy subsidies as well as capital expenditures. Finally, countries searched for more non-oil revenue. Several of the Gulf states introduced value-added taxes (VAT) beginning in 2018. Saudi Arabia abruptly raised its VAT from 5 percent to 15 percent last July, providing an important source of non-oil revenue but increasing consumer costs during an economic downturn. 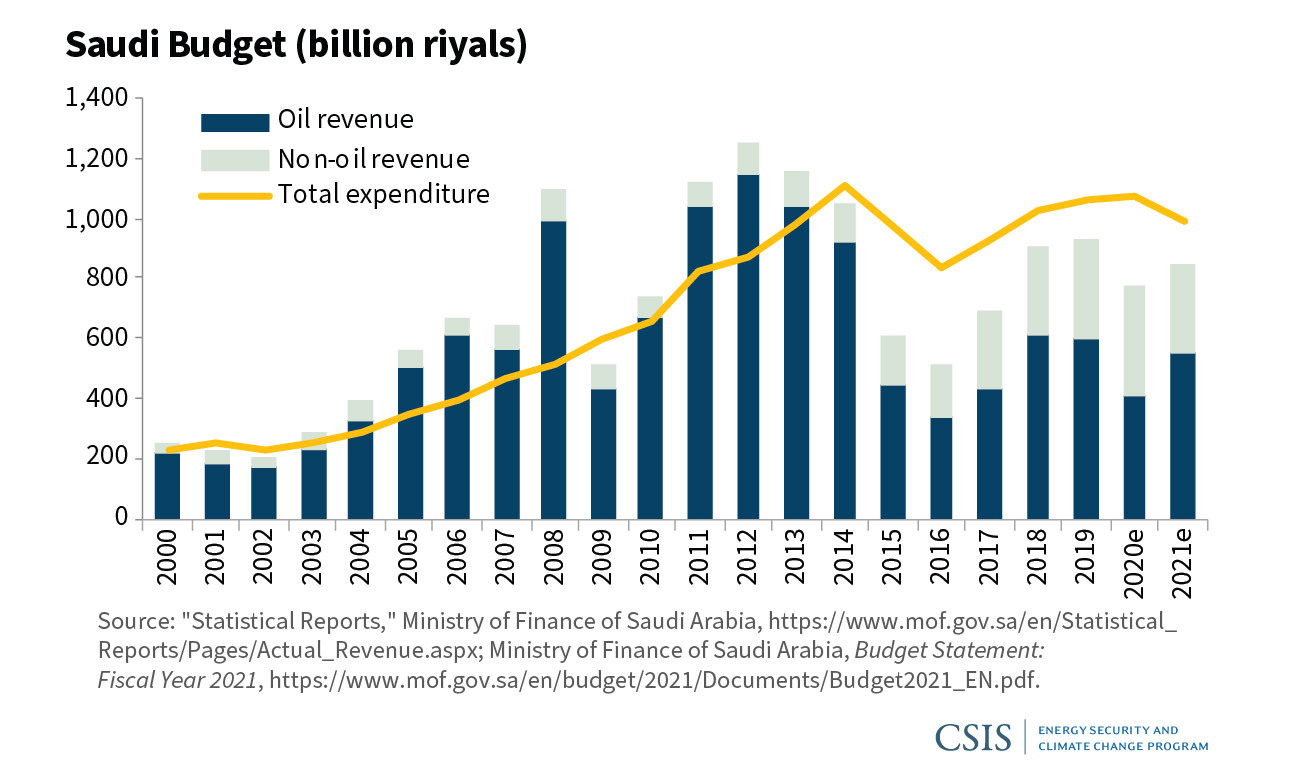 Some of these economic reforms—if sustained—should continue to bear fruit. Last year Saudi Arabia ran a fiscal deficit of $79 billion, or 12 percent of its gross domestic product (GDP), but if prices remain at the current level or higher in the second half of this year, it could produce a budget surplus for the first time since 2013.

However, there is no question that lower oil prices over the past seven years have taken a significant toll, including a much larger debt overhang. According to International Monetary Fund estimates , Angola’s gross debt expanded from 40 percent of GDP in 2014 to an estimated 127 percent of GDP last year, while in Oman, gross debt rose from 5 percent of GDP to 81 percent of GDP last year. The Arab Gulf states, Russia, and Kazakhstan still have relatively low debt levels, but Algeria, Angola, Iraq, and Oman have less room for maneuvering and will face higher borrowing costs. For all of these countries, the uptick in oil revenues in recent months was much needed. 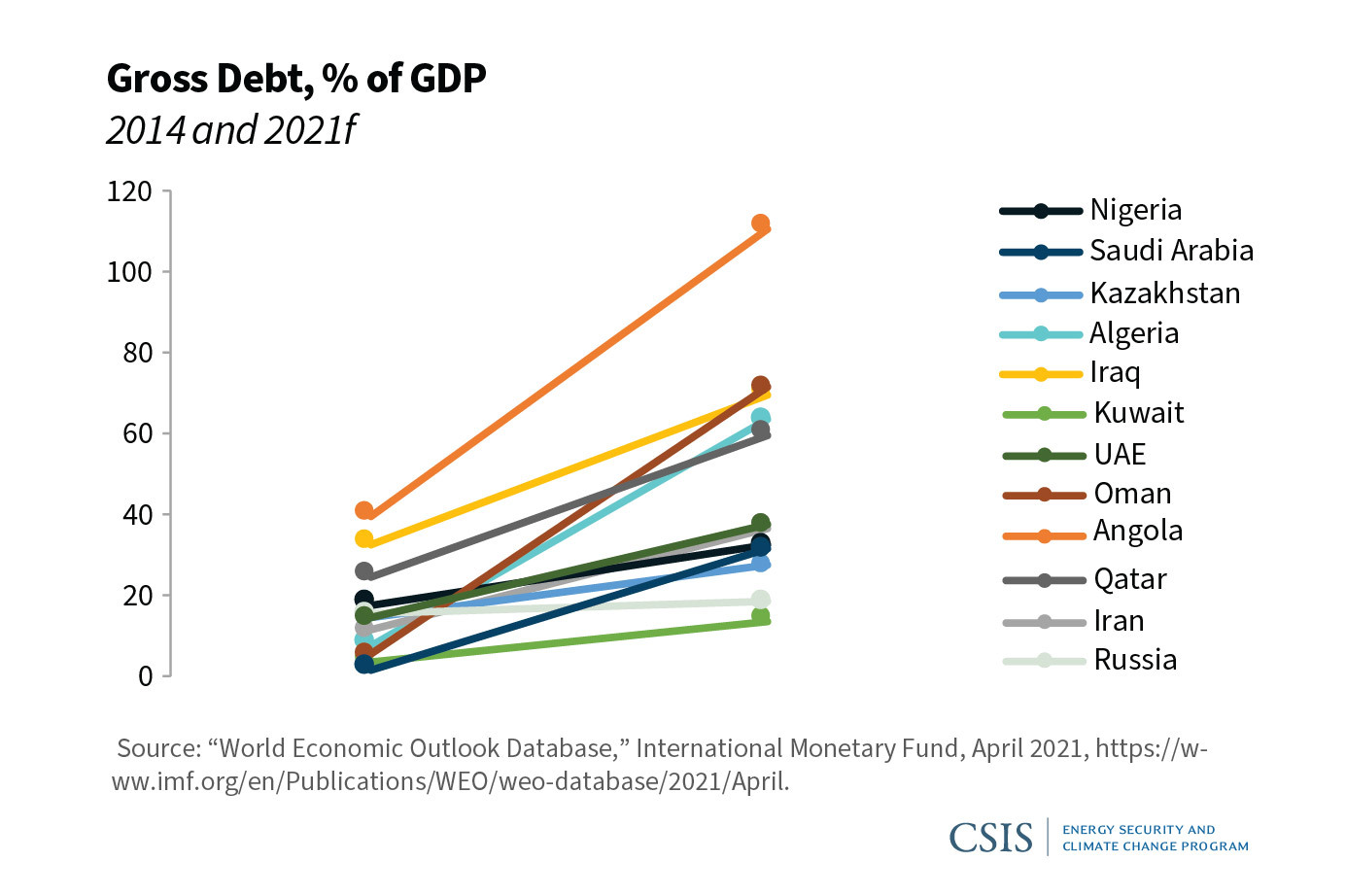 Macroeconomic conditions are likely to continue improving, but the OPEC-plus states still face challenges. Covid-19 has created a huge drain on public resources as countries respond to immediate health and social insurance needs. Economic fallout from the pandemic continues to affect the non-oil sector in many countries, including the tourism and hospitality industries. Higher oil prices will help government efforts to manage the Covid-19 shock, and there will be less acute need to issue new debt. But the damage of recent years will take some time to repair.

Growing optimism about demand suggests that OPEC-plus will feel reassured that the market can accommodate more volumes in the coming months. Still, policymakers probably do not feel they can let down their guard just yet. The producers’ club will continue to closely monitor demand conditions in its monthly meetings . Despite stronger market fundamentals, OPEC-plus—led by Saudi Arabia—is likely to remain focused on strong compliance with cuts to ensure a gradual return to health of both the oil market and the economies of its member states.