Struggling to Survive: Gender, Displacement, and Migration in Taliban-Controlled Afghanistan

Taliban leaders are currently implementing a raft of discriminatory measures to effectively erase women’s participation in civil life in Afghanistan. For many women around the world, such measures are unthinkable, almost impossible to comprehend. In Afghanistan, the changes are not surprising given its past experiences of the Taliban, but they are nevertheless profoundly terrifying.

The measures are forcing Afghanistan backward, limiting the engagement of around half its population at a time in which one of its largest humanitarian crises is underway—a crisis that will only be made worse through measures involving, for example, barring women from returning to their jobs, requiring a male relative to accompany them in public spaces, prohibiting women from using public transport on their own, imposing a strict dress code on women and girls, and preventing girls over the age of 12 from returning to their education. The outlook is grim, made worse by reports of female protesters being abused, detained, or even having disappeared for publicly voicing their disagreement to the changes.

Beyond Taliban oppression, Afghan women also face long-term sociocultural factors that restrict their access to education, work, and social services, such as health and justice. Before the Taliban takeover, insecurity was the leading cause for women leaving Afghanistan at 42 percent of women, significantly higher than for men. Lack of rights, personal and family reasons, economic reasons, and lack of social services were among the other reasons, including fleeing from a forced marriage or domestic violence.

The current economic collapse and increased livelihood pressures across Afghanistan have the potential to severely increase the plight of Afghan women due to upsurges in domestic violence and a decrease in access to food and health services.

The recent closures of many safe houses for women who suffer domestic violence have left Afghan women even more vulnerable. It is difficult to imagine a more perilous time for Afghan women and girls, made starker in the wake of small positive steps toward reducing systemic discrimination taken over the last decade, which were radically overturned by the Taliban in a matter of weeks in 2021. It has been over 150 days since girls aged 12 or older were banned from going to school, with no signs of turnaround, while boys were able to resume their education after a short disruption.

Beyond the gender-based discrimination, Afghanistan is dealing with a humanitarian crisis, with almost 700,000 people internally displaced due to conflict and disaster, more than 1.2 million returned Afghans from Iran and Pakistan, and 14 million people (or 35 percent of the country) facing hunger and in urgent need of food. The pressure on Afghans to seek refuge elsewhere, especially having lost everything due to the need to escape escalating conflict and violence will be very high, although so will pressure on states to impede movements and stem flows, especially through traditional routes to Europe via Iran and Turkey.

The gender implications are particularly profound as dangerous migration is highly gendered, leaving women and girls behind, compounding vulnerabilities. A large proportion of those leaving Afghanistan are young men and unaccompanied boys. Women and girls are more likely to stay in Afghanistan longer and make up higher proportions of family-related movements, such as family reunion programs.

In previous waves, unaccompanied women and girls constituted only 13 percent of the migration flows from Afghanistan compared to 50 percent for unaccompanied men and boys. Females who migrate are also on average three years older than their male counterparts.

Even if they want to leave, women and girls face higher costs for their journey, as they have to rely upon expensive smugglers. The higher costs mean women are usually priced out of irregular migration even when they face serious risk to their lives and rights. There are also indications that women use different routes compared to men and are more likely to use air as a mode of transport because it poses less risk. For those women who embark on the more dangerous types of journeys, most experience some form of sexual and gender-based violence (SGBV) during the migration journey.

It is for these reasons that the demographic characteristics of Afghans who have relied on high-risk irregular migration to seek safety show very strong gender differences. Historically, this applies to minority groups, such as Afghan Hazaras, with predominantly young men and boys having migrated both in the immediate region, such as to Pakistan and Iran, and farther afield, including to Europe, Southeast Asia, and Australia. Very few Hazara women and girls take such perilous journeys. 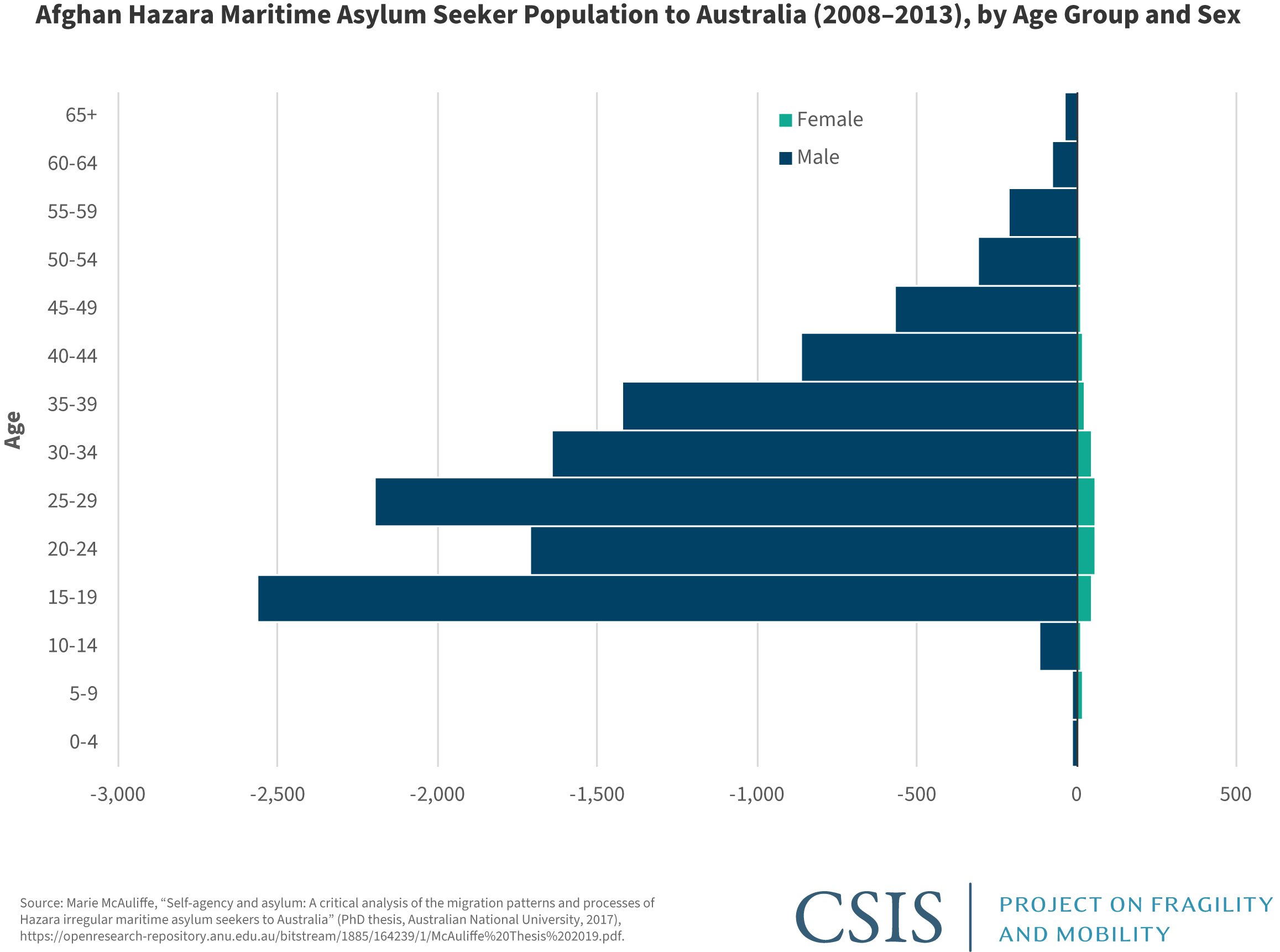 Afghan women are being pressured to become socially invisible and are now unable to hold any position of authority in public life in Afghanistan. Their rights to education and work exist only in promises that might never be realized, just as they did during Taliban’s rein in the 1990s. Considering increasing highly repressive restrictions at home and the lack of opportunity and ability to leave, the women and girls of Afghanistan are severely disadvantaged and becoming more vulnerable by the day.

In their quest for recognition and the removal of sanctions, the Taliban are facing significant demands to improve women’s rights, among other issues. This has pushed the Taliban to commit to reopening all girls’ education by the end of March 2022. The international community should utilize the negotiations with the Taliban to achieve tangible and immediate progress on women's rights, including as a condition to access funding. In addition, humanitarian and evacuation programming need to take gender sensitivity into account and properly provide for the needs of Afghan women and girls. With few safe migration options available and surmounting pressures inside the country, survival for many Afghan women and girls will depend on access to humanitarian assistance; access to the Afghan labor market, education system, and public services; and in some cases, evacuation from the country, particularly for ethnic minorities and other groups targeted by violent extremists. Now is the time for the international community to use its considerable leverage to help Afghan women and girls.

Marie McAuliffe is a senior associate (non-resident) with the Project on Fragility and Mobility at the Center for Strategic and International Studies in Washington, D.C., and the head of migration research at the International Organization for Migration. Mohib Iqbal is a former World Bank program lead consultant in Kabul and an independent economist. The opinions, comments, and analyses expressed in this article are those of the authors and do not necessarily represent the views of any of the organizations or institutes with which the authors are affiliated.