A nineteenth-century British song about war with the U.S. contains a line that is worth bearing in mind as Congress contemplates regulating big tech: “We don't want to fight but by Jingo if we do, we've got the ships, we've got the men, we've got the money too.”

That final phrase deserves attention. Not having "the money" makes it hard to provide for defense. European countries, after decades of slow growth, are discovering this as they confront Russian aggression. Thanks to its economic growth, the United States has the resources it needs for national security but proposed antitrust legislation could change that.

National security depends on more than an ability to field advanced weapons or large forces. It is based on economic strength. Economic strength creates international influence and power. Economic strength now requires a strong technology sector that includes strong tech companies. This conclusion may be uncomfortable for some, but the alternative, a weak tech sector, and weak companies, is indefensible on its face (despite appeals to pro-competition rhetoric).

No one argues that "Big Tech" should not be regulated, not even Big Tech. There are objectionable behaviors in the collection of personal data and self-preferencing that should be changed. But any regulation should not be done in a way that kills U.S. innovation. This sounds extreme, but if we look at the European experience, it is a real risk. This snapshot based on World Bank data shows what happens to economic strength (measured by national income) if a country gets policy wrong. 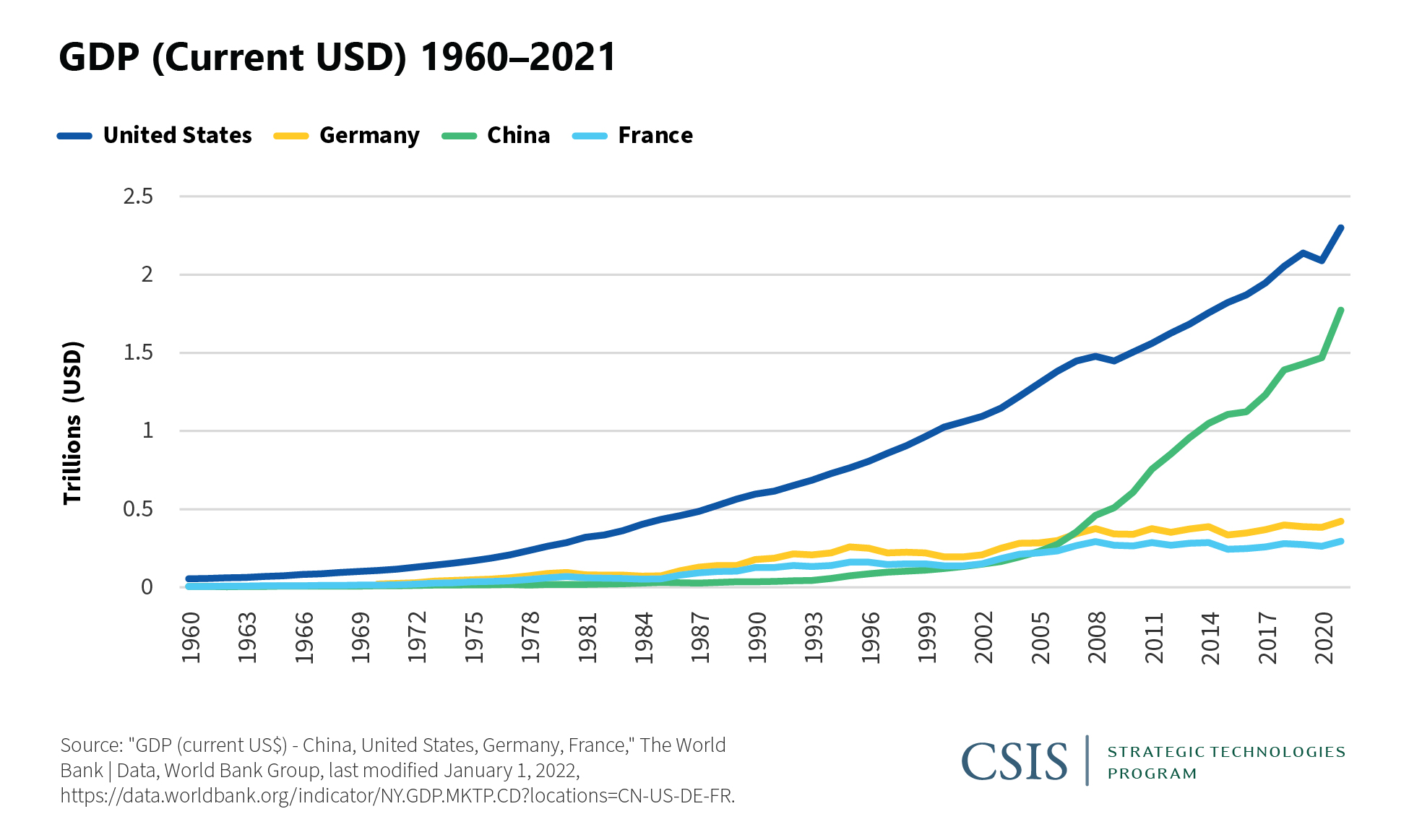 Two conclusions are immediately apparent from this chart. First, China's economy is not displacing the United States’; it is displacing Europe (illustrated here by the two largest EU economies, Germany and France, which together account for 36 percent of EU GDP). Second, if the U.S. economy had grown at the same rate as Germany and France, it would be a quarter of its current size, and China would have surpassed it in the first decade of this century. It would be a very different contest with China (or perhaps no contest at all) if the United States followed the EU model. Technological innovation does not flourish in an environment of risk-averse and burdensome regulation. The ability to create new technologies, crucial for economic and military strength, requires a regulatory culture that accepts entrepreneurship and risk in a framework of supportive laws. Changing this creates strategic risk.

Many factors determine economic growth, but one of the most important is the ability to create new technologies, particularly digital technologies and services. Digitization is the best avenue for continued growth. Obstacles to digital transformation are one reason Europe has fallen behind. Europe has very robust research capabilities and many citizens with a strong entrepreneurial bent, but something gets in the way of letting European entrepreneurs turn research into commercial success.

Regulation is the biggest obstacle. A May 2022 study published by the National Bureau of Economic Research (NBER), a nonprofit academic organization, found that "by raising developers' costs and reducing their revenue," privacy regulation may have led to "a 'lost generation of valuable apps." Europe was unable to fully realize the benefits of 4G telecom modernization and the app economy it created, and it will likely be unable to realize the benefit of new generations of telecom, such as 5G. The study concludes that "whatever the benefits of [General Data Privacy Regulation's, or GDPR’s] privacy protection, it appears to have been accompanied by substantial costs to consumers."

An earlier NBER Report found that privacy regulation led to lower investment in technology in all sectors and potentially fewer jobs. It stated that "evidence suggesting negative and pronounced effects following the rollout of GDPR on the number of venture deals, the size of those deals, and the overall amount of dollars invested." Europe now wishes to revive its tech sector, but observation suggests European tech has been battered and diminished, first by the 1995 Data Protection Regulation and now by a flurry of new regulations.

The same result appears if we look at the number of "unicorns" (tech startups worth a billion dollars) and the age of leading companies. The United States has the most unicorns, followed by China. Europe, a population of 450 million, has far fewer than the United States and only slightly more than Israel, a population of 9 million. Company age is another indicator of technological dynamism. The five biggest European companies are more than one hundred years old. The five biggest U.S. companies (targets of congressional ire) are less than 30 years old. Europe remained strong in building the technologies of the twentieth century, but not the twenty-first, and this has affected both its economic strength and its defense.

Analogy is a weak form of reasoning, but it guides some of the thinking about big tech. Breaking up the Bell System in 1982 unleashed a wave of innovation. By analogy, some believe that breaking up big tech now will have a similar effect. Unfortunately for this argument, it is no longer 1982. There is no evidence that the very strong U.S. innovation system is hampered by monopolies. Some antitrust proposals, such as preventing a startup from selling itself to a bigger company, would eliminate significant incentives to innovate. It would be a bold political leader who is willing to gamble the world's most successful innovation system for a handful of theories and promises. Breaking up Big Tech and hoping that increased competition will compensate is not an experiment to try in the middle of an intense and growing conflict with China.

It should be noted that the steady decline of the tech sector in Europe has been accompanied by a stream of pronouncements about the importance of innovation and how it will flourish in a regulated environment, despite all evidence to the contrary. This kind of wishful thinking can now be heard in Washington.

Europe's economic decline is of deep concern for the United States. The lack of a strong technology base (and the resultant economic difficulties) in Europe is not in the United States’ interest. Faster growth in EU economies can only be based on rebuilding Europe's tech sector. This is essential in what has become a contest between democracies and dictators. But while the European Union works through the policy dilemmas that stand in the way of rebuilding, the United States should not duplicate them.

The formula for policymakers to use is that national security depends on a strong economy, and a strong economy depends on the ability to innovate, and innovation requires a regulatory culture and supportive laws. This does not mean no regulation—the objectional behaviors that grew up with the "light touch" approach to regulation adopted in the 1990s to spur the internet's growth and the failure of privacy policy in the United States are problems that need to be remedied. But any remedy should take into account both the cost of EU-style tech regulation and the dangers of the hostile Asian dragon that is in hot pursuit.

James A. Lewis is senior vice president and director of the Strategic Technologies Program at the Center for Strategic and International Studies in Washington, D.C.

© 2022 by the Center for Strategic and International Studies.