Trade Politics Aren’t What You Think

To listen to this year’s presidential debate, you would think that the United States is about to walk away from over 80 years of commitment to the more open global trading system that has defined our ascent as the world’s largest trading nation and premier investment destination. The nominees of both major parties have come out in opposition to the Trans-Pacific Partnership (TPP) agreement, and critics of globalization are one-upping each other in the most colorful way to describe the raw deal the United States is getting in international trade.

In this, those critics are out of step not only with enduring U.S. interests but also with the majority of voters. Polls show voters understand the power of trade to boost the overall economy and consumer choice. And since all politics is about the future, people seeking elected office should take note of the overwhelming support for free trade both by those under 30 and the fastest growing segment of voters. 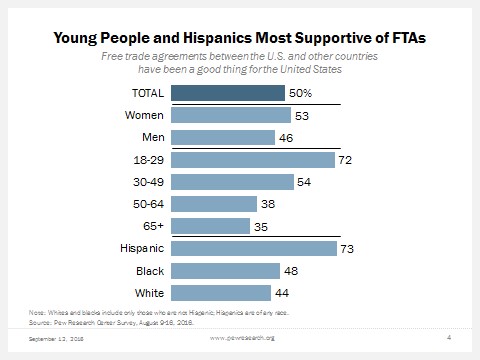 Note: Whites and blacks include only those who are not Hispanic; Hispanics are of any race.
Source: Pew Research Center Survey, August 9–16, 2016. Reprinted with permission.

The presidential hopefuls are tapping into another well-placed voter frustration: that Washington has not honored the other end of the bargain by helping workers adjust to the forces of globalization and technological change.

To be sure, after more than 14 years at war, Americans are tired of bottomless foreign commitments. But that doesn’t mean a new isolationist turn is inevitable. In fact, such a turn is simply unavailable to the next occupant of the White House. A return to early twentieth-century isolationist policies isn’t even an option given that nearly a quarter of our economy involves the external sector, perhaps $7 out of $10 of our currency circulates overseas, and every major trade route in the world is protected by the U.S. Navy and Air Force. Even before 1920, U.S. companies earned more on sales by their foreign affiliates than from direct exports. More Americans now work overseas than at any time in our past. No country has done more to make the modern world in its image, exporting its rules and its corporate cultures. Americans know instinctively that the past is a land we cannot visit. There is no “tuck in” option, so the only question for the next president is how those global interests are protected.

Everyone knows that trade is political poison. Except that it isn’t. Trade politics arguably are never the deciding factor in House or Senate races. It’s instructive that pro-trade Democrats have not faced primary challengers . 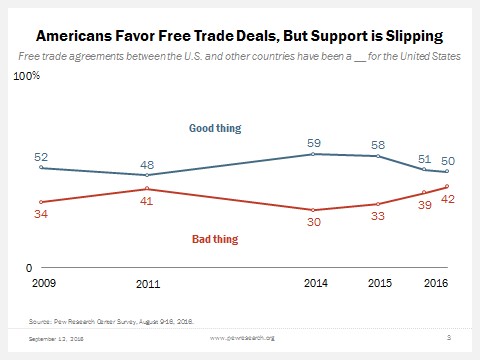 So too, everyone knows that Americans are simply angry and deeply unhappy. It’s not that simple. A recent Gallup survey had 85 percent of Americans saying they were “satisfied” with the way things are going in their personal lives—consistent with the range for over two decades.

There is genuine anger, focused at government and policy elites. On the trade front, the beginning of wisdom is recognition that Washington broke a postwar bargain with workers. In tacit exchange for supporting U.S.-led global trade liberalization since the 1950s, the government promised to make aggressive use of trade laws to respond to import surges and unfair practices while supporting displaced workers through trade adjustment assistance. Well into the 1970s and early 1980s, there was a shared consensus that U.S. competitiveness could outrun the growth of Europe and Japan and maintain an insurmountable lead over emerging economies like South Korea, Thailand, or those in Latin America. That was a good bet until the very nature of manufacturing changed, productivity gains proved to have limits, and U.S. wages became stagnant for over three decades.

Trade remedies worked but were never designed to accommodate the headwinds of elemental shift in manufacturing technologies that successively swamped textile, steel, auto, and electronics industries here. From tee shirts to televisions, the security of a huge domestic U.S. market was its own impediment to adaptation.

But the real tragedy was an unacknowledged choice both by labor unions and conservatives to abandon the idea that workers—whether disrupted by trade or simple change in their industry—deserved policies that allowed them to adapt. Trade adjustment assistance (TAA) was characterized by unions as burial insurance because it meant starting over again in organizing a retrained—and likely relocated—workforce at a time when conservatives were busy passing right-to-work laws and fashioning state policy opposing organized labor. So too, the “starve the beast” mantra of the Reagan years declared open warfare on all forms of government spending, especially social policies viewed in their entirety as wasteful. Criteria were tightened. Only about 100,000 Americans a year get any help from TAA now—less than the total number of layoffs in the current oil industry downturn alone. We pay lip service to the need for a smarter, more nimble and adaptive work force, but we are unwilling to support it with policies and programs that change lives.

If a failure to adjust isn’t working, what will? There are several proposals that require the winners from globalization to pay for the real costs of adjustment. U.S. corporations rightly complain that our tax system has locked some $2 trillion in revenue beyond our borders. Bringing it back with a modest toll assigned to adjustment—and making a dedicated tax a continuing feature of overseas earnings—is reasonable and directly related to the cause of dislocation. We have the delivery system of the vast community college infrastructure. It seems sensible to consider how some significant part of revenue from foreign investments could help support the transformation of our current workforce into the one U.S. companies say they need. Why shouldn’t those U.S. multinationals help design the programs and policies that will address their labor shortages? There is no deficit of ideas about retraining at the state and local level. While Congress passed and President Obama signed a renewal of TAA in June 2016, it included no new initiatives to support workers adjusting to a new economy. The next Congress must consider revitalizing and expanding TAA, or risk driving its approval rating below the current dismal 10 percent.

Professor Robert Lalonde of the University of Chicago has proposed comprehensive wage insurance to backstop workers. Edward Alden of the Council on Foreign Relations has chronicled the shortcomings of the U.S. retraining system, and his forthcoming book Failure to Adjust suggests several remedies that the new president can adapt to a tax and trade policy focused on rebuilding human capital and infrastructure for the challenges ahead. Any transition team will have plenty of options. What is needed is bipartisan recognition that a commitment to significant adjustment training is no longer optional, either in economic or political terms. What is required is the political will to rebuild trust in trade by generalizing its benefits. The price of continued failure is more broken politics and a far less adaptable economy and work force.

Kevin G. Nealer is a senior adviser with the Simon Chair in Political Economy at the Center for Strategic and International Studies in Washington, D.C.

© 2016 by the Center for Strategic and International Studies. All rights reserved.
Written By

Most Recent From Kevin Nealer

The Trade War—What Is Not in the Price
By Kevin Nealer
July 18, 2018
Commentary

How the United States and China Could Avoid a Trade War
By Kevin Nealer
August 1, 2017
View all content by this expert