Turkey Is Not an Easy Ally, But It’s Not Time to Write it Off

President Recep Tayyip Erdogan of Turkey is no stranger to the Oval Office. Donald Trump will be the third U.S. president he has met there. Suffice it to say, none of these conversations has been easy given the friction between these two NATO allies, beginning with the run-up to the 2003 Iraq War through to the current conflict in Syria.

But the May 16 meeting could be the toughest yet—as it should be, with the goal of setting the U.S.-Turkey relationship back on a more productive course. In its current form, the relationship is crisis driven, episodic, and rarely advances the long-term interests of either country.

By all reports, Erdogan will come to this meeting in that same rut, carrying an immediate request that the United States reverse its widely reported decision to directly arm the Syrian Kurds in their fight against ISIS. Trump may be tempted to spend his time smoothing Erdogan’s ruffled feathers on the issue, hearing him out, and agreeing on a limited set of next steps on Syria cooperation. Or, Trump could begin to reframe the bilateral relationship, not only to address current tensions over Syria but also to consult with one another more broadly, and at times to simply “agree to disagree” the way the United States does from time to time with some of its closest allies (think of France and Germany).

The unfortunate truth is that under the past two administrations, the U.S. approach to Turkey has been captive to its latest Middle Eastern regional security problem. For its part, Turkey has evolved into an increasingly challenging ally, from its unhelpful role as a proxy player in neighboring conflicts, to turning a blind eye to radical networks, to becoming increasingly authoritarian at home. This has led some to conclude that perhaps Turkey has lost its previous anchoring with NATO and the West, and it’s time to cut losses. The president of the Council on Foreign Relations, Richard Haass, recently tweeted, “Good to see Trump admin arming Syrian Kurds. If Erdogan cancels visit here, no great loss given his authoritarian rule & unhelpful Syria role.”

But is it really time to write Turkey off?

Lately, the major sticking point in U.S.-Turkey relations has been U.S. support to the Syrian Kurdish People’s Protection Units (YPG) over the vociferous objections of Turkey. As the counter-ISIS fight turns to the predominantly Arab city of Raqqa, the United States has decided to throw its full weight behind the Syrian Democratic Forces—which include the YPG—by directly arming them, judging them as the most capable local security forces to push ISIS out. Yet, the YPG is directly linked to the northern-Iraq-based Kurdistan Workers’ Party (PKK), designated a terrorist organization by both the United States and Turkey. The YPG’s, and thus the PKK’s, extension of territorial control across northern Syria prompted Turkey to mount the military intervention in 2016 named Operation Euphrates Shield. Turkey’s goal was to prevent the connection and consolidation of multiple Kurdish cantonments along Turkey’s southern border. For Turkey, the PKK-YPG entrenchment is an existential challenge and provides cover for Erdogan’s repressive approach to domestic dissidents in Turkey, including many recently jailed Turkish-Kurdish political leaders. As a result, Turkey will likely continue to conduct limited strikes or perhaps further ground incursions into northern Syria as well as Iraq to disrupt Kurdish territorial control and supply lines—much as they have since the mid-1990s. The United States will still face the dilemma of addressing legitimate Turkish concerns about the future of the PKK and walking away from its YPG partner that has bled alongside U.S. forces in Syria. 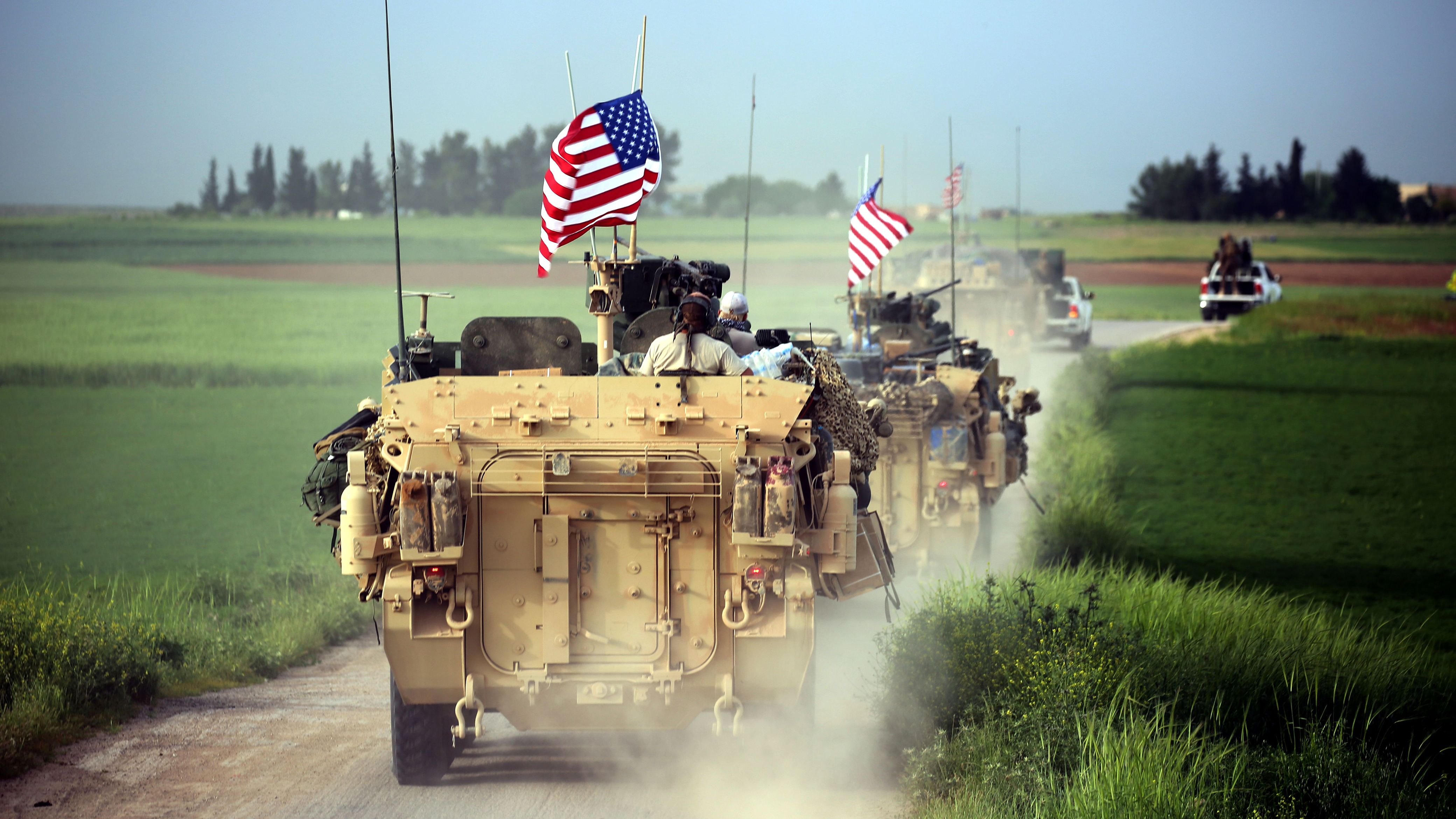 U.S. forces and YPG fighters near the border with Turkey - DELIL SOULEIMAN/AFP/Getty Images


And though this dilemma has sunk the U.S.-Turkey alliance to a memorable low point, the time is ripe for a new frame for the alliance that is appropriate for the twenty-first--century security environment and not based on outdated Cold War modalities. Attempts at just that were made under the Bush and Obama administrations during both crisis and non-crisis moments, but those efforts largely went nowhere. Part of the problem in both cases was an overly aspirational view of what might be possible, including increases in trade and a shift of the relationship from its roots in defense and security interests. There was a notable exception in 2007, when Turkey and the United States advanced a detailed framework for counter-PKK cooperation. But this effort failed to do much for the overall relationship because it was effectively “pocketed” by the Turks as the least the United States could do after destabilizing Iraq. Under the Obama administration, exhaustive energy was spent on securing an agreement to base a missile defense radar in Turkey as a way of shoring up its commitment to NATO. Turkey ultimately agreed, but the effort proved to be merely tactical, with no meaningful impact on U.S.-Turkey ties.

Moving forward, both allies should be realistic about what the alliance can do, given political realities on both sides, deep distrust, and a divergence in democratic principles and values. From the U.S. perspective, continued effort should be made to bring Turkey in closer to have frank dialogue about what is happening regionally. This dialogue should include what to do about Syria and about the erosion of democracy and human rights in Turkey—even as the United States faces its own domestic political challenges. Simply pushing these items aside or agreeing on mere tactics does nothing for the long-term health of the relationship and risks a constant reversion to the status quo ante.

Make no mistake, security must be the lynchpin of this new strategy, with Syria as the first order of business. But security must be viewed more sustainably. Turkey must do its part to facilitate humanitarian operations in Syria and cease its crackdown on international nongovernment organizations assisting those efforts. There also needs to be a demilitarization process for the YPG and PKK, brokered by the United States or another jointly trusted interlocutor. It’s an impossibility for the Turks to agree to any modus vivendi with these groups without such an end state in mind, and the United States has been reckless in pushing forward with these groups in recent years at the expense of its NATO ally.

The United States also should consider appointing a special envoy with expertise on both Turkey and regional dynamics, as it did with General Joe Ralston during the last nadir in relations, circa 2006––2007 (resulting in the singular success in relationship “resets” cited previously). Priorities for untangling the Kurdish dilemma should entail further strengthening exchange of military intelligence; pressing the YPG to delink from the PKK, focus more on their northern Syrian identity, and commit to inclusion in a post-conflict, decentralized Syria (including steps to build governance and security in areas where they will be deemed credible and sustainable security providers by local civilians); and engaging Turkey in a constructive frame for the future of Syria’s Kurds that draws lessons from the largely now-pragmatic relationship between Turkey and Iraq’s Kurdistan Regional Government.

For its part, Turkey must elevate its vision beyond tactics and renew its anchoring to the United States and the West. Turkey and the United States both face the scourge of terrorism, as well as an increasingly complicated security environment in the Black Sea and Eastern Mediterranean—other obvious areas of focus. Despite Turkey’s warming relations with Russia, the United States and Turkey still have more to gain through military and intelligence cooperation at the core of the NATO alliance than in continuing to drive a wedge in their bilateral relationship. U.S.-Turkey cooperation will also be important for addressing Iran’s destabilizing activities in the region. A possible reboot of a civilian-led, U.S.-Turkey High-Level Defense Group (first established during the Reagan administration) could frame these strategic objectives, though troubled civilian-military dynamics in Turkey since the July 2016 coup attempt will undoubtedly complicate implementation.

From the U.S. perspective, Turkey is not an easy ally under any president, and from the Turkish perspective looking at the United States, the corollary holds true. Problems with Turkey will only fester and grow worse if not addressed as part of a new strategic approach. Tough and honest discussion with an old ally to establish new guidelines for the relationship requires more diplomatic and defense engagement than merely tending the garden. A new strategic framework for Turkey is critical in an increasingly contested security environment, where the United States and its allies have much at stake.

© 2017 by the Center for Strategic and International Studies. All rights reserved.
Photo credit: OZAN KOSE/AFP/Getty Image