The Turkish Economic Slowdown in 2018

On March 11, the Turkish Statistical Institute (TUIK) released its quarterly Gross Domestic Product (GDP) figures through December 2018, providing a clearer picture of how the Turkish economy fared last year. The data confirmed that after having posted 7.4 percent and 5.3 percent growth in the first and second quarters and a dismal 1.8 percent in the third quarter, the Turkish economy experienced its sharpest reversal since 2009 contracting by 3 percent in the last quarter of 2018 year-on-year, thus officially entering a technical recession. As a result, annual GDP growth fell from 7.4 percent last year to 2.6 percent, well below even the revised government target of 3.8 percent announced in the New Economic Program (NEP) in September 2018. 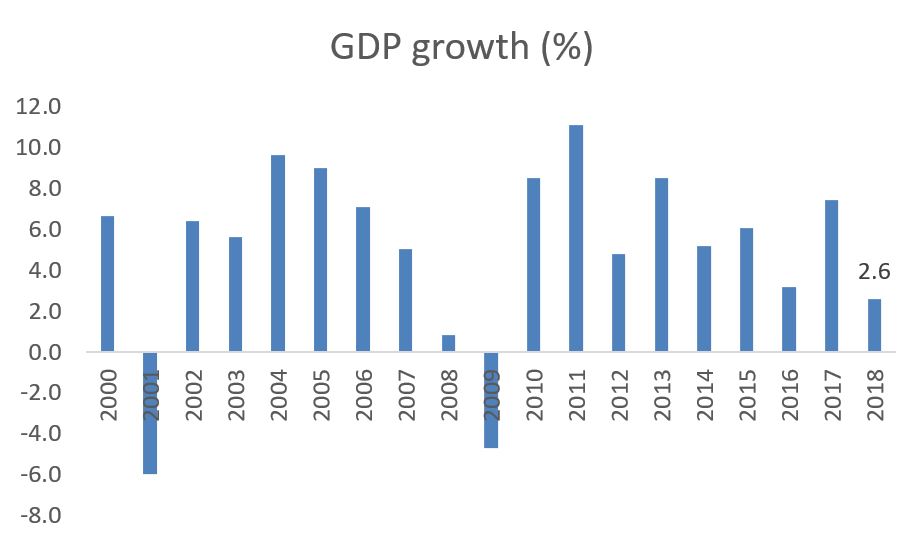 In the last quarter, private consumption, which constituted more than half of GDP, turned negative for the first time since 2009; it shrank by 8.9 percent year-on-year, posting a dismal growth of only 1.1 percent for the year as consumer confidence index—which includes financial and economic situation expectations and probability of saving and indicates a pessimistic outlook when it is below 100—dropped from 72.3 percent to 58.2 percent between January–December 2018. Gross fixed capital formation (investment), which constituted around one-third of GDP, contracted by 12.9 percent in the last quarter year-on-year and by 1.7 percent overall in 2018. Government spending only increased by 0.5 percent in the last quarter and by 3.6 percent annually. The contributions of agriculture and services dropped by 0.5 percent and 0.3 percent respectively while manufacturing and construction, a critical driver of growth in the last decade, were hit hardest, contracting by 6.4 percent and 8.7 percent in the last quarter. The only major exception to the negative trend was net exports, which grew by 10.6 percent in the last quarter and by 7.5 percent overall in 2018 with the help of a significantly weaker Turkish Lira (TRY).

While government intervention in December increased minimum wages by 26 percent to 2,020 TRY ($380), per capita income in U.S. dollar (USD) terms actually fell by 9.2 percent, in line with the fall in GDP from $851 billion to $784 billion. Having declined for five years in a row, it is now at $9,632, below the symbolically important $10,000 level for the first time in a decade. 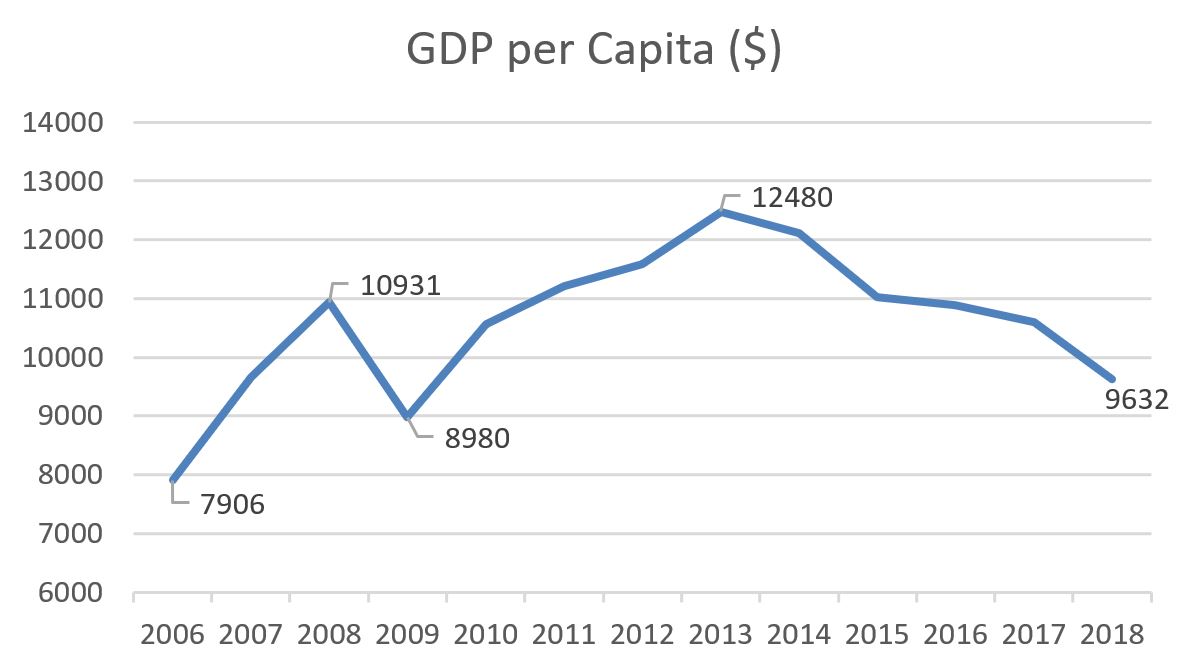 The sharp reduction in the current account deficit was driven by lower energy prices and the narrowing of the trade deficit as well the acceleration of the slowdown in economic activity in the last two quarters of the year. The depreciation of the TRY and weaker domestic demand led to a fall in imports while boosting exports and lower energy prices and an increase in tourism revenues actually contributed to a current account surplus between August-November 2018. As a result, the deficit shrank from $47.3 billion in 2017 to $27.6 billion in 2018, its lowest level since 2009 when it was $11.3 billion, reducing to some extent external financing need.

The trade balance improved in the second half of the year as a result of the fall in domestic demand and the companies resorting to their inventories instead of importing intermediate goods. Exports recorded an increase of $11 billion to $168 billion while imports fell by $10.8 billion to $223 billion, thereby reducing the trade deficit for 2018 to $55 billion from $76.8 billion in 2017.

The fall in foreign investor confidence in the economy due to macroeconomic imbalances resulted in net capital outflow in 2018. Having helped finance the current account deficit (CAD) in 2017, portfolio investment turned from a $24.4 billion inflow in 2017 to a $3.9 billion outflow in 2018. Net foreign direct investment in Turkey—the amount invested by foreigners in the economy minus Turkish funds sent abroad–increased from $8.8 billion in 2017 to $9.5 billion in 2018 with real estate purchases by foreigners of $5.91 billion constituting more than 60 percent of the overall total. With capital outflows surpassing inflows, especially during the August currency crisis when capital flight reached $14.8 billion and was partially reversed only after the sharp Central Bank of Turkey (CBRT) rate hike in September, the CAD was financed by reserves and net errors and omissions, the unsourced capital item on the balance sheet.

$10.3 billion, or one-third of the CAD was financed by the CBRT through its foreign currency reserves, while the record net errors and omissions inflow of $21.1 billion (the highest on record, exceeding the 2016 total of $11.1 billion) financed the rest. Official reserve assets of CBRT fell by 13.6 percent to $93 billion, driven by the fall in foreign currency reserves from 82.6 billion to 71.3 billion (partly due to the CBRT decision to lower banks’ foreign exchange reserve requirements to provide liquidity) while gold reserves also fell from 23.5 billion to 20.1 billion. Excluding its liabilities to the banking system, net CBRT reserves were estimated at $40 billion at year-end. 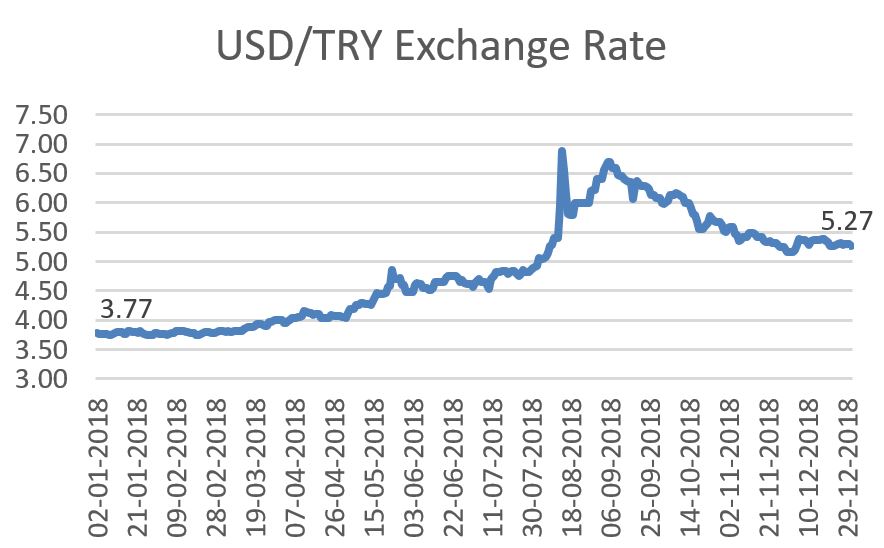 The TRY lost 40 percent of its value against the USD during the year. Having begun 2018 at 3.77 and briefly dipped below 7 against the USD on August 10 at the height of tensions with the U.S. over the detention of Pastor Andrew Brunson, the TRY started to recover part of its losses following the CBRT move to raise the policy rate by 625 basis points to 24 percent, its biggest hike during the nearly 16 years of Justice and Development Party (AKP) rule, and Brunson’s release. 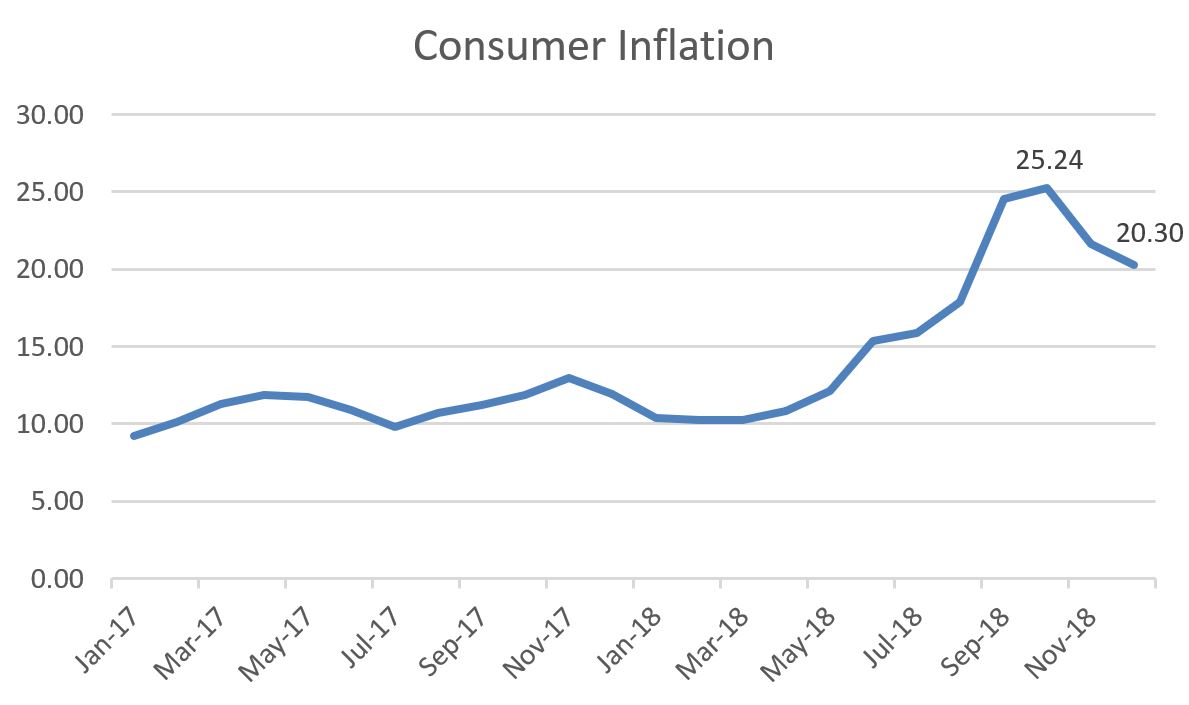 Even as the TRY stabilized relatively in the last three months of the year, consumer inflation, which had exceeded double digits in 2017 rose to 17.9 percent by the end of August and then to 25 percent in October, before recovering to 20.3 percent at the end of the year according to TUIK figures. The average difference for 2018 between consumer and producer price inflation averaged 10.5 percentage points, with producer prices increasing by as much as 46 and 45 percent year-on-year in September and October not all of which was passed on to customers. High inflation also negatively affected real wages, further weighing on consumer spending. 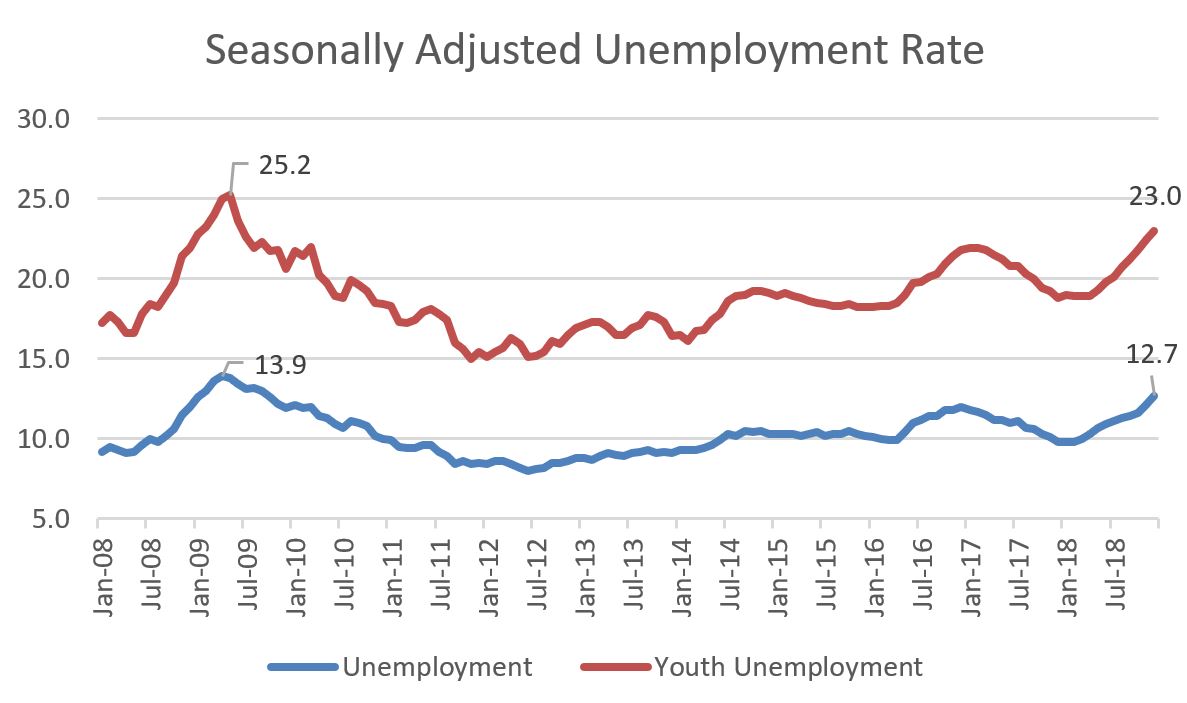 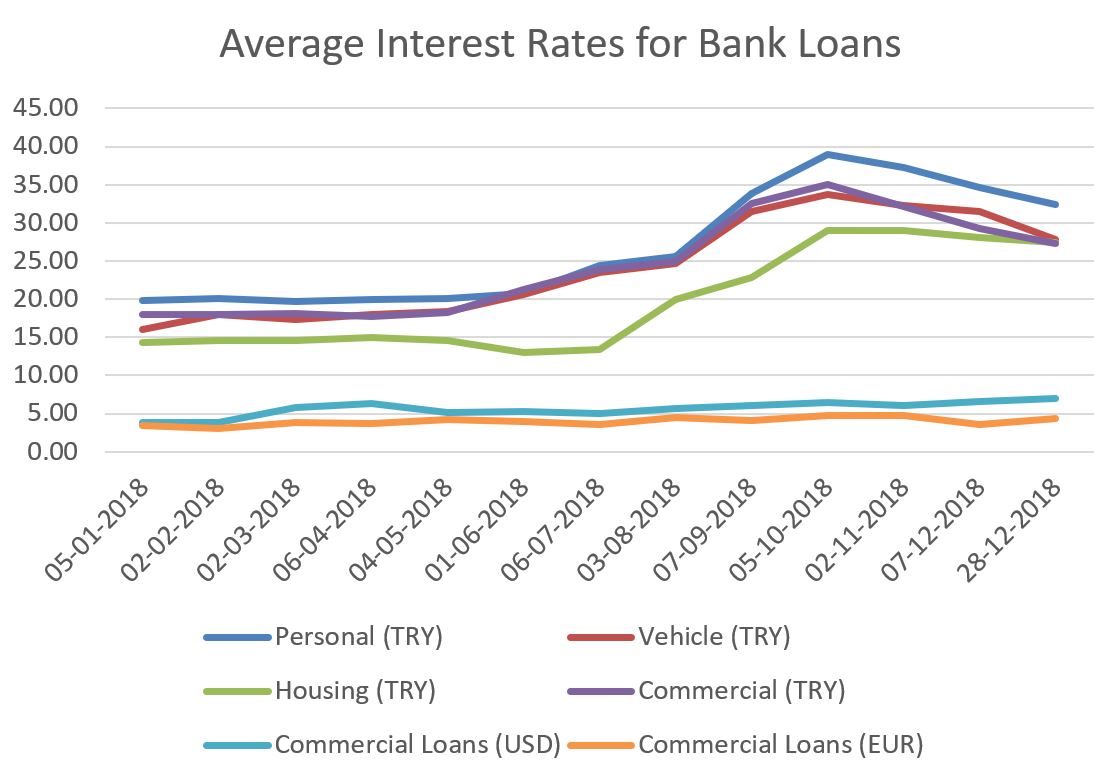 Data from the Banking Regulation and Supervision Agency (BDDK) shows that total banking sector loans amounted to $455 billion, $273.4 billion of which were in TRY and $181.5 billion in foreign currencies. Credit growth, which had seen a boost in 2017 with the help of the government credit guarantee scheme amounting to more than 260 billion TRY, slowed down in 2018 parallel to the higher interest rates and tighter liquidity conditions as well as prudence on the part of the banks. According to CBRT figures, interest rates for commercial loans in TRY increased from 18 percent to 27 percent between January–December 2018, while those for average consumer loans (including personal, vehicle, and housing loans) increased from 18.55 percent to 31.74 percent. Banking sector consumer loans and credit card debt totaled $95.8 billion as of December 2018—$35.7 billion of this was housing, $38 billion personal finance, and $19.9 billion consumer credit cards. According to BDDK data, non-performing consumer loan and credit card debt stood at $3.38 billion as of December 2018. Reported non-performing loans reached 4 percent, compared to 3 percent at the end of 2017 while 1549 firms reportedly filed for pre-bankruptcy known as “Konkordato” to seek temporary debt relief. 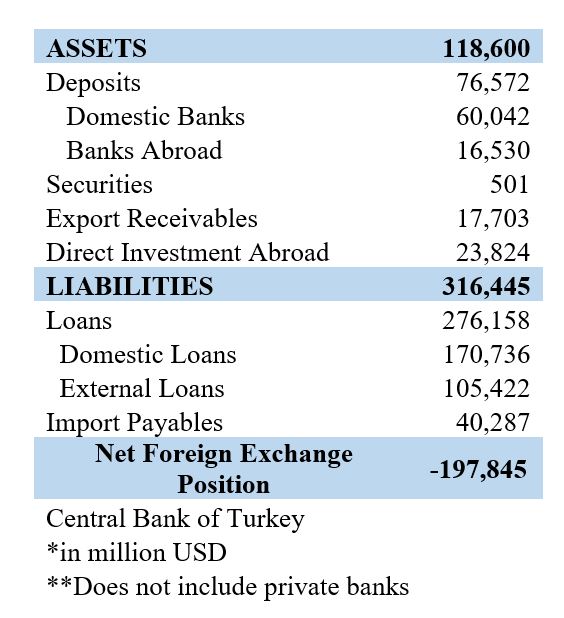 According to CBRT data, the private sector is highly exposed to foreign currency debt. The net foreign-exchange liabilities of Turkish nonfinancial companies reached $316 billion against $118 billion of assets as of December 2018, leaving both companies and banks vulnerable as the servicing of foreign currency debt became more difficult mainly because of the steep currency depreciation. According to a January 23 Bloomberg estimate, nine leading Turkish corporations including Yildiz, Otas, and Dogus, have either completed or sought almost $24 billion of loan restructurings in 2018.

Having predicted to Bloomberg on January 24, before the release of the final 2018 data that the “soft landing scenario is going according to plan,” Treasury and finance minister Berat Albayrak responded to confirmation of the unwelcome downward trend by tweeting on March 11 that “the worst expectations about growth did not occur . . . despite the most speculative attack and the global growth slowdown.” Referring to the August crisis, he commented on March 19 that the Turkish economy had demonstrated “a strong reflex” disappointing those who expected “a recession that would last two to three years.” He added, “Looking at the leading indicators, we see a much better performance in the first quarter of the year. We will not see [a contraction] lasting two quarters, let alone four . . . The first quarter growth in 2019 will be much higher, and from the second quarter onwards, we will carry our country to the potential growth period.”

President Recep Tayyip Erdogan, who is fully engaged in a vigorous local election campaign and aware of the growing economic concerns on the part of voters, also said on March 14 that 2019 would be “a year of takeoff and development.” For emphasis, he added, “Current 2019 data point to a mild recovery trend in the economy . . . Despite the increasing hardships in the global economy, the Turkish economy will have a positive picture after the second quarter.” Predicting that all would be well after the March 31 elections, he provided reassurance that “Starting in April, we will strengthen this process further with structural reforms and other steps, we have no problems there . . . We will continue to implement policies that will increase the prosperity of our nation.” On March 18, emphasizing that there would also be progress in the fight against high inflation and interest rates, Erdogan said, “They are not where I want them to be right now, but 2019 will the year in which we will see positive developments.”

Albayrak echoed Erdogan’s dissatisfaction with high interest rates and inflation the following day by saying, “Within the three months after October, interest rates began to fall to the 20s and even lower. Is that sufficient? How could it be? It was 4,5,6, in May 2013 . . . In the near future, we will bring interest rates and inflation to single-digits step by step . . . We will see single-digit inflation by September 2019 and the inflation rate for the year would be much better than the 15.9 percent that the government was expecting.” However, these statements from Erdogan and Albayrak undercut their previous reassurances relating to the independence of the CBRT. On September 13, 2018, even while he was renewing his criticism of the steps that the CBRT was taking, Erdogan said, “CBRT is independent and makes its own decisions.” For his part, on September 3, 2018, Albayrak said, “The central bank in Turkey has been maybe more independent than those in other countries.” It is worth noting that the most recent CBRT statement on March 6 promised to maintain “tight monetary policy stance until the inflation outlook displays a significant improvement” and to “deliver further monetary tightening if needed.”

In sharp contrast to the government’s own optimistic outlook, S&P commented on February 15 that its response to current difficulties had been “largely ad hoc, focused more on relieving symptoms rather than on resolving the fundamental economic vulnerabilities” and that there would be a period of “stagflationary adjustment” during which the country would contract again in 2019. The former treasury undersecretary Mahfi Egilmez went even further by claiming on March 11 that Turkey had in fact entered a period of “slumpflation” marked by high inflation and economic decline that would prove difficult to overcome.

In the best-case scenario, the government could be proven right with the country gliding into a “soft landing” during 2019. However, it is also possible that Turkey could experience a prolonged downturn lasting longer than the 2008–2009 crisis. If that were to happen, it would be difficult for the economy to bounce back as quickly as in the past with a V-shaped recovery due to less favorable global financial conditions and a heavier private sector debt burden and could slip into an L-shaped recessionary phase.

Zeynep Yekeler is a research assistant with the Turkey Project at the Center for Strategic and International Studies in Washington, D.C. Bulent Aliriza is a senior associate and director of the CSIS Turkey Project.