The Turkish Elections: A Major Reversal for Erdogan

The June 7 parliamentary elections in Turkey delivered a genuine surprise with massive implications for the country’s political future. Having dominated Turkish politics for over twelve years through three successive victories in 2002, 2007 and 2011, the Justice and Development Party (AKP) failed to retain its majority in the Turkish Grand National Assembly (TGNA). 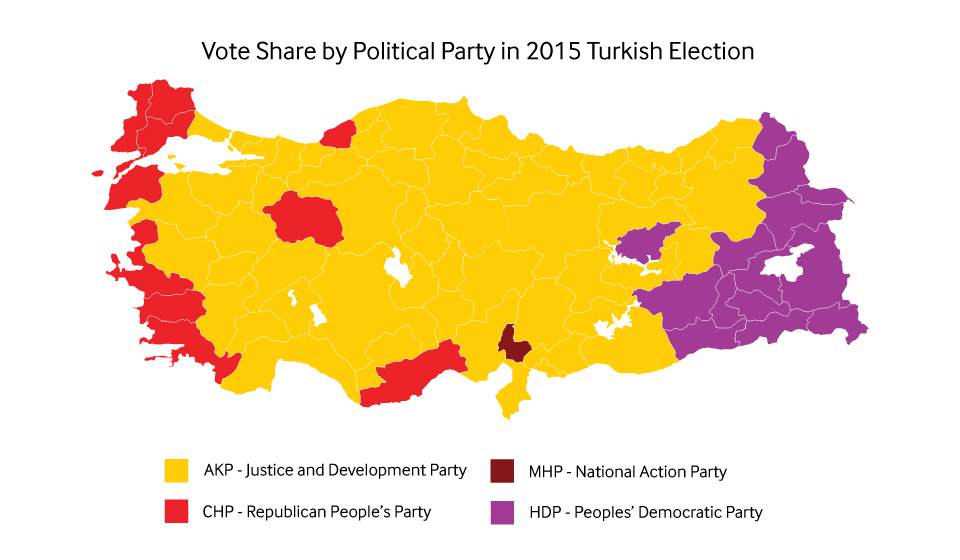 While it still received many more votes than its opponents and will have the largest bloc in the TGNA, the AKP performance is undoubtedly a failure by its previously very high standards. Subject to official confirmation, the AKP vote went down from almost 50 percent in 2011 to just below 41 percent and its share of the 550 seats in the TGNA fell from 327 to 258, below the 276 required for a majority. The Republican People’s Party (CHP) received around 25 percent and 132 seats; the National Action Party (MHP) around 16 percent and 80 seats and the predominantly Kurdish Peoples’ Democratic Party (HDP) around 13 percent and 80 seats.

Although it lost votes to the MHP and some of its supporters stayed away from the polls, the AKP’s inability to retain its majority can be directly attributed to the HDP’s success in exceeding the 10 percent national barrier for parliamentary representation. If the HDP had failed to do so, almost all of the seats it won would then have gone to the AKP and thus insured it a very comfortable majority in the TGNA. A combination of the AKP’s late change of policy on the Kurdish peace process, support from non-Kurds beyond the southeast –especially tactical voters switching from the CHP– and a virtuoso performance by its leader Selahattin Demirtas all contributed to ensuring the unexpectedly high share of the vote for the HDP.

The result is obviously a major disappointment for President Recep Tayyip Erdogan who effectively transformed the election into a referendum on himself. Having continued to run the country from the presidential palace through his unchallenged influence over the AKP government since his elevation to the presidency in August 2014, Erdogan was hoping that the election would produce a sufficiently big AKP victory to facilitate a formal switch from the current parliamentary to a presidential system. To that end, he introduced himself directly into the electoral fight, notwithstanding his constitutional oath to be independent, overshadowing in the process the official campaign of Ahmet Davutoglu, his successor as AKP leader and prime minister. There is little doubt that the resulting bifurcation caused confusion and undercut the effectiveness of the AKP message to voters while allowing the opposition to coalesce around a single goal of blocking Erdogan’s ambitions.

If Erdogan had not chosen to run for the presidency last year, he might now have been celebrating a fourth successive electoral victory for himself and his party. Instead, he has to deal with a new and unfavorable political environment which is not only unconducive to the expansion he has been seeking of the constitutional powers of the president but also to his ability to continue to exercise extensive executive powers on a de facto basis. While it remains to be seen whether the AKP goes into a coalition–an arrangement it denounced as bad for Turkey throughout the campaign–with one of the three other parties, despite the bitterness of its campaign against them, soldiers on as a minority government before trying to force early elections or assumes the unaccustomed role of opposition, what is clear is that the era of its unchallenged supremacy under Erdogan is over.

Bulent Aliriza is director of the Turkey Project at the Center for Strategic and International Studies (CSIS) in Washington D.C.

© 2015 by the Center for Strategic and International Studies. All rights reserved