The UN Vote on Aid in Syria

Critical Questions by Natasha Hall and Will Todman

On July 9, 2021, the UN Security Council unanimously passed Resolution 2585, allowing UN agencies to continue to coordinate and deliver aid cross-border from Turkey to northwestern Syria without Syrian government consent. Russia had threatened to veto a renewal of the cross-border mandate, but it agreed to a compromise the day before the mandate was set to expire on July 10. 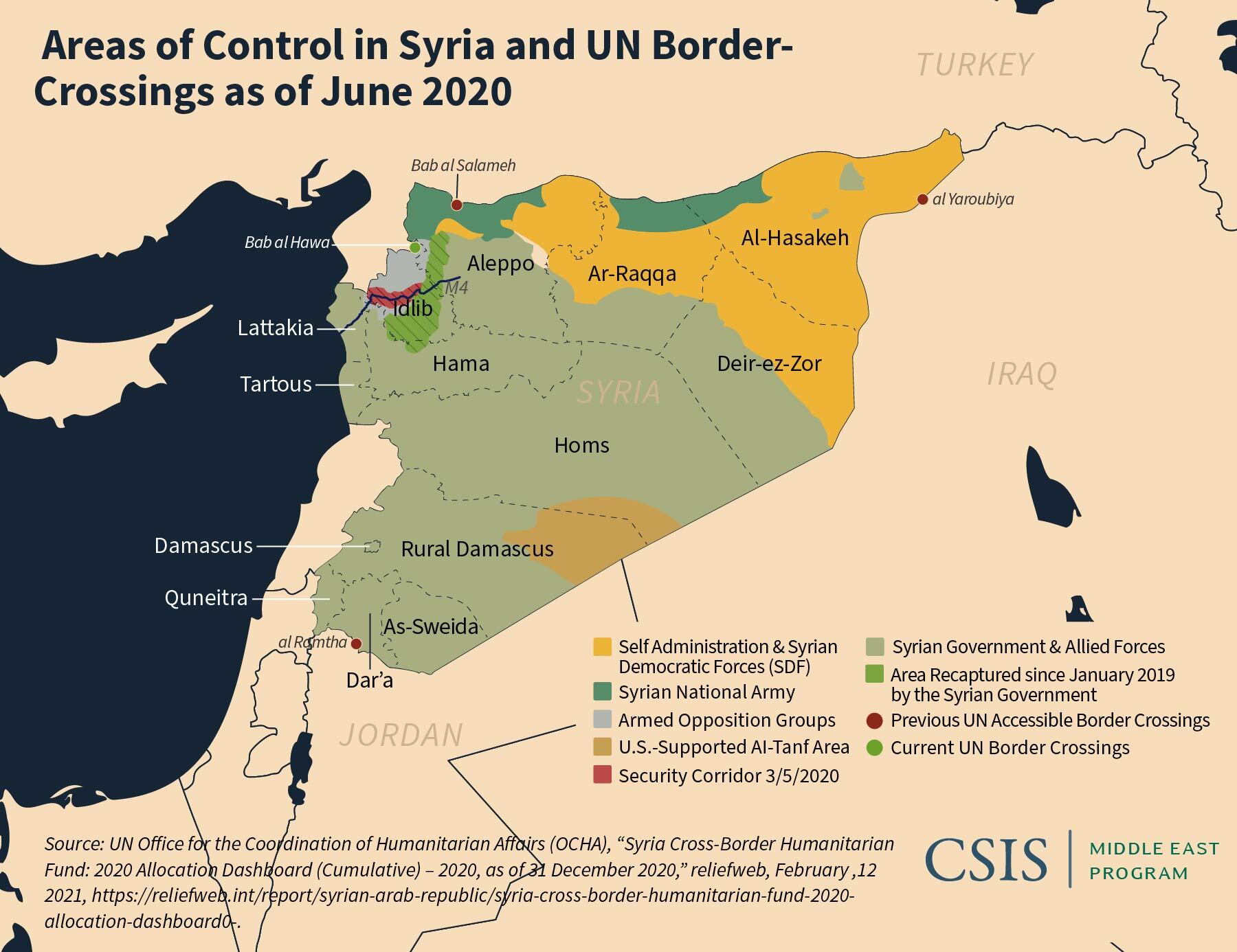 Q1: What does this vote mean?

A1: The new resolution allows UN agencies to use the Bab al-Hawa crossing for six months and authorizes an additional six-month extension of the mandate after the UN secretary-general issues a “substantive report” that focuses on “transparency in operations, and progress on cross-line access in meeting humanitarian needs” to northwestern Syria from Damascus.

It is not clear from the wording of these provisions whether Russia will be able to block the extension based on the contents of the report, if the secretary-general does not deliver it in time, or if there is no progress on crossline operations. Regardless, diplomats believe Russia will seek to end the UN cross-border mechanism for good when it comes up for reauthorization next July.

With just six months of guaranteed access, aid agencies will be unable to conduct long-term aid planning, undermining the efficiency and cost-effectiveness of operations. Time spent contingency planning will reduce humanitarians’ ability to focus on the actual needs. Because the resolution requires progress on crossline aid operations from Damascus, aid workers will also have to devote time and resources to an aid modality that has previously proven ineffective. This comes at a time when needs are rising and international funding for the response is decreasing.

Q2: What is significant about the wording of the resolution?

A2: UN Security Council Resolution 2585 introduces some significant new terminology, which could have broader implications for the conflict. The resolution expresses explicit support for “early recovery” activities in Syria for the first time, an ambiguous term which overlaps with reconstruction. Western donors have previously made reconstruction support contingent on progress on the political transition outlined in Resolution 2254. This phrasing suggests tacit U.S. support for allowing reconstruction-like aid absent political concessions from the Assad regime. Importantly, this acknowledgement comes at a time when political conditions for Syrians who do not support Assad are worsening: the regime is besieging Daraa, crossline aid to the northeast remains inadequate and uncoordinated, and arbitrary arrests continue in government-held areas.

The resolution also explicitly calls for improving crossline aid operations from Damascus. As it has done before, the regime could delay or hinder crossline aid when it is politically or militarily advantageous. Supporting crossline operations also serves the regime’s economic interests, as goods would be procured in government-held Syria and the Assad government could take a larger cut of international funding.

Q3: What concessions did the U.S. government make?

A3: The United States made a lot of concessions. In March 2021, Secretary Antony Blinken called for UN agencies to have use of three border crossings, reopening two that were shut down in the previous resolution.

While the United States resisted Chinese efforts to insert language on sanctions into the resolution or lift sanctions as part of a trade-off, it acquiesced to other Russian demands. Beyond accepting a single crossing, the United States agreed to language calling for an expansion of crossline aid operations from Damascus to northwestern Syria. The resolution’s language paves the way for a future that is consistent with Russian plans but starkly contrasts the positions Secretary Blinken laid out previously.

In the lead up to the negotiations, the Biden administration sought to temper tensions with Russia—lifting sanctions rather than announcing new designations under the Caesar Civilian Protection Act and announcing $436 million in additional assistance for Syrians in need, some of which will go to government-held areas.

A4: Russia is the biggest winner. It blunted efforts to open new crossings, got an opportunity to relitigate the issue in January, and won the approval of language that advances its strategic objectives.

Critically, Russia has also preserved its ability to hold humanitarian access in Syria hostage in exchange for concessions, ensuring it continues to hold the strongest hand in future negotiations. There is reason to believe that it was never in Russia’s interests to block the resolution’s renewal. Beyond the optics of bringing about one of the worst humanitarian crises in the world, a Russian veto could have undermined its sensitive relationship with Turkey. It also would have lost its chance to extract concessions from Western donor states in future renewal negotiations.

The United States is articulating the outcome of the vote as a win. President Biden himself raised the issue with President Putin in Geneva, Secretary Blinken addressed the issue in the Security Council and in his meeting with Minister Lavrov, and Ambassador Thomas-Greenfield visited the Bab al-Hawa border crossing in June. The United States can say that it averted a major humanitarian catastrophe in the northwest and resisted Russian and Chinese efforts to insert language about sanctions into the resolution.

President Biden made the renewal of the cross-border mechanism a precondition to exploring coordination with Russia on other issues relating to Syria. Russia can now argue that it has demonstrated its willingness to compromise and pursue further cooperation with the United States on Syria. The vote should therefore be seen as a confidence-building measure between the two powers, but it is difficult to envision serious U.S.-Russian cooperation on Syria.

The Biden administration made a renewal of the cross-border mandate a major priority, but it did not come prepared with the “sticks” needed to achieve its stated desired outcome. The outcome does not change the overall uncertainty for unfettered aid access at a time when needs are at their highest. The vote further entrenches the worrying precedent that life-saving humanitarian assistance is something that the world’s great powers bargain over in the Security Council.

Q5: Why is cross-border assistance to Syria important anyway?

A5: UN agencies provide lifesaving aid to 4 million civilians living in northwestern Syria—two-thirds of whom were forcibly displaced from other parts of the country. Should that aid end, living conditions in that part of Syria would plummet, countless people would die, and a refugee crisis would likely ensue, enveloping not only Turkey but much of Europe. Many humanitarian organizations also fear that extremist groups could take advantage of the turmoil.

The Security Council created the cross-border mechanism in 2014 when it became clear that the Assad regime was neither willing nor able to provide humanitarian support to large segments of its population. The withdrawal of UN-administered support would spur a catastrophe.