The Uncertain Trends and Metrics of Terrorism in 2016

Report by Anthony H. Cordesman and Maxwell B. Markusen

By Anthony H. Cordesman with the assistance of Max Markusen

The global trends in terrorism present some of the most complex problems for analysis in U.S. national security. The Burke Chair at CSIS has updated a survey of such trends that highlights a wide range of developments since 1970, as well as more recent trends in 2015 and 2016. This analysis is entitled The Uncertain Trends in Terrorism and is available on the CSIS web site at http://csis-website-prod.s3.amazonaws.com/s3fs-public/publication/161129_Trends_Metrics_Terrorism_Updated.pdf. The analysis includes both broad trends as presented in the U.S. State Department Country Reports on Terrorism and START data base, and key trend metrics from other sources and NGOs.

The report’s Table of Contents include: 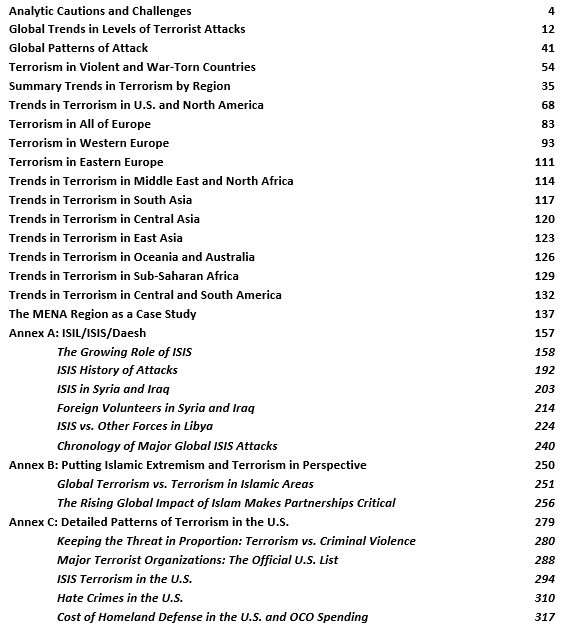 The analysis provides a wide range of different metrics for measuring the patterns in global and regional terrorism, the impact of Islamic extremism, and how terrorism varies by region.

Drawing on the START Data Base

The analysis draws heavily on the START data base maintained by the University of Maryland and used by the State Department in its annual country reports on terrorism (https://www.start.umd.edu/gtd/). The START database is now the closest thing available to an official U.S. data base, and is the primary source of most U.S. media, research center, and academic estimates.

It also draws heavily on the work of the Institute for Economics and Peace (IEP) and its Global Terrorism Index 2016 (http://economicsandpeace.org/wp-content/uploads/2015/11/Global-Terrorism-Index-2015.pdf). The IEP also makes source use of START, but is a key source of independent estimates and narrative analyses, and makes independent assessments of the impact of terrorism and its economics.

Many of the broad trends presented in this study seem generally valid, and comparative views are presented where major differences exist between sources. However, no analysis can overcome the fact that all current unclassified estimates of terrorism suffer badly from the fact that the National Counterterrorism Center (NCTC) has lacked the leadership and focus to maintain its declassified data base on terrorism, and now provides no meaningful official transparency on the patterns in terrorism.

The START data base gets its source data from media reporting and has major gaps and uncertainties clearly recognized in the description of the database and its supporting analyses. It is particularly weak in the areas where governments fail to allow accurate reporting on terrorism in their media. Useful as the START data base and other independent analyses are, relying on public reporting leaves major problems and gaps in the data available.

The fact that the NCTC no longer reports numbers or patterns on an unclassified basis means there now is no official unclassified U.S. data reporting on the trends in terrorism. This lack of transparency means there is no source of that allows comparisons of official estimates with NGO and media sources, and no way to analyze the effectiveness of counterterrorism based on official estimates of its effects.

Only reporting that can draw on the releasable portions of the broader data bases within the U.S. government can provide the depth and accuracy of coverage needed to provide an accurate picture of all the key trends in terrorism and extremism and assess the effectiveness of official efforts. The NCTC’s decision to stop providing such data makes such analysis impossible.

Broader Problems in the Data and Reporting

Moreover, cataloguing the trends, methods of analysis, and data from the wide range of sources used in in this survey has revealed a much wider range of problems. It is clear there may be critical problems in the ways the U.S. government, other governments, and NGOs approach terrorism and counterterrorism: