The Uncertain Trends in the “Wars” on Terrorism

Challenges of State Terrorism, Insurgency and Other Key Problems

Seventeen years after the start of the first major U.S. war on terrorism – and tens of thousands of casualties and more than two trillion dollars later – the U.S. still lacks a credible database on international terrorism. There is no common official database at the interagency level, there are deep disagreements over the size and success of given threats, and there are major gaps in coverage. Each “war” on terrorism has its own approach (and usually approaches) to estimating the threat and to judging what parameters are important.

There are a wide range of databases outside the U.S. government, ranging from commercial efforts to academic and NGO assessments. They often sharply disagree, and many are clearly political or ideological in character. The closest thing to an official database is the one used by the U.S. State Department in its Country Reports on Terrorism and its Annex of Statistical Information. The report and annex provide an overview of the global trends in terrorism. This database was originally developed by RAND, and was then maintained by the National Counter Terrorism Center (NCTC).

This database is now maintained by the National Consortium for the Study of Terrorism and Responses to Terrorism (START). The U.S. Department of State contracted START in June 2012 to collect a Statistical Annex dataset and provide a report to include in the State Department’s annual Country Reports on Terrorism.

The database has many limitations that are laid out in detail by START. Limitations include a dependence on media reporting – rather than on intelligence and official reporting – and a lack of any official support, review, or vetting by intelligence personnel and other experts. START is not charged with publicly examining the range of other databases and their comparative strengths and weaknesses, nor are they charged with explicitly assessing and reporting the problems in collecting and analyzing given sets of data.

Less clear, however, is that START issues summary data that does not explicitly state the level of uncertainty chosen, and – as this analysis shows – it seems to use different sets of indicators for different countries and regions. This seems particularly true of its coverage of military targets. In an era of sectarian and ethnic conflict, it does not clearly identify perpetrators or targets by sect, ethnicity, or tribe. Key trends are often summarized without an explanation of the cause or motive.

This does not prevent the State Department Country Reports on Terrorism and its Annex of Statistical Information from having great value in portraying the broader trends in terrorism, but the reader should be aware of these limits, as well as the fact that other official, academic/think tank, and commercial estimates of terrorism can provide very different trends.

The Burke chair at CSIS has prepared a graphic analysis of the latest version of the report, which was issued in August 2018. It is entitled, The Uncertain Trends in the “Wars” on Terrorism : Challenges of State Terrorism, Insurgency and Other Key Problems. It is available on the CSIS web site at https://csis-website-prod.s3.amazonaws.com/s3fs-public/publication/180926_Report_Trends_Terrorism.pdf?6SdwxkHP5Ks28BtKVjb33VoVb7kwCHwT. It highlights the key trends presented in the data in the report, but it also discusses several key limitations that raise serious questions about the way the U.S. is approaching the very nature of terrorism and its wars against extremism.

The first – and most serious – reason to question how well the Annex and its data characterize the broader threat from terrorism comes from the way in which terrorism is defined. It only includes "violent acts carried out by non-state actors." The main report does include "State Sponsors of Terrorism," but only describes the ways given nations sponsor non-state actors. Neither the main report nor the Annex of Statistical Information address the fact that states commit direct acts of terrorism, or the extent to which non-state actors are reacting to such terrorism.

There is no "good" definition of terrorism in the sense that it can meet the different expectations, values, and goals of those who seek to define it. In broad terms, the criteria used by the State Department and START form as good a definition as any for terrorism committed by non-state actors that do not hold or control significant amounts of territory. The criteria, however, does not apply to non-state actors that become strong enough to pose a serious insurgent threat, and/or control or influence a large amount of territory or the population .

This is critical gap at a time when many terrorist movements have come to pose a serious threat in terms of occupying or controlling territory (Afghanistan, Iraq, Syria), can threaten the existence of governments (Sub-Saharan Africa), or create or exploit a situation where there is no effective national government (Libya, Yemen).

The U.S. is now fighting movements like ISIS, Al Qaida, and the Taliban with mixed success, as well as supporting a long list of countries in fights with their affiliates or other movements. In many cases, the threat has escalated from isolated or sporadic acts of terrorism to active insurgency or ongoing patterns of attacks that use terrorism and other forms of violence to systematically undermine a given government.

The graphic analyses for the wars in Iraq, Syria, Afghan, and Yemen also highlight another problem. The database now only covers the impact of terrorism in terms of deaths, injuries, and kidnappings/hostage taking. It does not tie terrorism and extremism to the creation of millions of refugees and internally displaced persons, enduring sectarian and ethnic violence, impact on minorities, fights for the control of space and populations, and the massive costs in economic, social, and infrastructure terms. One has only to look at the UN OCHA graphics for each war – or review the World Bank and other reporting on terrorism’s impact on governance and economic development – to realize that short-term impacts in terms of deaths, injuries, and kidnappings/hostage taking may well be a fraction of the ­­­­­­human cost of terrorism and extremism.

The importance of these issues, the scale of the uncertainties and contradictions in the report and the database, and the need to better resource and support the START effort are discussed in depth in the CSIS report, along with suggested improvements in the reporting for future years. 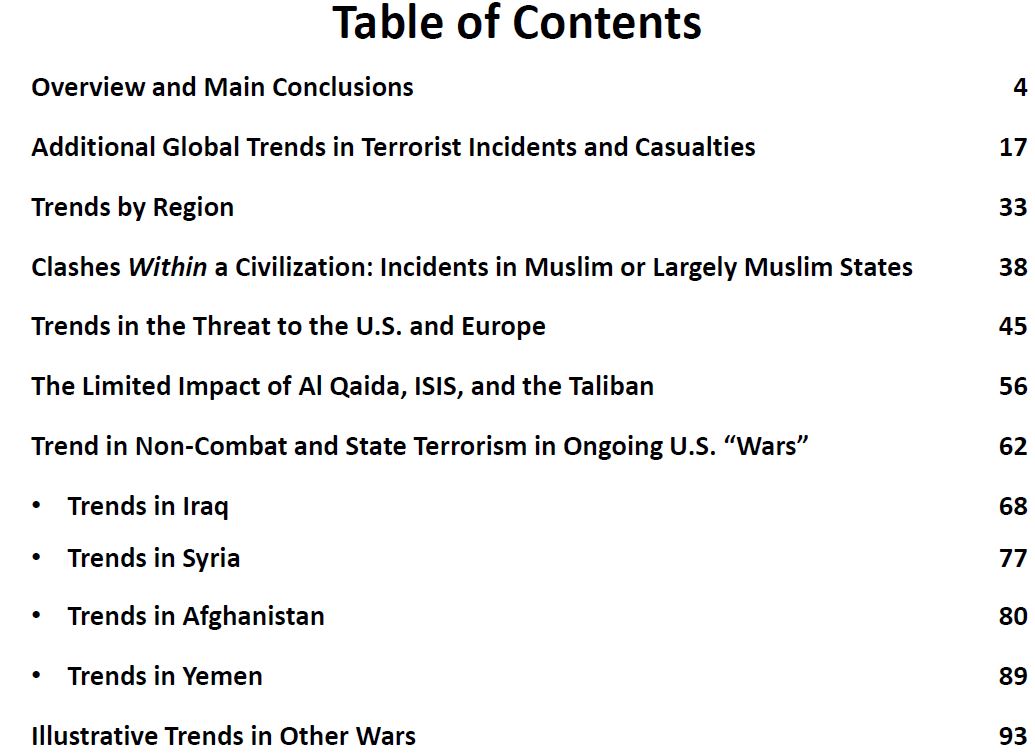