On August 2, Deputy Secretary of Defense David Norquist issued a memo calling for a “comprehensive zero-based review of all defense-wide (DW) functions and activities” in the Department of Defense (DoD). The goal of this ongoing effort, led by the deputy secretary, is to ensure the alignment of resources with the National Defense Strategy (NDS) through the FY 2021 program review cycle and to “support a longer-term focus on structural reform” that generates future savings. In line with Norquist’s call to “begin immediately and move forward aggressively,” the review kicked off on Saturday, August 10, only eight days after the memo was issued. This brief explains what the review entails, which defense-wide organizations are subject to it, and previous efforts at driving efficiencies in the “Fourth Estate.”

Which organizations are included in the review?

According to Deputy Norquist’s memo, all defense-wide organizations, funds, and accounts are subject to the zero-based review. “Defense-wide” refers to DoD organizations outside of the military departments—what is also known collectively as the “ Fourth Estate.” These organizations include the Office of the Secretary of Defense (OSD), the Joint Staff, the Combatant Commands, the defense agencies, and DoD field activities. DoD’s 19 defense agencies and 8 field activities are responsible for “consolidated supply and service functions on a department-wide basis” and together account for approximately 380,000 employees, according to a 2018 GAO report. Notable defense-wide agencies include the Defense Advanced Research Projects Agency (DARPA), the Missile Defense Agency (MDA), and the Defense Intelligence Agency (DIA), among others. The Defense Threat Reduction Agency (DTRA) was the subject of the first of the weekly review meetings on August 10. At a press conference on August 28, Secretary of Defense Mark Esper stated that while the review has begun with a focus on the Fourth Estate, it “will eventually address other parts of the Department of Defense enterprise.”

What is a zero-based budgeting review?

Deputy Norquist’s memo refers to the review as a “zero-based budgeting review.” Standard budgeting practices typically adjust planned expenditures and funding allocations for upcoming years incrementally based on the amount spent in the preceding year. However, under a zero-based budgeting process, organizations must justify all future expenditures for both new and ongoing activities in a systematic evaluation. According to Peter Pyhrr, who is credited with popularizing the approach, zero-based budgeting centers on two questions: “(1) are the current activities efficient and effective; and (2) should current activities be eliminated or reduced to fund higher-priority new programs or to reduce the current budget?” Pyhrr disputes the interpretation of this method as “the process of throwing everything out and starting all over again from scratch” as the name suggests, instead offering a more practical definition as “the evaluation of all programs.”

As a model for government spending, President Jimmy Carter instituted zero-based budgeting during his tenure as governor of Georgia and installed the process in the federal government as part of his 1976 campaign promise to balance the federal budget by 1981. However, critics contended that the system yielded few results and “required excessive expenditures of time and effort,” and it would later be abandoned under President Ronald Reagan.

Norquist’s description of this zero-based and “comprehensive” review suggests it will follow the model of the Army’s “Night Court” process, overseen by then-Army Secretary Mark Esper and then-Chief of Staff (soon to be Chairman of the Joint Chiefs of Staff) Mark Milley. A top-down review of Army programs, “Night Court” targeted savings from legacy weapon systems to reinvest in modernization priorities, such as long-range precision fires and future vertical lift. Ultimately, close to 200 programs were eliminated, reduced, or consolidated, and $25 billion was cut from investments in legacy systems over the five years covered by the FY 2020 Future Years Defense Program (FYDP), according to documents obtained by Inside Defense. Approximately $4 billion in savings was generated from acquisition program eliminations, while reductions and delays in acquisition programs accounted for another $11 billion. As illustrated in Figures 1 and 2, individual program savings from these adjustments ranged from nearly $1.1 billion on the higher end to $19,000 on the lower end. Of the approximate total $15 billion in savings from the program eliminations, reductions, and delays, 78 percent resulted from individual adjustments over $100 million. 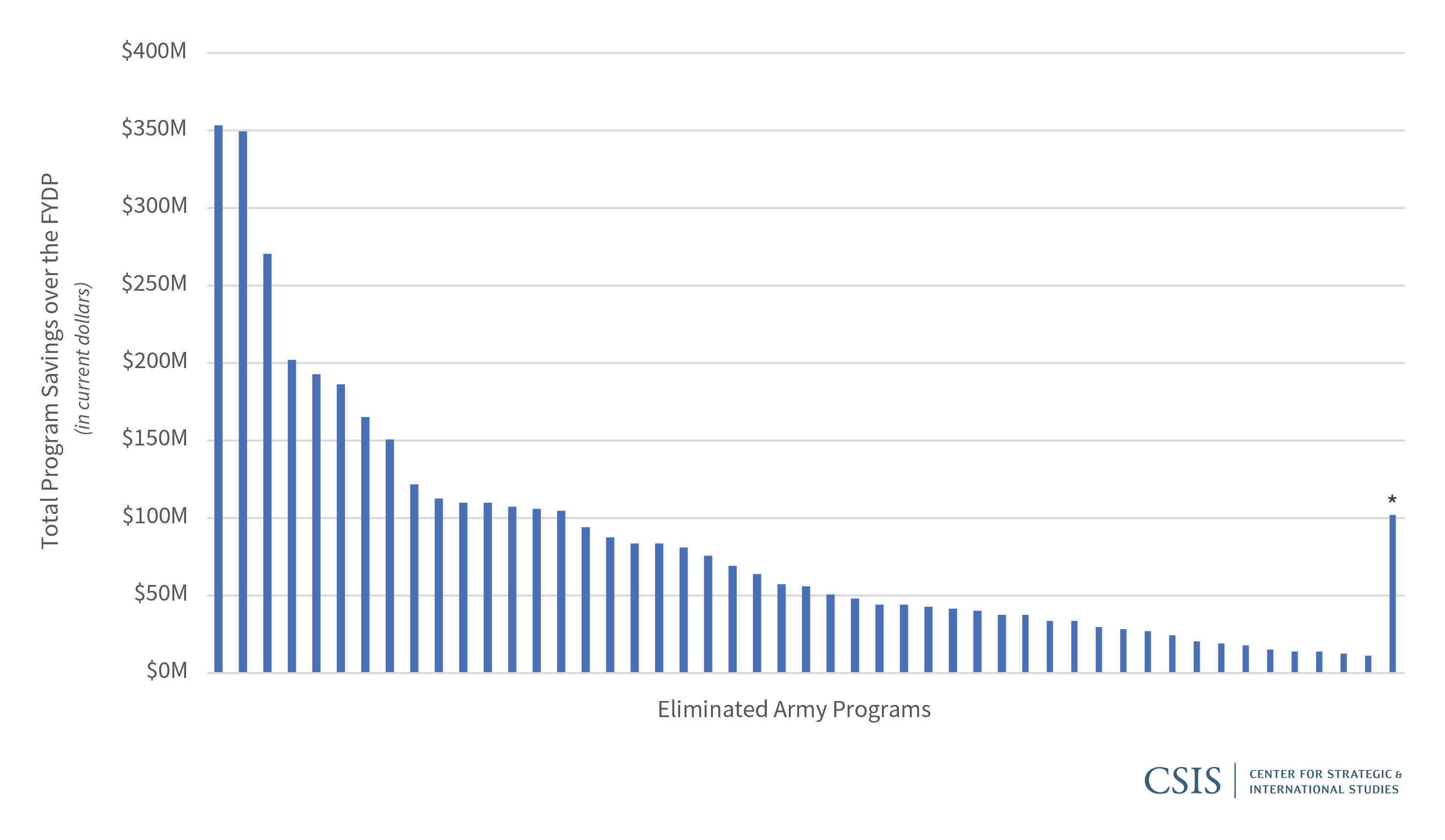 *Total of 23 program eliminations of $10 million or less.
Source: Compiled from U.S. Army data obtained by Inside Defense. 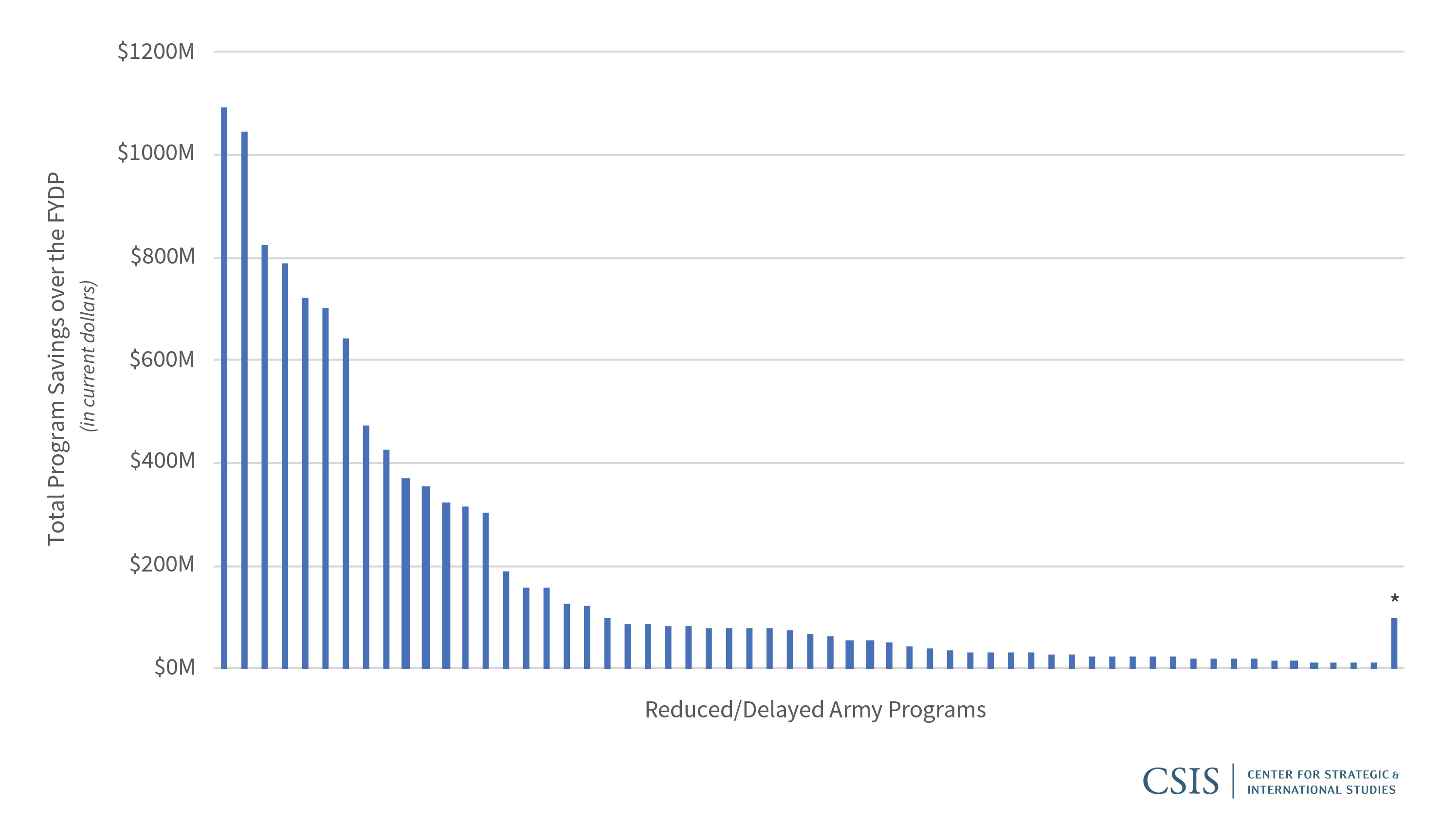 *Total of 24 program reductions/delays of $10 million or less.
Source: Compiled from U.S. Army data obtained by Inside Defense.

How much of the defense budget goes to the “Fourth Estate?”

The immediate goal of the review, according to the deputy secretary’s memo, is to identify funding in defense-wide accounts to be reallocated for the FY 2021 budget request and, to a lesser extent, FY 2020. But how much funding falls under those accounts? In the administration’s FY 2020 budget request, defense-wide accounts were slated to receive $117 billion, just over 16 percent of DoD’s total discretionary budget request of $718 billion (including Overseas Contingency Operations (OCO) and emergency funding). As shown in Figure 3, defense-wide funding has gradually accounted for a greater share of the overall DoD budget (including both discretionary and mandatory funding) over time, growing from a low of 5 percent in FY 1985 to a peak of 20 percent in FY 2017.

Source: Compiled from Office of the Under Secretary of Defense (Comptroller), National Defense Budget Estimates for FY 2020 (Washington, DC: May 2019), https://comptroller.defense.gov/Portals/45/Documents/defbudget/fy2020/FY20_Green_Book.pdf.

Within defense-wide accounts, operation and maintenance (O&M) funding takes up the vast majority of funding at 70 percent in the FY 2020 request, followed by research, development, test, and evaluation at 22 percent. The defense-wide request for FY 2020 includes $10 billion in OCO funding. 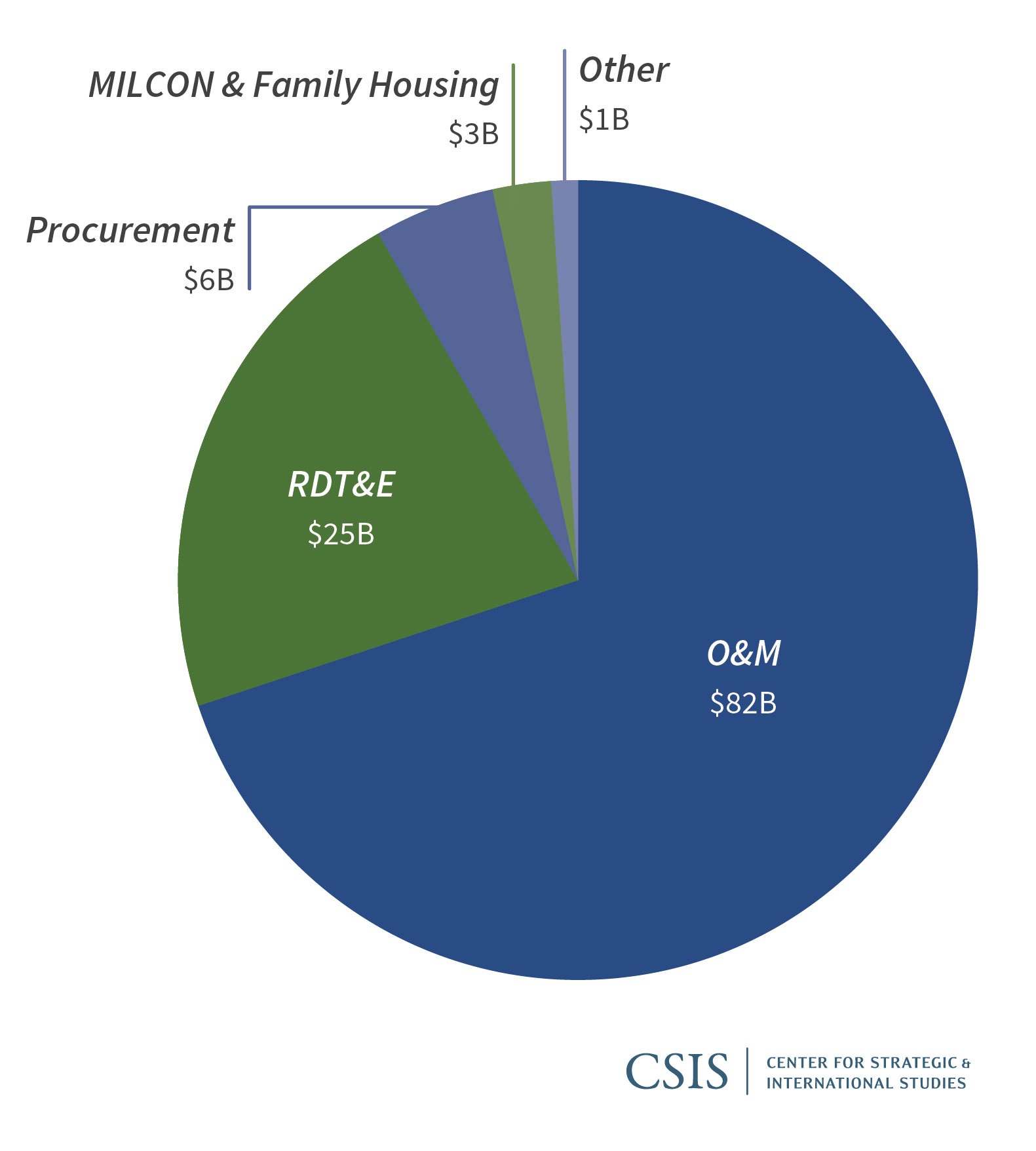 Source: Compiled from Office of the Under Secretary of Defense (Comptroller), National Defense Budget Estimates for FY 2020 (Washington, DC: May 2019), https://comptroller.defense.gov/Portals/45/Documents/defbudget/fy2020/FY20_Green_Book.pdf.

However, easy savings should not be expected from this review. Unlike the “Night Court” process, which targeted FY 2020 Army acquisition program funding for the majority of its adjustments, savings in the Fourth Estate would have to be generated largely through structural and process reforms. Such reforms would be unlikely to yield significant savings immediately, and reductions to some organizations’ budgets would still require time and political capital. For example, health care for servicemembers is administered by the Defense Health Agency (DHA), which—as shown in Figure 5—accounts for more than $30 billion of the Fourth Estate’s total funding. Similarly, Special Operations Command (SOCOM), with roughly $14 billion in funding, and MDA’s approximate $10 billion budget are both unlikely to see notable reductions. Savings from the defense-wide review should thus be expected to come on the margins rather than from wholesale cuts to the Fourth Estate. 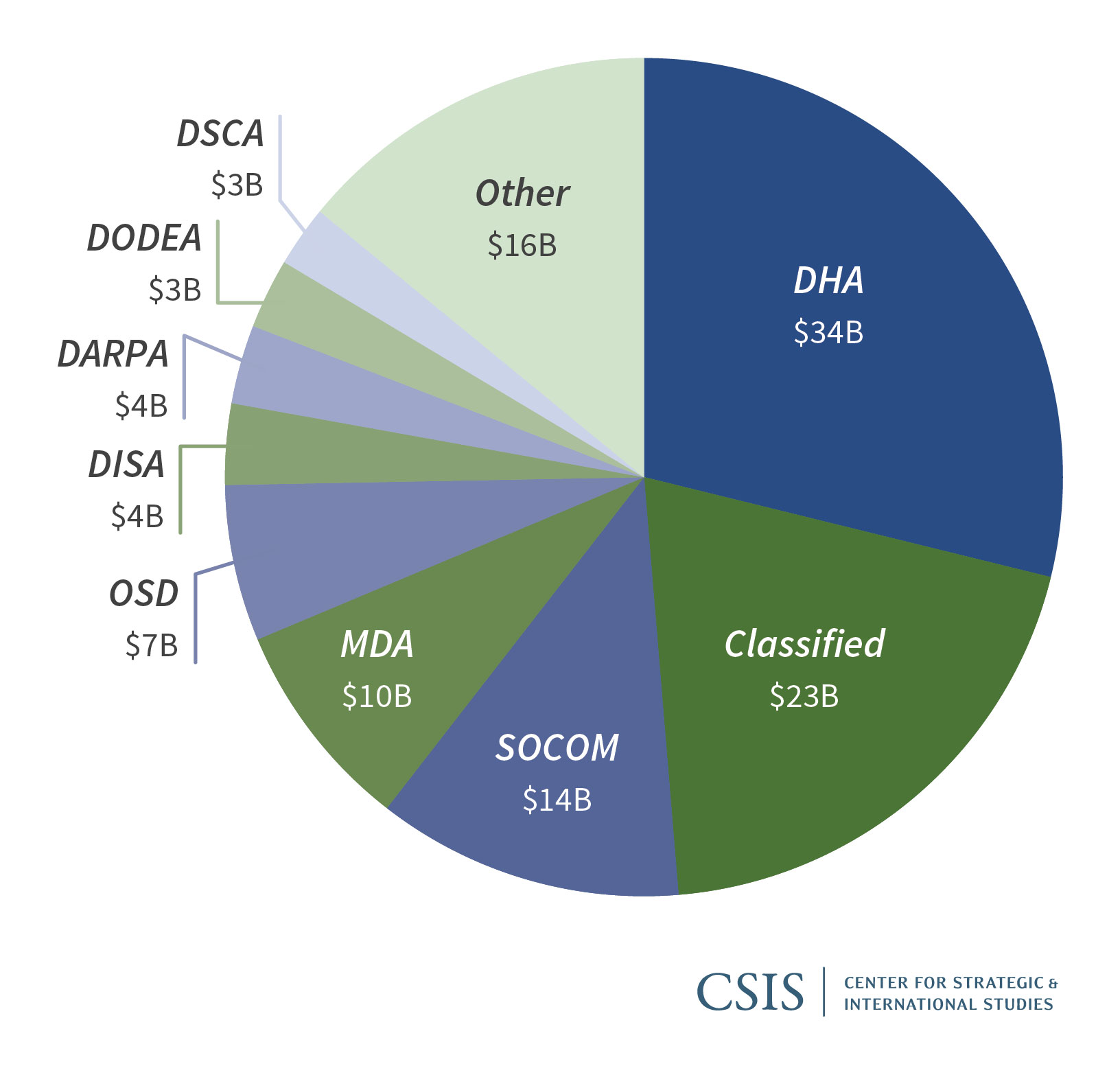 Which previous reforms have targeted the “Fourth Estate”?

The Fourth Estate has long faced criticism from detractors both in Congress and within DoD for inefficiencies, redundancies, and waste. The aforementioned 2018 GAO report, for example, found instances of bureaucratic overlap and fragmentation among defense agencies and field activities. Notably, the report highlighted six separate organizations in DoD that provide human resources services to other defense agencies and organizations.

However, as the American Enterprise Institute’s Mackenzie Eaglen has previously written, the Fourth Estate is “a frequent scapegoat for the malaise permeating the Pentagon” due to its “disaggregation, and subsequent lack of accountability or transparency.” In part, Eaglen attributes this to the Fourth Estate’s lack of uniformed warfighters and leaders, a high turnover rate among its appointed civilian leadership, and the “mundane” responsibilities of most of its agencies. Consequently, the Fourth Estate has few defenders in the face of many vocal critics, who have tried time and time again to cut its funding and reduce its size.

Most recently, in the leadup to the 2019 National Defense Authorization Act (NDAA), then-House Armed Services Chairman Mac Thornberry proposed significant reforms to defense-wide organizations. These included the elimination of seven agencies and a requirement to reduce the budget for certain defense-wide functions by 25 percent . The DoD chief management officer, whose position was created in the 2017 NDAA, would have been empowered to enforce these cuts.

Ultimately, Thornberry’s reforms were watered down in his committee’s final markup of the bill, just as previous attempts to reign in the Fourth Estate have floundered. Why has this Holy Grail of savings eluded the grasp of so many confident reformers? In part, it’s because those reformers expect just that: an easy solution that will generate billions of dollars in savings to be reinvested elsewhere. Consequently, many proposed reforms project unrealistic and audacious savings or lack the specificity to say where those savings will come from. A 2015 study by McKinsey & Company for the Defense Business Board generated headlines that the Pentagon was hiding $125 billion in “bureaucratic waste,” yet the report’s plan to save $25 billion annually over five years failed to identify any specific savings . Realistic, successful reforms require groundwork upfront, according to CSIS scholar Mark Cancian, as well as reliable estimates for potential savings, an area DoD is lacking in according to GAO.

However, the primary challenge in generating significant savings from the Fourth Estate is that the military services rely on those defense-wide organizations for the “mundane” responsibilities they perform. If those agencies were eliminated, the support and logistical functions they provide to the warfighter would still have to be done and funded elsewhere within the Department. Barring drastic efforts to reorganize DoD, savings in the Fourth Estate will be found in the margins by rooting out inefficiencies and duplicative responsibilities.

What can we expect from the defense-wide review?

While expectations are high for this review, especially given the positive performance of the Army’s “Night Court” process under Esper, they must also be measured, given the numerous attempts at defense-wide reform in the past. Norquist’s leadership of the review and Esper’s involvement in it signals that this will not be another passive effort at reform and that the Department is serious about generating savings in the Fourth Estate. However, the secretary and his deputy have chosen a popular first target for cuts and adjustments rather than expend the political capital to generate potentially greater savings from a round of Base Realignment and Closure (BRAC) or cuts to unnecessary force structure and legacy weapons programs. With the 2020 election fast approaching and a new administration potentially on the horizon, defense-wide reform poses fewer roadblocks in Congress and DoD for Esper and Norquist to make an impact in this short timeframe. Immediate savings to reinvest in the FY 2021 budget cycle will nevertheless be difficult to come by given the activities supported by defense-wide funding, but a balanced, realistic approach in which tough decisions are made could yet bear fruit.

Seamus P. Daniels is a research associate and program manager for Defense Budget Analysis in the International Security Program at the Center for Strategic and International Studies in Washington, D.C. 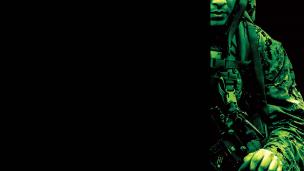 The ‘Rule of Thirds’ Is Bunk
Defense One | Seamus Daniels
May 17, 2021
Interactive

Focusing on readiness in the short term and long term
ABC7 | Government Matters
February 16, 2021
View all content by this expert