One common complaint heard from European governments (and others) is that the United States isn't really serious about banning Chinese telecom suppliers like Huawei. They point to the presence of Huawei equipment in U.S. telecom networks as evidence that the risk of using Huawei is exaggerated. While the charge is a bit of self-serving and an excuse for inaction by some other governments, it reflects a degree of distrust and a misunderstanding of U.S policy. The FCC has a chance to change this in November in the upcoming vote on "Protecting National Security Through FCC Programs."

Another common complaint, and a reasonable one, come from the smaller U.S. telecommunication service providers that have installed Huawei on their networks. This was a rational decision by these companies back before China became belligerent. Now, however, most of these smaller telecommunications companies cannot afford to remove and replace Huawei technology. The FCC has a chance to change this as well.

The FCC has already proposed prohibiting the use of its Universal Service Fund (USF)—which is used to ensure access to telecommunication services in low income or rural areas—to purchase equipment or services from any companies (in this case, Huawei and ZTE) identified as a national security risk to communications networks or supply chain. The November vote will confirm this, in addition, and most importantly, propose to allow the use of USF money to reimburse smaller carriers for removing and replacing equipment from these Chinese companies. Doing this is essential for better network security and for strengthening U.S. diplomatic efforts with allies, and the FCC is taking an important and valuable step in doing this.

By now, most people know that China's 2017 Intelligence Law compels all Chinese companies to cooperate with the Ministry of State Security or the People Liberation Army when asked. There is no recourse or appeal. Senior Huawei executives, with their close ties to the Chinese security services state and the extensive support they receive (both in funding and in espionage support), would be unlikely to oppose any request. Huawei itself has a long record of involvement in espionage. Many know that the network equipment provided by Huawei to the African Union (AU) headquarters was sending all that had been written or recorded that day at the AU to China every night at 2:00 a.m. A recent, high profile case involved a Huawei salesperson in Poland, formerly a Chinese diplomat, who had recruited a top Polish military cybersecurity specialist as a spy. This was not a commercial espionage, but it is also not a unique case. Huawei, of course, claims they had no idea, immediately fired the person, et cetera, but these protests are undercut by a two-decade record of espionage.

Huawei claims, of course, that it is not an agent of the Chinese state or the Chinese Communist Party and that using their equipment does not create a national security risk. This claim is touching but unpersuasive. A robust public relations campaign is one of Huawei's strengths, but even if one were to accept its assertions of innocence, the real question is, do you trust the Chinese Communist Party not to spy on the United States? This would be a serious mistake. In the last few years, China has accounted for the great majority of espionage cases in the United States—more than any other country. In the last 20 years, public records show that there have been 137 cases of Chinese espionage aimed at U.S. military, research, and business targets. Some have argued that Chinese espionage is so extensive and network security so poor that using Huawei doesn't noticeably increase risk, but this is like arguing that since one room of your house is on fire, it is okay to set fires in others; and most people realize that as the United States and other countries move to the next generation of telecommunications network equipment and services, the risk of using untrustworthy equipment supplied by a potential belligerent will increase greatly.

Major U.S. telecom companies have already removed Huawei equipment from their networks. This means that major urban areas and a significant portion of the population are no longer at risk. However, smaller rural carriers in the United States still use Huawei equipment, and they are often located near military or research facilities and provide them with services. We know from a number of counterintelligence cases that China uses geographic proximity to these kinds of facilities to collect intelligence against the United States. Leaving Huawei in these networks creates real risk of espionage; allowing the use of USF money to rip and replace will eliminate this risk.

To quote Bruno Kahl, the head of Germany's national intelligence service (Bundesnachrichtendienst or BND) in public remarks on Huawei to Germany's parliament “Infrastructure is not a suitable area for a group that cannot be trusted fully.” The FCC should be commended for its work to safeguard national networks, and it should take Kahl's advice to heart when it votes on USF funds this November.

Cybersecurity in the Quantum Future
June 15, 2021
In the News

How Does Facial Recognition Work?
By James Andrew Lewis
June 10, 2021
In the News 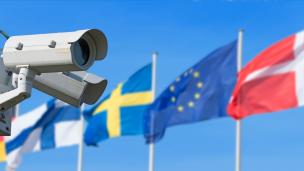 Should the United States Enter a ‘No-Spy’ Agreement with Germany and Other EU Partners?
By James Andrew Lewis
June 9, 2021
In the News