Last week, the Organization of Petroleum Exporting Countries-plus (OPEC+) extended its Declaration of Cooperation for nine months until the end of the first quarter of 2020. In doing so, the organization agreed to maintain production cuts of 1.2 million barrels per day, reiterated its goal to reduce inventories to a more reasonable level, and expressed its desire to improve the rate of conformance of individual OPEC+ countries. The charter of cooperation between OPEC and Non-OPEC countries was also formalized and cited as evidence of the group’s longer-term commitment to monitor and manage markets to ensure balance. Here follows a brief takeaway on the technical issues to emerge from these decisions and discussions.

Probably the most technically consequential announcement made at the OPEC meeting was Saudi oil minister Khalid Al-Falih’s reference to a new metric and target for assessing the balance of the market. Moving to ditch the bloated five-year rolling average, the aim now will be to draw oil inventories into the 2010-2014 range. Al-Falih noted that stocks are currently 240 million barrels above the 2010-2014 average, which implies that the group is once again utilizing commercial oil inventory data of countries from the Organization for Economic Cooperation and Development (OECD). 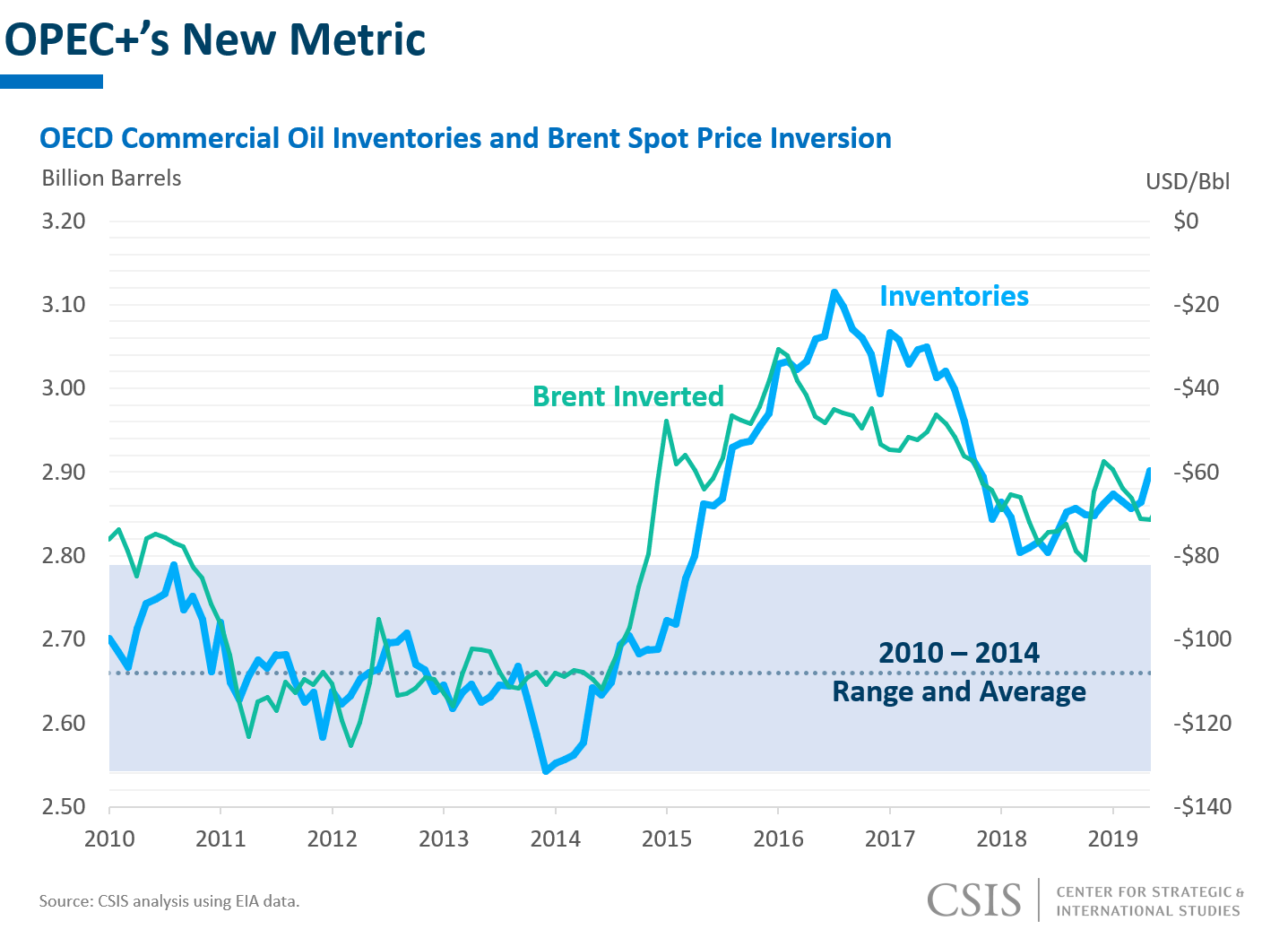 It is important to note that Al-Falih when referencing this metric stated that the goal was to target the range and not the average, which appears to have been conflated in the news. “The range” can be calculated in several different ways but given that Al-Falih cited the average over the total timeframe between 2010-2014, we can assume the range to be the difference between the high and low points for the same period. To get into the range, the group will have to reduce OECD inventories by approximately 100 million barrels. This is a daunting task given current market conditions, but certainly more realistic than getting down to the average which would require a drop of 240 million barrels. Getting to the high end of the 2010-2014 range could indicate a price target of at least $75, while reaching the average would imply prices north of $100.

Al-Falih said that the group is using several metrics to asses market balances but referenced the 2010-2014 period as representing a more “normal” time. It is a static metric unlike the rolling average, which continues to trend upward on account of losing lower inventory years to more recent higher inventory data points. However, one potential problem with this target is that not only have the volumes of OECD commercial inventories changed but their function is also likely somewhat different due to the procession of production growth in the United States among other factors. Global inventories of course would be ideal to measure market balances, but the quality of that data remains poor, and since the markets typically respond to OECD levels, it makes sense for the group to target this figure.

A further problem with the above metric, as Russian energy minister Alexander Novak pointed out, is that it does not account for changes in demand over the past 10 years. Some have suggested a more useful metric to put inventory levels into perspective is days of demand coverage, which tells us how many barrels are available in storage to meet forward levels of demand. Adjusting for seasonality of demand by using the monthly range and average should further improve things. Looking at this measure in the chart below, we can see that OECD inventories in terms of supply coverage are approximately 1.3 days above the 2010-2014 range and nearly 2.4 days above the average level over that period. 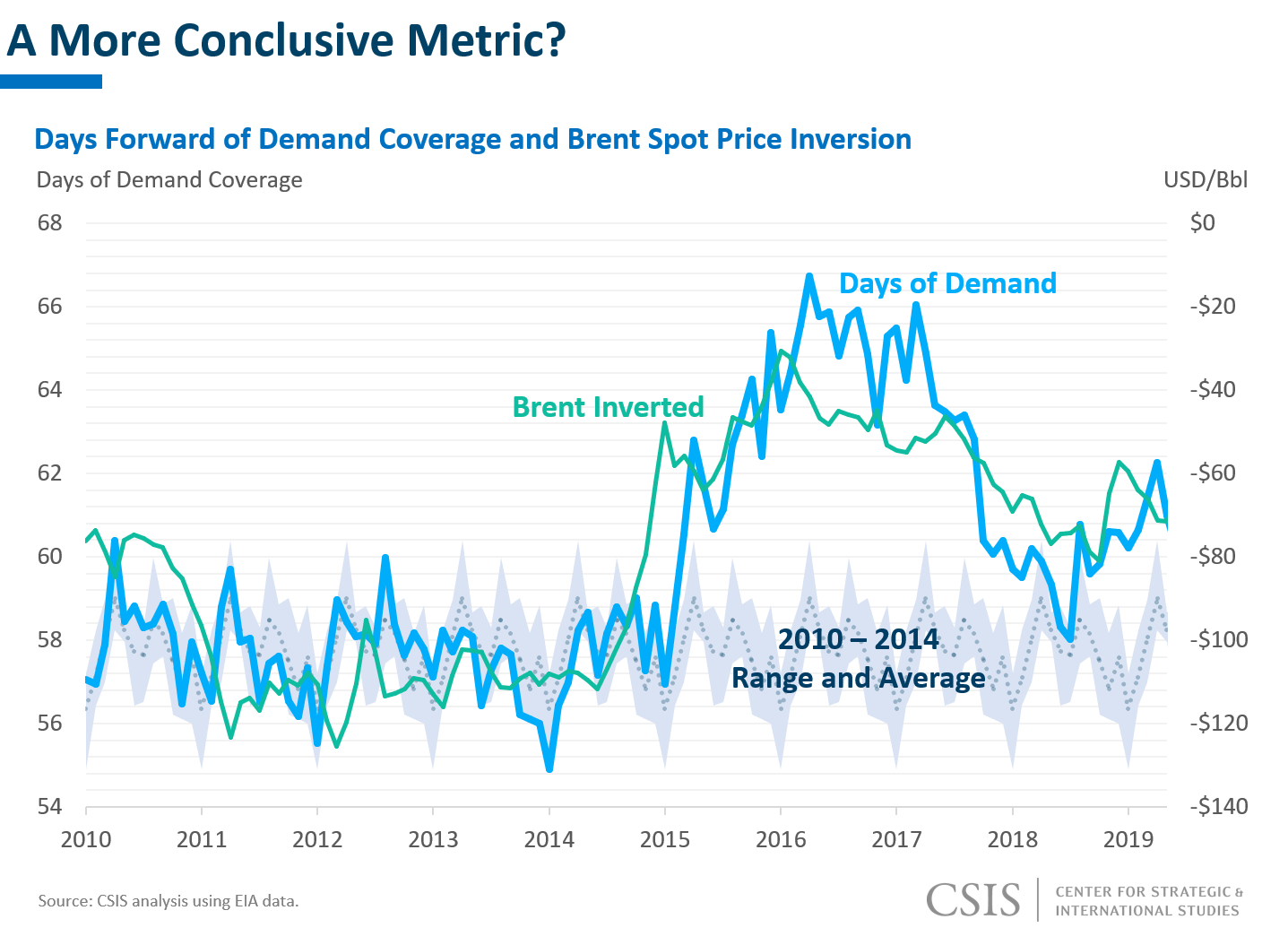 Bringing inventories down to get within this range of demand coverage, and keeping it there, is likely a more achievable and useful reference point for the organization. However, the biggest uncertainty right now for the market appears to be demand; it was very weak in the first quarter of the year, and so incorporating current demand realities is vital, but this measure is only as reliable as the current demand forecast. Each metric will inevitably have its own distinct pitfalls, which suggest there should be a multitude of metrics to measure balances and the condition of the market including those that incorporate spare capacity data, the velocity of stock movements, non-OECD commercial inventory levels, and developments in the futures market. The Joint Ministerial Monitoring Committee (JMMC) has been tasked with evaluating such a system of metrics, and so further clarification can be expected on these points in the coming months. Regardless of all this talk of metrics, it is likely that the real target for OPEC+ is a price level that balances budgets but does not encourage too much U.S. shale production or create demand destruction.

With demand being the biggest uncertainty for the group right now, it featured quite prominently in post-meeting press conferences. Khalid Al-Falih noted the positive developments to emanate from talks on the sidelines at the G20 meeting between the United States and China. The organization is now more confident that economic growth and industrial output will pick up in the coming months, which will translate into stronger levels of oil demand. But the trade issues between the two largest economies in the world have not disappeared, and the latest developments in the current dispute appear more akin to a “truce” than any significant breakthrough. As a result, the organization reiterated its intent to monitor the market and to adjust accordingly, should new demand realities arise.

The other positive aspect for their efforts is that the oil market is moving into a period of typically higher seasonal demand, which should further support their bid to draw down inventories. Recognizing this seasonality, they have decided to see the curtailment all the way through the first three months of 2020 when demand will once again soften, in the hope to avoid an expected build of 100 million barrels. 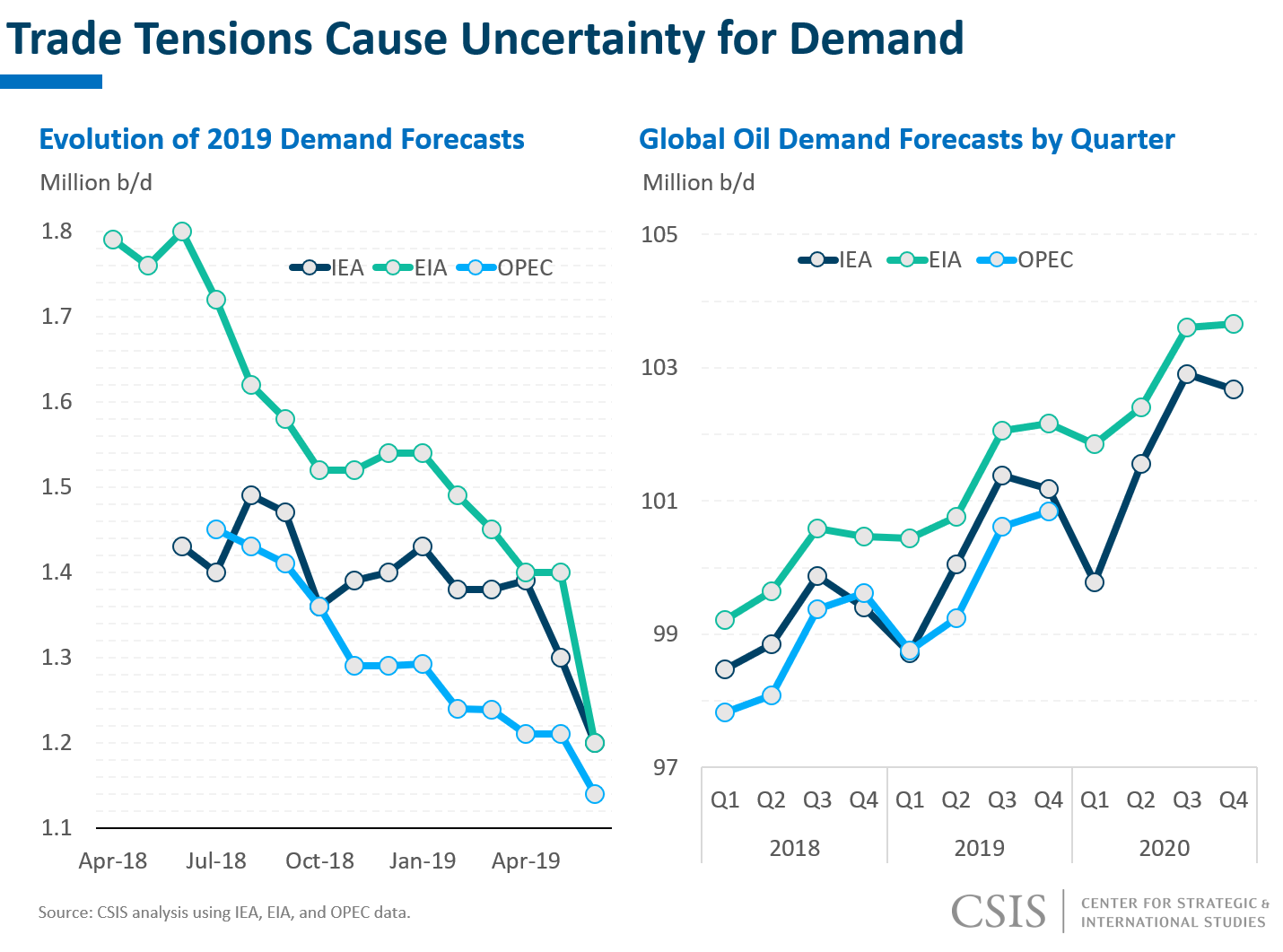 As we covered in depth in this piece, while OPEC+ has achieved full compliance to date with the production agreement, the breakdown of the data behind these numbers remains far from straightforward. Saudi Arabia is doing the heavy lifting with active support primarily from the UAE and Kuwait. Involuntary losses from Kazakhstan, Angola, and Mexico have also provided a substantial boost. However, on the other end of the spectrum, Iraq, Nigeria, and Russia have missed their targets by quite a bit. The rest of the contributions are pretty insignificant, but cumulatively they can make a difference.

Khalid Al-Falih noted in his remarks that compliance has not been uniform and that Saudi Arabia is doing more than its fair share. He highlighted that the JMMC will seek to ensure that efforts will be directed on improving conformance of individual countries. How much success they will have in boosting these rates remains uncertain. When questioned whether Saudi Arabia was willing to continue to over comply and compensate for underperformance by other countries, Al-Falih stated that there wasn’t anything in that they did in the first half of the year that they wouldn’t do in the second but reiterated his confidence that partners will step up to the plate and deliver on their commitments. 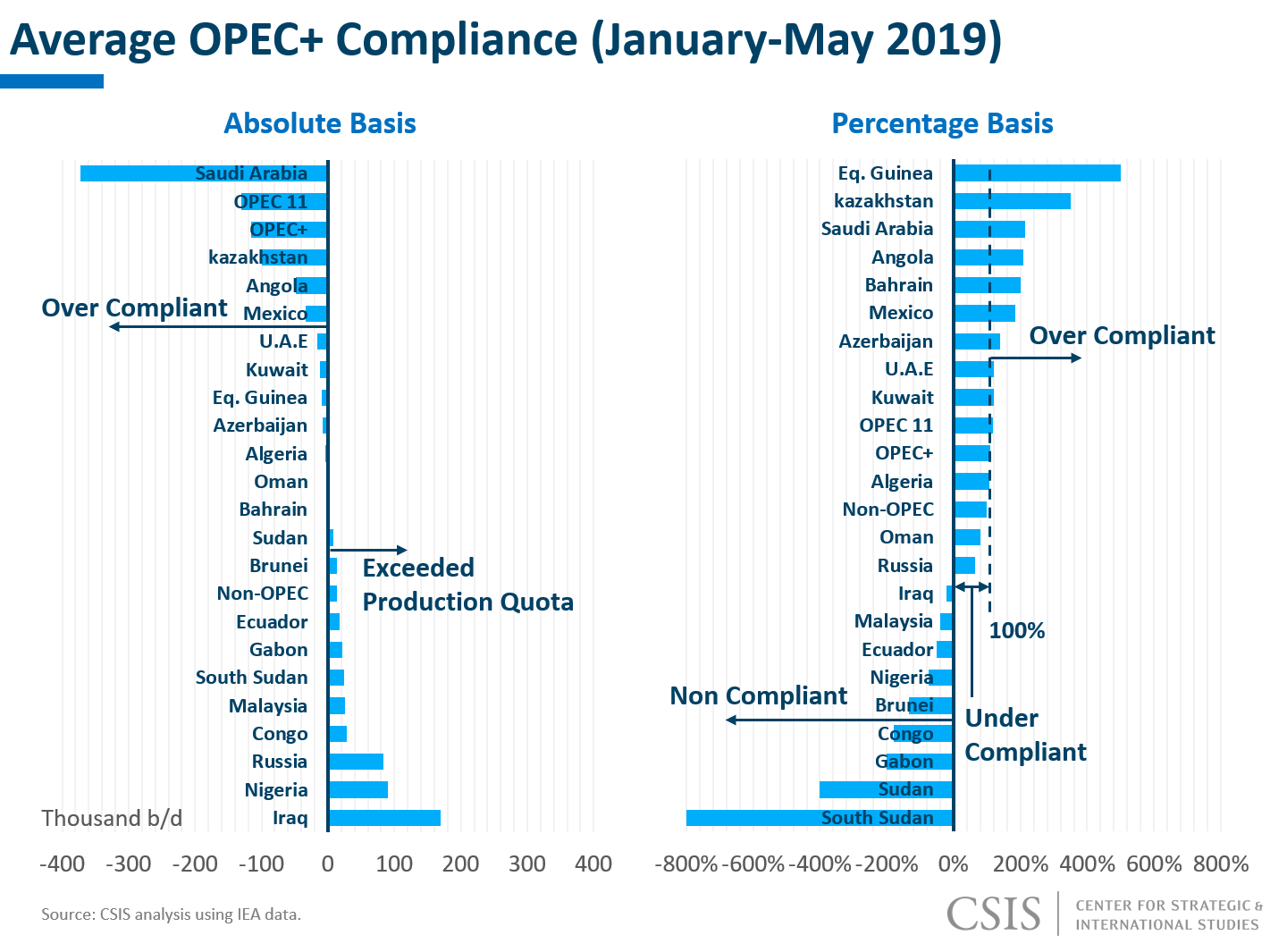 The elephant in the room since 2016, of course, has been U.S. production growth. The organization’s leaders, however, this time around, more directly tackled those issues head-on in their responses. Khalid Al-Falih highlighted his confidence that U.S. shale will “peak, plateau, and then decline just like every other basin in history” but recognized the uncertainty over when. In response to this dynamic and a recognition that market volatility will not disappear anytime soon, the OPEC and Non-OPEC countries signed a charter to formalize the OPEC+ group, underscored its openness to take on new members, and reiterated that their efforts to ensure balance will require ongoing monitoring and commitment to act when market conditions necessitate. 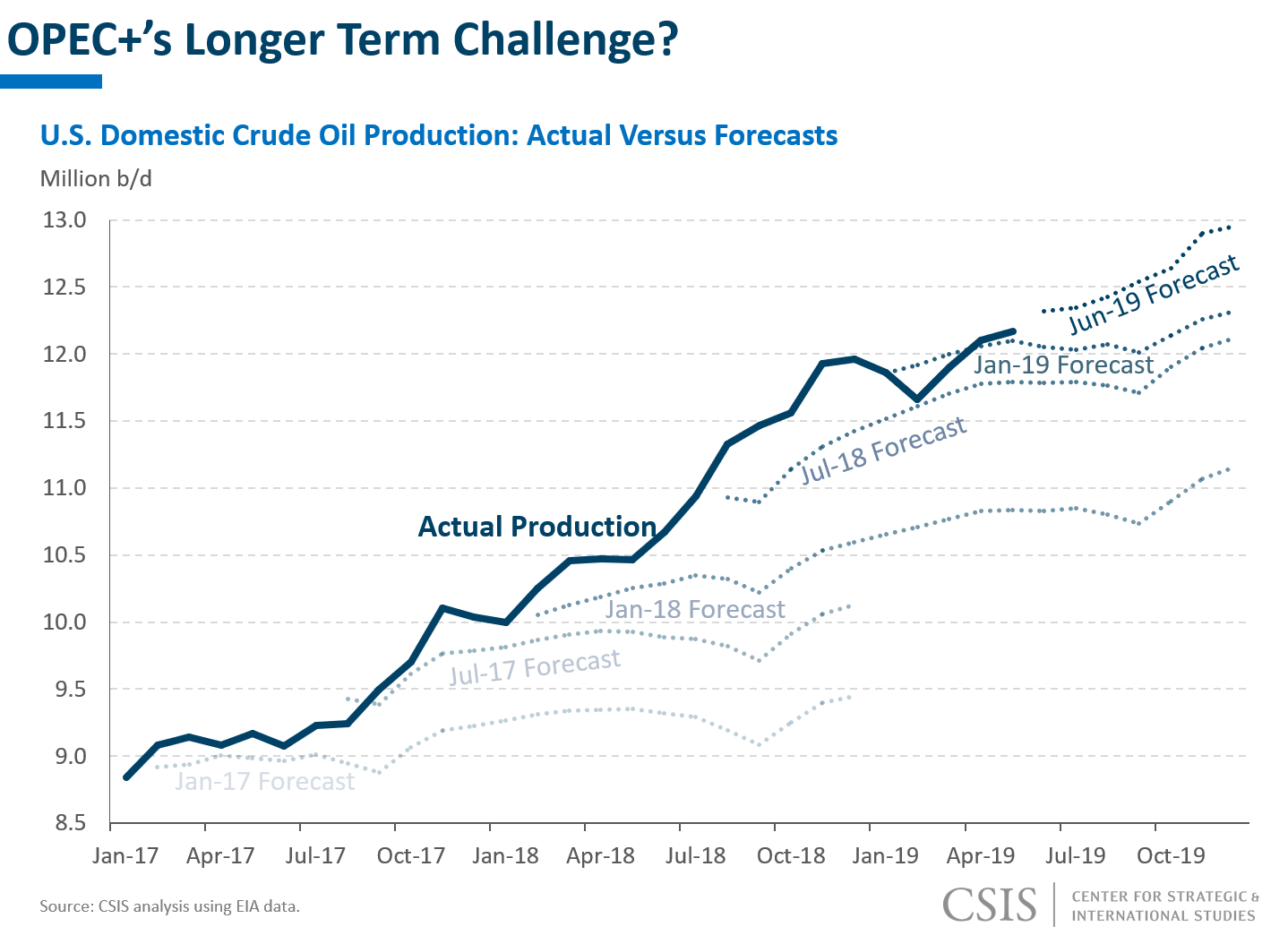