U.S. and Iranian Strategic Competition: The Proxy Cold War in the Levant, Egypt and Jordan

US competition with Iran has become the equivalent of a game of three-dimensional chess, but a game where each side can modify at least some of the rules with each move. It is also a game that has been going on for some three decades.  It is clear that it is also a game that is unlikely to be ended by better dialog and mutual understanding, and that Iran’s version of “democracy” is unlikely to change the way it is played in the foreseeable future.

The Burke Chair at CSIS is preparing a detailed analysis of the history and character of this competition as part of a project supported by the Smith Richardson Foundation. This has led to the preparation of a new draft report entitled US and Iranian Competition: The Proxy Cold War in the Levant, Egypt and Jordan.

This report is available in two versions:

Iran’s efforts to expand its regional influence in the Levant, Egypt and Jordan are a key aspect of its strategic competition with the US. Nearly twenty years after Israel’s invasion of Lebanon in 1982, and five years after the 2006 Israel-Hezbollah War, the US and its allies continue to struggle with the realities of Iran’s growing influence in the region and its use of proxy and asymmetric warfare. The Islamic Republic has developed strong ties with Syria and non-state actors in the region, including the Lebanese Shi’a group Hezbollah and the Palestinian Hamas Islamist movement in what Iranian and Syrian leaders have dubbed the “Resistance Axis.” Iran continues to exploit Arab-Israeli tensions in ways that make it an active barrier to a lasting Arab-Israeli peace, while the US must deal with Arab hostility to its strategic partnership with Israel. At the same time, both the US and Iran face new uncertainties in dealing with Egypt, Syria, and the wave of unrest in the Arab world.

Both the US and Iran face an unprecedented level of policy instability in the Levant, and the rest of the Middle East and North Africa, that affects every aspect of their regional competition. At present, no one can predict the outcome in any given case. Even the short term impact of changes in regimes is not predictable, nor is how they will affect the underlying drivers of regional tensions. It is particularly dangerous to ignore the risk of replacing one form of failed governance with another one, and the prospect of years of further political instability or upheavals.

Syria has been a challenge for US policy-makers for decades.  Yet the current round of instability is unprecedented and the US is not likely to enact a coherent strategy in the short term. This in turn informs the future pace and form of competition with Iran over Syria.

While Lebanon has been relatively stable during the current period of upheaval, there are real risks of instability as well as opportunities to manage security politics in the Levant that the US should not ignore.

Lastly, US policy towards Egypt and Jordan are driven by a number of common factors that have impacted whether or not these two key US allies become exposed to Iranian influence and interference.
Comments on this draft will be extremely helpful and should be sent to acordesman(@)gmail.com.

Reports published to date include:

Reports in development include:

If you wish to be placed on the circulation list for these and other Burke Chair reports, please send your email address and contact data to amausner@csis.org

Downloads
Download PDF file of "U.S. and Iranian Strategic Competition: The Proxy Cold War in the Levant, Egypt and Jordan"
Written By

Most Recent From Aram Nerguizian

The Lebanese Armed Forces, Hezbollah, and Military Legitimacy
By Aram Nerguizian
October 4, 2017
In the News

Free passage for ISIS: Was Hezbollah-backed deal a jab at Lebanese Army?
The Christian Science Monitor | Nicholas Blanford
September 7, 2017
In the News 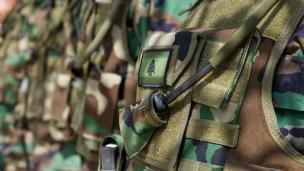 The Lebanese Armed Forces, Hezbollah and the Race to Defeat ISIS
By Aram Nerguizian
July 31, 2017
View all content by this expert