This week, India’s minister of defense, Rajnath Singh, and minister of external affairs, S. Jaishankar, were in Washington, D.C., for meetings with Secretary of State Anthony Blinken and Secretary of Defense Lloyd Austin for the U.S.-India 2+2 Ministerial Dialogue. This was the first meeting under the 2+2 ministerial format since the start of the Biden administration, and it was held under the shadow of Russia’s invasion of Ukraine. The two sides adopted the 2+2 format for their primary annual ministerial meeting in 2018. The governments’ statement released at the conclusion of the ministerial dialogue can be found here.

Q1: What is the state of U.S.-India relations?

A1: In some ways, the relationship is at its highest point ever. Bilateral goods trade hit $113 billion in 2021, smashing the record of $92 billion set in 2019. The United States is India’s top defense exercise partner and an increasingly important supplier of defense equipment. And strategic collaboration through the Quad—a new partnership between the United States, Japan, India, and Australia—is opening the door to coordination on strategic commercial matters in unprecedented ways.

However, there are areas of real tension. Most significantly today is U.S. concern over India’s disinterest in directly condemning Russia’s invasion of Ukraine and related abstentions in repeated votes at the United Nations. Other areas of concern include matters of trade policy and human rights.

A2: Over the past 20 years, there have been multiple formats for our main annual ministerial meeting. In 2009, the U.S. Department of State led the strategic dialogue with India’s Ministry of External Affairs. In 2015, this was expanded to a U.S.-India Strategic and Commercial Dialogue, including both nations’ foreign ministers and commerce ministers. However, lingering gaps between how U.S. diplomatic policy leaders and defense policy leaders approach the relationship triggered a “recast” into the current 2+2 format in 2018. The Biden administration chose to maintain this format.

The format is important as our two nations see tremendous upside in the strategic areas of the partnership—and they need the most attention from senior policymakers. Commercial issues are not without tensions, as noted above—but trade and investment flows continue to grow.

The two sides have seen tremendous progress in defense relations since the 2+2 format was adopted. Specific steps include the creation of a new tri-service military exercise, posting liaison officers in regional commands, and reducing U.S. export barriers for military technologies.

Q3: What was accomplished at the 2+2 ministerial dialogue?

A3: During the weeks-long lead-in to the 2+2 ministerial dialogue, Russia’s invasion of Ukraine—and India’s disinterest in taking a hard position—dominated headlines. But in the days ahead of the actual visit, U.S. policymakers refocused attention on the upside to the relationship: our shared concerns about the future of Asian security.

There were some specific outcomes from the summit. These include an anticipated agreement on Space Situational Awareness. The governments have created a new U.S.-India Education and Skills Development Working Group, and the two sides announced their intention to create a “framework to advance cooperation in critical and emerging technologies,” such as artificial intelligence, quantum computing, and semiconductors.

The two sides reiterated their desire to restart dormant workstreams, such as the U.S.-India Commercial Dialogue and the U.S.-India CEO Forum. These platforms can help assuage continued tensions over commercial issues. Our respective development agencies are poised to work more closely in engaging third countries.

There was also an aspirational announcement that would significantly move the U.S.-India relationship to another level. The ministers announced their intention to explore utilizing Indian shipyards for repairs on U.S. Navy vessels under the U.S. Military Sealift Command (MSC). The fact that such points are hardly noticeable in the press announcement indicates the qualitative change that relations have taken in the last 20 years. Back then, such an agreement would have been unthinkable.

Q4: What was not accomplished at the 2+2 ministerial dialogue?

A4: Despite the important announcements outlined earlier in this brief, areas of tension remain. Perhaps most importantly, the United States did not clarify a path ahead on the potential application of sanctions against India under the Countering America’s Adversaries Through Sanctions Act (CAATSA). This is in reaction to India’s long-pending purchase of Russian-made S400 missile defense systems. While the purchase predates Russia’s invasion of Ukraine, the invasion makes sanctions relief more difficult.

Apart from a clear pathway forward on CAATSA sanctions, other key issues remain in limbo. The two sides did not announce the plans to resume the tri-service military exercise, Tiger Triumph. The exercise was first launched in 2019 to great fanfare but has not been held since.

Also, longstanding commercial disputes did not receive a mention in the statement. While the 2+2 ministerial dialogue is not meant to handle the day-to-day commercial issues, the business communities in both nations remain concerned that the list of commercial disputes continues to increase.

Q5: What is next in U.S.-India relations?

A5: As the Russian invasion of Ukraine evolves, U.S. pressure on India to take a tougher line will continue—especially as further human rights atrocities come to light. India’s position may change incrementally, as it has already, but a sharp break from Russia is unlikely. This will continue to make a CAATSA waiver decision harder than it would have been a few months before.

The next major milepost is the Quad leaders’ summit, expected in Tokyo in May. So far, the Biden administration has put a great deal of effort and attention into building the Quad. Its workstreams are focused on issues at the intersection of “commercial” and “strategic,” such as emerging technologies, critical minerals, regional infrastructure, and more

As indicated in the 2+2 ministerial dialogue press statement, the governments want to revitalize two of our primary workstreams on business issues: the U.S.-India Commercial Dialogue and the U.S.-India CEO Forum.

Richard M. Rossow is a senior adviser and the Wadhwani Chair in U.S.-India Policy Studies at the Center for Strategic and International Studies in Washington, D.C.

Role of States in Accelerating India's Net Zero Transition
April 29, 2022
In the News 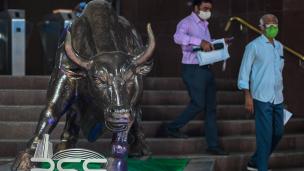 Rating India 2022: Key Opportunities and Risks
March 8, 2022
View all content by this expert