Reviewing the growing list of trade concerns between the U.S. and India, it feels like the relationship is spinning out of control. However, real trade — far more important in the greater scheme of things — is powering to record levels. Furthermore, U.S. exports to India are growing at a much faster rate than imports, helping bridge the sizeable trade deficit. Clearly, most companies see the economic relationship quite differently than our governments. There is a growing gap between real trade and trade policy considerations.

While China remains the main target among the Trump Administration’s multi-front fight against unfair trade practices, India has also been targeted with specific actions by the United States. In the last year India was added to the U.S. Department of the Treasury “Monitoring List” in its bi-annual “Macroeconomic and Foreign Exchange Policies of Major Trading Partners of the United States;” the Office of the U.S. Trade Representative initiated a review of India’s trade benefits under the Generalized System of Preferences program; and India has been hit moderately hard by the broader Section 232 tariffs on steel and aluminum. In addition, the Trump Administration has opened new fights with India through the World Trade Organization (WTO) dispute system over India’s export subsidy programs, and is threatening to impose new limitations on visas for high technology workers.

India is certainly not an innocent target. Through measures in the 2018-19 Budget, the Indian government hiked customs duties on nearly 50 product groups—many of which are significant goods in the U.S. trade mix. Since the Budget’s passage, India has initiated ad-hoc customs duty hikes on a range of other products to offset India’s spiking import bill. And other measures like price controls and local manufacturing rules harm U.S. exporters’ ability to export into the market. India is also threatening a range of “retaliatory tariffs” against America’s 232 tariffs, though implementation has been delayed.

These are all very real, measurable policy steps on both sides that require attention and resolution. So far, talks between officials from the U.S. Trade Representative and the Indian Ministry of Commerce and Industry have largely been inconclusive.

Over the last twelve months, U.S.-India goods trade has jumped considerably, increasing 14.6%. Bilateral trade is starting to balance, with U.S. exports increasing considerably faster than U.S. imports. This point flies in the face of the policy concerns outlined earlier.  It is hard to pinpoint reasons for this divide between trade sentiments and trade flows. Real trade is the result of a multitude of individual business decisions. There is also some lag time between policy measures and their business implications.

This positive news on trade is not cause for complacency. The underlying political reasons in both countries to walk away from trade integration will only increase in the foreseeable future. Ahead of its national election in the spring of 2019, Prime Minister Modi will want to highlight his concern for the poor and interest in job creation. Expanding price controls, and slowing imports are simple, preferred tools on these fronts.  Similarly, U.S. President Donald Trump clearly feels his own antagonistic approaches to trade are resonating well within his base of political support, and he may choose to continue along this line during the last two years of his term in office. It is not clear if the actual progress on trade can be sustained if both nations continue to take policy measures to limit trade.

Both governments must focus greater attention on avoiding the adoption trade policies that harm the overall relationship. There is plenty of guilt on both sides. The headwinds against trade may grow stronger. But there is a deeper, more important story- that bilateral trade is thriving, and balancing. 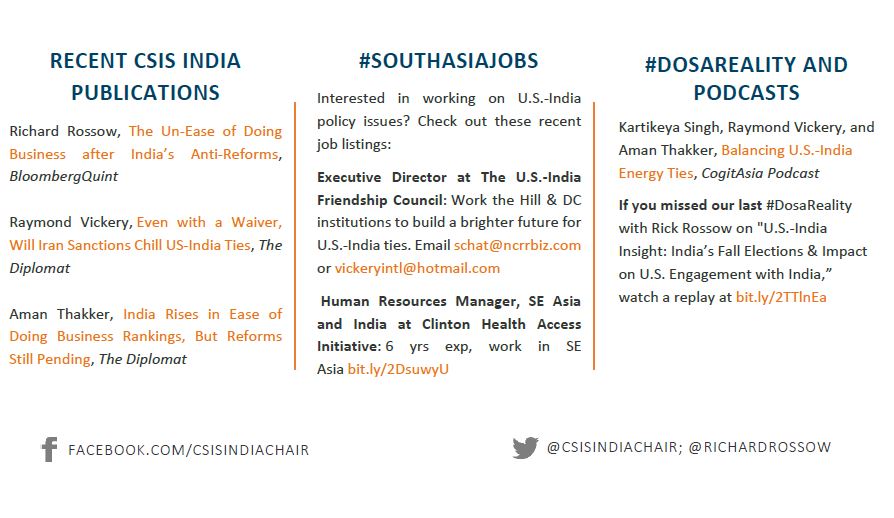