U.S. Strategy: Rebalancing Global Energy between Europe, Russia, and Asia and U.S. Security Policy in the Middle East and the Gulf

The war in Ukraine has already shown how dangerous it is for the U.S. to assume that it can rebalance its forces to one region and count on a lasting peace or detente in others. It now is all too clear that U.S. strategy must continue to focus on Europe as well as China. What is less clear is the extent to which the Ukraine War is an equal warning that the U.S. must have a truly global strategy – and one that continues to focus on other critical regions like the Middle East.

The sudden escalation of the Ukraine crisis into a major regional conflict and the need for political and diplomatic support in the UN as well as for sanctions are warnings that much of the U.S. success in deterrence and defense lies in creating long-term global diplomatic and political support as well as true and lasting strategic partnerships.

Ideally, that support will prevent or limit a conflict as well as decrease the risks of any confrontation with a major power like Russia or China. It will also create strategic partners in every region that can limit the need for the U.S. to deploy its own forces or support them if a conflict does occur, even though this inevitably means that U.S. strategy must be to find the best way to share the burden rather than shift it to other states.

At the same time, the sudden shifts in U.S. power projection, the need to send billions in aid and arms transfers, and a “rebalancing to Europe” are all warnings that the U.S. strategy cannot focus simply on China and rebalancing to Asia or on reducing its own military commitments by shifting the burden to NATO European states. The war is a strategic surprise that has shown that U.S. strategy must be truly global, be prepared for sudden and unexpected crises in unforeseen areas, and be focused as much on peacetime political and economic interests as on military relations with strategic partners and other states throughout the world.

Military competition with Russia and China cannot be separated from political and economic competition. The immediate need to help Europe eliminate its oil and gas imports from Russia is a critical case in point. In the short term, the need to create the alternative oil and gas supplies has made America’s strategic partners in Europe and Asia dependent on U.S. strategic success in dealing with its partners in other exporting states like the Middle East and the Arab/Persian Gulf states – and it provides a clear demonstration that virtually every aspect of America’s economic security is now dependent on global supply lines and communication.

Limited U.S. intervention in Ukraine has also shown that the immediate need to create the alternative oil and gas supplies for America’s strategic partners in Europe and Asia is dependent on U.S. strategic success in the Middle East and the Arab/Persian Gulf. Creating some form of longer-term European independence from Russian oil and gas exports will be far more demanding. It must create a new structure for energy supply, energy transport and infrastructure, and for energy security.

If the U.S. and its European strategic partners decide to establish a stable level of deterrence and defense against Russia, this will require them to establish lasting alternatives to oil and gas imports from Russia, particularly as the latest international analyses by the U.S. Department of Energy (DOE) indicate the demand will increase through 2050 in spite of major increases in renewables and alternative fuels.

At the same time, the moment one looks beyond the risk of near-term conflicts with China over Taiwan and the islands in the Pacific, these same studies warn that U.S. strategic partnerships in the MENA region and Arab/Persian Gulf will play a critical role in competing with China; securing the energy needs of America’s strategic partners in Asia; ensuring the stability of the global economy; exerting strategic influence over China; and providing the energy needed by key trading partners like Japan, Australia, and other developed Asian states. In practice, these flows of oil and gas exports to our major trading partner already leave the U.S. economy as dependent on the steady flow of MENA and Gulf oil and gas exports as it was on direct oil and gas imports in the past. 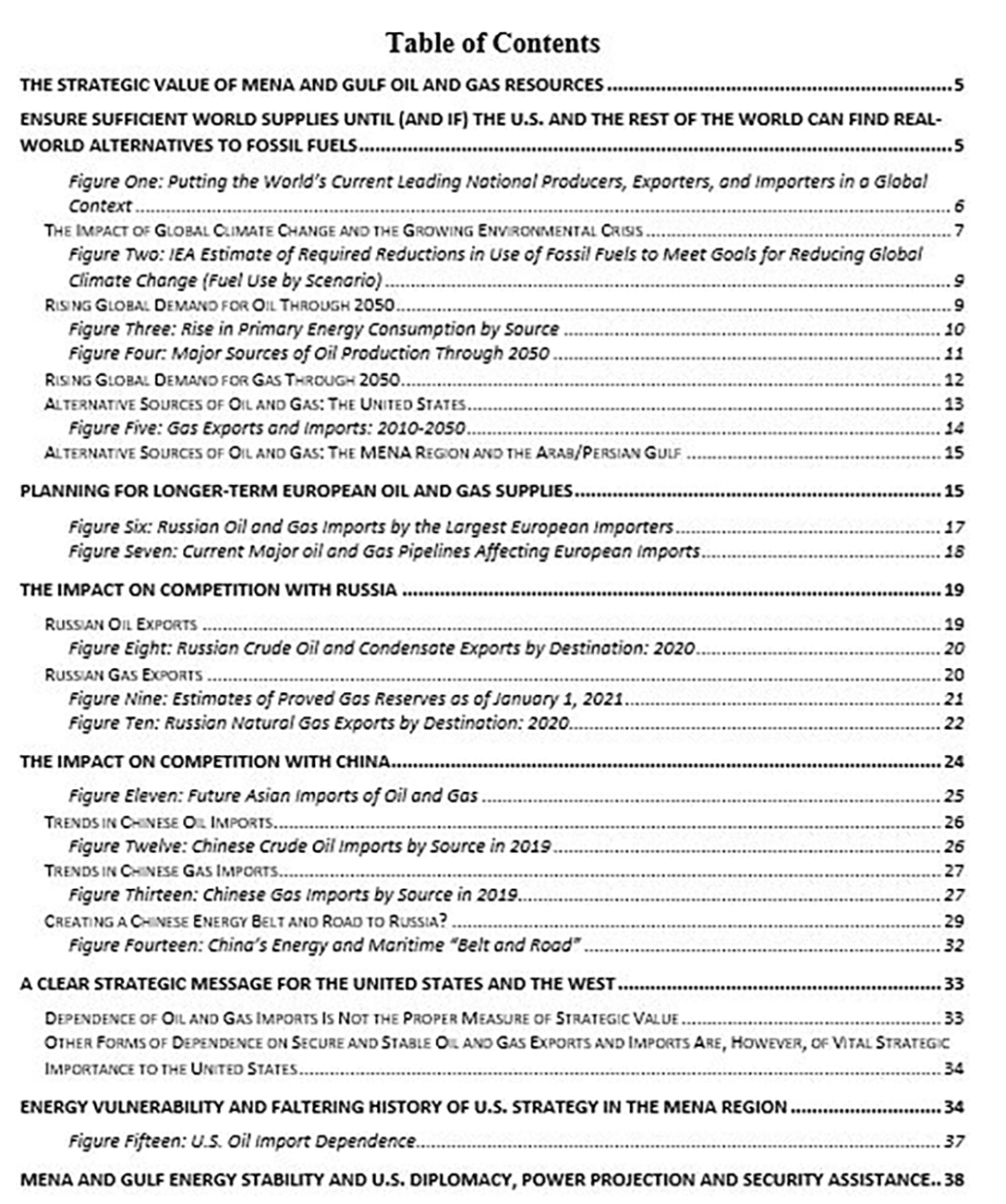 This report, entitled, U.S. Strategy: Rebalancing Global Energy between Europe, Russia, and Asia and U.S. Security Policy in the Middle East and the Gulf, is available for download at https://csis-website-prod.s3.amazonaws.com/s3fs-public/publication/220512_Cordesman_Rebalancing_Energy.pdf?67MZHvd0KqwPgSd1qLRJU6cyXrOIeFOX

Anthony H. Cordesman holds the Emeritus Chair in Strategy at the Center for Strategic and International Studies in Washington, D.C. He has written and directed numerous books and studies for CSIS; was awarded the Department of Defense Distinguished Service medal; and served in senior positions in the National Security Council, State Department, Office of the Secretary of Defense, Department of Energy, and staff of the U.S. Senate.