The Cost of War and Strategic Triage: Supporting Enduring Commitments versus “Endless Wars”

The United States clearly needs to refine and improve its current pattern of global engagements, and make hard judgments about its current active military engagements in Afghanistan and Iraq/Syria. The U.S. cannot survive, however, as a major, modern global economy and retreat from the world while other competitors seek to expand their influence through the global economy and develop their military capabilities.

America cannot turn away from its role as a global power and rely on random and arbitrary withdrawals and force cuts. It cannot preserve and build strategic partnerships by focusing on transactional burden sharing. Retreating from America’s enduring commitments can only end in making the U.S. its own worst enemy.

Neo-isolationism is not a viable option, but neither is repeating America’s past mistakes. On the one hand, the United States can only secure its position by maintaining an effective level of defense, and deterrence, and through the selective use of force. On the other hand, the U.S. must make hard choices as to where it makes commitments, must exercise “strategic triage” so that it put its forces where they can be effective, and must accept the fact that it can neither police the world or eliminate every source of risk.

The Burke Chair at CSIS is issuing a greatly revised version of an analysis of two key aspects of how the U.S. can properly exercise this strategic triage. It is entitled The Cost of War and Strategic Triage: Supporting Enduring Commitments versus Endless Wars, and it is available on the CSIS website at https://www.csis.org/analysis/us-strategy-strategic-triage-and-true-cost-war-supporting-enduring-commitment-versus.

The Sharply Dropping Cost of War

This half of the analysis is divided into several sections:

The first shows that the level of the burden U.S. military spending puts on the federal budget and the U.S. economy has not increased significantly in constant dollars since 1950, as a result of warfighting, and virtually all of the increases in federal spending have come from steadily rising spending on civil programs. The analysis shows that U.S. defense and national security expenditure in constant dollars have had little growth since 1950, and that virtually all of the pressure on the U.S. federal budget has come from steady increases in expenditures on social and domestic economic programs. It shows a steady long-term decline in national security spending as a percentage of both the U.S. GDP and total federal spending.

The second part shows that while the U.S. made drastic mistakes in strategy and supporting its strategic partners that wasted well over a trillion dollars in fighting the first decade of Afghan conflict and Iraq/Syria Wars, U.S. military engagements do not now strain U.S. military resources, the federal budget, or the American economy in spite of the fact that the U.S. is still fighting two wars . America’s “long wars” have now cost close to two trillion dollars in direct federal spending, but the U.S. has only spent only a comparatively limited portion of its national budget and economy on military these wars, and total U.S. overseas deployments are now far smaller than they were at the time of the Cold War.

The third part shows how U.S. has made major changes in its methods of war fighting since the U.S. invaded Afghanistan in 2001 and Iraq in 2003 that have radically reduced the cost of its present wars over time. It shows that the U.S. has already made critical changes in its military posture that have already greatly reduced the current cost of U.S. involvements in the Afghan and Iraq/Syria conflicts, and shown that the U.S. can find affordable ways to fight such wars.

These changes include shifts from a reliance on massive deployments to a reliance on host country forces advised and supported by small cadres of expert U.S. ground forces and continued support from precision air strikes. They exemplify the need to tailor U.S. military efforts to limit the costs and risks of war, focus on building up host country forces as quickly as possible, and carefully performing strategic triage in ways that avoid over-commitment to failed states.

The analysis then addresses how these changes must be judged by the broader standards the U.S. should apply to war fighting as part of strategic triage. It makes it clear that reducing the cost of war cannot justify past overspending on the wrong forms of war fighting or imply that the way the U.S. now fights in Afghanistan and Iraq/Syria properly serves America’s strategic interests. The analysis addresses the broader issue of how strategic triage should be applied to shaping future U.S. military commitments. It indicates that the U.S. has not properly applied strategic triage to any aspect of its current wars, that this has sharply raised their cost and has left their outcome uncertain and without any clear strategic objective.

At the same time, the data provided on the sharp reductions in the cost of the Afghan and Iraq/Syria wars does shows that the tendency of some critics to focus on the total costs of such war from 2001 to date – without examining how these costs have changed over time – is seriously misleading in showing the way the U.S. should apply strategic triage to its current and future wars and gray area operations. The U.S. needs to learn from its mistakes, not retreat from the world.

Accordingly, the second half of the analysis shows that the normal peacetime overseas commitments of the United States have never strained the American economy, are made in cooperation with America’s strategic partners, and provide a remarkably cost-effective mix of deterrence and containment of potential threats.

The analysis also shows that the broader deployments of U.S. forces overseas are now at a record low, and the forces that remain produce immense benefits in terms of strategic partnerships throughout the world, and that they are essential elements of any strategy that focuses on Russia and China, as well as the myriad of other threats and challenges that exist in the rest of the globe.

At the same time, this part of the analysis warns that the U.S. has not addressed massive failures in the civil side of its civil-military campaigns. The U.S. has reduced the costs of such operations largely by abandoning them, making claims to progress that it did not achieve, and failing to focus on both the cost of effectiveness of its civil operations. Worse, it is approaching the second decade of such war without any credible grand strategic plan for bringing lasting civil stability to either Afghanistan or Iraq. The U.S. has made critical advances in reducing the cost of the military half of its wars – and expanding the role of its strategic partners – but it has largely abandoned effective nation building, and efforts to reshape the failures of host country governments that are the key causes of extremism, terrorism, and violence. 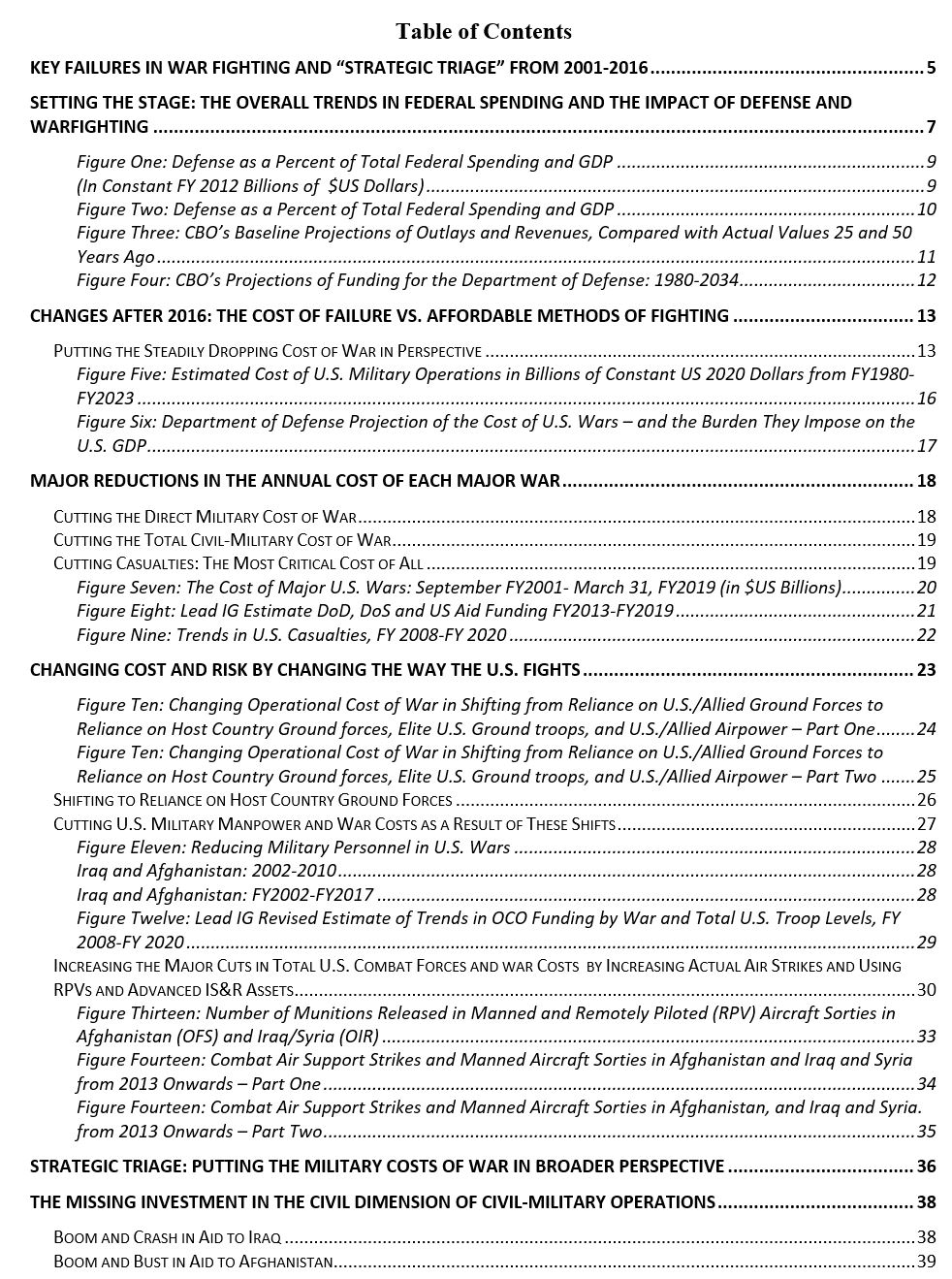 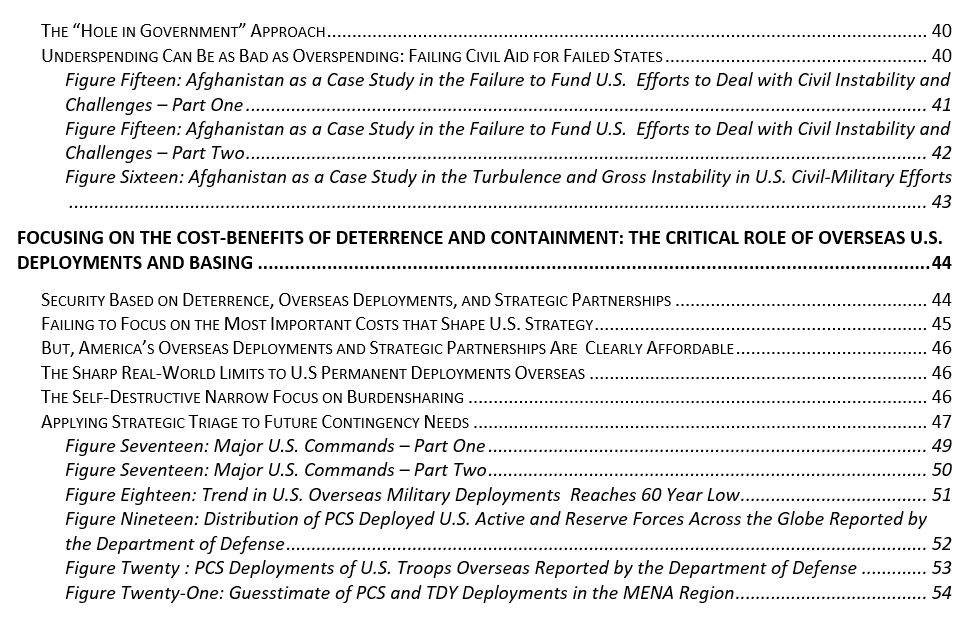