Back in December, we wrote that severely deteriorating economic conditions and social unrest in Venezuela appeared poised to unwind the ability of the Nicolas Maduro regime to govern. Lack of revenues had put the nation on the brink of, and eventually in, default, and Venezuela’s oil production and export volumes were in a death spiral. Last weekend’s (May 20) election results were heralded by Venezuela’s National Election Council as a resounding victory for President Maduro, though the international community remained largely unpersuaded. The United States and other regional leaders attending the G20 summit in Argentina roundly condemned the vote and refused to accept the legitimacy of the outcome, though predictably, Cuba, Russia, and China congratulated Maduro on his victory. Immediately following the elections, the Trump administration announced new sanctions aimed at prohibiting U.S. citizens and/or companies from buying debt or accounts receivable from the Venezuelan government, including Petroleos de Venezuela, S.A. (PDVSA). The Caracas government had previously been selling off debt as a means to generate emergency funds.

The surprise release this past weekend (May 26) of American missionary Joshua Holt, presumably as a good faith gesture by the Maduro regime, was welcomed by a White House still threatening to expand sanctions against Venezuela. Reportedly, prohibitions on condensate and refined oil products exports to Venezuela, the blocking of oil imports from Venezuela, and bans on U.S. dollar-denominated transactions with Venezuelan entities, as well as an expansion of personal sanctions on individuals, all remain under consideration by the Trump administration, although the timing and options choices are likely to be tempered by oil price and global oil supply considerations. It is also plausible that the administration might seek to couple any oil sanctions activity with the release of oil from the Strategic Petroleum Reserve (SPR) to mitigate supply losses and moderate price impacts. Subsequent to Holt’s release, Secretary of State Mike Pompeo confirmed that “U.S. policy towards Venezuela remains unchanged,” although intriguingly the mechanics of the release credited both Rafael Lacava, governor of Carabobo state (and long-time Maduro confidante), and former Spanish president Jose Luis Rodriguez Zapetero with playing instrumental roles in securing Holt’s return.

A Deteriorating Story for the Economy and Oil Output

Last November, President Maduro announced that the country was intent on restructuring its debt and named Vice President Tareck El Aissami (already under U.S. sanctions for drug trafficking) to head up the restructuring commission. By mid-month, S&P’s Global Ratings downgraded the issue ratings on the government’s bonds from CC to D and declared Venezuela to be in “selective default.” And while Rosneft has reported that its loans to PDVSA continue to be paid on schedule, China appears not to have renewed its two-year grace period on payments for the $19 billion it is currently owed. Russia restructured some $3 billion in loans to Venezuela last fall.

For the past several months, creditors of the beleaguered nation have largely held their fire (in part, unwilling to write off substantial losses), although several banks and investor/creditors have clearly begun exploring options and next steps. In terms of diplomatic relief, last month the governments of the 14-member Lima Group produced yet another round of condemnations of Maduro’s strong-arm tactics and his handling of the economic and humanitarian crises (inflation has ballooned to 17,000 percent, and the medical, hunger, and refugee problems are beyond crisis proportions), but it provided no tangible plan of action. Asset seizures, especially in the case of PDVSA-owned CITGO, had long been a possibility but one complicated by the status and classification of creditor classes, as shares of CITGO Holdings had been previously pledged in exchange for earlier loans. Nonetheless, last week ConocoPhillips began taking actions to secure PDVSA refining and product assets in the Caribbean under the terms of an international trade court order (as compensation for Venezuela’s seizure of Conoco assets in 2007). In particular, Conoco has reportedly targeted the Isla refinery in Curacao, as well as large storage and shipping facilities in Aruba, St. Eustatius, and Bonaire. And while Venezuela is appealing the decision, the seizures and threat of seizures of these refining and storage assets are impacting the loading and discharging of tanker cargoes, causing ships to be rerouted and potentially impacting onshore production and delivery infrastructure already besieged by personnel, maintenance, and equipment issues. As a consequence, and as a recent report by Wood Mackenzie illustrates (see figure below), Venezuelan oil exports are likely to be restricted to facilities in Jose, Puerto La Cruz, and Bajo Grande, causing logistical, loading, and possibly production issues as well as increased transaction costs. 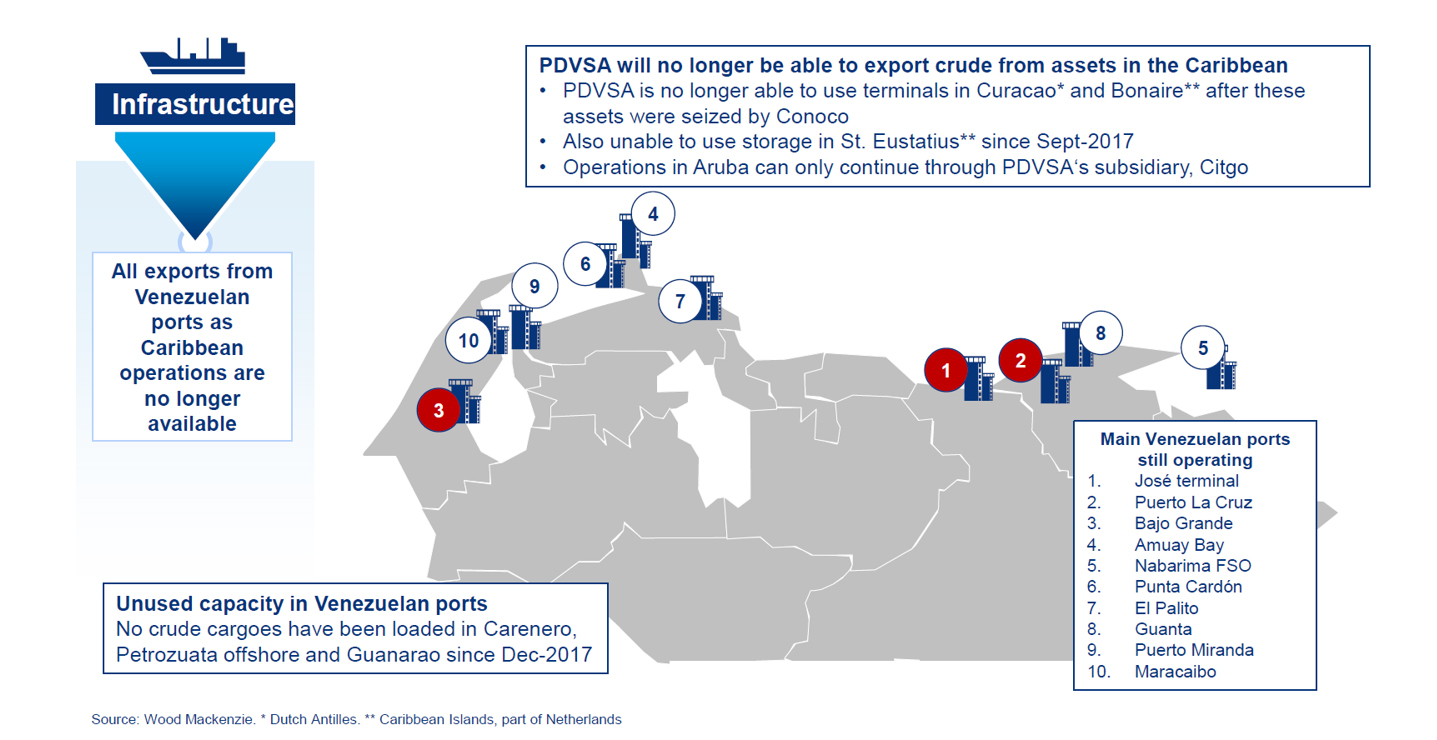 Maybe more importantly, the Conoco award may presage similar action by other creditors (e.g., Rusoro, a Canadian gold mining company has already sought relief, and other bondholders are now organizing to step up claims actions). Compounding an already bad situation, over the past several months a number of large international oil firms and service companies have effectively stopped or severely reduced ongoing cash investments and taken massive project write-downs, the impact of which has led to a more precipitous decline in Venezuelan oil production (over 75 percent of which comes from joint venture operations and serve as the backbone of the country’s oil-related operations). The lack of investment, manpower loss, and the suspension of operational maintenance has led to forced closures and widespread safety concerns.

At the end of last year, the financial and humanitarian story was appended with a series of political maneuvers, with Maduro detaining several senior PDVSA officials as well as CITGO’s acting CEO, Jose Pereira. Maduro then appointed General Manuel Quevedo, a Chavez loyalist with no energy experience, to oversee the energy operations and root out PDVSA corruption. Increasingly, military supporters of the president have moved into the management ranks of PDVSA, solidifying the government’s control even as production has plummeted. Last month, by presidential decree, Quevedo was granted broad powers to reorganize PDVSA and renegotiate contracts with international joint venture partners, including Chevron, Statoil (now Equinor), Total, China National Petroleum Corporation (CNPC), and Rosneft. Two of Chevron’s employees at the Petropiar joint venture were taken into custody.

Reduced national oil production and refining have resulted in product shortages and the need to import diluent (to blend with the heavy Venezuelan crude for processing and transport), diesel, and gasoline, including from the United States. Recent diluent shipments also reportedly landed from Iran and Iraq. Rig counts are down, and crude production (currently believed to be below 1.4 million barrels per day [mmbd]) is reported at its lowest levels in decades and down some 45 percent in just the last year. Projections for further losses in 2018 range from 300–500 mb/d—and likely more if deteriorating conditions worsen or accelerate.

As a consequence, crude oil exports have also declined dramatically. Shipments to the U.S. gulf coast have decreased by almost 40 percent (to less than 450 mbd) over the last year, and U.S. refiners have actively sought to replace Venezuelan barrels to meet refinery needs. China is also importing less Venezuelan oil, primarily due to the deteriorating quality of PDVSA’s crude output. As of February (the last month of statistics verifiable through the Energy Information Administration), over 90 percent of U.S. imports of Venezuelan crude oil were destined for only a handful of domestic refineries: PDVSA-owned CITGO facilities in Corpus Christi, Texas, and Lake Charles, Louisiana; Valero refineries at St. Charles, Louisiana, and Port Arthur, Texas; and Chevron’s Pascagoula, Mississippi, plant. Not surprisingly, over the same period there has been a significant upswing in imports of Canadian oil.

As a consequence of strong oil demand growth, the sustained commitment and discipline exhibited on the part of the OPEC/Non-OPEC Alliance to reduce oil supplies and work off the global inventory overhang, and heightened geopolitical risk associated with oil supply and/or political challenges in Syria, Nigeria, Libya, Iraq, Venezuela, and the Persian Gulf, the oil market is not only back in balance but in danger of being overcorrected. While oil prices have somewhat abated in the past week following media reports of an apparent agreement by Saudi Arabia and Russia to relax the current OPEC/non-OPEC freeze arrangement, Brent prices continue to hover just below $80/barrel (near multiyear highs), and U.S. gasoline prices are rising fast. Major consumers, including the United States and India, have warned OPEC members that increasing prices further endangers continued global economic growth, an issue the alliance is sure to discuss when it convenes next month in Vienna.

Ironically, while higher oil prices have provided Venezuela with an economic lifeline in the past, the dramatic collapse of production and exports makes it increasingly impossible for even such revenue inflows to alter Venezuela’s fate. Our last commentary concluded with the warning that a persistently cash-strapped Venezuela simply had run out of any remaining good options and that default threats were likely to become more manifest in the second quarter of 2018. Six months later, we remain convinced that for the foreseeable future things will only continue to get worse.