The Venezuelan Refugee Crisis: The View from Brazil

Shadowing the Maduro regime’s widely condemned May 20 presidential election, Venezuela’s man-made humanitarian crisis continues to metastasize, forcing hundreds of thousands of families to flee to neighboring countries. While Colombia is bearing the brunt of the mass exodus of Venezuelans, Brazil is also facing an unprecedented influx. More than 40,000 refugees, including indigenous peoples, have crossed the border into Brazil since early 2017. The majority of these refugees have crossed into and remain in Roraima, Brazil’s poorest and most isolated state. While the Brazilian government is doing what it can to address the influx of refugees and mitigate the humanitarian risks for both the Venezuelans and local residents, much more needs to be done.

As part of its continuing focus on the Venezuelan crisis, CSIS sent two researchers on a week-long visit to Brasilia and Roraima in early May. The team met with Brazilian federal government officials, international organizations, and civil society, in addition to assessing the situation on-the-ground at the Venezuela-Brazil border.

A Picture of Desperation

The stories of those fleeing Venezuela into Brazil are varied, but they all share the same push factors, including hunger and the general scarcity of even the most basic medicines. The CSIS team met a man named Martin in Roraima, who decided to leave Venezuela after the little food he could find by fishing through garbage bins could barely feed his children, who were rapidly losing weight. Martin and his 15 family members departed for the Brazilian border with no cash and minimal belongings. The group walked, hitchhiked, and begged their way across the 420-mile trek to Brazil. Scavenging for food at one point on the long walk, nine family members came close to dying after consuming a poisonous variety of yuca. Only through a “miracle” were they able to obtain an antidote at a rural hospital that was all but collapsed, lacking most medicines and medical equipment. Finally, after reaching Pacaraima, the border town in Brazil, Martin and his family walked another seven days and 115 miles south to Boa Vista, the capital of Roraima, to file for refugee status with the Brazilian Federal Police. After weeks of hunger and homelessness, Martin and his family all live in a shelter run by UN High Commissioner for Refugees (UNHCR) in Boa Vista. While their basic needs are now met at the shelter, their future remains grim and uncertain. 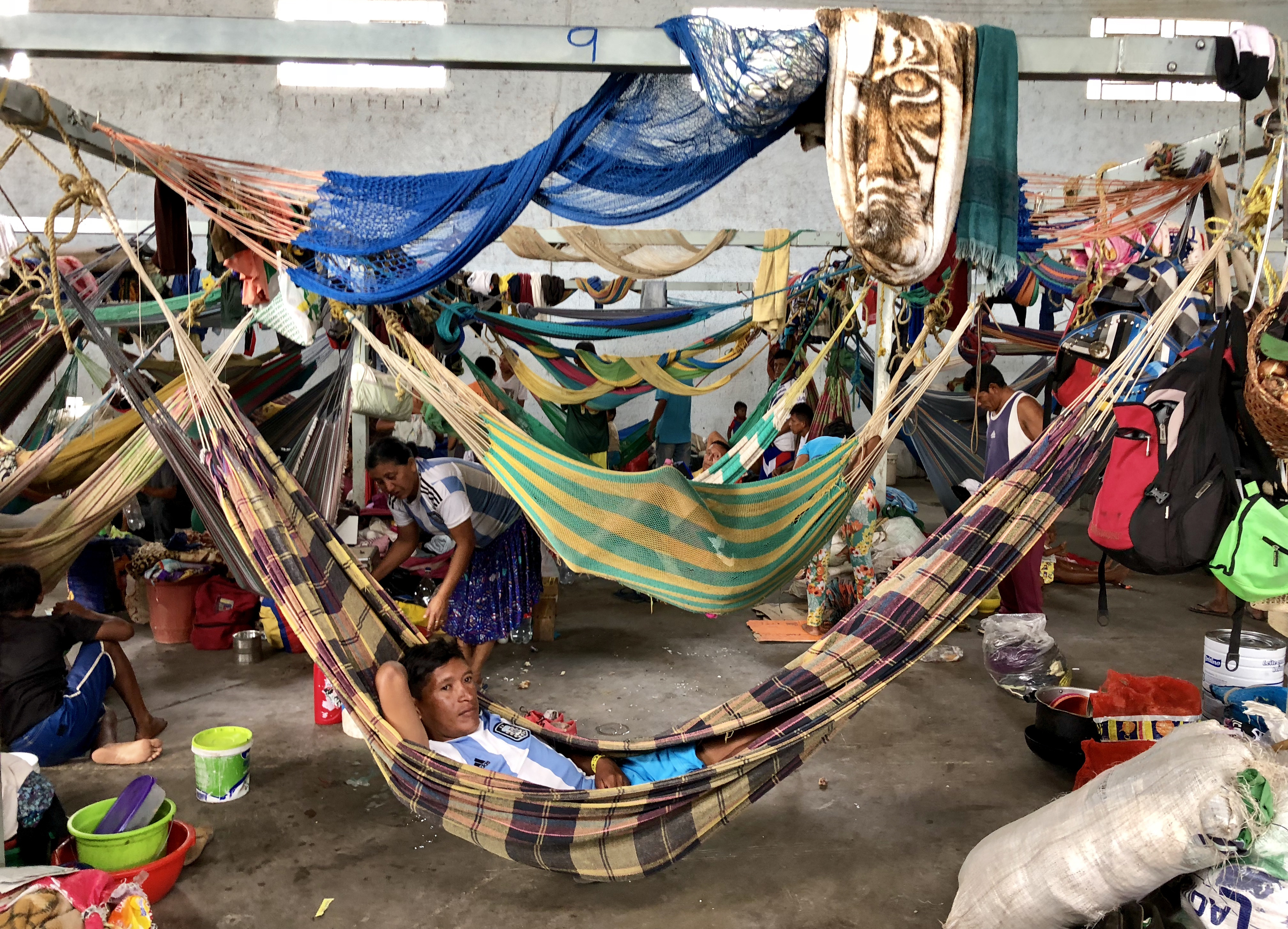 Stories like these are the norm in Boa Vista. Approximately 3,500 Venezuelans are now housed in nine refugee shelters in Boa Vista and one in Pacaraima, where they sleep in tents, bunks, or hammocks. Thousands more sleep in parks, abandoned malls, or on the sidewalk, awaiting the opportunity to be called off a waiting list for one of the shelters. Shelter residents receive food three times a day, but complain of the quality and quantity of such meals. They go out into the town every day, but most cannot find work. Many have turned to begging, sex work, or petty crime–which has only created deeper divides with the local residents.

Brazil’s response to the influx of Venezuelans had a turning point when Brazilian President Michel Temer visited Roraima in February of this year. Following his visit, Brazil declared a social emergency in the border state. As a result, the Brazilian federal government took over control of crisis management from state and local authorities, placing the military and police in charge of most operations and pledging $60 million of federal funding to respond to the crisis. Two strategic operations were created: Operación Acolhida, which focuses on the humanitarian crisis, such as providing shelters, food, and medicine, and Operación Escudo, which is focused on security risks such as drug trafficking. These two strategic operations, along with about a dozen Brazilian government agencies, are all coordinated by an overarching government agency named Casa Civil.

The main protagonists on the front line of the refugee crisis have been UNHCR, local Brazilian partnering agencies, and the Brazilian military, which provides food and security to the shelters. These agencies have had impressive success in setting up camps quickly and running them efficiently. Almost all the migrants we spoke with living in the camps reported feeling safe and well cared for. However, the local implementing partners already appear to be reaching the limits of their administrative and physical capacity. Although several more shelters are supposed to be built in Pacaraima and Boa Vista later this summer, the ultimate total capacity of all shelters planned will be only 5,000–a small fraction of the 40,000 Venezuelans currently in Brazil. If the humanitarian and migration crisis continues to worsen as expected, much greater capacity will be needed. 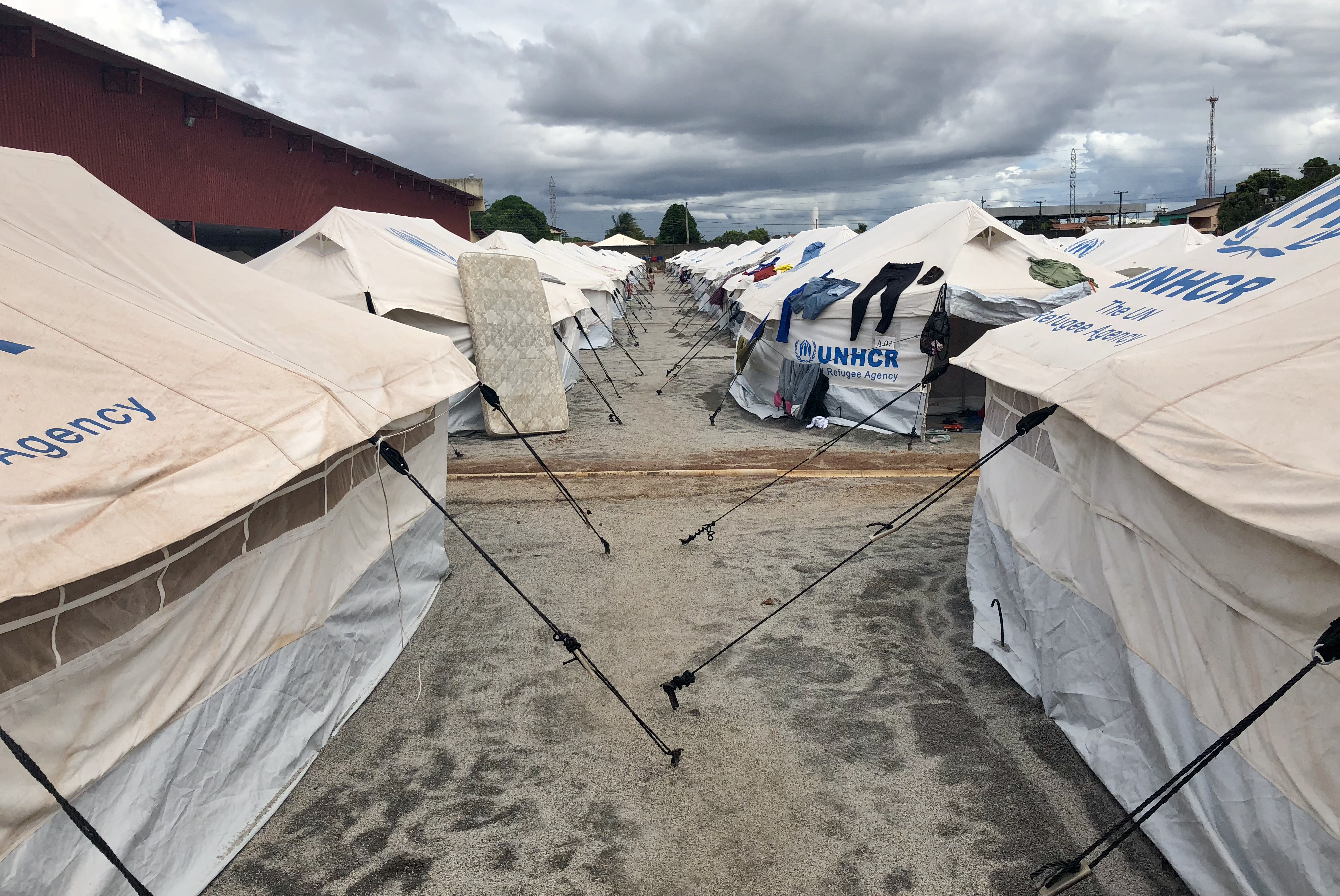 Despite Brazil’s best efforts to address the refugee crisis, the current response strategy is insufficient to meet the needs of the Venezuelans who have already settled in Brazil. More concerning is the fact that a contingency plan for the future does not appear to exist. According to Brazilian authorities, the number of daily crossings from Venezuela to Brazil peaked at approximately 1,200 earlier this year, and is currently at about 600 daily crossings on average. While it is difficult to predict how the numbers will evolve in the coming weeks and months, it is expected that there could be an increased flow over the summer as the economic conditions in Venezuela continue to deteriorate and as hope that President Maduro will exit the scene appears to fade.

Brazil has been reluctant to request comprehensive international support, such as from UN agencies, other than limited support from the UNHCR. Brazil’s government is distracted by its current political crisis and uncertainty over the outcome of the presidential elections in October. Brazil may also be debating whether visibly increasing its response capacity at its border might become yet another pull factor for more desperate Venezuelans. Brazil has always shown strong solidarity with its neighbors, and if the government is willing to accept international support, they will also be able to provide an effective humanitarian response.

The entry of 40,000 Venezuelans would appear to be a rather small number of refugees for a country of 208 million, but it represents almost 10 percent of Roraima’s population–a state with nearly half its land in indigenous territories, and with limited short-term employment potential. The language barrier and limited economic opportunities make it a difficult place for Venezuelans to settle. In response to these factors, the Brazilian government initiated a program to resettle refugees to other states voluntarily. This solution is not only expensive, but also can be a challenge for lower income migrants, as some host states reportedly request specific background and skill checks. The state and local governments of these host cities provide shelters for the migrants to live in their new cities, while the Brazilian private sector is also expected to play an important role, with some local companies starting to recruit refugees. As of early May 2018, the program has flown 700 Venezuelans to other areas of Brazil so far, and is expected to increase to a total of 2,000 in the coming weeks. Complicating these efforts, however, is the fact that many of the Venezuelan refugees in Roraima want to remain close to the Brazil’s border so they can return to their home country if a political transition occurs in Venezuela–an outcome that remains unlikely in the short term. 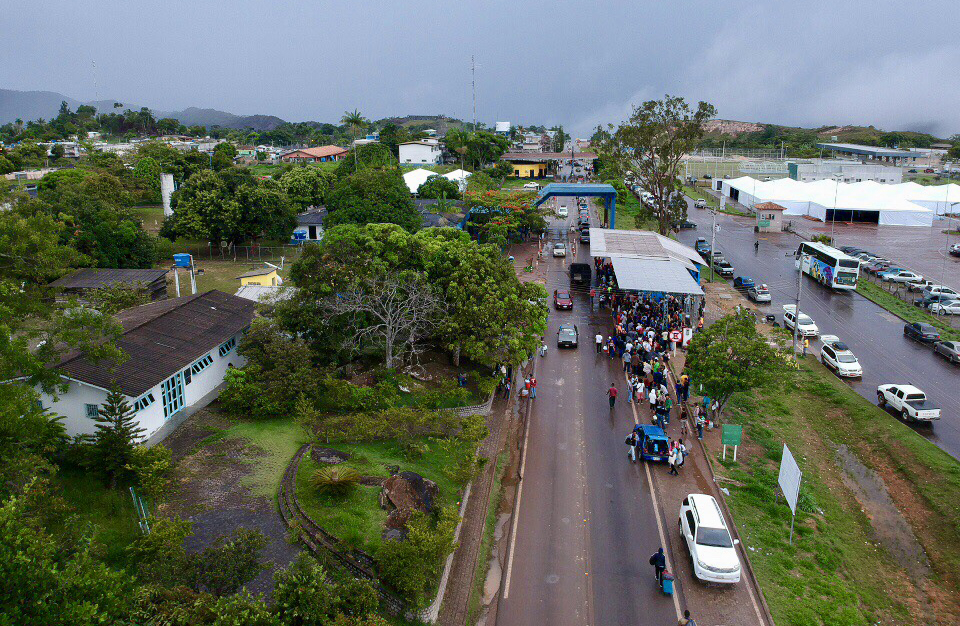 Given the pressing situation on Venezuela’s borders, it is important for the international community to engage in supporting Brazil, as it has begun to do in Colombia. The United States, regional states in Latin America, and the international community, should offer comprehensive help to Brazil and encourage the government to accept it in order to ensure better management of the developing refugee crisis. The private sector and civil society could also play an important role in alleviating the suffering of the Venezuelan people today. What is increasingly clear is that there will be no end to Venezuela’s humanitarian crisis until the Maduro regime departs the scene. The international community must continue to pressure the Maduro regime to step down and to allow the immediate distribution of international humanitarian aid.