Venezuela is becoming uninhabitable. The country with both the worst humanitarian crisis in the region and the highest inflation in the world is now facing a power outage that started on March 7. The blackout, which has been momentarily restored, covers most of the country’s territory and affects Venezuelans nearly everywhere. With partial or no electricity, running water, or functional telecommunications, the conditions inside Venezuela are similar to that of a country following a devastating natural disaster, such as a tsunami or a hurricane—except this crisis was entirely man-made. While power has been momentarily restored in the country, these blackouts are far from over. The Venezuelan Congress has declared a “state of alarm.”

The blackout-induced death toll is rapidly increasing, particularly in already-struggling hospitals that need power to keep patients alive. Water-related diseases, such as cholera and dengue, will only increase. Searching for food in trash cans and lootings are becoming the norm as starving Venezuelans desperately try to find anything to eat. Due to the country’s rapidly deteriorating situation, Secretary of State Pompeo is withdrawing the few remaining diplomats from the U.S. embassy by the end of this week.

Despite the unprecedented humanitarian emergency, Nicolás Maduro continues to respond with further repression. On March 11, Maduro issued on national television a public invitation to armed paramilitary gangs in Venezuela to “take action” and defend his revolution. In addition, a well-known journalist, Luis Carlos Diaz, was arrested by intelligence forces (SEBIN) earlier this week under charges of instigating crimes. Following significant international pressure on the Maduro regime, Diaz was released the next day under the conditions he will report to intelligence authorities every eight days and remain within Venezuela territory.

A1: Borrowing a play from Cuba’s propaganda strategy, the Maduro regime has claimed the blackout was caused by internal opposition leaders and the United States “using cybernetic and electromagnetic attacks.” These claims have been made without providing any evidence. However, according to Venezuelan power sector stakeholders and investigative reporting, the cause of this current power outage crisis has been attributed to the Maduro regime's incompetence, underinvestment, brain drain, and massive corruption.

Power outages in Venezuela have become common; Venezuelans have been experiencing days-long blackouts for years. The most recent nationwide power outage occurred in October 2018 and affected 16 of Venezuela’s 24 states. In 2017 alone, reports show there were more than 18,000 power outages throughout the country, with the most affected states being Zulia, Carabobo, Nueva Esparta, and Aragua. This is not the first time a Venezuelan regime has blamed an outside enemy for blackouts. In 2010, Maduro’s predecessor Hugo Chávez declared a state of emergency for the country’s electric system. In 2013, Maduro issued an order to militarize the power plants. In the former, Chavez blamed the capitalism modus vivendi. In the latter, Maduro blamed the opposition—only a few short days after he claimed victory in the contested 2013 presidential elections.

Today’s power outage has no precedent in terms of length and scope. Most cities remained with no electricity whatsoever for more than 90 hours. There is no official information on the cause or future recovery of the blackout, but investigative journalists from Caracas Chronicles have indicated that one of the power lines connected to the Simón Bolívar hydroelectric plant (the Guri dam), which supplies 80 percent of the nation’s electricity, went out and overloaded the other two remaining power lines. This not only caused an immediate power outage throughout most of the country but also triggered a “load rejection” on the water wheels of the dam, shutting the turbines off and leaving the national electric system completely broken.

Venezuela is one of the most corrupt countries in the world, currently ranking 168 out of 180 countries in Transparency International’s 2018 Corruption Index. In 2009, the Chávez administration invested about 5 billion dollars in increasing the electricity capacity. However, over time, the capacity goals were progressively reduced while the budget remained the same. With no check and lack of transparency, millions of dollars that should have been contributed to sustaining this vital resource were squandered. Looking ahead, rebuilding the electric system will take years and significant financial and human capital investment. Venezuela lacks both the infrastructure and the manpower to run an effective and efficient national power system, particularly given the recent exodus of thousands of skilled technicians and other workers. The international community, and in particular the private sector, will be indispensable in the effort to stabilize and rebuild Venezuela’s electric system.

Q2: What are the humanitarian and social implications of the blackouts?

A2: At least 21 people had died since the onset of the blackout last Thursday. The power cuts threaten the lives of many, such as patients with kidney failure who depend on daily dialysis. The oil industry has also been hit hard by the lack of power. Venezuela’s state-run oil firm PDVSA has been unable to export crude oil since last week. Flights in and out of Venezuela’s main airport, Maiquetia, have been drastically reduced. Many gas stations are not operating. Lootings, including of food stores and shopping malls, have become widespread.

Venezuela has also lost its telecommunication and internet capacity during the blackout. According to NetBlocks, an internet monitoring organization, 96 percent of the country’s telecommunications infrastructure went offline on Saturday; and the connectivity is back up to only 63 percent 119 hours after the original onset of the nationwide power outages. It is widely recognized that social media platforms are the main tools Venezuelans have to organize and communicate. Limiting Venezuelans’ access to these essential technological tools will only exacerbate the ongoing humanitarian crisis and struggle to restore democracy. 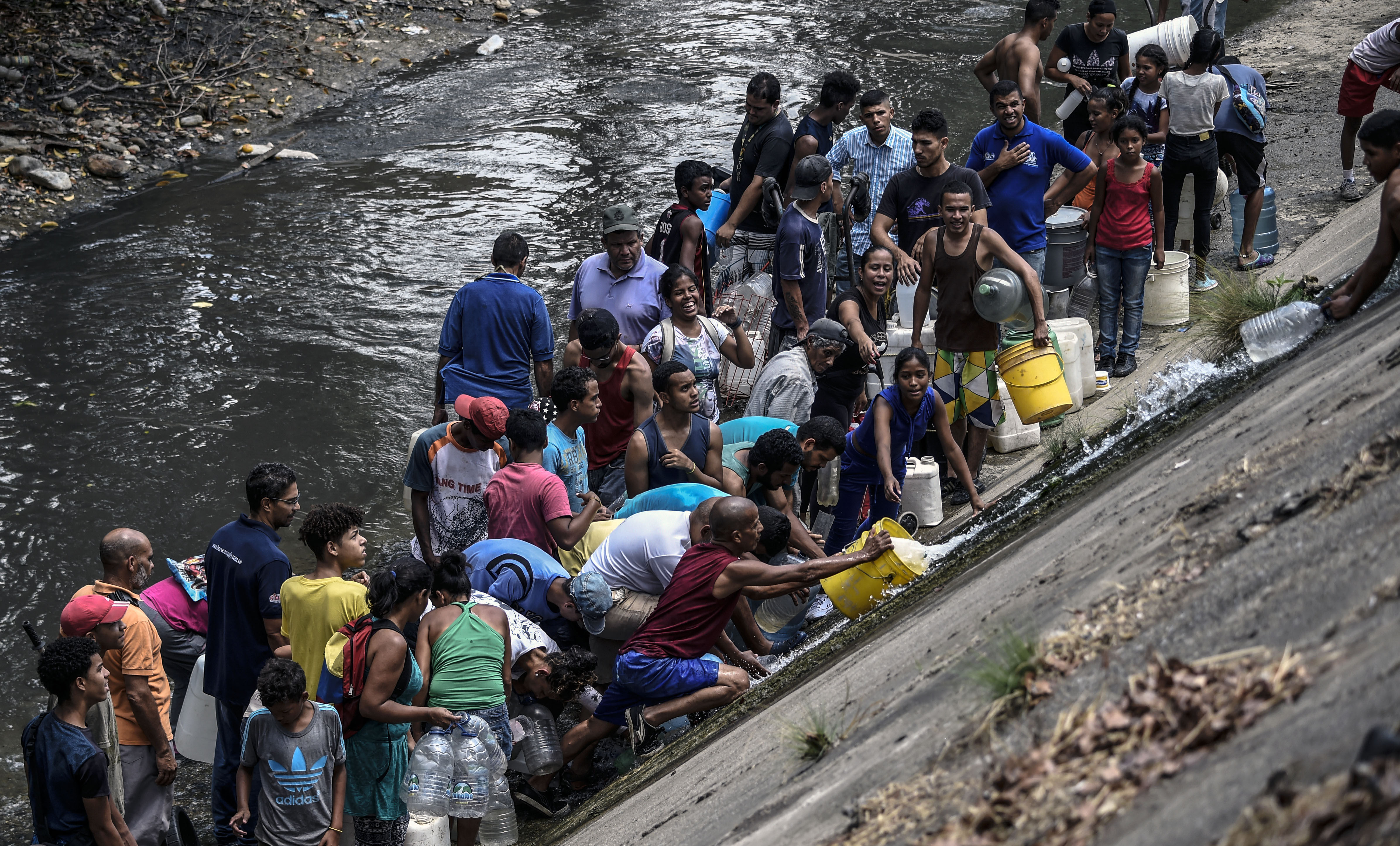 People collect water from a sewage canal at the river Guaire in Caracas on March 11, 2019, as a massive power outage continues affecting some areas of the country
Photo: JUAN BARRETO/AFP/Getty Images

Q3: What options are left to help Venezuelans restore democracy?

A3: Traditional diplomatic tools have proven to have little effect on Maduro’s kleptocratic mafia state. The rejection of humanitarian aid on February 23 proved once again that the Maduro regime not only does not care that its own people are starving but also is so desperate to cling to power that they are willing to commit crimes against humanity if necessary.

It is essential to remember that February 23 was the first time that it has openly been attempted to bring humanitarian aid into Venezuela since the current crisis started. This effort was made possible because of interim president Guaidó and the National Assembly—recognized as the only democratic-elected institution left in the country by more than 50 countries—requested aid support from the international community. While the planning, execution, and messaging to the Venezuelan people certainly need to be improved moving forward, continuing to try to provide the much-needed support of humanitarian aid should be the top priority for Venezuelans and the international community. Similarly, countries, such as Japan or Germany, can offer Guadió and the National Assembly technical help, perhaps by sending a special technical envoy to assess the power outage emergency.

It is important to reinforce that interim president Guaidó did not proclaim himself as president, as has been reported – Guaidó became president in line with articles 233, 333 and 350 of the Venezuelan Constitution.

Venezuela has not been a truly sovereign nation for years. The presence of Cuban state actors in multiple sectors in Venezuela, including in the intelligence, military, and property registration offices, violates the Venezuelan Constitution and international law. In the meantime, Cuba has received roughly 100,000 barrels per day of crude oil from Venezuela. The response by interim president Guaidó and the National Assembly came earlier this week when they issued a decree to cancel all future shipments of petroleum to Cuba. Guaidó has asked for the international community’s cooperation in ensuring this measure is effectively executed so that the oil can stay within Venezuela for its citizens who urgently need it to attend to this national emergency, rather than be given away. The United States and other countries should support Guaidó and the National Assembly’s calls to make sure no oil shipments reach Cuba’s shores.

It is important to reinforce that interim president Guaidó did not proclaim himself as president, as has been reported – Guaidó became president in line with articles 233, 333 and 350 of the Venezuelan Constitution.

Venezuela’s crisis threatens the security of other regional countries, particularly Perú, Ecuador, Brazil, and Colombia. Each day, more countries join the obvious narrative: Nicolás Maduro and his 20-year-old ruling regime is a threat to peace and security. The next major task for the region and the international community will be to determine how best to support Venezuelans in their effort to restore their democracy by non-violent policy solutions, particularly in the face of a mafia state involved in criminal activities. Supporting the only legitimate and democratically-elected institution left within the country, including Juan Guaidó and the National Assembly, may be the only peaceful path ahead.