Since the collapse of the Soviet Union in 1991, the Russian Federation’s interest in Latin America has steadily declined, except for two activity spikes in 2008 and 2014. Both were associated with the Russians’ need to distract attention from crises in Georgia and Ukraine. Otherwise, by traditional measures—trade and investment, diplomatic engagement, and arms sales—the trend lines all lead to a level of Russian involvement that is a tiny fraction compared to the rest of the globe. However, through a state-controlled Spanish television network and potential social media manipulation, Russia may have settled on a Potemkin-village public relations strategy in the region. Ironically, this may not be a strategy to influence Latin America at all, but rather one to reassure and remind Russians themselves of their country’s glory days as a world power. Alternately, Russia may be seeking to undermine democratic institutions themselves by sowing discord within and between allies. But without actual influence, virtual influence won’t be enough to achieve any of Russia’s hemispheric goals.

Russian trade in goods with Latin America is small, representing less than 2 percent of its entire trade with the world. Its biggest trading partner is Brazil, with total bilateral trade of just over $4 billion in 2016. It purchased about $1.7 billion of oil from Venezuela in 2016, but otherwise trade flows with other major Latin American companies are relatively tiny. Russia’s annual total trade in 2016 with Mexico was equal to the amount Mexico trades with the United States every 36 hours. 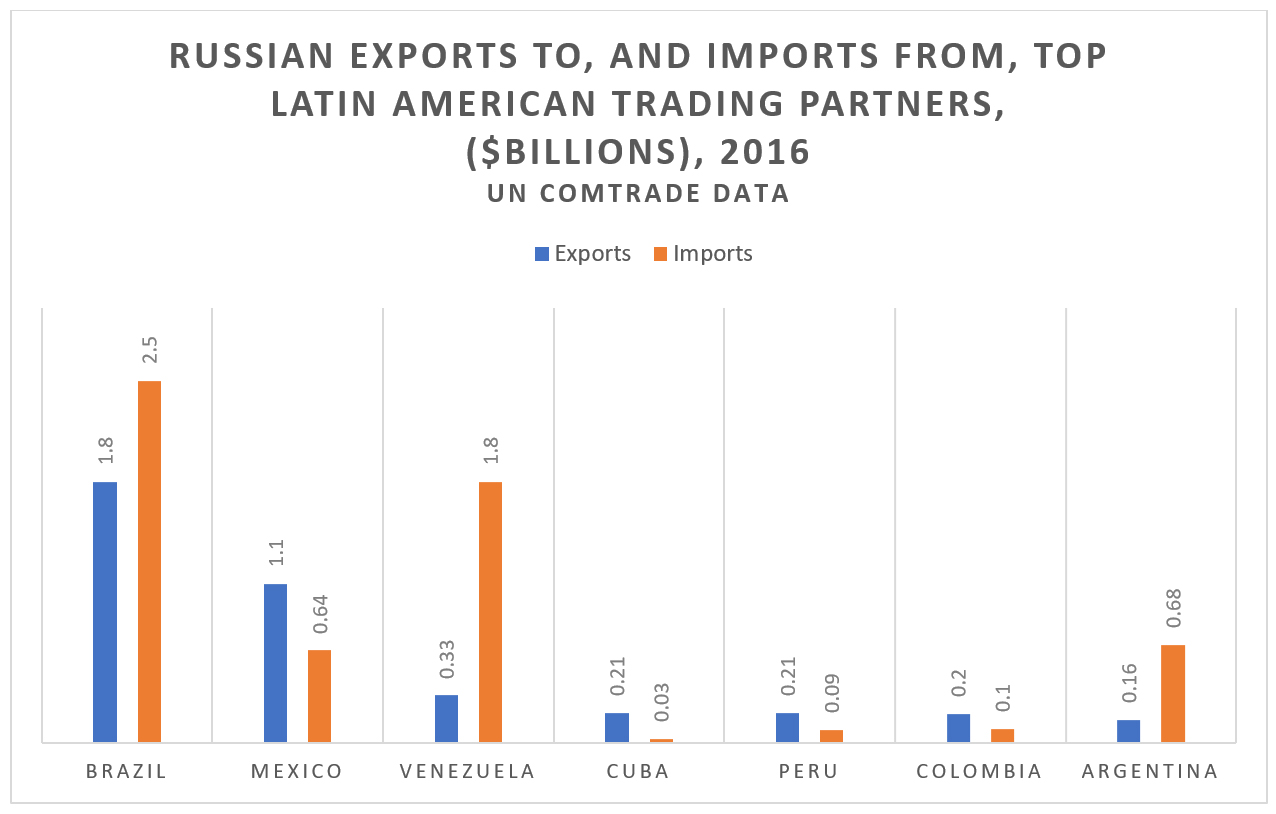 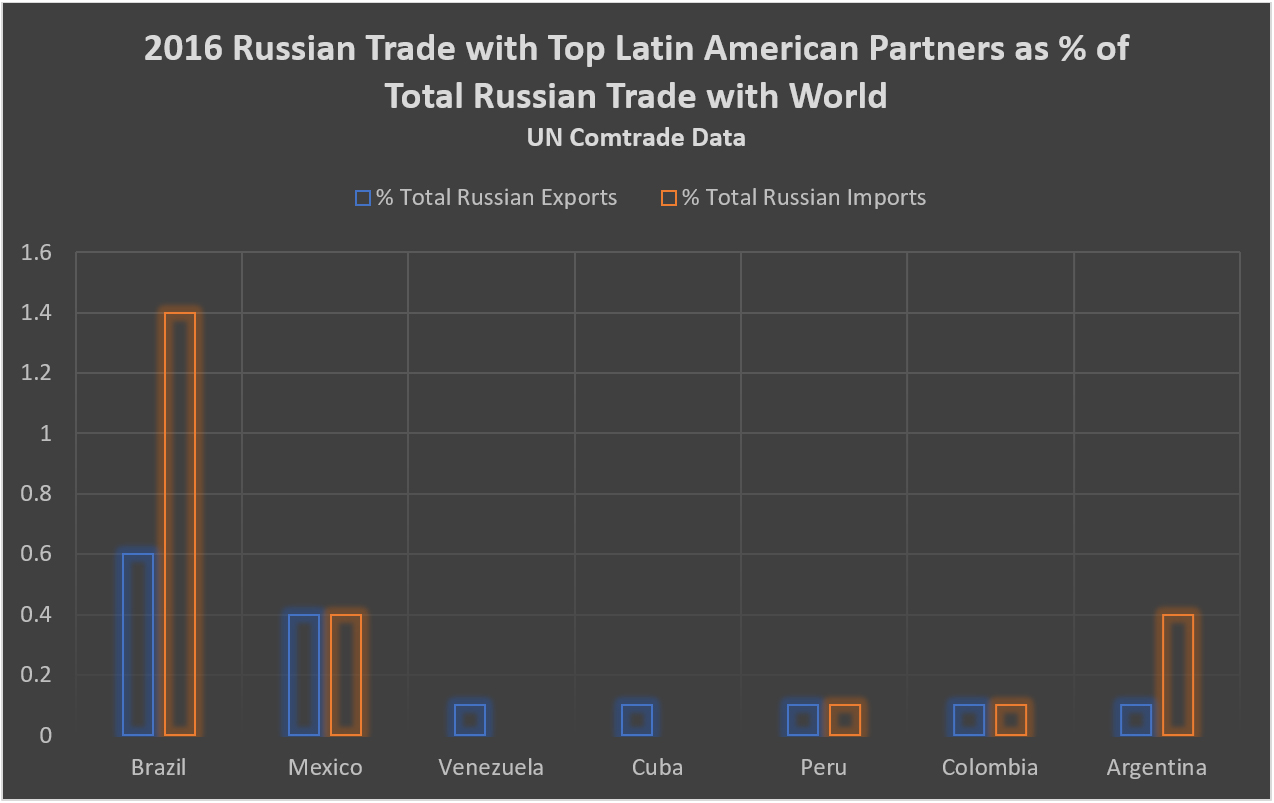 Although global foreign direct investment (FDI) flows to Latin America and the Caribbean declined in 2016, they still amounted to $167 billion, with Brazil being the largest recipient, grabbing almost half of foreign investment in the region. Russia, however, is mostly missing in action. The country’s direct investment in Latin America is so small, it’s hard to measure. While total FDI abroad by Russia in 2016 was over $27 billion, the amount invested in Latin America and the Caribbean was only $10 million, representing about 0.0004 percent of Russia’s worldwide total. Again, Brazil received most of the Russian investment (about $8 million), and Mexico got about $2 million. The most recent comprehensive UN report on FDI in the region devotes an entire chapter to “China’s growing influence” but makes no mention of Russia in Latin America whatsoever.

The only exception to the rule, sort of, comes in the form of Russian loans to Venezuela to prop up the country’s failing oil industry. Since 2015, Rosneft, the state-controlled Russian oil company, has loaned $10 billion to the Venezuelan oil sector, while taking a 49 percent stake in Citgo as partial collateral. (In 2013, Rosneft also bought a 45 percent stake in Brazil’s TNK-BP, as well as PetroRio’s 55 percent stake in the Solimões project.) However, since these are essentially prepayments secured by future oil deliveries, Rosneft’s largesse doesn’t count as true direct investment. Nevertheless, Washington lawmakers consider Rosneft’s stake in U.S.-based Citgo to be a risk to U.S. national security, especially if it falls into Rosneft’s hands.

A subset of Russia’s trade with Latin America is the sale of weapons. The vast majority, 73 percent, has gone to Venezuela. Between 1992 and 2017, arms sales to Latin America represented 4 percent of Russia’s arms sales to the world. There were, however, distinct spikes in 2007 (which included the sale of 100 combat aircraft to Venezuela) and 2013 (including 123 armored personnel carriers and surface-to-air missiles to Venezuela). Other recipients have included Mexico (60 transport helicopters over 25 years) and Peru (transport helicopters, aircrafts, and spare parts for MiG-29 fighters acquired from Belarus). With the rise of center-right governments in Brazil, Argentina, and Chile, arms deals with these countries fell apart. Sales to the region have fallen from $928 million in 2013 to zero in 2017. 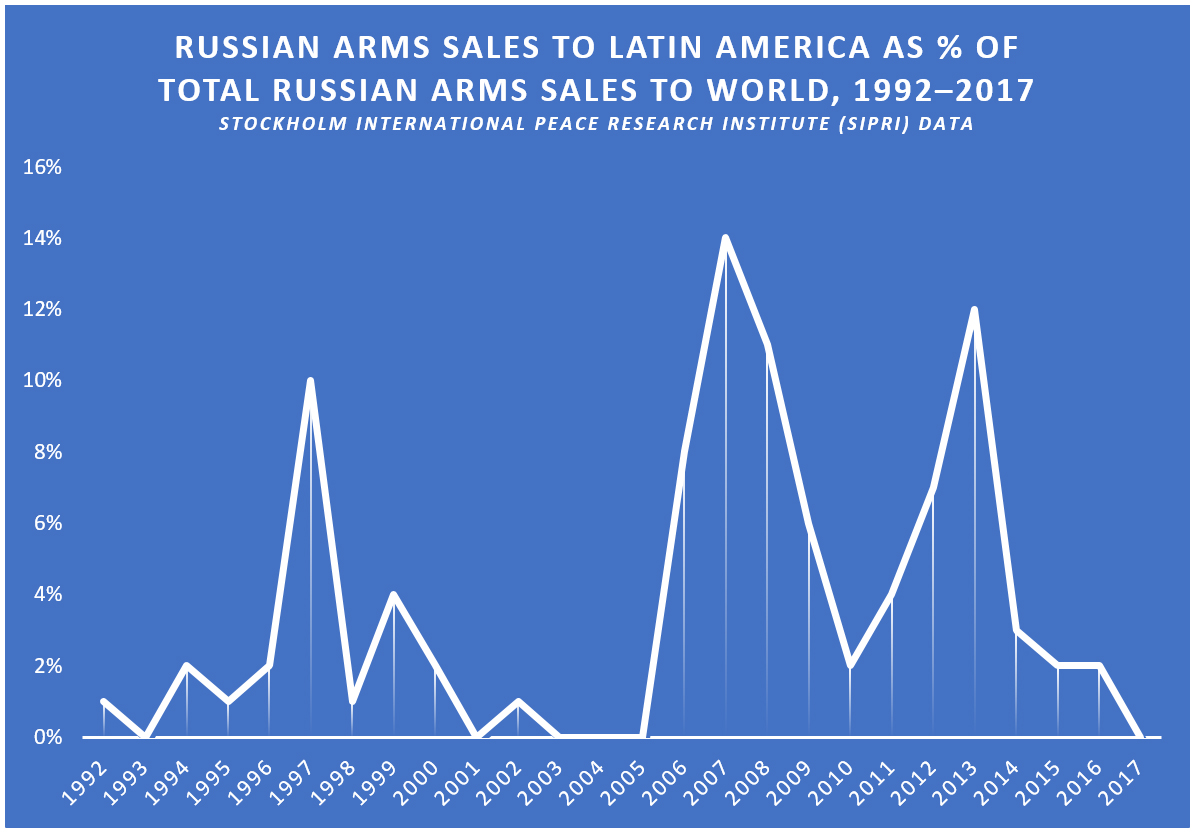 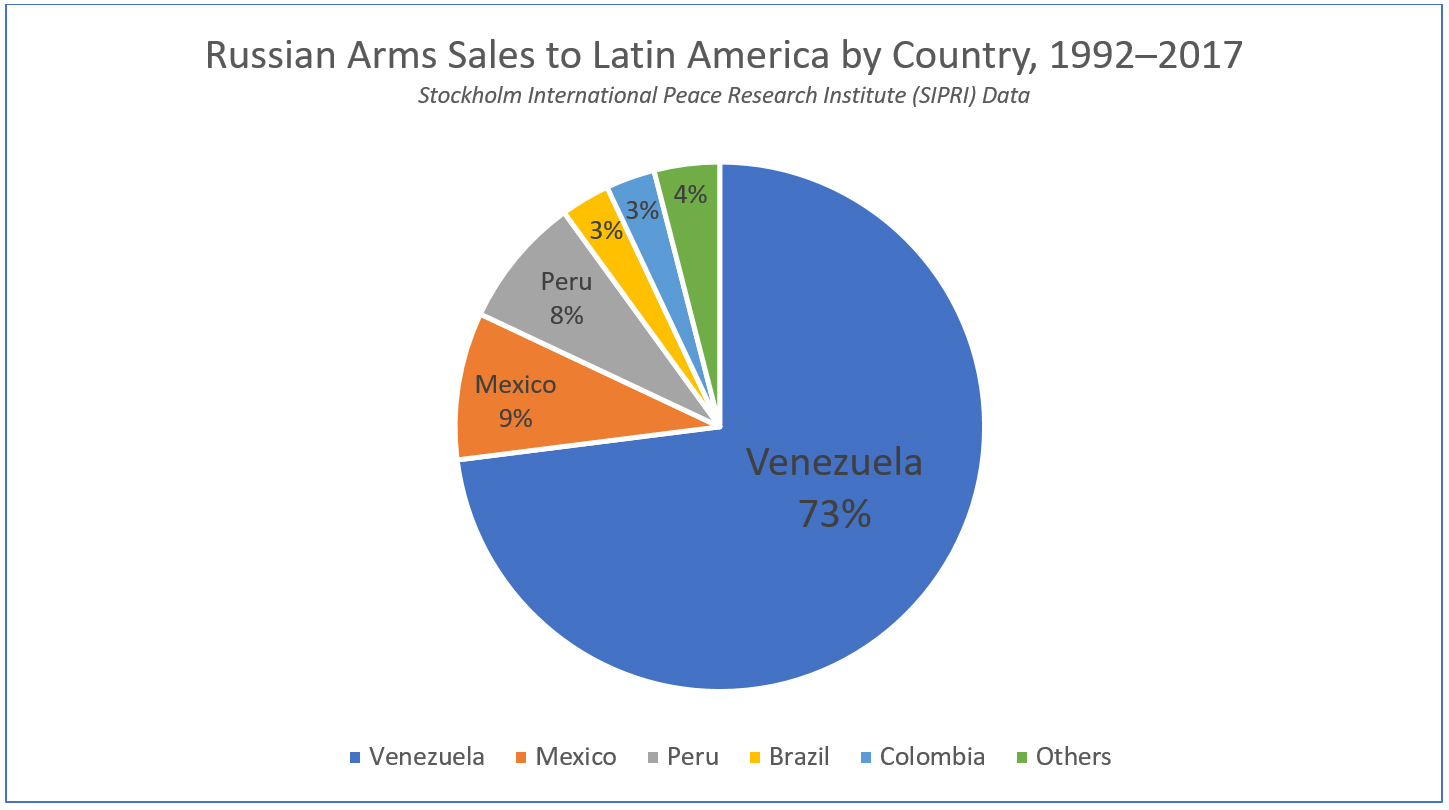 Russia’s diplomatic engagement with the region appears to be relatively more important than commercial or military interests. With 16 presidential visits and 26 ministerial-level visits since 2000 (over 2 high-level visits a year), the Latin American countries may be getting more attention than they deserve, given the paucity of Russia’s classic strategic interests in the area. Which nations get the most attention? Three countries—Cuba, Venezuela, and Nicaragua—have accounted for over half of Russia’s 43 high-level visits since 2000. Mexico has received only 2 visits, by Vladimir Putin in 2004 and 2012.

Venezuela, again, is different. Visits from senior Russian government officials have been augmented by many visits from Rosneft CEO Igor Sechin, who wields just as much if not more power and influence in Russia than many cabinet ministers. Sechin reportedly has developed close personal relationships with Venezuela’s political elite. 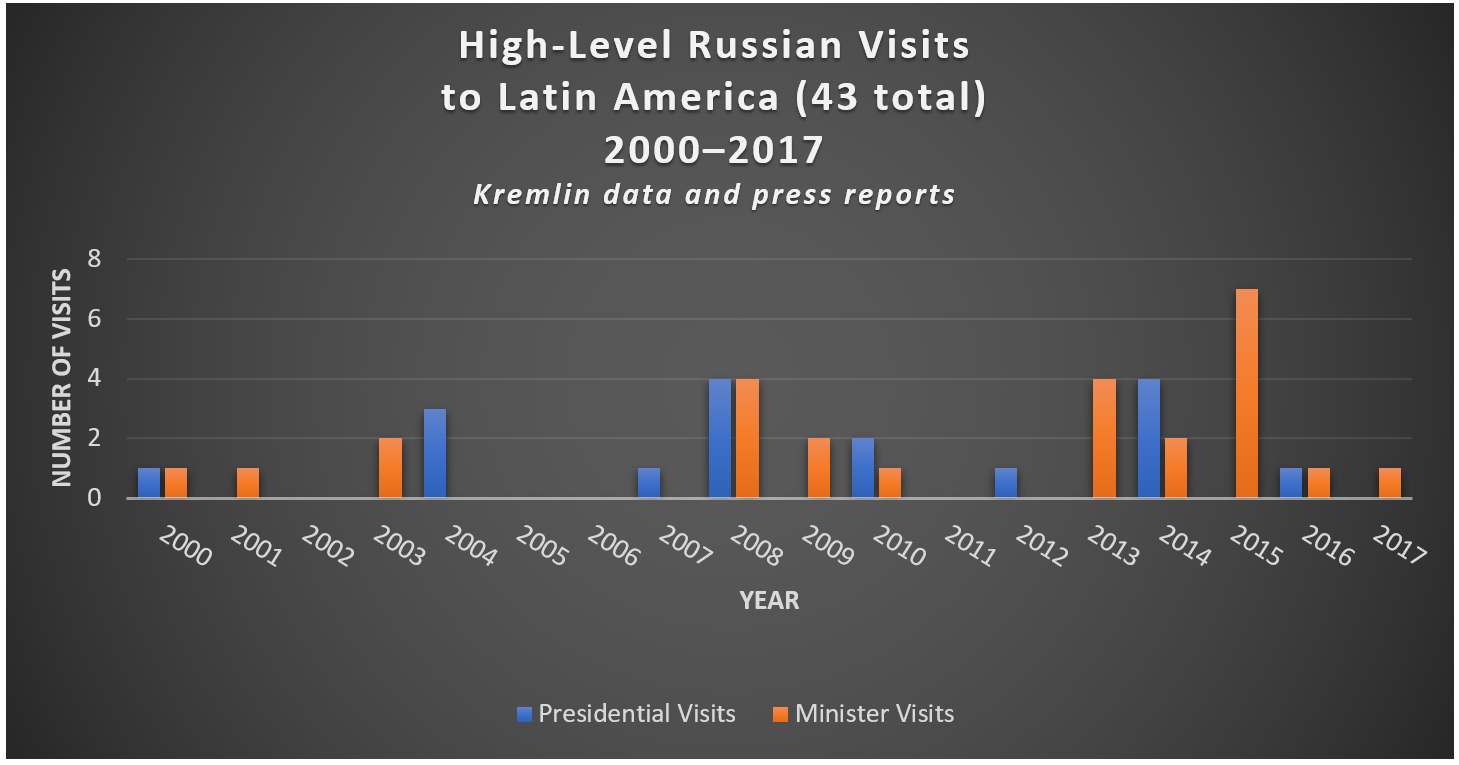 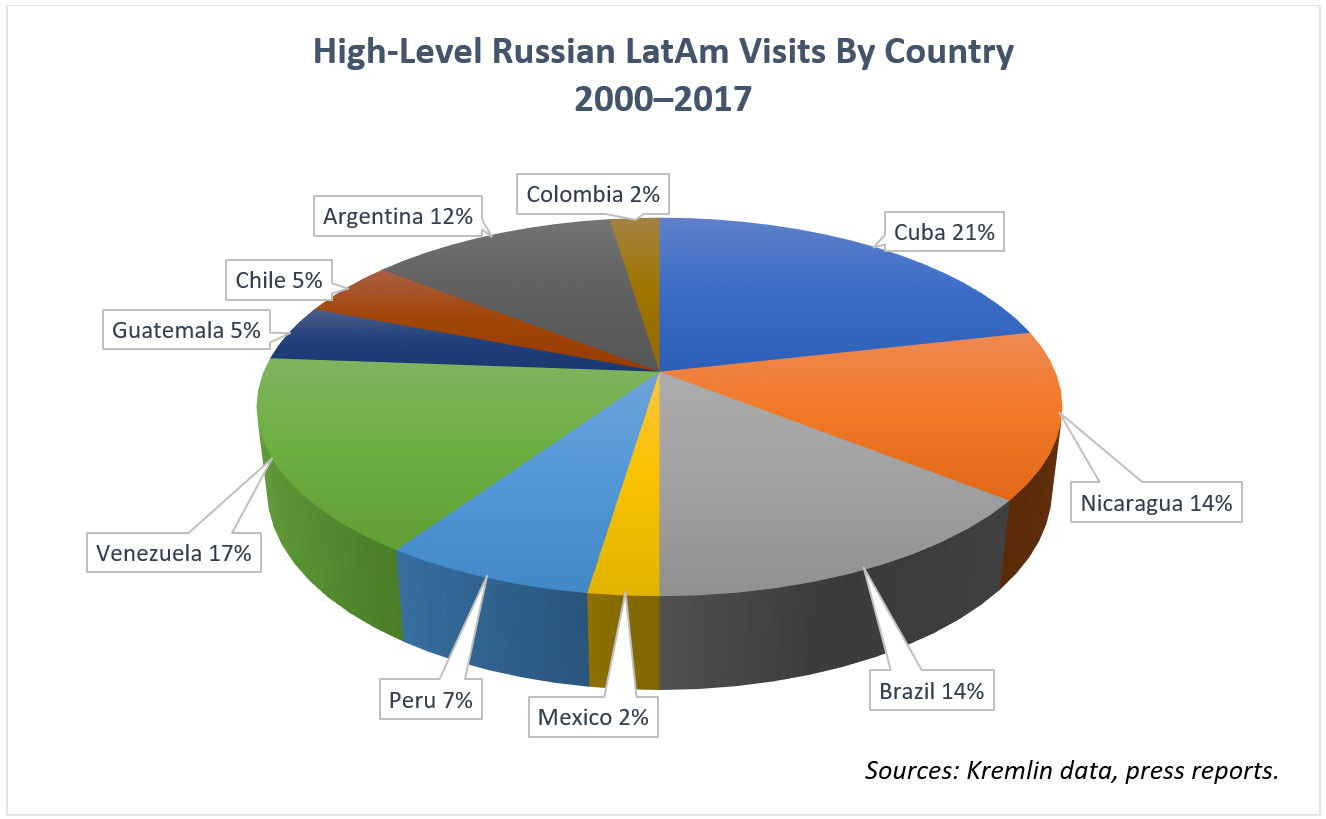 What Do the Russians Have in Mind?

With no significant commercial interests, tepid weapons sales, and half-hearted diplomatic engagement, Russia exhibits few signs of interest in Latin America. Nevertheless, there is evidence that Russia wants to wield influence in the region on the cheap, mostly to impress its own citizens. Through relatively inexpensive social media platforms, Russia can afford to tarnish and undermine democratic institutions. This nihilistic approach need not achieve a strategic Russian national interest. If it is enough to irritate the United States and cast doubt on the legitimacy of hemispheric elections, that’s good enough.

Meddling at the Ballot Box

The Russians have proven adept at using social media platforms to influence public opinion. In addition to documented efforts during the 2016 U.S. elections, it has been active in Europe and in one case used Latin America as a virtual base. During the October 2017 Catalan referendum, Russian Twitter “bots” were used to spread disinformation with content created by the TV network Russia Today (RT) and Sputnik News, both part of Russia’s propaganda machine. Around a third of the Twitter bot accounts spreading this content were traced to Venezuela, or they self-identified as pro-Chavista.

Within the region itself, many red flags have gone up. In January 2018, former U.S. national security adviser H.R. McMaster said that the United States had seen “a sophisticated effort to influence the ongoing Mexican presidential campaign.” According to press reports, Mexico’s National Electoral Institute (INE) has concluded that 65 percent of the visits to Mexico’s website for voters abroad came from computers located in St. Petersburg, Russia.

The effort may have backfired. Early reports that the Russians were attempting to help Andrés Manuel López Obrador (the leading Mexican presidential candidate) were mocked by López Obrador himself. In doing so, he effectively discredited the allegations, which have since disappeared. Some experts, such as David Salvo of the German Marshall Fund, believe that misses the point. Russia’s goal is not to change the tally in elections, but to raise doubts in the democratic process and the veracity of the vote itself.

In Brazil, where memories are fresh of the massive disinformation campaign spread on social media during the impeachment of former president Dilma Rousseff, the country also could be vulnerable to potential Russian meddling during its elections in October. As for Colombia, one former U.S. official reports the Russians are already spreading disinformation in the country. Colombia’s national voter registry has also become a target. It saw around 50,000 cyber attacks during the legislative elections held in April.

Russia analysts such as Vladimir Rouvinski believe Russia’s main interest in Latin America is its geographic proximity to the United States, that is, America’s “near abroad.” According to his analysis, Russia seeks to demonstrate to Washington policymakers and the Russian public that it can reciprocate U.S. “provocative” actions in the territory of the former Soviet Union. By nature, these types of Russian actions will be public or at least thinly veiled. There is some evidence that this strategy is working on a domestic political level. Due to frequent media coverage of diplomatic visits, or the dedication of joint memorials, the Russian public is much more aware of Latin America than a decade ago. As a result, Vladimir Putin would suffer politically if Russia “loses” Venezuela, which would be yet another humiliation of Russia on the world stage. Even an imploding Venezuela is considered by Russians to be a reliably supportive global ally, a nearly empty category for Russia.

Others, such as former U.S. defense official Frank Mora, think Russia has deeper and darker strategic aims. Its real goal is to undermine trust in Western democratic institutions by discrediting the politicians and the political process. In doing so, of course, Moscow is not creating the phenomena, but exploiting existing trends in public opinion. According to recent surveys in Latin America, support for democracy has declined significantly, especially in Mexico and Brazil, while an openness to authoritarian solutions has increased.

It would be naïve to think that Russia would not seize on these developments as opportunities to sow discord within and between the world’s democracies. But unlike China, Russia has failed to invest in deeper relationships in Latin America that last over time (with the exceptions of Cuba and Venezuela). Whether in commerce, security, or true diplomatic engagement, Russia wields almost zero real influence in the region and hasn’t for over two decades. Meanwhile, Russian social media victories—if they occur—may be disruptive in the short term, but ultimately they are as inconsequential as the average Tweet.