What Can Patent Data Reveal about U.S.-China Technology Competition?

This Critical Questions draws on an August 30 CSIS panel discussion “U.S. Technological Leadership and Patents: What Can the Data Tell Us?” A recording of the webinar, moderated by CSIS senior advisors Andrei Iancu and Kirti Gupta can be viewed here.

The United States and China are engaged in a strategic competition for global technological leadership. In seeking ways to gauge this competition, business leaders, policymakers, the media, and even the courts often turn to data on patent filings. Prudent use of this data requires a closer look at what the data can and cannot say.

While patent data is widely used as a metric of national competitiveness and innovation, it is important to be mindful that patents vary greatly in quality. The volume of patent applications can also be manipulated through government or firm incentives. And, of course, patents are only one measure of a country’s innovative capacity.

Understanding these limitations is important because where this data comes from and how this data is used affects perceptions of the current landscape of competition, and in turn, policies affecting support for critical technologies ranging from 5G communications and artificial intelligence to quantum information science and advanced semiconductors.

Q1: What does cross-national data reveal about patent applications?

A1: The World Intellectual Property Organization (WIPO) IP Statistics Data Center compiles decades of historical data on patent applications and grants at both the international and national levels. This information, which incorporates data on foreign patent filings, shows that patent applications filed and grants awarded by China’s National Intellectual Property Administration have been on a steady increase since 2000, with significant year-over-year increases beginning in the early 2010s.

Comparisons based on raw, aggregated patent data show that China has been the world’s leader in patent applications and grants for nearly a decade. When measuring numbers of patents granted for technologies of strategic significance, including semiconductors, computer technology, telecommunications, energy technology, and biotech, China appears to be the global leader or a peer of the United States. 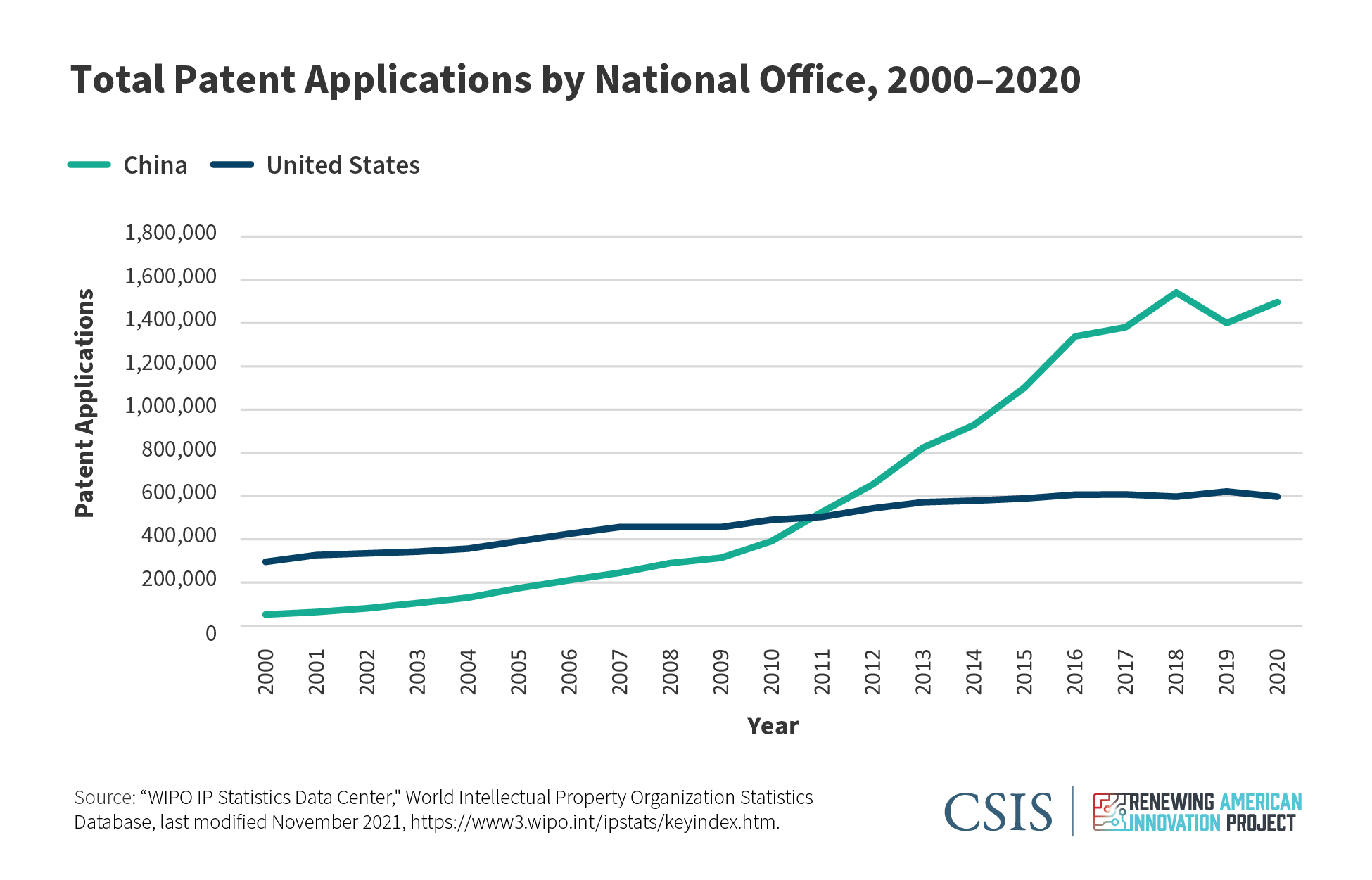 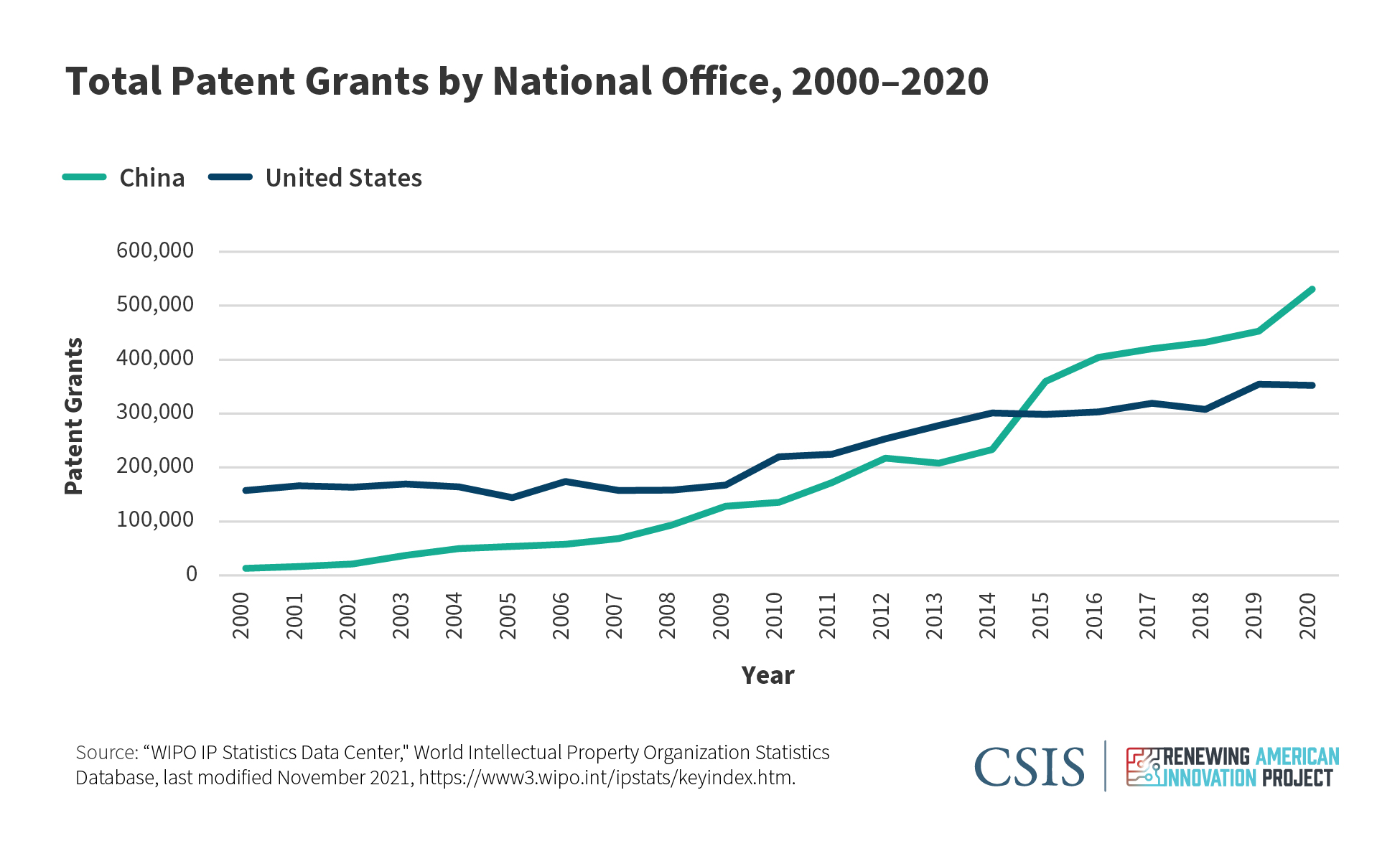 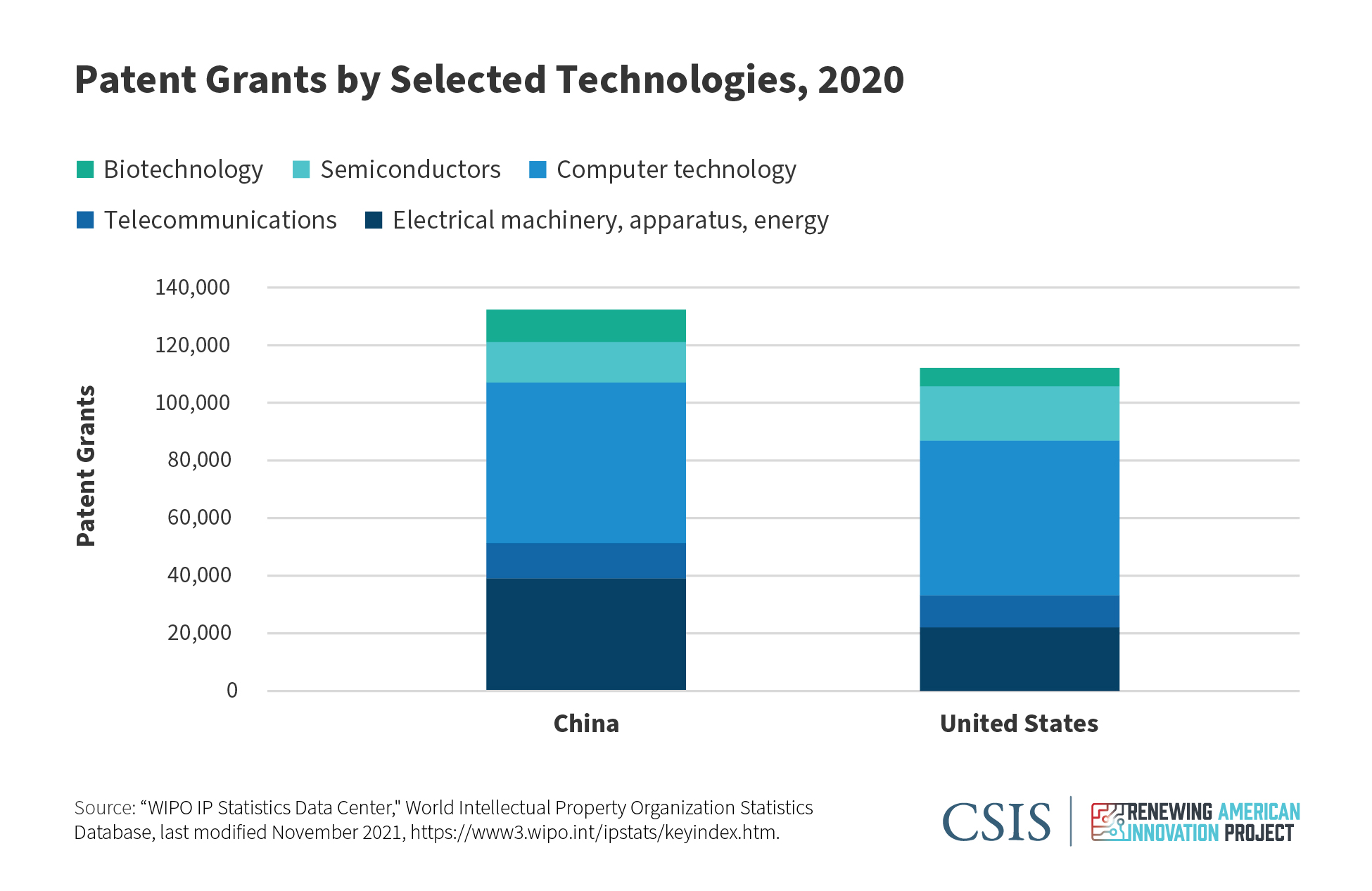 Q2: What does the data purport to show?

A2: By looking at relative global trends in patent filings, researchers and policymakers can gain some insight into where individual countries are focusing their efforts technologically and the speed with which they are transitioning toward a knowledge-based economy. Security analysts also examine changes in patent trajectories because cutting-edge technologies are often developed first for military usage. Large patent application numbers can also be loosely indicative of how attractive a country’s intellectual property laws are, as inventors are incentivized to file where the protection of their ideas is best safeguarded.

China’s increase in patent applications appears to echo its rapid industrialization. As China seeks to lead in a series of emerging technologies, many experts use patenting data to demonstrate the speed and trajectory of China’s technological progress.

Q3: What are the drawbacks of using patent data as a measure of competitiveness?

A3: Major news outlets routinely cite numbers of patent filings as a measure of competitiveness and these numbers should be read with caution.

First, patenting data by itself does not provide a full picture of the health of a nation’s innovation system. Innovation is the result of a network of collaborative actions of which patent filings and citations only capture one observable, if somewhat noisy “output.” Research and development (R&D) intensity, which measures R&D expenditures as a percentage of per capita GDP, is another static marker that shows relative national efforts to sustain innovation. Notably, the World Bank’s June 2022 data on this show the United States, Japan, South Korea, and most Western European nations greatly outperforming China in this regard. Other factors used for predicting a nation’s innovation potential include educational achievement, number of working-age adults, firm valuations, and royalty payments, which recoups the cost of R&D and reveals the value that the market has put on that innovation.

Second, relying on aggregate patent data can be misleading because some governments and firms manipulate data by creating incentives and targets to boost patent applications. Some researchers have pointed out that Chinese officials incentivize domestic patent filings, and that the resulting data is enhanced to meet policy or political targets. As evidence, they point to unusual trends of filings peaking at the end of a calendar year, which suggests that a quota is being achieved by firms breaking up their inventions to come up with more applications.

Third, simply counting patent applications can mix low-value and high-value patents—both those that support incremental innovations and those that support disruptive change. Acknowledging this point, a Chinese official in 2019 stated that only 10 percent of China’s patents have market value and that probably 90 percent of them are “trash.” This reality does not entirely discount measuring patents granted as a mark of national innovativeness, or even the state of the U.S.-China technological competition, but it does mean that doing so should necessarily handle conclusions based on raw patent data with caution.

Fourth, although patent data are one measure of innovation, in the sense that many companies disclose their inventions to safeguard their intellectual property, it is also worth bearing in mind that companies, in some cases, choose to keep these inventions secret.

The bottom line is that patent data should be used with care as a measure of national innovative capacity and competitiveness. Simply tallying the number of patented inventions and using this to declare a leader in whichever technology is applied can be misleading.