On the morning of October 1, President Trump signed into law H.R. 8337, the Continuing Appropriations Act, 2021 and Other Extensions Act. The bill funds the federal government through December 11 under a continuing resolution (CR) and extends several other federal programs. Below are five questions about the CR and its impact on the defense budget in FY 2021.

Q1: What does the continuing resolution include for defense?

A1: The CR included in H.R. 8337 extends funding for national defense at a rate based on the base budget and Overseas Contingency Operations (OCO) levels appropriated for FY 2020. However, the bill does not extend defense emergency funding for natural disaster relief or Covid-19 relief as passed in P.L. 116-136, the CARES Act, signed into law on March 27.

The Department of Defense (DoD) received $8 billion in emergency funds in FY 2020 to repair damage from natural disasters at military installations and an additional $10.5 billion under the CARES Act in response to the Covid-19 pandemic. The exclusion of this funding in the CR means that defense is funded through December 11 at an annualized rate of $738 billion.

Table 1 provides a comparison of defense funding in FY 2020 and the FY 2021 CR level. The CR level includes $666.5 billion in base funding on an annualized basis and $71.5 billion in OCO funding. These figures were originally set by the Bipartisan Budget Act of 2019, which adjusted the Budget Control Act budget caps for FY 2020 and FY 2021. The $666.5 billion in base funding under the CR falls below the FY 2021 budget cap of $671.5 billion, ensuring sequestration will not be triggered.

While H.R. 8337 does not extend Covid-19 relief funding in the CR, it rescinds and reappropriates the remaining balance of the $20 million appropriated under the CARES Act for the Defense Department’s Office of the Inspector General to provide oversight over DoD activities funded by the CARES Act.

Q2: What is the impact of the CR on defense programs?

A2: Under the strict rules of a CR, funding is extended for accounts and programs at a rate based on the funding levels appropriated in the prior fiscal year and the planned duration of the CR. This limitation means that funding levels cannot be adjusted for planned changes in a program. For example, programs that anticipated ramping up funding for certain activities are unable to do so, and programs planning to draw down are temporarily left with excess funds. Additionally, departments and agencies are prohibited from using funding under the CR for “new start” programs and programs that were not funded for production in FY 2020, cannot enter into any new long-term or multiyear contracts, and cannot increase production rates above the rates approved for FY 2020.

In practice, short-term CRs may not have a major impact on programs. However, long CRs can cause significant disruptions to the execution of programs, most notably acquisition programs, based on the factors above.

Congress may grant exceptions, known as “anomalies,” under a CR to allow certain activities. Ahead of the FY 2021 CR, the White House requested several anomalies for defense programs. Congress granted only one, allowing the Navy to enter into a contract and use incremental funding for the procurement of two Columbia-class submarines in FY 2021. The final CR did not authorize other requested anomalies, including the new start for the W93 warhead program, reallocation of funding for weapons activities in the National Nuclear Security Administration, and the transfer of funding from the Air Force to the Space Force as requested by the Trump administration (see Q4 for further discussion).

Q3: How does this CR compare to previous CRs during election years? 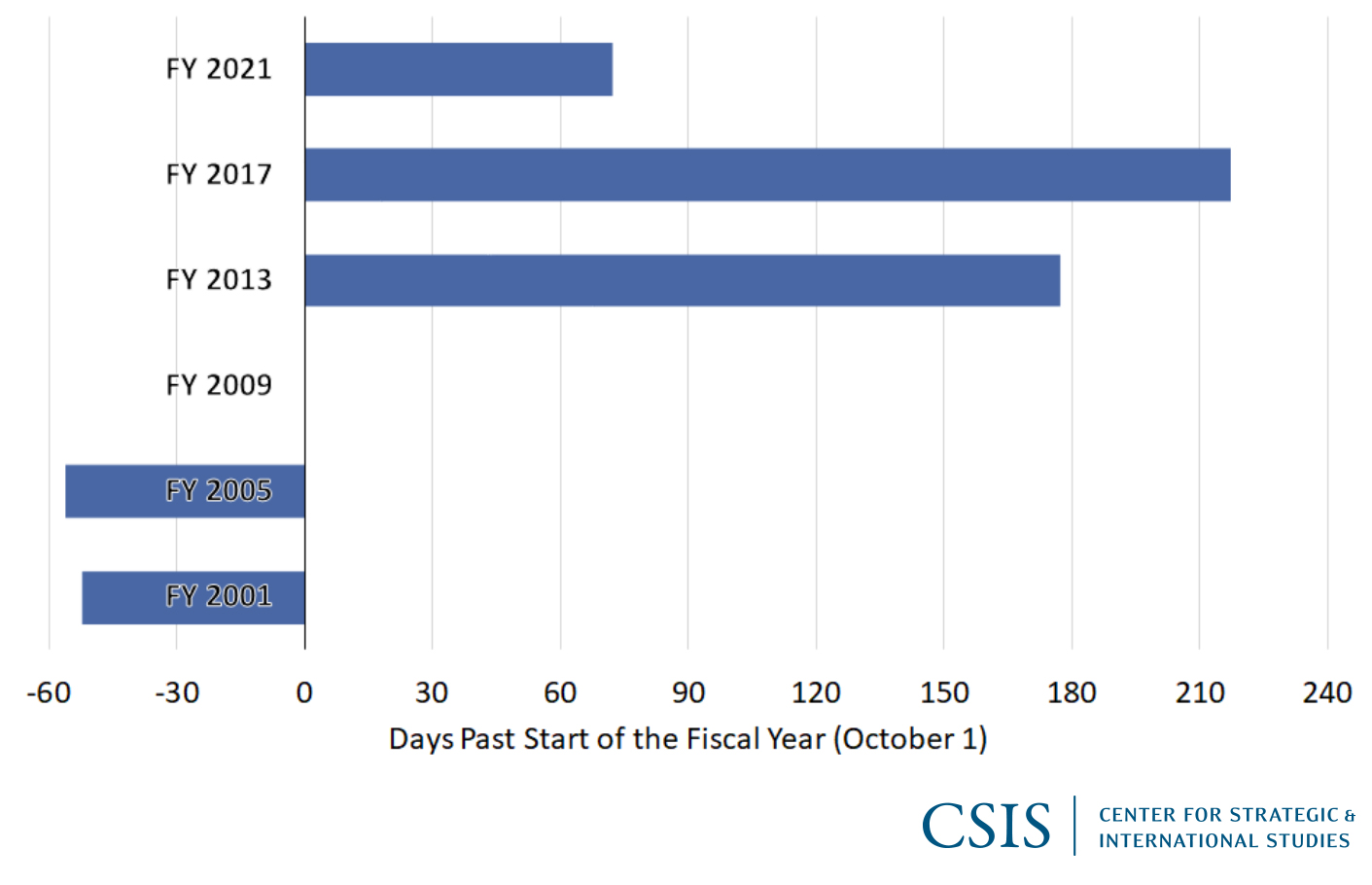 The 72-day CR under which the government is currently operating is 145 days shorter than the 217 days the government spent under three separate CRs during the 2016 election cycle. The FY 2017 CR, which lasted until May 5, 2017, is the longest since the start of the fiscal year shifted from July 1 to October 1 in 1976. During an election year, Congress may choose to punt on an appropriations bill if it anticipates that control of the White House or a legislative chamber may flip, thereby giving one party an advantage in budget negotiations. Depending on the outcome of the 2020 election, Congress could pass another CR in FY 2021 that extends until the new administration and legislature take office in January.

A4: This CR does not allow for independent funding of the Space Force outside of the Air Force. In a practical sense, this means that the Space Force will continue to be funded through Air Force accounts. It is still widely expected that in the final FY 2021 appropriations bill, Congress will transfer funding for the Space Force to separate accounts, which is necessary to give the service financial independence, something that its leaders feel it needs in order to continue establishing itself as a new service.

Budget independence from the Air Force was one of the driving factors for establishing the Space Force. For the Space Force’s credibility, an independent budget is a step toward solidifying and justifying the success of the new service.

As previously mentioned, the Trump administration made several defense-related anomaly requests in light of the CR, but only two for DoD. Separating the Space Force’s budget into separate accounts was one of them. While the Space Force is still able to function under a CR, when a full FY 2021 budget is passed and the service gains financial independence, there will likely be a bureaucratic mess to sort out the accounting of funds mid-year.

Q5: What space programs will be impacted by the continuing resolution?

A5: The Space Force has not yet committed to start many new programs in FY 2021. This means that the CR will minimally impact the service’s new program plans. Chief of Space Operations General Raymond, when speaking at the Air Force Association’s Virtual Air, Sea, Space and Cyber Conference, identified three issues with a CR: first, that the money for the Space Force would continue to be funneled through the Air Force (as discussed in Question 4, above); second, that no new programs will be able to start under a CR; and third, that existing programs could be impinged by a CR, including ongoing operations and maintenance or planned missions, such as those conducted by the X-37B space plane.

With a CR, many of the program increases the Space Force planned, as well as funding budgeted for building out more personnel and capacity within the new service, will not occur until the CR is replaced by regular appropriations. Programs that were expected to get increases in funding include those such as GPS III, Protected Tactical SATCOM, and Next Generation Overhead Persistent Infrared (OPIR). Notably, the Space Force’s only new start program, GPS III Operational Control Segment (OCX) Block 3F will not be able to start until a regular appropriations bill is passed. This program is planned to upgrade the command and control segment of the GPS III satellites and support DoD’s overall positioning, navigation, and timing (PNT) mission through increased capability.

Seamus P. Daniels is a research associate and program manager for Defense Budget Analysis in the International Security Program at the Center for Strategic and International Studies (CSIS) in Washington, D.C. Kaitlyn Johnson is an associate fellow and associate director with the CSIS Aerospace Security Project.

Space , Defense and Security , Defense Budget and Acquisition , and Defense Strategy and Capabilities