What Does the Trump Administration’s New Memorandum Mean for Nuclear-Powered Space Missions?

The Trump administration released a new presidential memorandum on August 20, 2019, that details its new policy on the “Launch of Spacecraft Containing Space Nuclear Systems.” From the title, some may assume this policy concerns the placement of nuclear weapons in space, which would violate the Outer Space Treaty, but in fact, it is a move to restructure how the U.S. government regulates and approves space-based nuclear power systems—particularly nuclear propulsion systems.

The new presidential memorandum updates guidance on the approval process for launching spacecraft with nuclear components or systems. The process used by the U.S. government to approve these launches was originally developed in 1977 and minimally updated in 1995 and 1996. Along with several reporting requirements, the updated policy creates a new review system for the authorization of the launch of spacecraft with nuclear components.

Q1: What is nuclear technology used for in space?

A1: Nuclear technology can serve three purposes on a spacecraft: propulsion, power, and heat. Many National Aeronautics and Space Administration (NASA) missions that utilize nuclear technology use radioisotope thermoelectric generators (RTGs) to provide electrical power and warmth for a spacecraft. RTGs provide electrical power by converting the heat energy generated by the decay of plutonium-238 into electricity using a thermocouple. Excess heat produced by RTGs can also be used to protect sensitive electronics or scientific instruments that would be damaged by the cold vacuum of space. This technology is especially useful for deep space missions because solar arrays become less effective at producing power as their distance from the sun increases.

Although NASA has been interested in using nuclear technology to aid spacecraft propulsion since 1961, budget cuts and a lack of political will have historically kept concepts for nuclear propulsion on the ground. However, NASA’s fiscal year 2019 budget included $100 million for nuclear thermal propulsion research, allowing for a flight demonstration mission by 2024.

Q2: What is the new approval system?

A2: Through this memorandum, the Trump administration is reshaping the approval process to a three-tiered system. The tiers are based on the “characteristics of the system, the level of potential hazard, and national security considerations.” Primarily, the tiers are separated by total quantities of radioactive material based on the A2 value listed in Table 2 of the International Atomic Energy Agency’s (IAEA) Specific Safety Requirements and on the probability of radiation exposure to the public.

The first tier includes spacecraft that have total radioactive material, which is less than or equal to 100,000 times the IAEA’s A2 value.

For federal government missions in Tier I, the head of the sponsoring agency is responsible for authorizing the launch, making sure the spacecraft complies with specified environmental policy, and ensuring that a Safety Analysis Report (SAR) for the mission is prepared. For example, if NASA is launching a new deep space probe, such as Juno in 2011, the NASA Administrator is responsible for ensuring the environmental standards are upheld for launch and then give launch approval.

For non-government missions, the Secretary of the Department of Transportation will be responsible for ensuring that environmental policy is followed and, if necessary, will require that a SAR is prepared and reviewed by other relevant government agencies.

The second tier evaluates spacecraft containing radioactive materials that are more than 100,000 times the previously referenced A2 value or where the associated safety analyses determine the probability of an accident during launch or subsequent operations, including re-entry of a spacecraft, that may result in public exposure of 5 to 25 Roentgen equivalent man (rem) total effective dose (TED) is equal to or greater than 1 in 1,000,000. This dosage level is roughly equivalent to 5 to 25 abdomen CT scans. Also included in Tier II are certain spacecraft containing nuclear fission systems comprised of low-enriched uranium.

By February 2020, the NASA Administrator must establish an Interagency Nuclear Safety Review Board (INSRB) to evaluate all federal government-sponsored Tier II and Tier III launches. The INSRB will provide a Safety Evaluation Report to the head of the sponsoring government agency to inform their decision making for Tier II missions. For non-government missions, the Secretary of Transportation will consult with heads of the relevant agencies to review the SAR and can request an INSRB review if deemed necessary.

The most limiting restrictions are associated with Tier III missions where safety analyses determine that the probability of an accident during launch or subsequent operations of a spacecraft that may result in public exposure of more than 25 rem TED is equal to or greater than 1 in 1,000,000. Tier III also includes certain spacecraft containing nuclear fission systems that utilize any other nuclear fuel other than low-enriched uranium. This is due to concerns for national security and nuclear nonproliferation.

For Tier III systems, the launch authority is held by the President of the United States. For launches sponsored by the Department of Defense or the Intelligence Community, the head of the sponsoring agency will request the President’s approval to launch. To do so, the agencies will coordinate through the Assistant to the President for National Security Affairs.

For other federal agencies, the head of agency sponsoring the launch will request the President’s authorization through the Director of the Office of Science and Technology Policy (OSTP). The Director of OSTP can authorize launches on behalf of the President but also holds the authority to bring cases before the President for decision.

Similar to Tier I and II, Tier III must go through a SAR process and adhere to environmental policies. These reports, along with a full INSRB review, will be brought to the President or Director of OSTP to inform the authorization decision. Non-governmental Tier III launches are to follow the same processes as those in Tier II.

Q3: Does this memorandum indicate that the United States will violate the Outer Space Treaty?

A3: No. The treaty on Principles Governing the Activities of States in the Exploration and Use of Outer Space, including the Moon and Other Celestial Bodies (better known as the Outer Space Treaty) declares that “States shall not place nuclear weapons or other weapons of mass destruction in orbit or on celestial bodies or station them in outer space in any other manner.” This language does not prohibit nuclear propulsion and other nuclear-powered systems on spacecraft, and such systems have been used on spacecraft in the past by multiple nations.

A4: Prior to this memo, the United States’ procedure for approving the launch of space nuclear systems provided only a single, and perhaps cumbersome, avenue for approval that was developed in 1977.

The original procedure required that for any nuclear-powered spacecraft a Nuclear Safety Review Panel, comprised of members from the Department of Defense, Department of Energy, and NASA, draft a nuclear safety evaluation report evaluating the environmental impact of the system. After the report was prepared, the head of the agency sponsoring the launch would request the President’s approval for flight. These requests were to be directed through OSTP. OSTP held approval authority on behalf of the President unless the director considered it advisable to forward the matter to the President for decision. This process is unchanged for Tier III launches by federal agencies except for the Department of Defense and the Intelligence Community. The main change in the policy is to create new processes for lower-risk missions (Tier I and Tier II) that do not require presidential approval.

A5: Beginning with the launch of an experimental navigation satellite known as Transit IV-A, in 1961, the United States government has placed 29 nuclear spacecraft into orbit. Nearly three-quarters of these spacecraft were launched prior to the 1980s, and only a single nuclear-powered spacecraft, NASA’s Curiosity rover, has flown in the last decade. 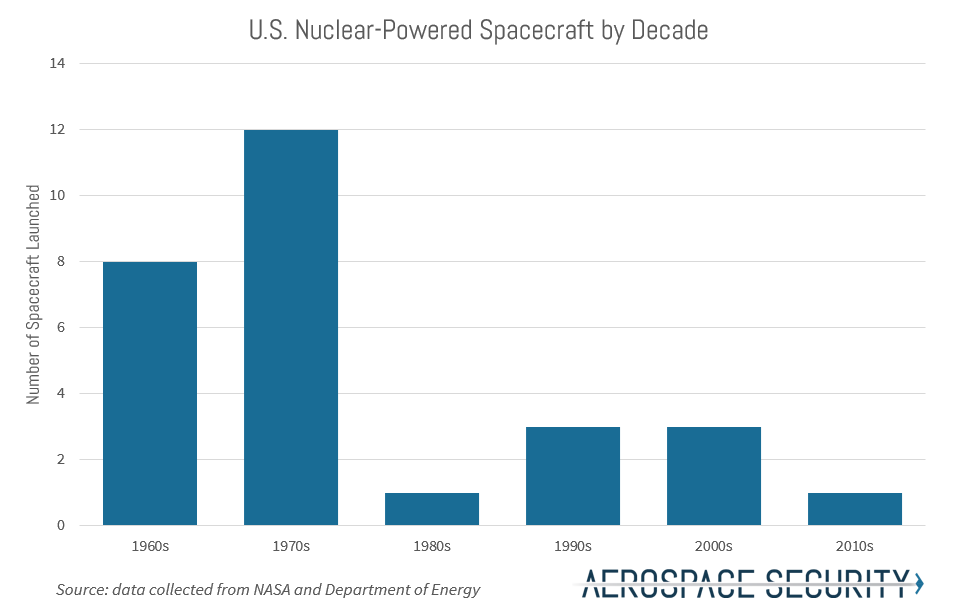 Despite its infrequent use, NASA has big plans for nuclear power in space. NASA’s Mars 2020 rover will use a radioisotope thermoelectric generator to power its mission on the red planet. Additionally, NASA plans to use an RTG to charge the battery of Dragonfly, a semi-autonomous rotorcraft that will explore the surface of Saturn’s planet-like moon, Titan. Lastly, NASA has been developing a small nuclear fission reactor to power long-duration stays on planetary surfaces. The reactor has passed several ground tests in the last few years and may be ready for tests in orbit as soon as 2022. 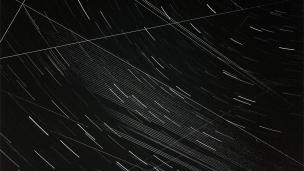 Russia Threatens to Target Commercial Satellites
By Kari A. Bingen, Kaitlyn Johnson
November 10, 2022
In the News

Artemis Launch Is a Step Back to the Moon, But a Leap Into a New Tracking Domain
Defense One | Jaqueline Feldscher
August 26, 2022
In the News

Humans Are Revisiting the Moon—and the Rules of Spacefaring
WIRED | Ramin Skibba
August 25, 2022
In the News