What Was Under the Climate Summit Christmas Tree?

Each year the United Nations Conference of Parties (COP) meets to advance global cooperation to address the many global challenges related to climate change. As per usual, at the summit that took place at the end of 2018 (COP24), the parties to the agreement nearly ran out of time to reach a final agreement but managed to yield an important outcome in the end.

The outcome was a rulebook for how countries will live up to their commitments under the 2015 Paris Climate Agreement. Also, in line with tradition, these annual meetings are accompanied by announcements and pledges to round out the offerings of government climate action with that of civil society, investors, companies, and smaller subsets of government actors.

We have attempted to collect some of the side offerings, initiatives, and announcements that occurred shortly before or during the two weeks of meetings. We leave it to you to assess the ambitions, viability, utility, or significance of these actions and merely point out that they are symbols of political, corporate, or societal will to take action on this important issue. Taken together, over time, it is part of the patchwork of activities, actions, and sentiment that have given rise to greater awareness and recognition of the challenges we face.

The declaration is in line with Polish president’s opening plenary speech, in which he stated, “there is no plan today to fully give up on coal” and emphasized the need for a just transition of workers in fossil fuel jobs. The job discussion is a key aspect in the transition to a low-carbon future; coal miners are often used as an example of the social impacts of moving away from fossil fuels.

Senegal will increase its renewable energy sources in installed electricity generation capacity to 30 percent by 2019.

Both Melbourne and Sydney have a target of 100 percent renewable energy. Sydney has also set a net-zero carbon building target by 2050. Melbourne has two more energy-related initiatives: zero-emissions buildings and precincts, zero-emission transportation.

The Scottish government joined to continue support for global efforts. Scotland’s last coal power station closed in 2016, and any new coal application must have carbon capture and storage technology.

Scottish Power is shifting from fossil fuel generation to wind power, which was announced in October 2018.

The United States Needs an Energy Industrial Strategy, and Everybody Knows It
By Sarah Ladislaw
May 5, 2020
In the News 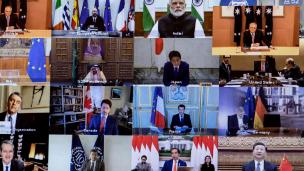 The G20 Agreement the World Needs Now
By Sarah Ladislaw
April 8, 2020
View all content by this expert