In early May, Henry Hub, the U.S. natural gas benchmark price, rose above its counterparts in Europe and Asia, making U.S. gas the most expensive in the world. That was unexpected and most likely short lived—there is no reason for U.S. gas to trade at a premium for too long. But the big and sustained disparities between regions that have defined global gas over the past decade may be over. Low oil prices, a prolonged supply overhang, and a market bearishness that Covid-19 has amplified could keep prices low and near each other for the foreseeable future. Price spreads have been a major driver of global gas markets for over a decade; what does the world look like without them?

From Divergence to Convergence

Gas prices have never been the same across regions, but until the 2010s, the gap between them was modest. Two things changed that: the United States started to produce a lot of gas, and hence its price dropped; and oil prices stayed high, which means that Asian liquefied natural gas (LNG) prices, which are still linked to oil, never fell. In 2012, after the Fukushima accident, Japan was paying eight times more for its gas than the United States was. This was a sharp reversal from earlier times: Henry Hub spent much of the early 2000s at a premium to the Japanese import price, and it was only in 2010 that it moved to a sustained discount against the National Balancing Point (NBP) price in the United Kingdom, then Europe’s main hub. 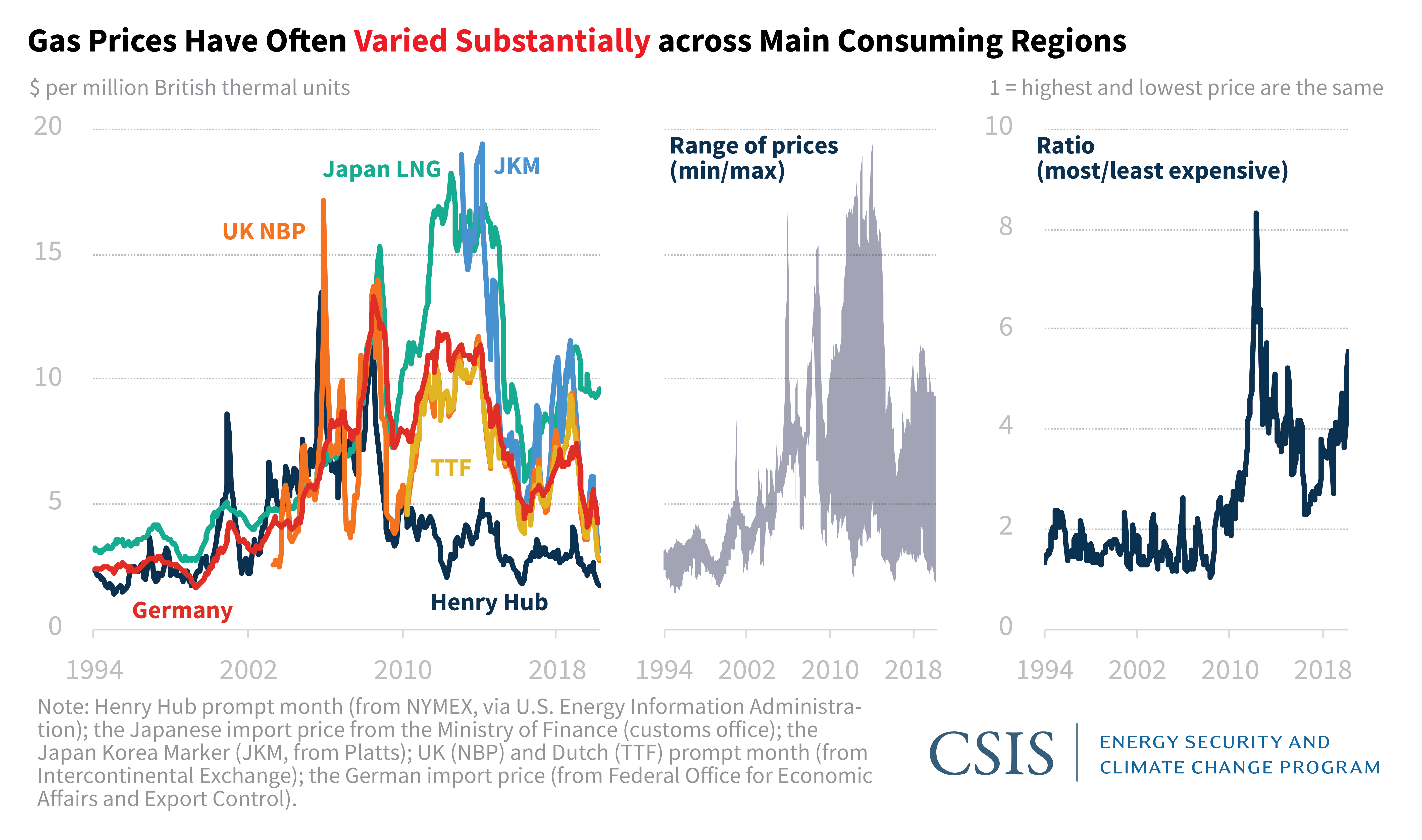 The convergence in prices is the result of three forces. First, LNG supply has jumped by over 40 percent in the last five years, while LNG demand has been relatively weak, struggling to absorb this excess production. Spot prices in Europe and Asia have been declining since late 2018, despite the occasional seasonal bump (in the winter of 2019-2020). European storage, which has acted as a destination of last resort, is fuller than normal. Even before Covid-19, analysts thought that production might have to be shut in during the summer due to insufficient demand and an inability to find storage for the excess gas. Market fundamentals were already weak, and a big investment surge in 2019 compounded a fear that the overhang in the market might last for years.

Second, Covid-19 weakened demand further. First came a fear about China’s gas demand, then India’s, then everyone’s. As countries shut down, gas usage declined, the extent varying by country and sector. But the bottom line was clear: at a time when there was excess gas in the market looking for a place to go, demand quickly evaporated. Whatever support one might have expected below gas prices went away.

Third, oil prices fell, which means that oil-indexed prices in Asia will fall soon as well. The fall in oil prices also meant that U.S. oil production was going to decline, and with it, so would associated gas supply (gas produced alongside oil). Less gas meant higher gas prices in the United States. Henry Hub, which was subdued in early 2020 and trading near record lows suddenly jumped, up 37 percent in just a month. And so just as spot prices in Asia and Europe reflected weak fundamentals, there was a mini-rally that pushed U.S. gas up, courtesy of an expected decline in U.S. gas production.

A World without Spreads

What does this new price environment mean? First, it weakens the relative position of the United States as an exporter. Over the past decade, the case for U.S. exports has rested on cheap gas at home and expensive gas overseas. Gas is still cheap at home, but it is no longer expensive overseas. If that situation persists, it is hard to see many companies rushing to build new facilities for export. The existing projects will still flow, although exports will be curtailed when the price differential is low (as it is today). Curtailed exports are a feature, not a bug, and companies appreciate the flexibility inherent in U.S. LNG contracts. But protracted shutdowns will also pose challenges for companies with thinner balance sheets.

Second, in a world where gas prices are similar across different regions, it makes more sense to prioritize domestic consumption or regional trade. In North America, this could mean favoring pipeline exports to Mexico, LNG to South America, or gas demand at home. For Europe, it means reliance on its immediate periphery, chiefly Russia, and the Middle East. Asia might no longer act as a magnet for LNG from across the world. Australia, Egypt, Argentina—exporting countries that are also big consumers might channel more gas at home if export prices are low. Without big price differences across regions, LNG becomes less global—more regional and local.

Third, these low prices open up opportunities, especially if gas can beat coal in Asia. Of course, these prices may not sustainable in the long term, at least absent a step change in the cost of producing gas (or a spike in oil prices that would make associated gas cheaper). But one hurdle for gas consumers has always been the sticker shock associated with LNG—why pay $8 or $9 per million British thermal units when prices in the United States are just $2 or $3 (even if, in practice, comparing LNG in Asia to U.S. gas prices was a purely theoretical exercise). If some customers believed that these low prices might stay for 5 or 10 years, they could bet on gas, a switch that would be good for consumers (and the climate) but bad for producers, especially of the more expensive kind.

Will this price environment last? Sooner or later, European and Asian prices should revert back to a premium vis-à-vis the United States. But prices may not revert back to where they were this last decade. Lower oil prices, an LNG supply overhang, and bearishness that has gotten worse due to Covid-19 means low, undifferentiated prices might be the new normal. We have anticipated a world without big price differences, but we are not sure what exactly it entails—except that it could spark some gas demand, but not too much since many consumers remain price sensitive. The next few months will push us into a world we have been forecasting for a long time but whose details and dynamics we have yet to see in practice.

Nikos Tsafos is a senior fellow of the Energy Security and Climate Change Program at the Center for Strategic and International Studies in Washington, DC.