Who Needs a Gas OPEC?

Covid-19 tested natural gas markets like no crisis before. Hub prices in North America, Europe, and Asia reached record lows. Storage facilities finished the summer season almost full. If a moment could bring the world’s major producers together to coordinate a cut in output, this would be it. But no—markets adjusted without supervision. The process was painful and, in some ways, unusual. Some producers cut a lot, others not at all. Prices went low and stayed there. But the system was flexible—it did not break. This experience shows that the hurdles to cartelization remain, and that Qatar, in particular, is unwilling to cede any ground to its rivals.

How Did Gas Markets Adjust to Covid-19?

Gas prices had been losing ground since late 2018, and Covid-19 just forced them lower this summer. In the United States, Henry Hub fell to a point not seen since the mid-1990s. In the Netherlands, prices were 60 percent lower than the previous low. The Japan Korea Marker had rarely traded below $4 per million British thermal units (MMBtu) before 2020; this year, it spent over two months near $2 per MMBtu. In normal times, low prices would trigger a response—power plants or factories would use more gas. But the economic downturn put a limit on this process. It was supply, not demand, that mostly balanced the market. 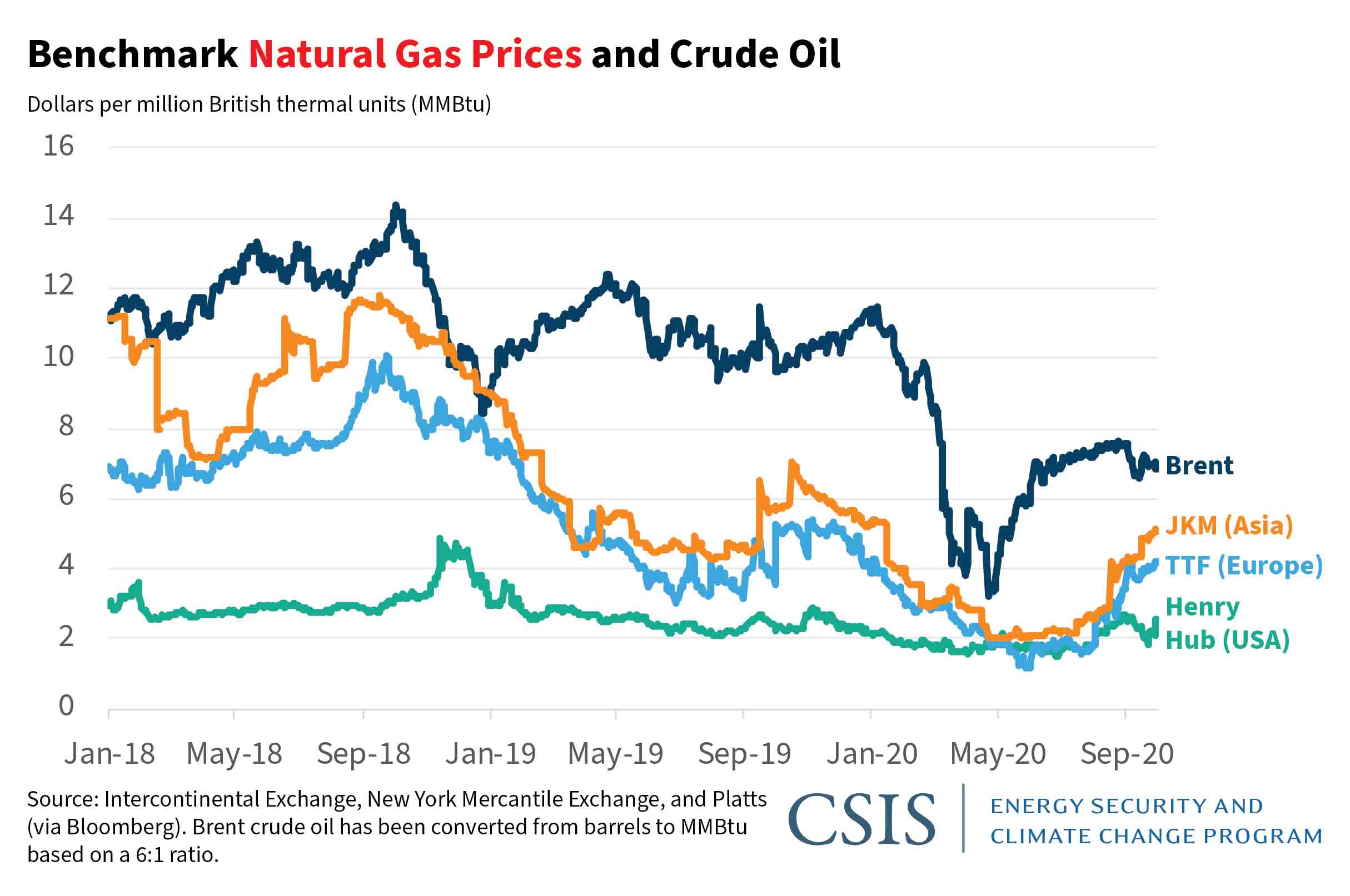 The United States and Russia led in reducing exports. Liquefied natural gas (LNG) exports in the United States were 67 percent lower in July than in January. Russia’s pipeline exports fell 17 percent during the first half of the year. (Interestingly, pipeline exports from the United States held steady, as did LNG exports from Russia.) Other exporters reduced supplies by less: Canada’s exports were down 10 percent (through July), Norway’s were down 5 percent (through August), and Australia’s exports fell on a month-to-month basis but were up year-on-year (new projects are still ramping up). Qatar, the largest LNG exporter, kept producing at capacity. It was an uneven adjustment—driven by circumstance rather than market size.

Lessons from the Adjustment

The adjustment process worked, but prices stayed low for months until producers curtailed exports. At some point, the three main benchmark prices even converged, wiping out arbitrage between the three big consuming markets of the world. Producers barely covered their cash costs during the summer (some prices, especially in Asia, are still indexed to oil; those prices stayed higher than spot prices, supporting exports). Storage helped too: companies imported gas into Europe to store it, hoping to make a profit selling it later. Without excess storage in Europe, the adjustment would have been far more painful.

Flexibility came from different sources. U.S. LNG contracts tend to allow buyers to not lift cargoes if they do not want them (in most long-term contracts, buyers would pay a penalty for doing this beyond a small level). In the United States, the payment for the gas is often split between a fixed component, payable no matter what, and a flexible component, payable only when gas is produced and exported. This was an attraction of U.S. LNG—allowing buyers the flexibility to respond to a changing market. The reduction in U.S. LNG exports was a feature, not a bug—the market worked as expected.

Russia also reacted to market forces: it cut exports of pipeline gas to Europe, although the cut also reflected the fact that 2019 exports were artificially high, as Russia prepared for a possible cutoff in supplies through Ukraine (Russia stored extra gas as a buffer if transit was disrupted). For all the talk about Russia’s “monopoly” in Europe, it was unable to boost prices much. Russia ceded market share to LNG at first, but as U.S. LNG flows fell, its relative position improved. It is hard to look at 2020 and think that Russia has much power to keep prices artificially high in Europe.

Qatar has never dialed volumes up and down. It prefers to produce as much as it can and try to get the best money for that gas. Its marketing approach in 2020 followed this philosophy. But there is still something remarkable about it, that the gas market adjusted without the world’s largest LNG exporter curtailing output—like the oil market rebalancing without Saudi Arabia cutting production. The signal was clear: Qatar can outcompete everyone and will not sacrifice volumes to prop up prices.

The stress on the market was bearable too. The gas system combines rigidity and flexibility—on the one hand, there are pipelines that go from point A to point B, and gas that is sold under 20- or 25-year contracts; but, on the other, there is LNG that can turn on a moment’s notice and deep pipeline networks that can shift gas toward places that need it. In every crisis, there will be the occasional squabble—a contract renegotiated, parties going to arbitration. The ruminations from Covid-19 were well within the reasonable range—the system did not break.

Lessons for the Future

Gas markets have never been conducive to cartelization. Long-term contracts create incentives for steady production; gas prices have historically been tied to oil, weakening the link between output and prices; and the elasticity of demand has meant that any sustained price hike could prompt consumers to switch to other fuels. Add to that the dispersed nature of gas markets and the prominence of market economies as major producers, and there has never been the confluence of factors to produce coordination. Covid-19 was the ideal setting for producers to come together. Yet at no point during this crisis was there a serious attempt to coordinate among producers.

Qatar’s reluctance to play along is especially noteworthy. Its behavior might be due to inertia—not doing something because it was not done before. But there is a strategic case for letting prices drop. It is not just to harm competitors. The prize is to scare them away. The world’s producers are rushing to build the next, and maybe final, tranche of new gas and LNG supply. In doing so, they need to convince investors and financiers that their projects will make money. This task is harder when there is no meaningful floor under gas prices, and when no one will step in to prevent prices from collapsing. This is what Qatar told the world. And in that market, only a few producers can survive—Qatar first among them.

© Copyright 2020 by the Center for Strategic and International Studies. All rights reserved.

Energy and Sustainability , and Energy and Geopolitics