#EndSARSNow protests have rocked Nigeria. Although they are a national movement, demonstrations have largely occurred in the country’s southern states. Some Nigerian officials have characterized the campaign as targeted toward President Muhammadu Buhari, but this view fails to consider that the scale of the protests in the south is a reflection of the pattern of police abuse in the country. Though incidents of police violence occur throughout Nigeria, they are felt acutely in the south; it is no wonder then, that the loudest calls for police reform are coming from this region.

In Lagos State, where #EndSARSNow protests shut down roads and schools, police violence has been consistently high and rising. Since 2015, Lagos State has recorded both the highest number of events in which the police have targeted civilians and protesters and the highest number of fatalities reported from these interactions. As the maps below demonstrate, southern states have borne the brunt of much of the police’s use of force against civilians and protesters. Of the 10 states with the highest number of events where police have targeted civilians or responded to peaceful protesters, only two (the Federal Capital Territory and Kaduna) are located outside of the country’s south. There is also a geographic pattern to the distribution of support for the protests; consider, for example, a recent survey in the aftermath of the #EndSARSNow protests found that 85 percent of Lagos State residents support the protest, compared to 70 percent across the entire country.

Though some have suggested that the geography of the #EndSARSNow protests is the result of a partisan bias against Buhari, it seems more likely that it is a function of where police abuses have been concentrated. 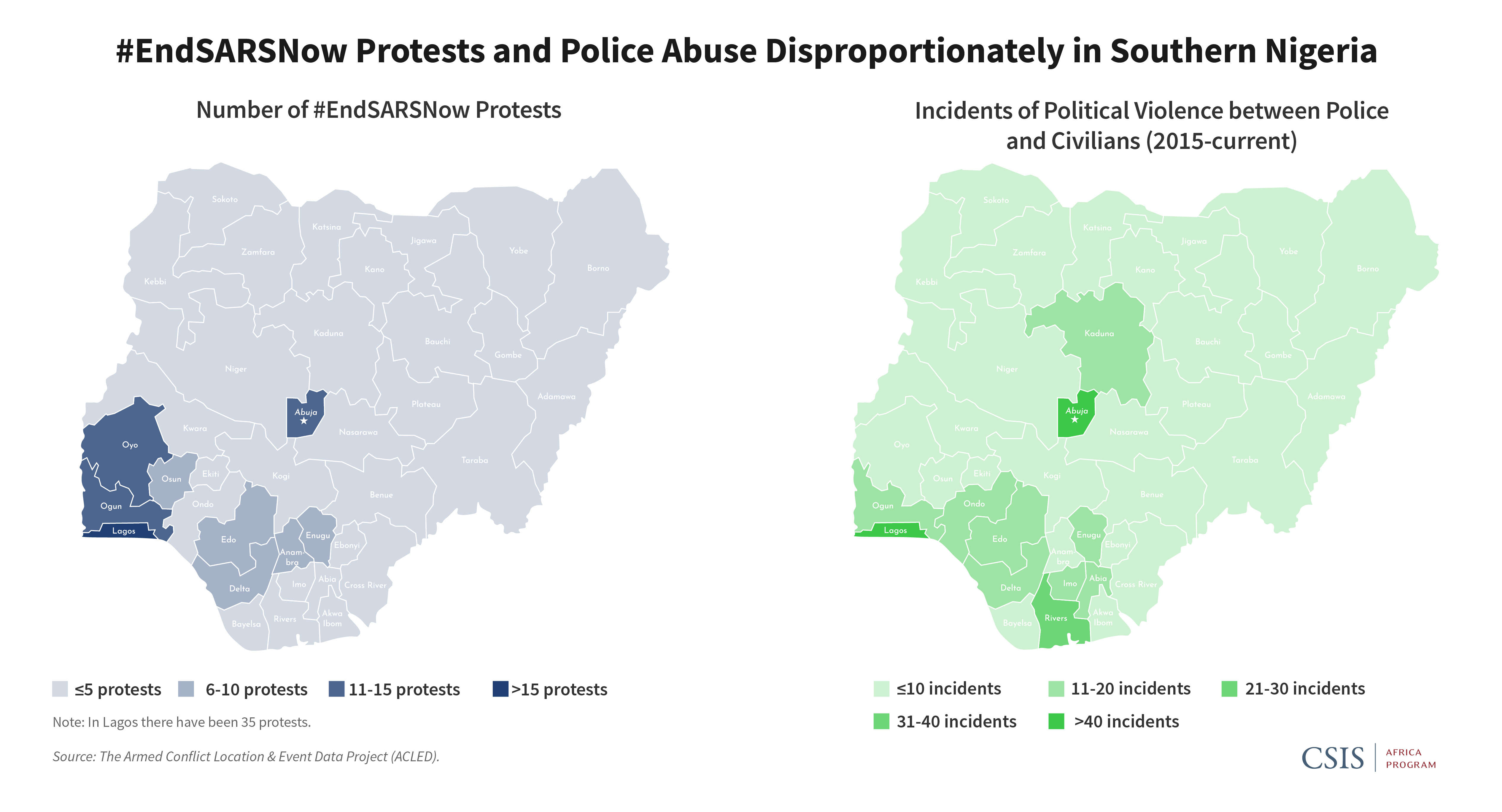 A History of Brutality and Protests

The #EndSARSNow campaign is not a new phenomenon. It was first used in 2017 and resurfaced early this October after footage spread showing Special Anti-Robbery Squad (SARS) officers engaging in extrajudicial killings. The recent protests against SARS should thus be understood as a rejection of the status quo, in which members of the security sector engage in violence against civilians with little fear of being held accountable. A report from Amnesty International released this summer, which examined abuses by SARS, concluded that “few cases are investigated and hardly any officers are brought to justice on account of torture and other ill-treatment.”

But SARS is not the only problematic unit within the Nigerian Police Service (NPS) or the country’s broader security service apparatus. For years, human rights organizations have documented pervasive abuse and corruption within their ranks. A 2014 Amnesty International Investigation, for example, found that torture was widespread and so institutionalized that some stations had special rooms where torture would be conducted. This report tied corruption to these abuses, noting that “police often detain people, sometimes in large dragnet operations, as a pretext to obtain bribes, alleging involvement in various offences ranging from ‘wandering’ (loitering) to robbery. Those who are unable to pay the bribes for their release are often tortured as punishment, or to coerce them to find the money for their release.” The troubling turn that policing has taken in Nigeria in recent years is also reflected in the latest round of Afrobarometer data in 2017, which found that more than 40 percent of those polled said that the “ability of ordinary people to get help from the police when they need it” is either “worse” or “much worse” compared to recent years.

Similarly, violence by the military against civilians is on the rise. High-profile instances of security sector abuses—such as the 2015 Zaria massacre, in which security forces murdered more than 300 Nigerians—have called attention to the need for reform. Also troubling is the steady rise in everyday violence targeting civilians. According to the Armed Conflict Location & Event Data Project (ACLED), from the beginning of 2020 to November 14, there have been more than 50 instances of police violence targeting civilians and more than 60 additional events where police have responded to peaceful protesters. This is an increase from 2019, when there were 35 and 40 such events reported, respectively; it is also a remarkable increase from 2015, when there were 20 of these reported events combined.

The Nigerian government’s response to the #EndSARSNow protests underlines its unwillingness to engage in meaningful security sector reform. The initial promise to disband SARS was coupled with the announcement of a new Special Weapons and Tactics (SWAT) unit—putting old wine in a new bottle and calling it a day.

Even after the military opened fire on demonstrators, the government has been reticent to acknowledge the violence. The Nigerian Army tweeted that these reports were “Fake News!!!” During an address to the nation, Buhari did not mention the tragedy, missing an opportunity to engage directly with the issue of security sector reform and accountability. On November 2, his attorney general claimed the police as an institution has already reformed and there was no need to do more.

The Prospects for Reform

The #EndSARSNow protests have shed light on an aspect of security in Nigeria often overshadowed by communal violence in the middle belt or the Boko Haram insurgency in the north: the threat of police-led violence in the south. Examining the geographic patterns of state repression and #EndSARSNow protests underscores that the protests are a response to the everyday threats that Nigerians in the country’s south face from the security services. A survey of 1,500 Nigerian suggests that decentralization of the police, a measure proposed by the Nigerian Senate earlier this year, is a more popular policy solution than the dissolution of SARS and creation of a SWAT unit. Decentralizing policing, establishing community policing units, and pressing for public accountability may improve policing throughout the country—and are particularly important reforms in Nigeria’s southern states.

Hilary Matfess is a senior associate (non-resident) with the Africa Program at the Center for Strategic and International Studies in Washington, D.C.