What Is at Stake

For decades, the United States valued international exchanges as a smart power strategy to attract the best and brightest and create lasting impressions and connections between the United States and partner nations. Whether these programs focused on youth, higher education, or professional training, the individuals who took part built critical relationships with the U.S. government. When traveling, especially in the developing world, one is likely to encounter many government ministers and private sector leaders who studied or spent time in the United States and maintain an affinity for its ideals.

At their height during the Cold War, U.S. funded exchange programs supported some 18,000-20,000 students for study in the United States each year. Writing for the National Defense University’s PRISM journal, former administrator of the U.S. Agency for International Development (USAID) Andrew Natsios elucidates the value of these programs playing out as graduates rise “to positions of power in their home countries over several decades.” Consider the example of Indonesian finance minister Sri Mulyani who completed a doctorate at the University of Illinois and worked as a lecturer at Georgia State University. Today, she is leading efforts to bolster market-based democratic principles and counter long-standing corruption in her country.

Yet these affirming anecdotes about winning hearts and minds have not been enough to sustain exchange programs. The breadth and scope of U.S. government funded exchange programs are in decline, while our competitors have created attractive alternatives. U.S. programs have been hampered by resource limitations, regulators’ unrealistic expectations, monitoring limitations, and visa restrictions. And it’s not just exchange programs. Over the last five years, the number of international students studying in the United States decreased by 10 percent, while neighboring Canada (who declared higher education exchange as a foreign policy objective) saw a 68 percent increase in international students.

The 2017 U.S. National Security Strategy seemed to respond directly to this decline when it tasked policymakers across the U.S. government to identify opportunities for “cultural, educational and people to people exchanges.” However, this mandate was not followed by further guidance on the implementation of U.S.-supported exchange programs as a geopolitical tool. The lack of practical guidance, alongside rising demand for global education, more opportunities for self-financing, out of date programming assumptions, and a growing interest among U.S. competitors in this space has created a tangle of challenges. Without a solution, the United States risks losing its long-standing position of prominence for students seeking educational and professional training. The implication of such a forfeiture could be significant, not only for individual students, but for the trajectory of entire nations.

We are no longer in a Cold War era. The demands of the rising middle class for higher education (including self-financed education) have resulted in an estimated 100 million students worldwide. Enrollment figures are expected to grow approximately 200 percent by 2040. Modalities are changing as well. The Covid-19 pandemic has resulted in shifts of learning systems online. Systems have changed, incentives have changed, and the world has changed. And yet, the U.S. model for exchange has stayed largely the same.

Since 1946, the U.S. Department of State’s flagship Fulbright Scholarship has supported some 400,000 visiting students from 160 countries. Each year 4,000 foreign students and 900 foreign visiting scholars receive a Fulbright to study in the United States. Notable alumni include the current presidents of Afghanistan, Peru, and Belgium. The International Visitor Leadership Program (IVLP), established two years after the Fulbright, has supported more than 200,000 international visitors on short-term stays. This includes more than 500 current or former chiefs of state or heads of government, including Indian president Narendra Modi and Malaysian prime minister Mahathir bin Mohamad.

USAID also supports educational exchange, often through sector-specific investments such as workforce development, information technology, private sector engagement, and the empowerment of marginalized and vulnerable populations. Currently, USAID supports some 3,000 students (the majority of whom are from Asia and Africa) for degree and short-term programs in the United States each year.

Finally, the Department of Defense operates exchange programs. Established in 1976 under the Arms Export Control Act, the International Military Education and Training Program (IMET) offers grants for foreign military personnel to train at U.S. military schools and receive skill-based and language training. The program aims to strengthen military alliances between the United States and partner countries. IMET was expanded in the 1990s to include management and legal training as well as training programs for civil sector personnel. In fiscal year 2018, 111.3 million dollars went toward training programs for students from 125 ally and partner countries.

Because these agencies manage separate exchange programs, tracking the current levels of educational exchange offered by the U.S. government is difficult. We estimate current numbers of scholarships today to approximately 12,000 students per year, based on data from individual agencies. There is no central repository for this information.

U.S. strategic competitors, particularly China, have recognized the soft power that results from education exchange. According to 2020 data from the United Nations Educational Cultural and Scientific Organization (UNESCO)’s Global Education Monitoring Report, China is by far the largest provider of scholarships worldwide, followed by South Africa, Russia, the United Kingdom, Turkey, Egypt, India, Germany, and Japan. For public funding, the United States does not make the top ten. 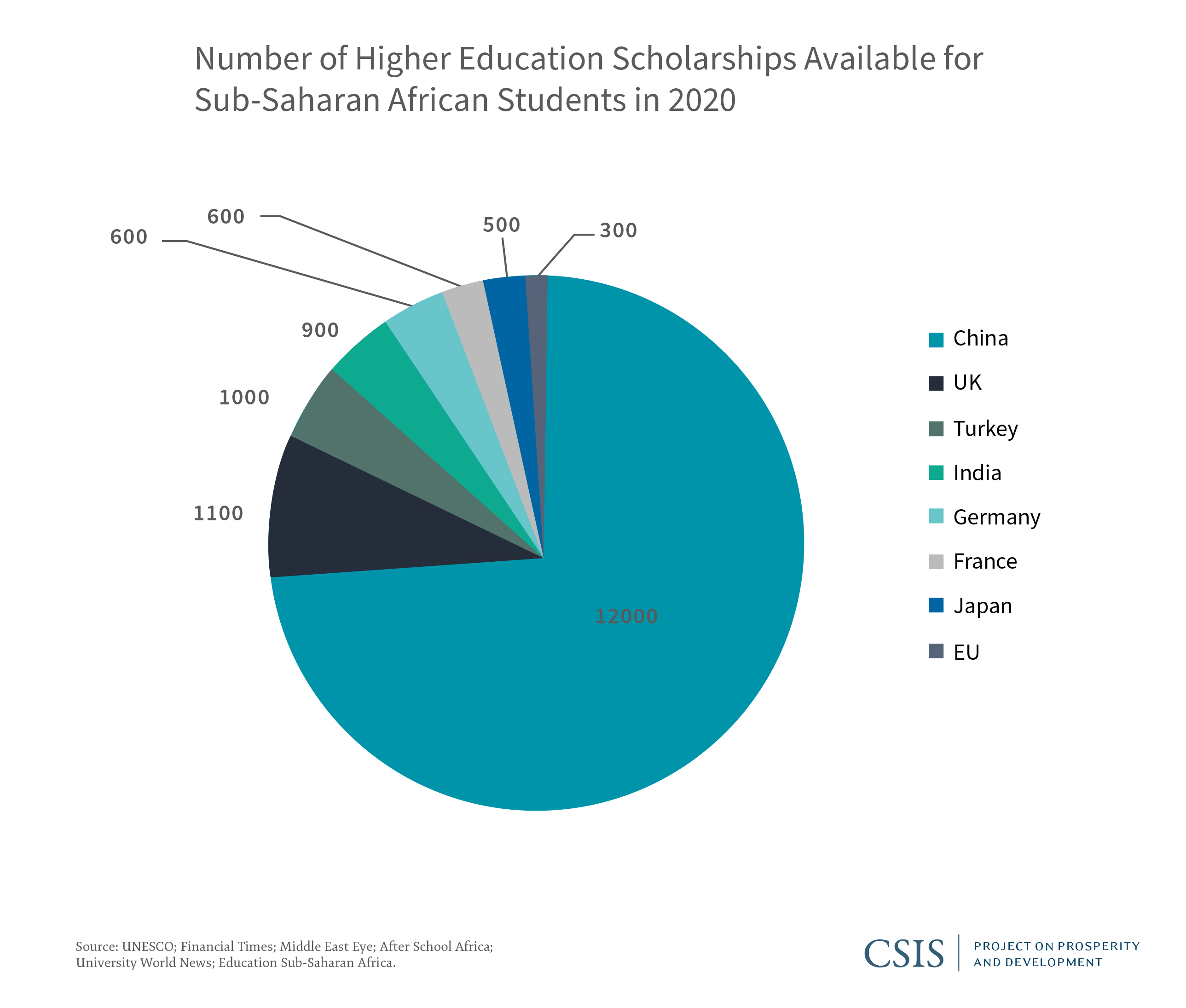 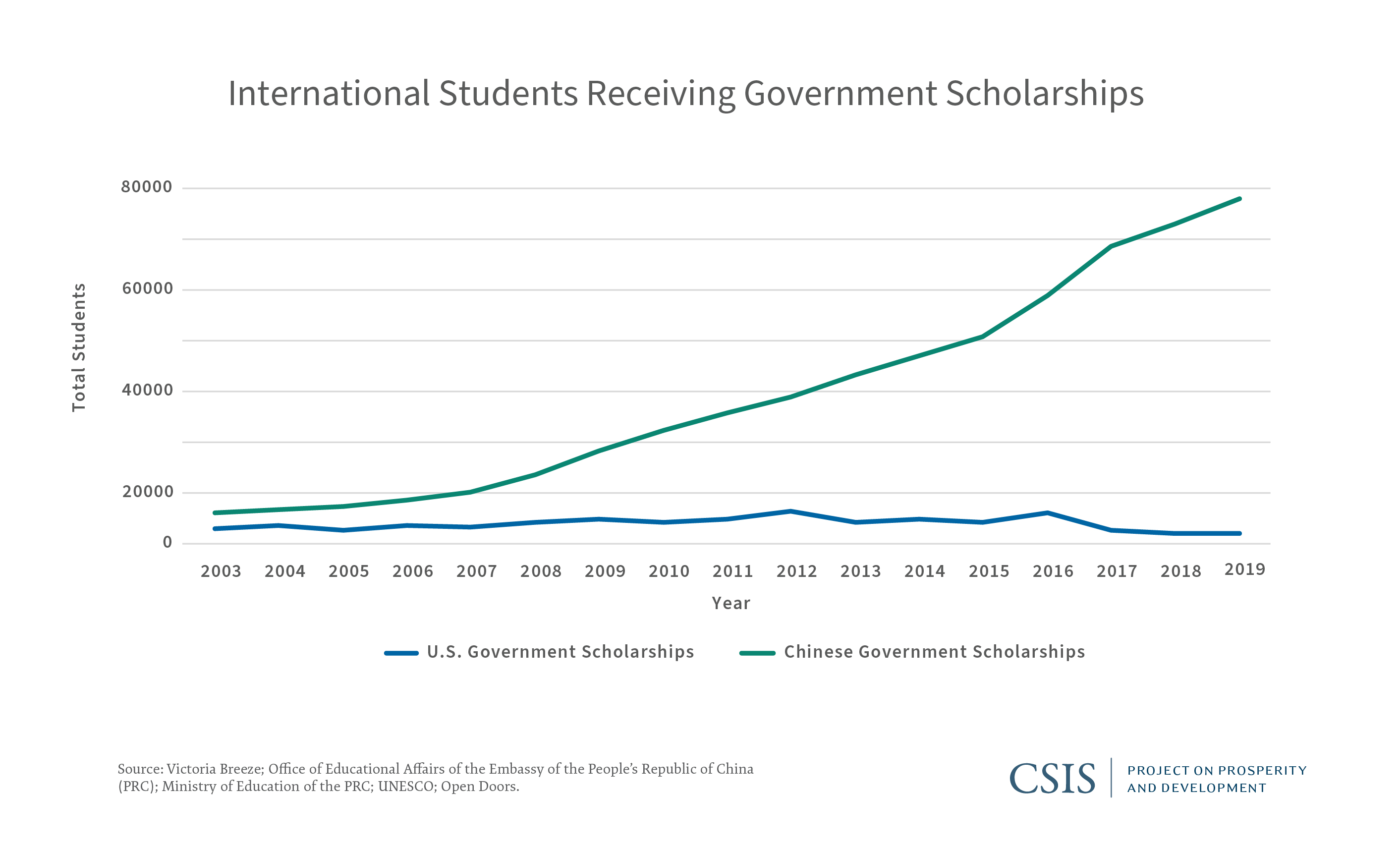 In 2003, preceding the launch of China’s ambitious Belt and Road Initiative (BRI), there were fewer than 1,300 African students enrolled in Chinese universities. By 2017, there were more than 80,000, with 20 African universities supported through China’s 20 +20 Initiative. China provided some 50,000 scholarships in 2018—up from 30,000 just three years prior. In 2020, China offered 12,000 academic scholarships to African students; by comparison, the United Kingdom offered 1,000, and the United States’ flagship Fulbright program offered just over 200. The China Scholarship Council is also supporting Arab universities and ministries by funding students from Iraq, Yemen, Algeria, Egypt, Morocco, and Sudan for study in China. The proportion of self-funded students from Africa is also increasing, as Chinese universities offer an economical option for a rising middle class of students interested in traveling abroad for their education.

For those students who cannot travel to China for their education, China is bringing language and cultural study to them through Confucius Institutes. There are approximately 525 of these so-called “trojan horses” worldwide: 159 in the East Asia Pacific region and 29 centers in Latin America. New research by AidData shows that the institutes are more likely to deploy in countries that are “closely aligned with its [China’s] security and foreign policy concerns.”  Many institutes at public universities in the United States gloss over concerns about censorship and the spread of propaganda.

China is also increasing support for short-term travel by government officials from the developing world. In 2017, Beijing invited 1,000 emerging African leaders for training in China as part of the African Political Party Leaders program. In 2019, Freedom House reported that China hosted 36 national government officials for training on media and information management. Participants from the Philippines, Saudi Arabia, the United Arab Emirates (UAE) and Thailand participated in three-week training seminars on online censorship and surveillance while leaders from Ethiopia and South Sudan joined training programs on public opinion management and single party rule. A remote training center in Guangxi hosts hundreds of representatives from across Asia for training on the benefits of illiberalism and state control.

China’s approach to global education support is not dissimilar from the expansion of its Belt and Road Initiative. That is: spend big, with little attention to national context or need, with preference to elites, and with little to no transparency or accountability. Recent case study analysis of a Chinese scholarship program for Ugandan students found that graduates had “mixed experiences in China” leading the researcher to conclude that “the potential return on this investment [scholarships] remains to be seen.” These well-funded exchanges may be skipping over all the best practices around support for transparent, inclusive, and workforce generating programs. As such, what is true of the Belt and Road Initiative is true of China’s wider approach to exchanges: choosing the quickest route with the least amount of accountability prioritizes elites and leaves a trail of social and economic risks for those unable to access its benefits.

There is a difference between what the United States and its competitors offer when it comes to educational exchange: the standards on which the exchange is based. The United States’ competitive advantage remains its high-quality education, fair and transparent recruitment processes, and exposure to civic-minded curriculum. These values must be contrasted against the competing models. In the same way that bridges and roads do not automatically make good development, nor do hefty scholarships and language centers replace strong education systems and reforms.

Building on this contrast will require modernizing the U.S. government’s strategic approach to educational exchange. Despite a robust statement in the 2017 National Security Strategy, few Department of State Integrated Country Strategies and USAID Country Development and Cooperation Strategies include objectives to support people to people exchanges. USAID’s 2018 Education Strategy documents a positive youth development approach but does not include scholarships or exchange more broadly.

The incoming National Security Council should initiate a strategic review of education exchanges as political tool. The strategy must involve taking stock of the current challenges, vast opportunities, and dramatically different landscape. It should include:


As the world prepares to emerge from a global pandemic under new leadership of the U.S. government, now is the time to reinvest and reinvigorate the prominence of U.S. exchange programs. As the growing population of young people around the world come of age, the United States has the opportunity to situate itself as a country of innovative, entrepreneurial, democratic values and ideals—or to fall short, and let others surpass it in the competition for the hearts and minds of the next generation of global leaders.

Richard Crespin is a senior associate (non-resident) with the Project on Prosperity and Development at the Center for Strategic and International Studies (CSIS) in Washington, D.C. Colleen Waterston is a research associate with CollaborateUp. Kristen Cordell is an adjunct fellow (non-resident) with PPD at CSIS.