A World in Crisis: Will Buying American Help or Hurt?

As the public health sector faces significant supply shortages, concerns have grown about overreliance on international supply chains in the medical field. In response, the Trump administration is considering a new “Buy American” executive order, which aims to incentivize pharmaceutical companies and medical suppliers to relocate to the United States by limiting waivers for government purchases of foreign medical goods. This initiative could return some, though not all, production back to the United States while generating increased costs. Though the administration has maintained that it would not impose restrictions on government procurement of medical supplies during the Covid-19 crisis, such measures would cause price and production disruptions even under normal circumstances. In addition, the executive order would further hollow out United States government procurement commitments made to trading partners and could lead to foreign governments limiting U.S. access to their own government contracts.

Q1: What is the history of Buy American?

A1: Buy American dates back to the Buy American Act signed on March 3, 1933, during President Herbert Hoover’s last day in office. The legislation was motivated in part by the “Buy British” marketing campaign in 1931 and frustration over the amount of “Made in England” products purchased to build U.S. government properties. In the aftermath of the Great Depression, the legislation was also intended to safeguard American jobs for a major upcoming construction contract—the Hoover Dam. While foreign firms had expressed interest in the procurement, none submitted a bid once the request for proposal was delayed until March 10, 1933, seven days after the legislation was signed. Over time, Buy American policies have continued to serve an important role in ensuring U.S. companies are given preference in government contract bidding. When government procurement is covered by Buy American, U.S. companies usually win the contract. Yet, as globalization accelerates, the policy has become more controversial and difficult to enforce.

In practice, the Buy American Act works as a price preference instrument in government procurements of domestic end products and domestic construction materials. Proposals that do not meet Buy American requirements are assigned a cost penalty for their bids. The criterion to qualify as a domestic end product and penalties for the failure to do so went unchanged from their establishment in 1954 until 2019, when President Trump increased the penalties for foreign end products and required that 95 percent of the cost of all components for metal and steel products be made in the United States. This is in contrast to the 1982 Buy America Act. The Buy America Act requires recipients of federal funds from the Department of Transportation—typically grants provided to state and local governments—to purchase American goods from American companies.

Q2: What would the executive order do?

A2: Faced with a global pandemic, lawmakers in the United States and Trump administration officials have raised concerns about overreliance on international supply chains in the medical field, particularly from China. Peter Navarro, senior trade adviser to President Trump, has been the leading advocate for eliminating this dependence and is reported to be drafting the executive order to close loopholes and eliminate waivers to the Buy American Act allowing the federal government to purchase foreign medical supplies without penalty.

The executive order would seek to close some or all of the five exceptions to the Buy American Act, which allow for the purchase of foreign end products without penalty. These include when procuring a domestic good is not in the public interest, not available in sufficient quantity, would be unreasonable due to cost, are intended for resale, or are a commercial information technology item. Penalties can also be waived if the good will only be used outside the United States. Under the Trade Agreement Act and the Government Procurement Agreement (GPA), the president also has the authority to waive the requirements of the Buy American Act with parties that the United States has free trade agreements with, least developed countries, and the Caribbean Basin countries. The United States also opens its government procurement market—with limitations—to free trade agreement partners, without discrimination or penalization. According to reports thus far, the proposed executive order would remove these waivers, limit exceptions for medical supplies and pharmaceuticals, and penalize foreign end products regardless of their country of origin. While this would not prevent foreign companies from bidding, it would be the first Buy American order to remove such waivers and significantly limit government agencies’ procurement options.

A3: It appears as though the executive order would likely violate U.S. commitments under the GPA and government procurement commitments it has made to various trading partners through free trade agreements. The United States became a party to the Tokyo Round Code on Government Procurement in 1979, then under the General Agreement on Tariffs and Trade, and in 1996 became a founding member of the GPA under the auspices of the WTO. Made up of 48 WTO member countries, up to $1.7 trillion of public procurements are opened up among GPA members as a part of the agreement. The GPA requires that bids on government contracts covered by the agreement by foreign companies in GPA member countries be treated without discrimination. The United States schedule of commitments covers a range of agencies that procure medical supplies and pharmaceuticals. Establishing penalties that would treat companies from GPA countries less favorably than U.S. companies would likely breach U.S. GPA commitments and commitments it has made to its free trade agreement partners. The GPA is subject to dispute settlement at the WTO, so the United States could face litigation in Geneva. The United States would likely defend the executive order by claiming the measures are necessary to protect human health and essential security interests, which are two justifications GPA members may use to breach their obligations.

Q4: Will a Buy American Executive Order help or hurt?

A4: Two lines of argument have formed over this executive order. The first is based on the degree to which the United States relies on international supply chains in the medical field. Proponents of the order argue that the United States should take dramatic action to address overreliance head on while there is still political support to do so. Supporters claim that doing so would move the United States toward self-sufficiency and resiliency and would provide economic opportunity during the ongoing crisis and recovery. Proponents point out that the Buy American Act was established for this purpose and has been effective at protecting domestic industries. In 2018, for example, the GAO found that less than 5 percent of products covered by the Buy American Act, equivalent to $7.8 billion, were foreign end products. Based on this success, supporters argue that now is the time to eliminate loopholes and waivers.

Critics of the executive order argue that despite Buy American’s track record of protecting American suppliers, there is reason to question the anticipated impact of the order. In the same GAO study, it found that only 2 percent of foreign goods are procured using Buy American waivers or the Department of Defense’s (DOD) exceptions, which suggests that limiting those would provide little incentive to reshore. The accessible medicines community, business community, and Senate Finance Republicans all have also warned that the order would disrupt supply chains necessary to provide affordable and timely access to critical pharmaceuticals and medical supplies. As a result, critics foresee the executive order offering marginal incentives to domestic companies while simultaneously disrupting supply chains. 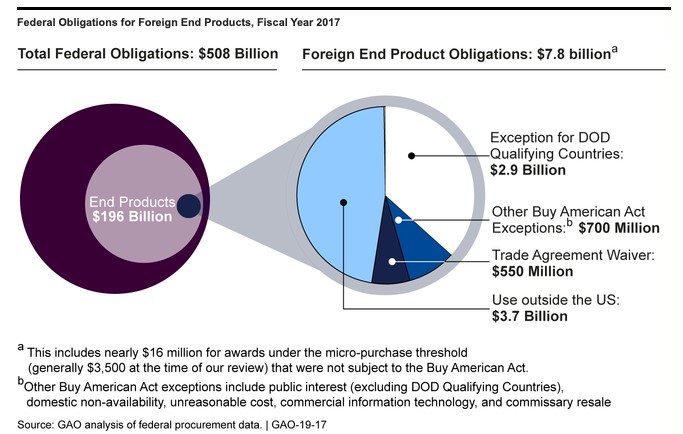 It also remains unclear how the order would impact the procurement of medical supplies from China, which proponents claim is the most worrisome source of U.S. dependence and vulnerability. As China is not a DOD qualifying country, is not a member of the GPA, and does not have a trade agreement with the United States that includes procurement obligations, all of their goods procured by the U.S. government are already penalized as foreign end products. As a result, if the executive order only removes these waivers, it would have a limited impact on China. Currently, the government is able to procure goods from China based on the exceptions defined in the Buy American Act, such as for public interest. If the executive order makes changes to the exceptions, that would impact procurements, but it would also create tension with its health and security justification for potentially violating the GPA. Given this contradiction, it is important to clarify if the goal is to diversify medical supply chains or reshore jobs from China. A recent Senate bill introduced in March to study which countries the DOD relies on for medical supplies is a good start in that process.

The impact of the executive order is likely to be somewhere in between these two sides. Regardless of Buy American's long-term impact on supply chains and production, there is no evidence that it would provide a quick solution to the current pandemic. In fact, making Buy American provisions tighter during the current crisis would likely do more harm than good. Though the cost impact might not be as substantial as critics argue, Buying American would also have a marginal impact on reducing dependency on foreign supply chains, in part because the order would only impact government procurement and not influence private purchasing decisions. Buying American has been a helpful tool in the past, and overdependence does present challenges that need to be addressed. In the present crisis, however, this proposed executive order would harm U.S. businesses, break U.S. commitments to its international partners, and offer little help to solving a global challenge.