It is obvious that the world now faces a wide range of potential wars and crises. What is far less obvious is the level of confrontation between the U.S. and its strategic partners with both Russia and China, the rising levels of other types of violence that are emerging on a global level, how serious these wars and crises can become, and what kind of future could eventually emerge out of so many different crises, confrontations and conflicts, and trends.

These issues are addressed in depth in a new analysis by the Emeritus Chair in Strategy at the CSIS entitled A World in Crisis: The “Winter Wars” of 2022–2023. This analysis is attached at the end of this announcement and is also available on the CSIS website at https://csis-website-prod.s3.amazonaws.com/s3fs-public/publication/221115_Cordesman_Winter_Wars.pdf?hONBZbcu.qIpPxSpMtQASsMIP4sguQfI

This analysis explores the risk on the basis that war does not have to mean actual military conflict. Here, it is important to note that avoiding or minimizing combat is scarcely peace. As Sun Tzu pointed out in the Art of War well over 2,000 years ago, “war” does not have to involve the use of military force or any form of actual combat. His statement that “the supreme art of war is to subdue the enemy without fighting” applies to every form of major military confrontation and gray area warfare between opposing powers.

It recognizes that it is all too easy to predict dire outcomes from the War in Ukraine, the current arms races with Russia and China, and growing levels of violence and confrontation between other states. There is still a case, however, for examining the broader impact of the war, the growing intensity of the arms races with Russia and China, and the current overall patterns of global conflict as the world enters the winter of 2022-2023. It is already clear that this will be a deeply troubled winter in many areas of the globe, that the level of confrontation between major powers has risen sharply, that they do seek to subdue the enemy without fighting, and their rivalry has become the equivalent of political and economic warfare.

It is equally clear that the wide range of lower-level conflicts between other powers, their civil wars, and the abuses many governments commit against their own citizens are also intensifying, although many of these conflicts have been going on in some form for years or even decades. In far too many cases, the world is not moving toward peace. It is moving towards repression and war.

Accordingly, this analysis argues that the world already faces a series of possible and ongoing “Winter Wars” in 2022-2023 that may not escalate to open military conflict but that are wars at the political and economic level and in competition to build-up more lethal military forces both for deterrence and to exert political leverage. It also shows that these “Wars” already pose serious risks and could escalate sharply and in unpredictable ways for at least the next five to ten years.

The global list of wars that are ongoing in the winter of 2020-2023, and that seems likely to continue to affect global security in the future, that this study examines includes:

The analysis warns that the world is not moving towards peace, that new forms of Cold War divide all the world’s major powers, and that far too few smaller states have solid levels of development, effective governance, and are moving toward peace and stability.

It also shows that Sun Tzu was all too correct in stating that “the supreme art of war is to subdue the enemy without fighting.” World War I and World War II have shown how dangerous it can be to escalate to major conflicts, and today’s world of nuclear weapons, tightly integrated global supply chains, and steadily more lethal forms of conventional combat have greatly increased the damage a truly major war can inflict. It is all too clear that the relations between the great powers, and between the more advanced and developed democracies and authoritarian and repressive states, have shifted from the image of cooperation to active confrontation.

The analysis shows that major powers and developed nations are actively involved in trying to achieve the “supreme art of war.” The list of “winter wars” makes it all too clear that major powers now focus on political and economic conflicts and confrontations and on efforts to use military force that are limited to exploiting political and military leverage without engaging in combat.

While the major powers still seem to find it obligatory to at least mention “cooperation,” their focus has clearly shifted to a far more tense set of goals and plans and more serious risks in terms of political and economic struggle that at least approach a form of warfare and increase the risk of escalation to the use of force.

Moreover, the analysis does understate the full threat of “winter wars” to the extent it only touches briefly on the number of developing and poorer states that are experiencing serious internal violence; and where the failures of their governments come to grips with internal tensions, population growth, and sustained development makes them as much of a threat to their peoples as any terrorist or extremist faction.

Santana once warned that “he who forgets the past is condemned to repeat it.” In some ways, the world has already done so in two World Wars. For all of the military tensions that preceded World War I, most Europeans though assumed that the equivalent of a stable level of deterrence had been established following the war of 1870, which would prevent any major European conflict in spite of the arms races that were increasing the lethality and size of European forces.

The results were devastating, but similar assumptions about postwar stability largely governed Europe until the depression and the collapse of the Weimar democracy in Germany, and then helped encourage isolationism and appeasement until the German invasion of Poland. The result was World War II – a war that did even more damage on a global basis than World War I, and then helped to create a Cold War that may well be returning in more lethal and even more global form. 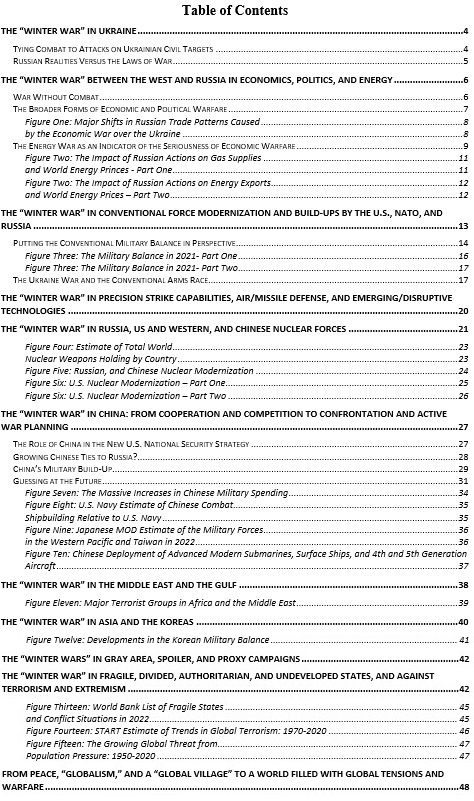 Defense and Security , Defense Budget and Acquisition , Defense Strategy and Capabilities , and Geopolitics and International Security