Zero Tariffs, Zero Barriers, Zero Subsidies: Is This Even Possible?

On Tuesday, President Trump took to Twitter to talk about trade once again. But instead of repeating that “tariffs are the greatest” or “trade wars are good and easy to win,” the president struck more of a free-trading theme and called for the United States and EU to drop all tariffs, non-tariff barriers (NTBs), and subsidies: 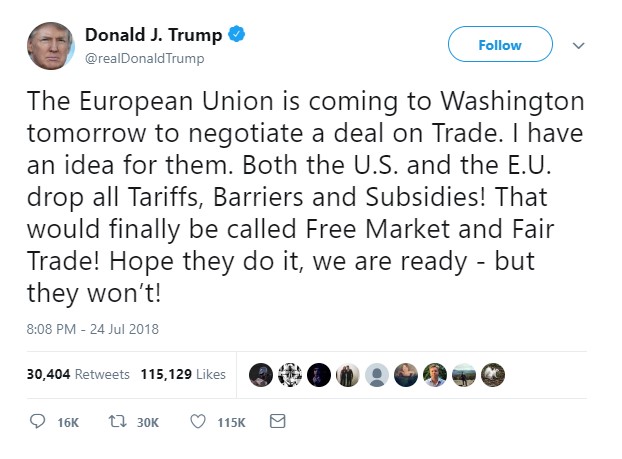 The following day, President Trump and the President of the European Commission Jean-Claude Juncker agreed to take up the challenge. The two leaders released a joint statement that the United States and EU would “work together toward zero tariffs, zero non-tariff barriers, and zero subsidies on non-auto industrial goods.” Most trade professionals viewed this as a step forward, and a potential off-ramp from the escalating trade war. If the United States and Europe were to seek a comprehensive free trade agreement, what would be some of the most difficult tariffs, barriers, and subsidies for each side to drop?

Q1: What tariffs, NTBs, and subsidies would be among the hardest for the United States to give up?

Despite President Trump’s frequent complaints about other countries’ subsidies, the United States does the same. Some of its most heavily subsidized products are agricultural goods such as corn, soybeans, and wheat. The U.S. Department of Agriculture operates over 60 different aid programs for farmers and the entire federal government spends over $20 billion annually on subsidies for farm businesses. These figures don’t include the $12 billion in emergency relief recently promised for farmers hurt by the trade war. Subsidies, whether direct payments or price loss insurance, allow farmers to sell their products at a lower price, which draws complaints from people like Mexican corn growers or Brazilian soybean farmers. Despite some opposition from both parties, farm subsidies are among the most difficult federal policies to overhaul.

Since 1981, the U.S. government has guaranteed a minimum price for sugar. The government does this through quotas on foreign sugar imports, and price-support loans to U.S. sugar producers. Economists have estimated this costs Americans about an extra $3 billion a year in sugar (not only when they buy sugar, but also any foods containing sugar). For average citizens, that means an extra $10 on sugar each year, which is not enough for most voters to protest the sugar program. On the other hand, U.S. sugar companies have historically been large donors to representatives in Congress’s agriculture committees.

America’s peanut farmers also receive large subsidies. According to an analysis of the 2014 Farm Bill, peanut producers received over $340 per acre in taxpayer subsidies in the years that followed. This makes peanut farmers the largest recipients of government support outlays per acre by a wide margin (the average figure is just under $50 per acre).

Unlike the subsidies described above, the “chicken tax” is a tariff…and it’s not on chickens. Rather, the chicken tax refers to the 25 percent U.S. tariff rate on light trucks. The tariff was imposed in 1964 in retaliation for Europe’s decision to raise the tariff on imported chicken. Originally, the LBJ administration’s goal was to hurt (West) Germany—at the time Volkswagen was a major competitor to Detroit’s automakers. 34 years later, the 25 percent rate remains, and most pickup trucks on U.S. streets are made by U.S. firms. In fact, 82 percent of the vehicles sold by Detroit’s “Big Three” are light trucks. One of the changes in the renegotiated U.S.-Korea Free Trade Agreement this past March was a delay of the phase-out date for the light trucks tariff (from 2021 until 2041).

Q2: What tariffs, NTBs, and subsidies would be among the hardest for the European Union to give up?

The U.S. light trucks tariff persists to this day, and so do the EU’s measures against U.S. chicken. In fact, the EU protection against chicken has morphed from a high tariff rate, to an outright ban on U.S. chicken for potentially specious safety reasons. According to EU hygiene requirements, only water can be used to clean poultry entering the common market. The United States uses various “pathogen reduction treatments” beyond water, including chlorine-related rinses on its chicken exports. As a result, since 1997 almost no U.S. chicken has been sold in the EU. During the Transatlantic Trade and Investment Partnership (TTIP) talks, “chlorinated chicken” served as a rallying cry for Europeans who opposed TTIP.

Rules about pathogen reduction treatments serve as a good example of the basic health and safety disagreements between the United States and the EU that often serve as barriers to trade. Other examples include the European aversion to GMOs (the EU requires products that contain GMOs must indicate “genetically modified” on the label and on supermarket shelves), or its ban of artificial dyes common in processed foods. None of these rules are direct tariffs or subsidies, but they often make it hard for U.S. companies to export their products to the EU. Just like with chlorinated chicken, there are strong political pressures in the EU against “unregulated” U.S. chemicals or GMOs.

The EU is the home of many of the world’s most recognized Geographic Indications (GIs). GIs are common names for products based on the locations they come from. Think of parmesan cheese (from Parma, Italy) or champagne (from Champagne, France), for example. In much of the world, including in the EU, it is illegal to label a product with these words if it is not produced there. Europeans argue that centuries of savoir-faire have taught French vintners how to make Champagne, and that foreign merchants cannot replicate that with knockoff products. Americans tend to disagree and view GIs as snobby protectionism. As Paul Ryan said in 2015, “For generations, we’ve been making gouda in Wisconsin. And for generations to come, we’re going to keep making gouda in Wisconsin. And feta, and cheddar.”

The holy grail of European subsidies is the Common Agricultural Policy (CAP). The CAP is a 56-year old EU-wide planned system of production quotas and financial subsidies for farmers. Originally, the CAP set guaranteed minimum prices for Europe’s agricultural goods, which resulted in European farmers producing far more than they would in a free market. Economists joked that, in addition to its famous tourist attractions, Europe also boasted butter mountains and wine lakes. Today, the CAP pays farmers directly as long as they produce certain commodities (anything but fruit and vegetables, potatoes, and permanent crops) and keep their farms in good condition. Despite the fact that only 22 million Europeans (out of over 500 million) work in agriculture, the CAP takes up almost half of the EU’s entire annual budget, and many Europeans—particularly the French (where farmers receive €10 billion annually)—view the CAP favorably. A recent proposal to cut CAP funding by 5 percent caused French farmers to attack the leaders of the Tour de France with tear gas and bales of hay.

Q3: With all these political obstacles, is it likely that the U.S. and EU will reach a deal?

A3: Clearly there are large political obstacles to removing all tariffs, non-tariff barriers, and subsidies on both sides of the Atlantic. This might explain why Presidents Trump and Juncker only committed to doing so on “non-auto industrial goods.” Many of the biggest political obstacles are related to automobile tariffs, food standards, or agricultural subsidies. The White House and the European Commission know that a limited agreement that doesn’t touch these political hot potatoes will be much easier to pass.

Q4: But wait, how does this work with WTO rules about “Most Favored Nation” Tariffs?

A4: According to WTO rules, member states cannot give any other member lower tariffs on a specific good without extending that low rate to everybody else. This is called “Most Favored Nation” (MFN) treatment. Countries are allowed an exception to MFN when they form comprehensive free trade agreements. However, it is unclear if a limited U.S.-EU agreement on “non-auto industrial goods” would qualify. This leaves three possibilities: 1) The WTO might grant an MFN exception to a limited U.S.-EU deal. If not, 2) all other WTO members could benefit from whatever the United States and the EU agree to as most favored nations. Or, 3) the United States could reach an agreement with the EU and unilaterally decide not to extend those rates to all WTO countries. This last possibility might alarm trade experts worried about the administration’s attempts to undermine the WTO, but it could fit with some of President Trump’s previous skepticism toward the organization. President Trump and his advisers have been complaining about the MFN principle for a while.