Demolished: The French Political Landscape of Old is No More

The presidential election appears to have been just the beginning.  Yesterday’s French legislative elections was the coup de grace.  France’s two traditional parties – the Socialist Party and Les Républicains – have been shattered and the two far-left and far-right parties fared worse than expected.  The Socialists in particular, who will lose over 200 seats, have been vanquished.  Benoit Hamon, the Socialist presidential candidate, and Jean-Christophe Cambadélis, the Secretary General of the Socialist Party, lost their seats.

The political wrecking ball of this demolition is President Macron and his newly renamed political movement, La République en Marche (LREM), which is poised to win the second-largest parliamentary majority in the history of the Fifth Republic (founded in 1958).

Macron’s pledge to transform and renew French politics is off to a blazing start: as things stand, 60 percent of legislative constituencies will be represented by individuals who did not have a seat in the previous Assembly.  This is a level unseen since the advent of the Fifth Republic (40 percent in 2012, and 25 percent in 2007).  The number of women in the Assembly could reach new highs, after the record 155 reached in 2012.  Macron’s political party hails largely from civil society, which stands in stark contrast to the professional political class who is viewed as only interested in its own enrichment and advancement.  With the necessary seats set at 289 for a majority, LREM is looking at gains estimated upward of 400 seats for the party. 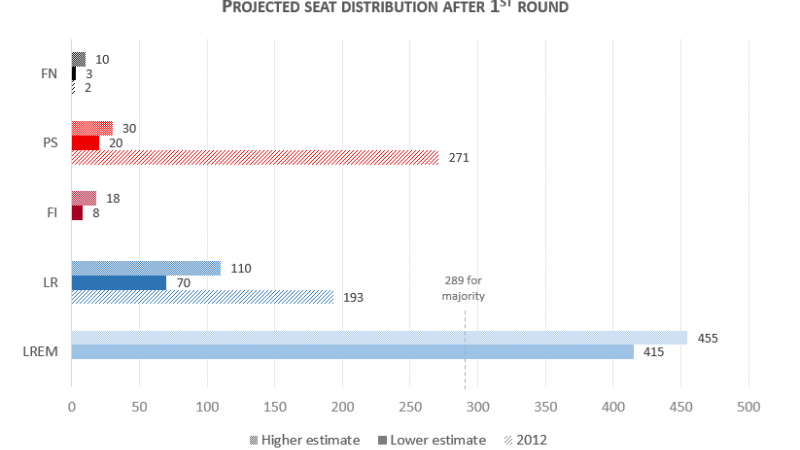 Data source: Ipsos-Sopra Steria
LREM’s seemingly historic legislative victory, however, has been marred by France’s highest voter abstention rate since 1958: 51.3 percent.  The most unusual of French presidential elections and a nearly flawless first month in office by Macron have created a self-fulfilling prophecy by which LREM appeared set for a majority which encouraged people, who assumed it would happen, to stay home.  There is also great disillusionment with and disorientation among voters of France’s traditional parties, leading many not to vote.

Macron’s sweeping electoral victory nevertheless poses a critical question: can a democracy thrive without a meaningful opposition?  Put differently, who will represent the 51% of French people who do not support Mr. Macron’s structural labor reforms, in keeping with France’s tradition of ‘street opposition’?  The real first test of Macron’s nearly uncontested power will be the labor market reforms he pledged to implement swiftly.  French civil society in the streets will soon face French civil society in the National Assembly.

Even before the second round of legislative elections next Sunday, it is clear that in just a few short weeks, sixty years of French political architecture, hierarchy and participation have been completely destroyed by a relatively unknown 39 year-old from Amiens.