On May 7, 2017, centrist Emmanuel Macron was elected as the next president of France and sworn in on May 14 as the youngest French president since Napoléon Bonaparte. Macron beat far-right Marine Le Pen 66.1 percent to 33.9 percent, with a relatively low turnout of 74.56 percent (compared to 2012’s 80.35 percent), 8.51 percent blank ballots and 2.96 percent spoiled ballots – a record high –, and without a formal political party structure. 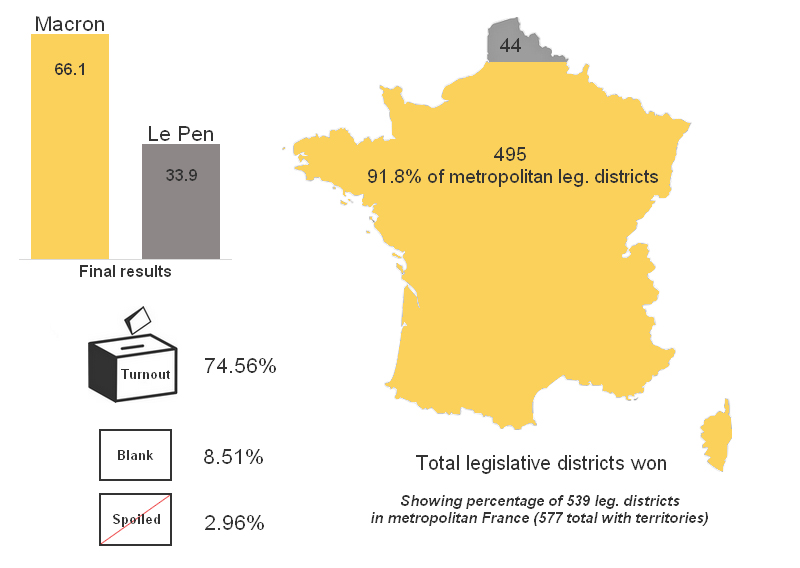 President Macron has nominated 46-year old center-right politician, and mayor of Le Havre, Édouard Philippe as his Prime Minister. Philippe is considered pro-business and socially liberal. The entire composition of the new French government will be unveiled on May 16.

President Macron’s next challenge will be the future composition of the French National Assembly, which will be decided in a two-round legislative election on June 11 and June 18. Without a majority in the National Assembly, Macron will not be able to implement his reform agenda. His former political movement, En Marche! (Forward!), has been rebranded La République en Marche and will field candidates for all 577 legislative districts, 52 percent of which will be from civil society (having never held elected office) and 50 percent will be women. It appears that the center-right party, Les Républicains, and Macron’s movement have the political momentum going into the legislative elections.