The poorest country in Europe, wedged between Romania and Ukraine, Moldova was part of the Russian Empire in the 19th century and most of it became part of Romania after the First World War before being incorporated as a republic of the Soviet Union in 1940. After declaring independence in 1991 after the failed August coup against Soviet President Gorbachev, tensions with pro-Russian separatist movements in Transnistria led to a brief conflict in 1992, which has remained frozen since a July 1992 ceasefire.

Moldova maintains close and historic ties to Romania, its top trading partner (with Russia a close second). The European Union is Moldova’s top export market (66% of the country’s exports go to the EU). In 2014, Moldova signed an Association Agreement and a free trade agreement (Deep and Comprehensive Free Trade Agreement – DCFTA) with the European Union, under protest from Russia, which retaliated with import restrictions on agricultural produce (Moldova’s biggest export to Russia). Moldova’s president, Igor Dodon, is pro-Russian and favors Moldova joining the Russian-led Eurasian Economic Union over the European Union. Moldova struggles with high levels of corruption, ranking 122 out of 180 on Transparency International’s Corruption Perceptions Index 2017. Moldova will have parliamentary elections no later than November 2018.

Russia has deployed “peacekeeping” troops in Transnistria since the 1992 ceasefire, totaling between 1,500 and 2,000 soldiers. The breakaway Transnistrian “military” is reported to have between 4,000 and 7,500 active troops, which are integrated into the Russian 14th Army (or Operative Group of the Russian Troops). Despite a 1999 commitment at the OSCE Istanbul Summit to withdraw these forces by 2002, Russia has maintained its military presence in the breakaway region and regularly organizes joint military exercises. The Kremlin also retains a large weapons depot in Cobasna, Transnistria.

Following the 2014 illegal annexation of Crimea and Russian military intervention in the Donbas, the Moldovan government banned Russian forces from crossing into its territory and prevented the Russian air force from landing in Chisinau, the capital. Moldovan intelligence services have asserted that people from Transnistria also have taken part in the conflict in Ukraine.


In November 2014, five months after the Moldovan government signed its Association Agreement with the European Union, three major Moldovan banks (Unibank, Banca Sociala, and Banca de Economii)—accounting for 30 percent of the banking sector’s total assets at the time—dramatically collapsed after $1 billion disappeared from their coffers. This banking collapse threatened Moldova’s financial stability, caused major public demonstrations, and ultimately led to the collapse of the Moldovan government.

How did this happen? 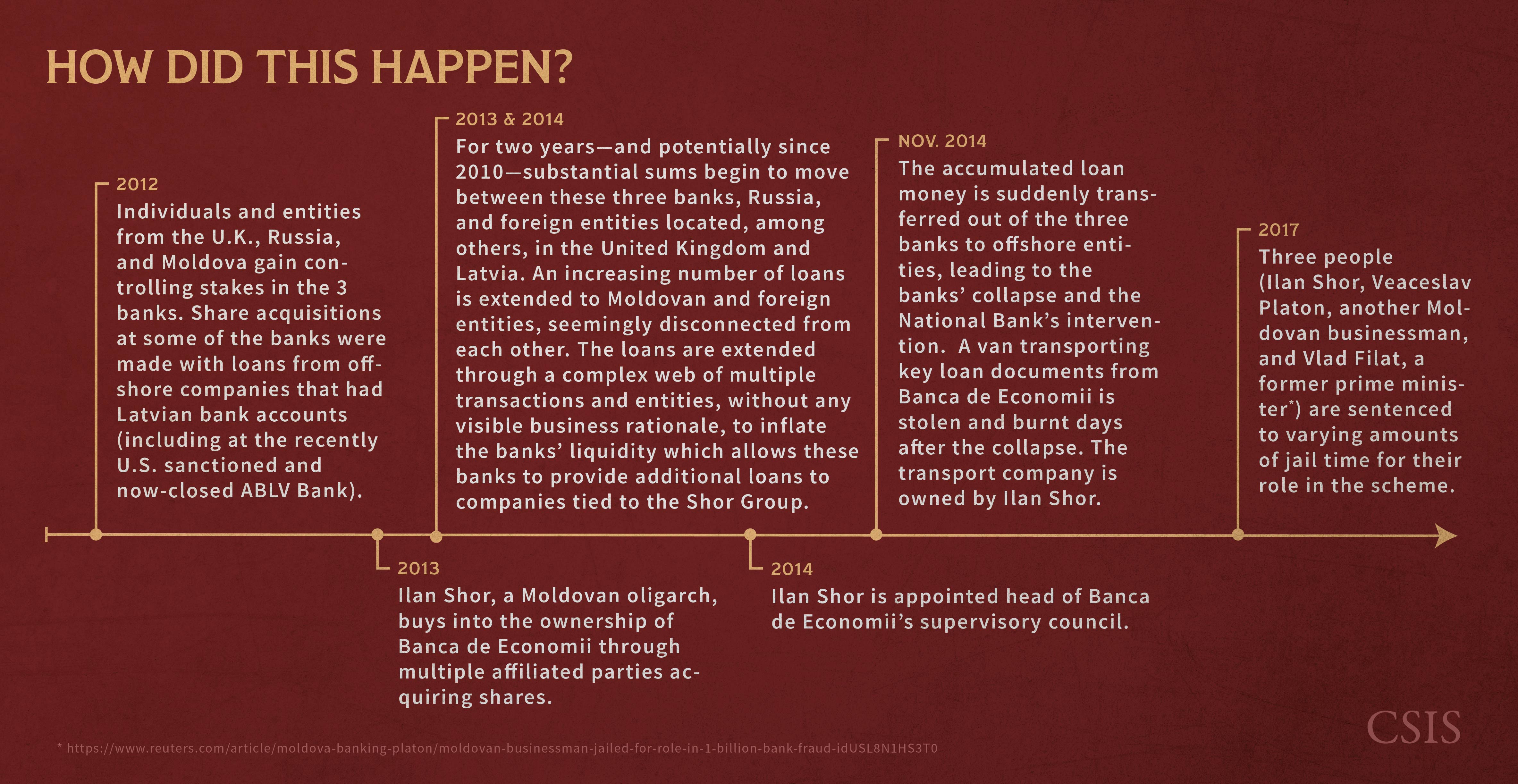 The Moldovan “missing billion,” as it has come to be known, had a disastrous impact on Moldova’s fragile economy, and was never recovered. The amount itself represented 15 percent of the Moldovan gross domestic product (GDP) at the time. GDP declined by 1.1 percent in 2015, though this was in part due to Russian trade restrictions and lower remittances. The Moldovan lei lost 20 percent of its value in early 2015. And 16 billion lei ($1.025 billion) worth of emergency loans had to be issued to prop up the three banks and protect their customers. The complex movement of money made it difficult for authorities to track; a post-investigation report found that “loans at one bank were paid off with loans from another and were then followed by yet more borrowing.”

To this day, the ultimate beneficiaries remain unclear although Shor, Platon, and Filat were charged for coordinating the activity. Excessive money laundering that exploits financial weaknesses in a country—including the infamous Russian Laundromat scheme that laundered $20 billion through Moldova between 2010 and 2014—can have disastrous consequences on a country while allowing malign actors to financially benefit. This is particularly true of small countries with fragile economies like Moldova. 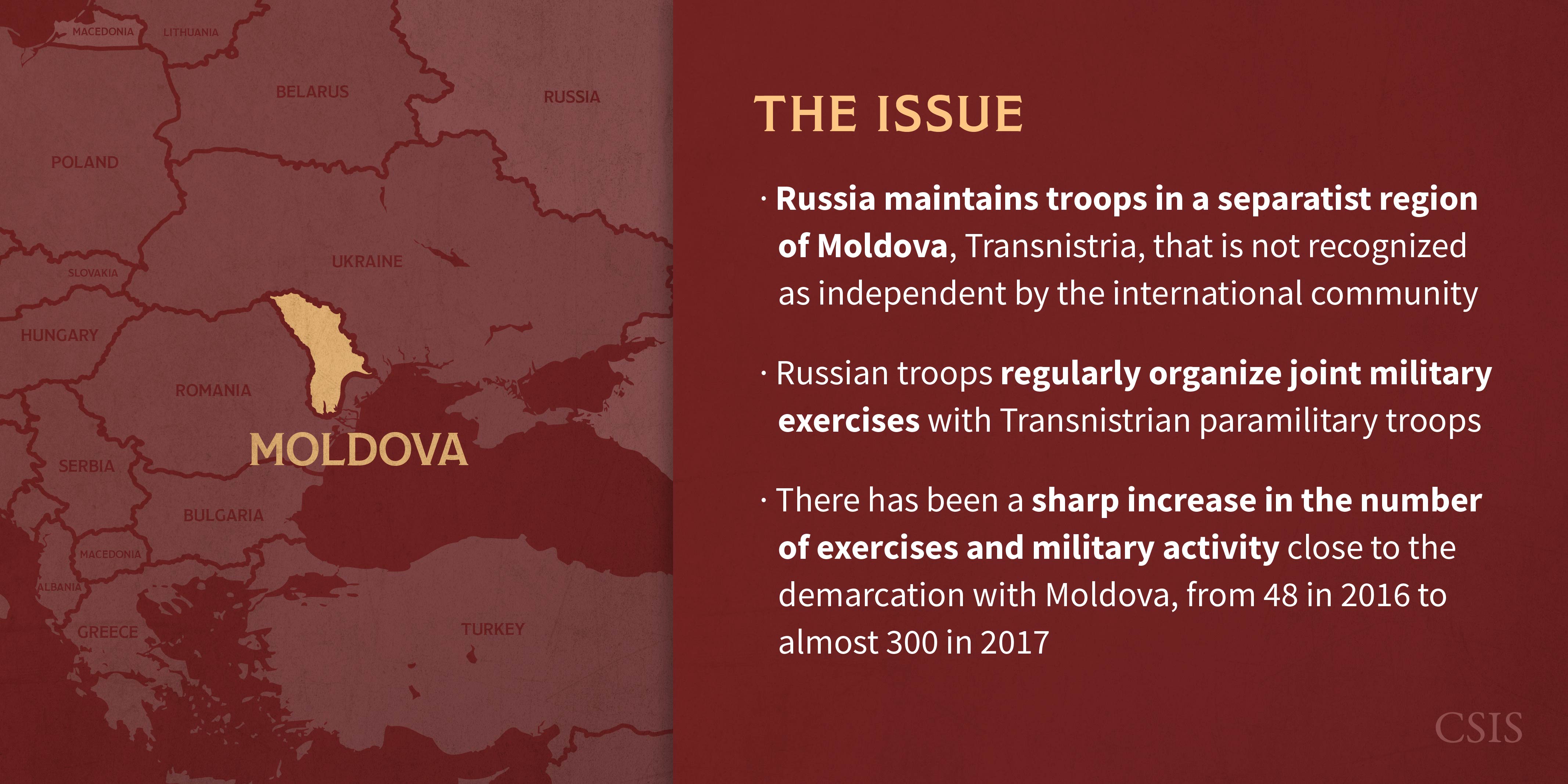 Joint Russia-separatist military exercises in Transnistria have recently intensified despite repeated requests from Moldovan, American, and European authorities for Russia to withdraw its troops. From just 48 in 2016, the number of Russian military exercises and activities jumped to over 150 (300 according to some reports) in 2017, including practicing the crossing of the Dniester River, which separates the region from the rest of Moldova.

Military exercises in Transnistria in early 2018.