Mandate of Heaven: Russian Orthodoxy and the Politics of National Identity

Over the past several months, Russian artists have found themselves subjected to heightened official scrutiny over allegations of religious blasphemy, often at the behest of vigilant clergy and Orthodox laypersons. The timing of this inquisition during a period of great geopolitical and socioeconomic uncertainty, paints the picture of a Kremlin leadership beset by ideological doubt, if not by existential uncertainty, over its break with the West over Ukraine.

On May 5, 2015, Andrei Anokhin submitted a draft law to the St. Petersburg Legislative Assembly that, if ratified, would mandate that cultural institutions submit scheduled exhibits and productions to a specially appointed committee of public officials and clergymen for review. Any work found to depict scenes of a sacrilegious nature would be obliged to carry a disclaimer alerting the public. This scheme is by no means unique in spirit to Anokhin. Ever since the Ministry for Culture of the Russian Federation fired the head of the Novosibirsk State Academy Opera and Ballet Theatre last March over a controversial production of Wagner’s opera Tannhäuser, conservative pundits like Elena Yampolskaya have increasingly demanded that authorities intervene in alleged cases of religious blasphemy by artists. Even Russian Culture Minister Vladimir Medinskiy has endorsed Anokhin’s proposal, thereby putting the Kremlin’s imprimatur behind efforts to establish grassroots reactionary movements affiliated with the Russian Orthodox Church as an arbiter of cultural production.

For some analysts the political fallout from the Tannhäuser episode portends a regression to Soviet patterns of social and political control. Yet it represents arguably less a return to the centralized, top-down censorship of the Soviet era than the mobilization of ultraconservative Orthodox activism as a means of monitoring Russian society from within. According to theater columnist Marina Davydova, this “total conservative revolution” has tended to express its indignation through "scribbled commplaints [to] authorities." Even so, deepening affinity between radical Orthodox laity and the Kremlin threatens to obscure where popular outrage ends and official censorship begins. Remarks literary publisher and Kremlin critic Irina Prokhorova, “Who are [these] believers? What do they believe in? No one talks about this.”

Dating back to the first years after the Soviet collapse, Orthodox activists have found a sympathetic ear in the Russian state. Although the convergence of the Kremlin and the Russian Orthodox Church is a recurring dynamic throughout Russian history, the post-Soviet iteration of this relationship is especially unique for its preoccupation with provocative art. In 1998, for example, authorities charged artist Avdey Ter-Oganyan with ‘incitement to religious enmity’ in response to popular outcry over a performance in which he had despoiled reproductions of several Orthodox icons. In 2003, a pair of Orthodox activists destroyed several works of art on display as part of an atheism-inspired exhibit at the Moscow Sakharov Center for Human Rights: criminal charges against the two accused were subsequently dropped in court.

Whereas in the 1990s, the Kremlin would have turned a blind eye to this sort of hooliganism, today it seems to be actively working with the Orthodox Church to remold the cultural landscape. A possible explanation for this shift towards active cooperation is that state and Orthodox elites increasingly see a common threat to their authority in the songs of Pussy Riot, or the films of Andrei Zvyagintsev.

Whatever the case, in recent months the Kremlin has made definite moves to codify its alliance with the Orthodox Church. The so-called Basics of State Cultural Policy, promulgated with President Vladimir Putin’s approval by the Ministry of Culture last December, codifies the “special role of Orthodox Christianity” with regards to “the consolidation of the unity of Russian society,” and cautions that “no experiments with form can justify the substance that contradicts the values traditional for [Russian] society.”

Based on its emotive appeals to the preservation of traditional values, not to mention its protestation that “Russia is not Europe,” some commentators have elected to read this text as the definitive codification of Putin’s break with the Western liberal tradition. The State Cultural Policy does not, however, limit itself to a rejection of Western values. It also posits a vision of Russia’s post-Soviet national identity grounded in past history and Orthodox spirituality.

The contours of this approach first became apparent in the wake of the Crimean annexation. In a speech from March 2014, Putin celebrated Russia’s takeover of the peninsula by proclaiming that, “Everything in Crimea speaks of our shared history and pride.” Several months later, during an address to the Federal Assembly, Putin elaborated upon this theme by claiming Crimea as “the spiritual source of the development of a multifaceted but solid Russian nation and a centralized Russian state.”

This seems to have been the intention of the State Cultural Policy’s original author, the presidential adviser on culture Vladimir Tolstoy. When Tolstoy presented his preliminary draft to Putin in April 2014, he spoke of culture as that which serves as “the basis for one’s identity, the foundation for the national character, even the foundation of the state.” As if to clarify this sentiment, Putin himself likewise asserted that “What is important is self-identification, what people think of themselves, what basic principles had been laid in them since childhood.” The Basics of State Cultural Policy document itself recognizes the “vast educational potential of culture [in] the process of identity formation,” and propounds moreover that the “historically established role of culture as a vehicle for the transmission and reproduction of traditional Russian values [as] a source of civic identity.”

Based on the textual evidence available, the aim of the State Cultural Policy is not to control individual expression as such, but rather to reframe certain cultural narratives as “acceptable” and “unacceptable." In particular, it champions a conventional view of Russian history and culture to the exclusion of “non-traditional” perspectives; so much at least is articulated in the text’s affirmation of the “right of society to preserve the tangible and intangible cultural heritage of Russia.” Insofar as it confers formal political legitimacy to “traditional” values, the State Cultural Policy informally deputizes traditionalist groups to monitor Russian culture. The timing of this enfranchisement of traditionalist movements and the Church attests to the severity of the Kremlin’s ideological insecurity amid its current standoff with the Euro-Atlantic community over Ukraine.

This campaign is not without precedent. Russia’s cultural history since the 19th century has been characterized by a competition pitting traditional notions of collective belonging against the more individualistic mores of Western liberalism. The Basics of State Cultural Policy makes sense in the context of this long-running competition. It promises to restore cultural and social cohesion lost after the Soviet collapse based on examples from Russia’s pre-revolutionary history. Russia’s fallout with the West over the Ukrainian crisis has given renewed impetus to this ‘revival,’ inspiring the Kremlin with the confidence to contrast Russia’s cultural identity overtly with that of Europe and America.

This new ‘official’ culture is in many ways a clever trick of smoke and mirrors. As Lilia Shevtsova of the Carnegie Moscow Center notes, the so-called ‘traditional values’ that are being offered today by the Putin administration are little more than the simulacra of social customs that were uprooted last century amid the turmoil of the Revolution, Civil War, and Stalinism. Thus, Shevtsova maintains, “What Putin’s elite tries to offer Russia are not the traditional values, but their imitations, semblances that can only discredit the new values of freedom, solidarity, and mutual help that have started to take root among some segments of the Russian population.” Bereft of an immediate national identity with which to mobilize Russian society, the Kremlin has fashioned ideological instruments from institutions like the Orthodox Church that help to reinforce the established political order by appealing to their inherent historical and cultural cachet.

This politicization of Orthodox values is somewhat ironic in that most Russians are fairly indifferent to organized religion. Even so, the most recent (2008) Pew study on religious attitudes in Russia found that while only 7 percent of respondents “attended religious services at least once a month,” 56 percent claimed to “believe in God,” but a full 72 percent self-identified as Orthodox Christian. That the Kremlin should undertake to align itself so overtly with the Orthodox Church strongly indicates that Vladimir Putin feels he can no longer secure domestic political capital through personal populism alone, and must therefore work to recast his legitimacy by appealing directly to those institutions that most emphasize Russia’s political and cultural distance from the West.

Allen Maggard is an intern with the CSIS Russia and Eurasia Program. 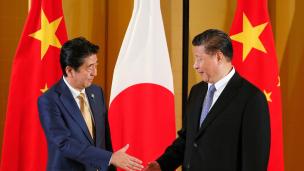 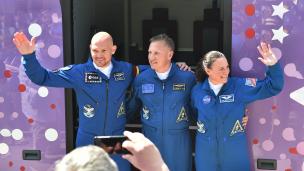 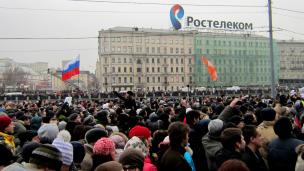 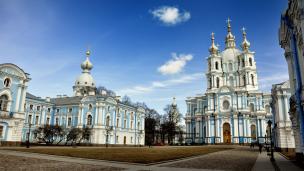 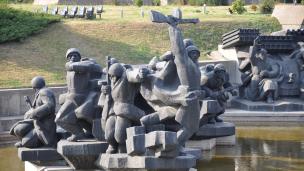 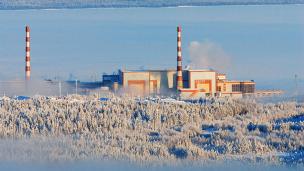 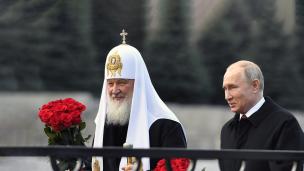 Russian Malign Influence in Montenegro: The Weaponization and Exploitation of History, Religion, and Economics
By Heather A. Conley
May 14, 2019
On Demand Event 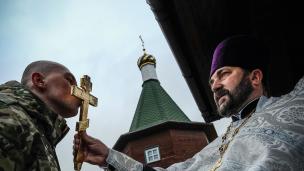 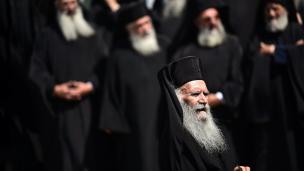 The Orthodox Schism in the Shadow of Empire
October 19, 2018
Commentary 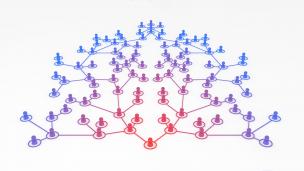 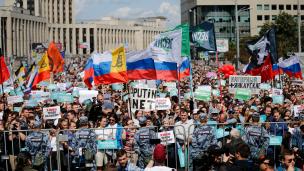 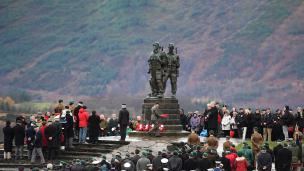 A Century after the Armistice, the World is Still Coping with the End of Empires
November 13, 2018
Newsletter 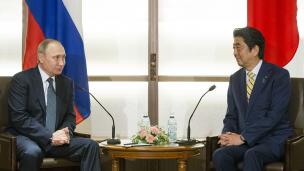 RESOLVED: Japan Could Play the Russia Card Against China
March 12, 2019