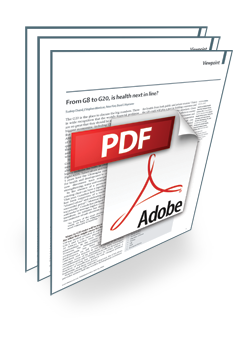 The G20 is the place to discuss the big numbers. There is wide recognition that the world’s financial problems are so great that they should be addressed by the world’s biggest economies, including China, India, and Brazil. But can the G20 take on health as well as the economy? Although the G8 has played a major role in the doubling of funding for global health over the past 10 years, some question its future. In the meantime, G20 states have their own ideas about what they should be advocating and supporting. So who should set the priorities and where should they do it?

Still very much alive, the G8 group of Canada, France, Germany, Italy, Japan, Russia, UK, and USA will be meeting again on June 25 in Muskoka, Canada. More about political authority than implementation, the G8 legacy includes the birth in 2000 of the Global Fund to Fight AIDS, Tuberculosis and Malaria in Okinawa, Japan. 5 years later the Gleneagles summit brought financing for health and development to centre stage. Since then, new discourses have emerged on health systems strengthening, water and sanitation, and food security.

We also encourage you to attend or live stream our upcoming event with the Kaiser Family Foundation, "The G8 Muskoka and G20 Toronto Summits: Health and Development Outcomes."

The Highlights and Implications of the G20 Energy and Environment Ministerial Meetings in Japan
By Jane Nakano
June 24, 2019
Newsletter

Guyana at Risk: Ethnic Politics, Oil, Venezuelan Opportunism and Why It Should Matter to Washington
January 8, 2019
Newsletter

The Evening: Kurds in Syria, Sanctions on Chinese Officials, Spirit of the Radio and More
October 8, 2019