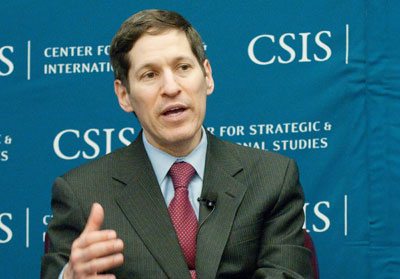 Dr. Thomas Frieden, Director of the Centers for Disease Control and Prevention (CDC), came to CSIS yesterday to discuss the new CDC Center for Global Health and the role it will play in a long-term U.S. strategy like the one laid out by the CSIS Commission on Smart Global Health Policy.

Dr. Frieden described one key focus  of the new Center for Global Health as the use of data to manage programs and strengthen governance. He emphasized the power of evidence to motivate policymakers and guide wise investments, and he argued that building countries’ capacity is essential to collecting and making use of data. “There are no shortcuts,” the Director said. “We have to build government health capacity.”

Building a solid evidence base and good statistical capacity, explained Dr. Frieden, starts with vital registration: Documentation of a person’s existence is a human rights issue and is necessary to measure the true impact of public health interventions. CDC will also work to strengthen ministries of health and increase the number of epidemiologists to 1 for every 200,000 people. “The Field Epidemiology Training Program,” said Dr. Frieden, “may be the single most important thing CDC does in global health.”

The talk also highlighted the growing importance of chronic disease in the developing world. Countries that receive assistance from the United States, he argued, rightly expect a plan that goes beyond infectious disease. He credited political leadership for Uruguay’s tobacco control program, which he held up as the world’s best. In his discussion of tobacco, he called for wider implementation of the World Health Organization MPOWER package of policies, including smoke-free workplaces, hard-hitting warnings, restrictions on advertising, and substantial increases in tobacco taxation.

Citing the Commission’s report, Dr. Frieden made a number of arguments for greater U.S. involvement in global health. If H1N1 had been discovered in Mexico two months earlier, he said, the vaccine would have been available in the United States before the disease peaked—saving thousands of lives. He described the “smart power” and diplomatic benefits of greater health investment abroad.

More than anything,  however, he argued that global health work was simply the right thing to do. “Saving lives,” he said. “When they can be saved easily and with the minimal necessary investment, we have a responsibility to do it.”

Watch the full video of this event below:

An Ounce of Prevention is Worth a Pound of Cure
By Anna Carroll, Samantha Stroman
October 24, 2019
Critical Questions