Lord Cuomo, We Will Not Be Your Lab Rats: Anti-Vaxxer Appropriation of #BlackLivesMatter and #Reopen Protests

The global pandemic is a new opportunity for the anti-vaccination community, also known as anti-vaxxers, to recruit followers. Americans resistant to public health restrictions minimize the severity of the coronavirus or question its existence entirely. The Trump Administration’s effort to develop a vaccine, imprudently titled “Operation Warp Speed,” is fodder for the movement’s skepticism of vaccine safety and the pharmaceutical industry. Anti-vaxxers warn of government overreach through policies mandating vaccines, contact-tracing, and mask-wearing.

The Black Lives Matter and Reopen protests have seized the attention of the anti-vaccination community, despite the divergent ideological underpinnings of the two movements. The online activism and media attention sparked by the protests offer a new platform for the anti-vaccine message as anti-vaxxers anticipate a looming battle against a coronavirus vaccine.

The anti-vaccine community historically has behaved like a boggart, the dreaded shapeshifter of English folklore, skillfully appropriating elements of salient political causes to gain followers. Adopting the language of other movements to amplify an ideological platform is known as “cause-stacking.” Anti-vaxxers are largely unique compared to other causes because they borrow messaging from the left and right. For example, anti-vaxxers previously have co-opted anti-science sentiment on the right and themes from the pro-choice movement on the left.

The Black Lives Matter and Reopen protests also lie on opposite sides of the political spectrum. Crucially, however, the two protests are not equivalent. The Black Lives Matter movement is a widespread and diverse response to institutionalized racism and police brutality. The much smaller Reopen protests draw from a mainly suburban and white population that objects to restrictions intended to slow the spread of coronavirus.

Despite efforts to counter anti-vaccine rhetoric, the movement has flourished since the nineties. The growth of social media has provided fertile ground for vaccine misinformation to spread faster than experts can counter it with pertinent corrections. Anti-vaccine messaging encompasses a variety of ideas, ranging from distrust of medicine and the pharmaceutical industry to absurd conspiracy theories, including conjecture that Bill Gates uses vaccines to inject Americans with microchips. Currently, Reopen protesters claim that coronavirus was created in a government lab or blame 5G radio waves for spreading the disease.

Hoax theories about the virus galvanize opposition to state-imposed lockdown measures, which in turn have incited protests among Americans who deny the Covid-19 threat. The anti-vaccine community joined this movement early on to express skepticism of the government and public health organizations. Throughout May and June, the online anti-vax community boosted the message of Reopen protesters along with vaccine hoaxes and misinformation, frequently tweeting variations of the hashtag #Reopen or #ReopenAmerica. Often these posts featured anti-vaccine and anti-mask sentiment, including hashtags such as #NoVaccine, #NoMask, and #plandemic, the name of a recent hoax film claiming that coronavirus is a government project. Prominent anti-vax pages on Facebook, including Revolution for Choice (140K followers), March Against Monsanto (1.46 million followers), and Freedom Angels Foundation (16.5K followers) made posts supporting the Reopen protests. Many of these posts connected stay-at-home restrictions to potential mandatory vaccinations and enforced mask-wearing. In fact, anti-vaxxers increasing oppose wearing masks, arguing they violate individual liberties, fail to prevent exposure, or endanger users’ health. The campaign against masks both resonates with and exploits the anti-vaccine community’s resistance to imposed health intervention.

On the left, anti-vaxxers are particularly savvy at co-opting the online momentum of the Black Lives Matter movement. Since the #BlackLivesMatter hashtag began trending after the tragic murder of George Floyd on May 25, there has been an uptick in anti-vaccine tweets including that hashtag or a manipulation of it, such as #BabiesLivesMatter or #VaccineInjuredLivesMatter. Examples abound on Twitter and Facebook (Instagram has far fewer examples, probably due to the site’s stricter content moderation practices).

On May 31, Twitter user @Charbrevolution, with over 7,000 followers, tweeted a link to an article on an anti-vaccine website about a Black infant who had died. The tweet read, “Did this little boys life not matter? A beautiful little black baby dies after vaccines. Where are the protests? Where is the outrage? #BlackLivesMatter.” A week later, prominent anti-vaccine activist Sheri Tenpenny tweeted, “Whose #protesting for our babies? Whose going to the #frontline for to be a voice for our children? We’ve got to protect these kids!  #VaccinesAreNotTheAnswer #ChildrensLivesMatter.” Another user with 2,163 followers suggested Bill and Melinda Gates are trying to endanger Black people with a coronavirus vaccine, using the trending hashtags #ExposeBillGates and #BlackLivesMatter. On the same theme, one of the groups that vocally supported the Reopen protests posted a racist meme featuring a Black boy and the text, “we ain’t takin no vaccine from some shady ass nerd.”
Other anti-vaxxers invoked the sentiment of the protests. Darla Shine, an anti-vaccine influencer with over 22,000 followers, tweeted a scene from a rally depicting a Black Lives Matter poster next to a sign that read, “Lord Cuomo, We Will Not Be Your Lab Rats.” The next day, the Massachusetts Freedom Coalition, an anti-vaccine group with 1,075 followers on Facebook, replied to a pro-Black Lives Matter tweet by Rep. Jack Lewis. Their tweet read, “Discrimination is never ok. Hate is never ok…Or do we have to loot & riot in the streets, too? Our dead is a long list.” Notably, the Freedom Coalition account was dormant between February and June, when Black Lives Matter protests were becoming widespread. One of the account’s first June posts stated, “Vaccine Mandates are Genetic Discrimination.”

Throughout June, anti-vaccine supporters co-opted the slogan “Defund the Police,” a central theme of the Black Lives Matter movement. One meme reads, “If #BLM protesters can demand we defund police over the death of one black man…then why can’t “Vaccine Injured Lives Matter” protesters demand we defund corrupt “public health” agencies like #CDC over the vaccine induced deaths of countless black (and other) children?” Another meme also targeted the CDC, stating that “no agency has hurt or killed more African American boys in the last 3 decades. Other posts opposing vaccines employed the hashtag #DefundTheCDC. Remarkably, this moment is not the first time anti-vaxxers have appropriated anti-racist protests. In a gross manipulation of the civil rights movement’s values, a majority-white crowd protested vaccinations last year by singing “We Shall Overcome,” an anthem of the civil rights movement, and yelling “no segregation, no discrimination.”

America’s legacy of medical racism has contributed to vaccine skepticism among Black people – an issue that is especially urgent given that Covid-19 disproportionately affects people of color. While white anti-vaxxers tout parental choice and ‘natural’ health, many Black Americans harbor distrust of medicine after suffering appalling negligence and unethical treatment. A key example is The Tuskegee Study of Untreated Syphilis in the African American Male. For that experiment, researchers pretended to treat Black men suffering from syphilis, but instead withheld care to study the disease. One anti-vaccine meme cites Tuskegee as an example of corrupt vaccine practices, inaccurately stating that the government purposefully injected syphilis into Black subjects.

Perhaps the most notable feature of the anti-vaccine movement is its ambivalence to the politics of the causes it chooses to exploit. That leads to unlikely marriages of disparate movements. For example, at a June 3 protest against vaccines in Iowa, a Republican politician ridiculed mask-wearing, while simultaneously arguing that Black Lives Matter, Antifa, and anti-vaxxers should collaborate. This practice helps anti-vaxxers appeal to a broader audience. Meanwhile, the movement’s crafty use of hashtags helps boost the visibility of their content for their target demographic.

Fighting the dexterity of the anti-vaccine movement demands institutional and technological responses. Slowing the spread of anti-vaccine sentiment online requires that social media companies implement policies that block misinformation about vaccines, while magnifying accurate information and authoritative sources. Part of this effort should address anti-vaxxer cause-stacking strategies. For example, public health institutions and tech platforms could collaborate to develop content moderation algorithms that can distinguish between posts that use hashtags and keywords with integrity versus those that exploit politicized language to amplify anti-vaccine sentiment. Government and public health officials need to step up their social media game to target different “constituencies” in the same manner as anti-vaxxers. That will require hiring experienced digital strategists that can employ hashtags and web analytics effectively. Lastly, the problem does not lie with technology and information alone. Public health officials must address the roots of Americans’ distrust toward healthcare, especially within communities that have long been marginalized by the medical field.

Maggie Tennis is a graduate intern with the Technology Policy Program at the Center for Strategic and International Studies in Washington, DC. 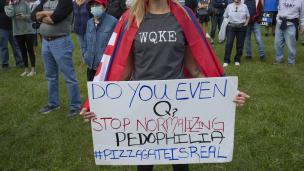 No One is Immune: The Spread of Q-anon Through Social Media and the Pandemic
In Strategic Technologies Blog
December 17, 2020
Transcript 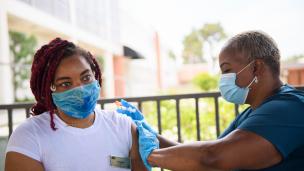 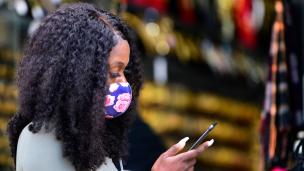 Online Event: Trusting a COVID-19 Vaccine: The Role of the Media and Misinformation
January 29, 2021
Transcript 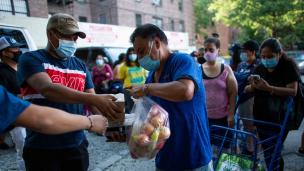 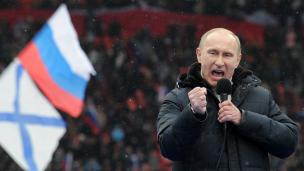 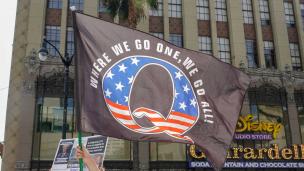